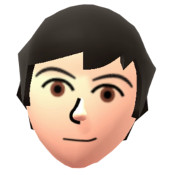 How was last Christmas for you? Well, mine sucked. Don’t get me wrong, I got some nice presents and it was a generally enjoyable day, but all t 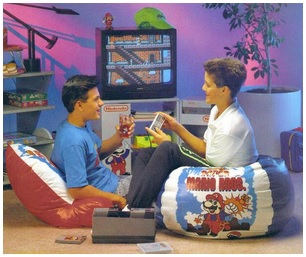 hat was sullied by a certain gag gift from someone who will remain nameless in this article. I like to think I have some sense of humour, this same person has gotten me such enjoyable titles as “Imagine: Girl Band” and “Deal or No Deal DS”. I messed with them, had a good laugh at how rubbish they are, and recounted my experience to him for the sake of entertainment. It’s all in good fun and a little part of me looks forward to seeing what dreck he gets for me at the end of the year. 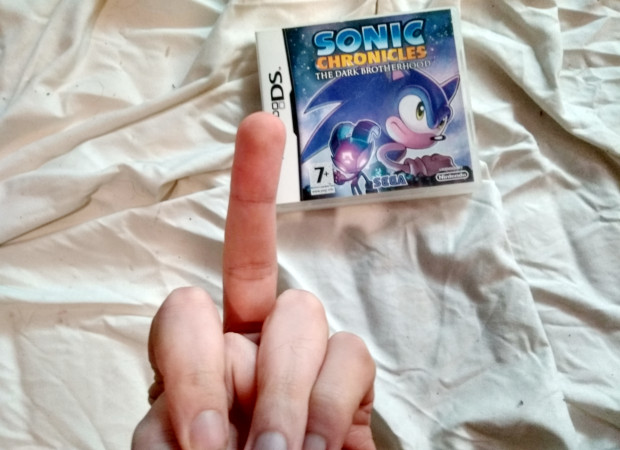 And then he burned all that goodwill.

Pictured above is “Sonic Chronicles: The Dark Brotherhood”, an RPG set in the Sonic universe made by Bioware of all companies. I realise that as I type that down, it sounds like a decent concept on paper. The Sonic series has plenty of characters spanning a wide variety of animals to take inspiration from. Whether you actually like them is irrelevant, the point is that it’s not a bad series to build an RPG off of.

Those were my thoughts back in 2009, when I stumbled upon a used copy of the game for 5 pounds. “Why not?” the naïve fool said to himself shortly before picking it up. About 2 weeks later, I traded it in for 7 pounds and still felt ripped off. And yet, in 2019, as I sat there looking at my latest “hilarious” present with what I can only imagine was a look of utter despair, I vowed to myself that I wouldn’t let this game beat me a second time, I was going to finish it and give it the scathing analysis it so richly deserved. Because short of making a time machine and stopping myself from making that initial mistake, this was the next best way to get some closure on the matter.

It’s worth noting that Sonic Chronicles has a really fascinating controversy involving Archie Comics of all things. When you finish up here, it might be worth checking that out. I’m sure it provides a bit of context to the ultimate fate of this spin-off and I can personally guarantee that it’s more fun than actually playing this travesty.

You play as Sonic, obviously. He’s been on holiday after foiling another one of Eggman’s plots but when he gets back, he finds that Green Hill Zone is full of rampaging animals and familiar Egg robots. Sonic suspects that Eggman is back at it and goes off to stop him or something. Alright, there’s more to it. But I quickly stopped caring, there’s some nonsense about a lost Echidna tribe and alien invaders, but it’s all so dull that it’s hard for me to keep track. There are way too many moments when you’re expected to know something from another Sonic game, and even stuff from the Archie Comic series of all things! To the average player, nothing has any context, and it’s just a big mess. Matters aren’t helped with the overly serious tone the whole game has. Sonic is not a series that should take itself that seriously, you only have to look at super edgy spin-off “Shadow the Hedgehog” to know it doesn’t work. Unfortunately, Sonic Chronicles’ plot can’t even be enjoyed in an ironic sense. It’s too grim and drab and doesn’t gel at all with the general vibe Sonic games are known for.

It really says a lot that, near the beginning, Vector the Crocodile is introduced, delivers one line, and then is never seen again for the rest of the game. He clearly had the good sense to realise that the game he was in was awful and had to bail before his reputation was ruined. I always knew Vector was the best character in the Sonic universe and now I have irrefutable proof. Which is the only good thing I can take away from this game.

Gameplay involves running around a number of areas, fighting enemies you encounter, and advancing the plot. Even outside of battles, there are glaring problems. The entire game is controlled by the touch screen, even movement. It’s analogue movement as well, so you’ll experience all sorts of moments where you need to go to the edge of the screen and slow down to a crawl because Sonic is too close to your stylus. Speaking of slow, Sonic can’t even outrun a lot of the enemies you encounter! Sonic! The character all about moving his legs really fast! Find an enemy in a narrow enough passage and you’re fighting them. Things aren’t much better in more open areas. The game has an isometric viewpoint, but the environments are so flat, it’s impossible to get some kind of idea of depth in this game, and when you couple that with the confusing, maze-like areas, just getting to your goal is an ordeal. 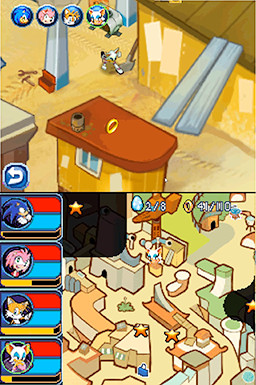 Is that plank on ground level? I honestly couldn't tell you.

And then there are the battles… Oh lord, the battles! They are pure torture! Each character has a basic attack and a number of skills unique to them, which is pretty typical of an RPG. One of the many issues is that the basic attack is almost completely useless. It will most likely miss your target, so in order to make any meaningful progress; you’ll need to use those unique skills to do some damage. Shame that using them a couple of times will completely deplete the PP needed to perform those moves.

To pile on to this, each of these moves involves a series of touch screen inputs to make them more effective. They function similarly to the kind of stuff you do in Elite Beat Agents, and I can only apologise for sullying Elite Beat Agents by using it to describe something in Sonic Chronicles. Oh, and some of the more useful moves involve elaborate patterns of touching that will make the move completely fail if you miss one tap. And you still lose the PP for that move, just for that extra middle finger! Seriously, if you want to play an RPG and are thinking of playing Sonic Chronicles, just play Elite Beat Agents instead. No, it’s not an RPG, but I’d still easily recommend it in that scenario.

I can’t stress this enough, the resources for attacks are pitifully low. Even by the end of the game, using a Power Move three times left me with nothing, forcing me to defend and painfully do nothing while I took hits, waiting for that PP to slowly refill. This is compounded by the uselessness of most of your party members. There’s 11 characters that can make up your party, 8 of which are painfully weak (that includes Sonic). The other 3 include Eggman, who ditches you halfway through the game, and then there’s Cream and Omega, who are both optional and permanently missable. Luckily, I got them both, so it was somewhat more bearable to trudge through the game. Well, until I got to the last dungeon and was forced to use 2 parties of 4. That particular dungeon took me around 5 hours, because for some reason, someone thought an underwater section that prevents you from using your only viable means of attack would be a lot of fun. 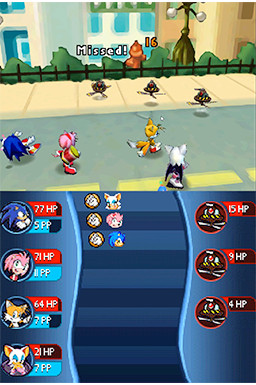 With the amount of times you miss, you'll start suspecting Sonic was drunk. Which would explain a lot.

The majority of RPG frustration can normally be alleviated by good old fashioned level grinding. Sonic Chronicles, in its infinite void of terrible gameplay decisions, severely limits the amount of experience you get from fights when you get a little overleveled. 10 experience points per fight in a game where you’d need around 10,000 to level up is not a fun time for anyone.

Right, that reminds me of the nonsense with stats! Quick question: What do you think the “Attack” stat does? Nope, you’re wrong, it affects accuracy. And it only affects the accuracy of the basic attack, which means it’s a worthless stat and any points you invest in it go to waste. In a similar vein, Defense affects your evasion. Instead, the power of your attacks is depicted with the “Damage” stat, which you can’t actually see. You just get a vague sense of how high it is depending on what the description of equipment says. Speaking of that, money is tight as well. So don’t think you can buy your way to the end.

If you had to ask me what the best thing about Sonic Chronicles is, I guess I’d say the graphics. That’s giving it way too much credit. Like I mentioned before, the visuals actively impede your progress and they’re not exactly good looking to begin with. It’s that kind of not great looking 3D that quite a few DS games had at the time, and it aged about as well as you expect. Dialogue decided to go with the kind of 2D art you’d see from Sonic boxes and, while much nicer looking, also serves to show up the rest of the visuals.

The sound is offensive, simply put. Stock sound effects that I can only assume were placeholders are abound in this game. Cartoon spring sounds play when someone gets knocked out. Well known Sonic characters have voice clips that don’t sound anything like they should. Oh, and Knuckles shares his voice clips with the rock aliens, just saying. The music doesn’t fare much better. Awful, repetitive songs plague you throughout with grainy quality rubbing your ears raw until you decide to boot up Smash Ultimate just to listen to better Sonic music. Yes, I did that plenty of times.

And just for the final perfect topping to the crappy feast that Sonic Chronicles provides, the whole game ends on a sudden cliff-hanger. Yes, that’s a spoiler, I don’t care and neither should you. After the struggle of playing this for as long as I did, the sheer audacity of ending on an unsatisfying cliff-hanger after the utter rubbish that preceded it was insulting. And just to add salt to the wound, Sonic and Tails demolish the fourth wall out of nowhere to chat about how the ending comes out of nowhere, and then go on to chat about the people who made the game. Including a strange remark where they mention someone who had to move on to a Dragon Age title before this game was done. No, really. Not making that up. 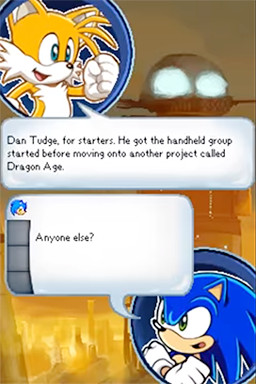 He had the right idea, I wish I was smart enough to follow in his footsteps.

Just a heads up, this never got a sequel. So that’s a story that won’t ever conclude, which annoys me more than it should.

But I did it, I finally finished Sonic Chronicles, and it’s just as horrible as I remembered. There’s a strange satisfaction with finally exorcising this demon from my backlog. For me, it’s quite frankly the worst Sonic game. Yes, I know Sonic ’06 exists, and technically speaking, that’s an even bigger train wreck. But at least with that particular monstrosity, you can easily have a good laugh at how broken the whole thing is. Sonic Chronicles is just a miserable time that could have been actually OK. I can’t be certain why this is the case. It wouldn’t shock me if there were all sorts of problems during development that would impact the quality of this game. It’s an unfortunate mess of a game whose only positive aspect is that I like Vector a lot more now. That dude has taste.