Nintendo has announced some big changes are coming to their mobile Mario Kart this September!

Tour is host to the most impressive selection of characters of any Mario Kart title, with adorable and wild alternative costumes to your favourite faces, such as a samurai Mario, a kimono wearing Daisy and a retro 16-bit styled DK Junior. As well as these impressive alternate costumes are beloved characters missing from Nintendo’s flagship Mario Kart 8 such as Diddy Kong, Dixie Kong and er, King Bob-Omb – but there has been a big and rather controversial pimple on its otherwise perfectly sculpted noggin, and that comes in the form of gacha mechanics.

The problem most people have had with this stellar collection of characters is that you can’t purchase the ones you want individually, and instead have to rely on iconic Mario pipes, which are pulled to reveal random karts and characters. The amount of pulls you get depends on how many gems you are willing to spend, which are obtained via in-game missions and real life cash. With some characters appearing in pipes filled with 100 items - the one you want plus 99 other tickets/karts/gliders - it promoted continued use of pipes in what some could consider a form of gambling. 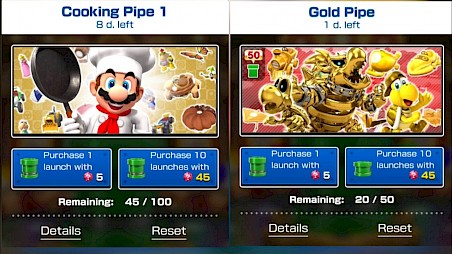 Nintendo is now opting to offer characters and karts via an in-game shop, which will still use the aforementioned gems but will no longer force you into randomised pipes – a change we are sure will please many gamers put off by what are often considered predatory mechanics.

As well as this big change in how characters and karts are purchased, a brand new battle mode is set to arrive at the same time, which right now is set for late September.

Mario Kart 8 recently saw the release of the Booster Course Pass, a selection of 48 new tracks for Mario Kart 8 ripped straight from Mario Kart Tour, including the new, once exclusive ‘Tour’ levels such as New York Minute.