198X is something of a love letter to the gaming culture of the 1980s.

While this is hardly surprising given the title of Hi-Bit Studios’ kick-started project, the execution is a wonderful fusion of retro-inspired music and stunning pixel art, reminiscent of the era, blended with a relatable story that helps weave together five distinct genres.

The first genre represented is a 2D scrolling beat-em-up to pull at the heart strings of fans of classics such as Streets of Rage and Final Fight.

Beating Heart tasks you with punching and kicking your way through a limited variety of enemies, smashing phone boxes and bins to uncover food and drink to replenish health along the way. 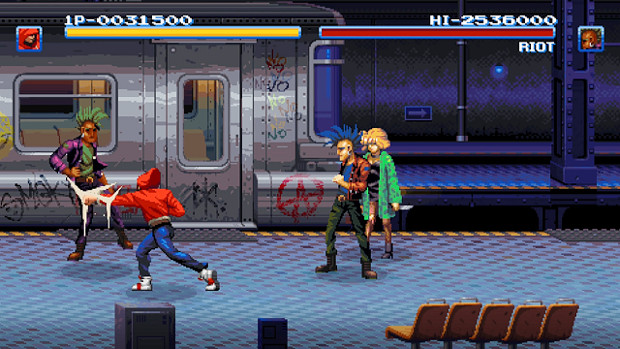 Oh look, it's 'Streets of Final Rage Fight', that famous Beat 'em Up from the Nineties.

As an introduction to 198X, it works well, but just as you feel like you’re getting into Beating Heart and progressing towards an expected end of level boss, the camera pans up, leading you to the next part of the story.

As it unfolds, we follow our protagonist Kid’s journey of discovery. Stumbling upon an arcade in the suburbs, Kid’s eyes are opened to the multitude of mesmerising worlds to explore, all merely a credit away.

As Kid escapes the realities of real life, we’re lead into Out of the Void, a 2D shooter in the vein of R-Type. With enemies to blast down, power-ups to collect and obstacles to avoid, Out of the Void proves to be a highlight of the 60-90 minute duration of 198X. 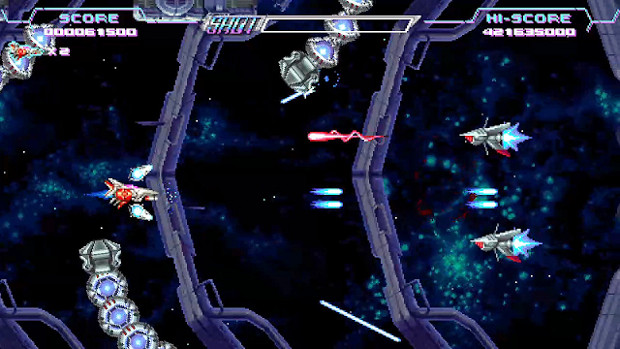 The Runaway follows with more than a subtle nod to racers like Outrun and Top Gear. From the adrenaline-fueled highs of the previous game, The Runaway comes across as something of a disappointment. The general lack of pace or challenge as you plod through the first section is a far cry from the speed associated with the aforementioned Outrun while the second portion plays out more like a cutscene as you drive along without danger for over 3 minutes while Kid narrates.

While the feelings that are portrayed are ones that we can all empathise with, the overarching story never feels like it quite cuts deep enough to make a significant impact. It could be argued, however, that it doesn’t need to. 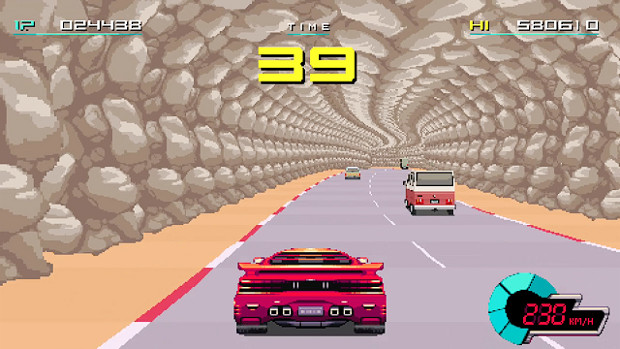 Clearly this arcade game gets its inspiration from Outrun, but it isn't quite 'The Runaway' success.

Shadowplay comes next, combining the sword swinging and platforming action of Shinobi with an autorunner as you slash enemies and avoid attacks. As you navigate several stages, including a boss encounter, you’ll be hopping between the top, middle and bottom thirds of the screen to collect orbs and avoid incoming obstacles and threats.

If Shadowplay serves as another of 198X’s highlights, Kill Screen closes the game out in underwhelming fashion. With a task of killing three Dragons, the locations of which are displayed with red dots on a mini-map in the corner of the screen, you’ll explore narrow hallways and partake in turn-based battles against a small selection of foes with a blue grid for a backdrop. 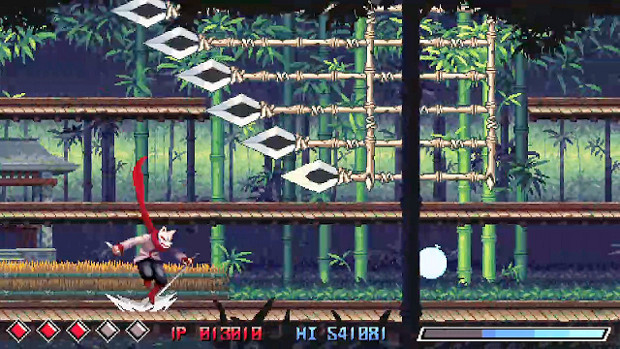 An autorunner which incorporates gameplay elements from Shinobi? Go on...

Visually, it’s probably the least pleasing of the five games on offer but the biggest gripe with Kill Screen is in the overall design. Each enemy that is defeated, by selecting one of three available attacks, provides XP that goes towards increasing your level. You can also heal once when your health is low but, ultimately, it’s inevitable that you will be defeated numerous times on your way to the end of the game.

Meeting death places you back to the beginning of the dungeon with all of your experience retained and progress marked on the map. Kill Screen forces you to retread your steps several times until you have enough experience to be able to make it through a minor gauntlet of enemies and defeat your target.

It’s not a terrible end to 198X by any means, but it doesn’t feel like it quite fits in with the ‘arcade’ theme. 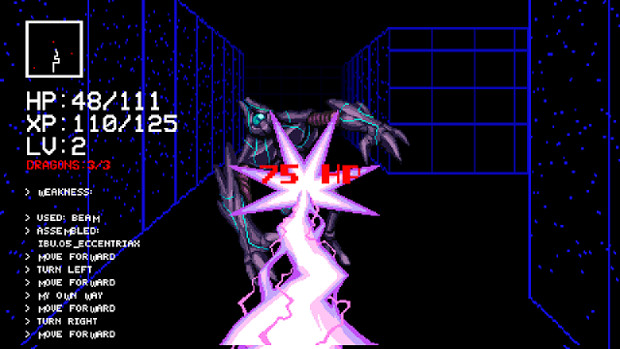 Overall, 198X has an awful lot to like. The music and visuals are awesome, perfectly capturing the vibes of the era, and the variety of gameplay on offer throughout the short playtime keeps the experience fresh for its duration. The voicework and cutscenes are well done and, with the game being advertised as ‘Part 1’, 198X offers a little taste of something that most certainly leaves you wanting more.

Unfortunately, that is also 198X’s greatest weakness. Each game, from Beating Heart to Shadowplay and, to a lesser extent, Kill Screen, give a glimpse of something you would like to see develop and become something more. As it stands, however, the majority of the game is spent wishing everything would just push that little bit further in a positive direction to turn 198X from a fun, one-night experience, into a game that will stand the test of time and wish to be replayed like so many of the classics that it takes inspiration from.

198X seems like it should be greater than the sum of its parts and even though each arcade game is well made, the overall feeling that they leave you with is the impression that with a bit more fine-tuning, the game as a whole could have been elevated to near modern-classic status. As it stands however, what we're left with is a title which is ambitious in its scope as it tells a story really well, and the soundtrack combined with the visuals really set the 80's scene perfectly; it's just a shame that there isn't more of it or much of a reason to return once you've beaten it.

198X has an awful lot to like. The music and visuals are awesome, perfectly capturing the vibes of the era, and the variety of gameplay on offer throughout the short playtime keeps the experience fresh for its duration.