Welcome to an Arcade Archives review, N-Europe’s verdict on the updated Neo Geo titles being released on the Nintendo Switch eShop on a regular basis. Written by Sam C Gittins

If there's one particular genre that I've enjoyed delving into the most over the years of reviewing Virtual Console titles, then it has to be the shoot-em-up; obviously this is no secret as I mention it virtually every time I cover a shmup which is special, although with many VC titles this would be more often than not and now with ACA NeoGeo releases this is becoming a more frequent occurrence which I'm most thankful for.

This particular release happens to be another Vertically-Scrolling shoot-em-up which I've always had a fondness for, despite the fact that none of these NeoGeo release have ever officially supported vertical displays, Hamster have made provisions for this as you can rotate the display and make it fill the screen sympathetically so that it doesn't completely destroy the image, it is possible to play this way easily without investing an a vertical display by simply using the Switch in tabletop mode, detaching the Joy-Cons and placing it on the stand, which is something I would advise anyone to do - sensibly of course as neither myself or N-Europe will take any responsiblity for damaged Switch consoles - if they are even a little bit curious about how these games play this way.

It would seem this simply wasn't enough for this reviewer though, so recently I have invested in and spent some time setting up a dedicated vertical display so that I can play these titles using the unique display options provided in these excellent arcade releases. This is something I had been meaning to do for many years now, realistically ever since playing Ikaruga on the Nintendo GameCube all those years ago, now some fourteen years on I find myself reading the message in the manual which says...

"Warning! Do not attempt to play on a household television turned on its side! Doing so could cause an accident, damage and/or fire. The game should be played with a vertical screen only when using a special monitor designed for this purpose."

Now that I finally have such a suitable display which means I can play these titles vertically with virtually no compromise, I intend to do so with each shmup which can sensibly be displayed in this manner within the ACA NeoGeo series.

So without further ado, on with the review!

Let's get one thing clear, Aero Fighters 2 (aka Sonic Wings 2) is a lot of fun, more fun than you might reasonably expect from an unassuming shmup with a real world inspired setting which some might dismiss at first glance; please don't do this as you'll be missing out on what is one of the most enjoyable examples of it's genre in existence, which is high praise for an opening paragraph indeed.

There's a hostile takeover of Earth in progress from an unknown intergalactic alien race, so naturally it falls upon you to stop them as you choose from perhaps one of the most diverse character line-ups I've seen in a while for this type of title. You can be one of eight characters which include a Baby, Cyborg, Japanese Idol, Mother & Daughter team, Ninja, Retired Top-Gun, a Punk Rocker and of course... a Dolphin.

Each of the pilots has their own aircraft including an F-15 Eagle along with others, so it might just be best to choose the plane you like as each of them handles differently and has their own set of weaponry plus specials as you might expect so it's best to just see how you go with one but with such an excellent selection you're certain to find at least one you like, it also adds to the replay value as well of course.

In any case your basic controls revolve around movement from either the analogue stick or D-Pad, standard fire button with non-compromised movement, alternate rapid-fire button with seemingly slower movement and of course your bomb special which varies between crafts, containing anything from standard explosions, laser fire or other devestating attacks which will generally either clear a screen of enemies or deal a decent amount of damage to bosses.

For the real arcade experience though I won't be recommending the Joy-Cons or the Pro Controller but instead the Hori Real Arcade Pro Hayabusa arcade stick made specifically for the Nintendo Switch which really elevates the experience to something altogether much more authentic overall as the quality of it really is second to none. But I realise that these ACA NeoGeo releases are all about being easy to play at a moments notice on the Switch so I understand that this won't be an option for some but I'm definitely a fan of "controllers which are bigger than the console itself" to borrow a phrase; and because of this plus the versatile control remapping options available I felt it worth a mention at least. 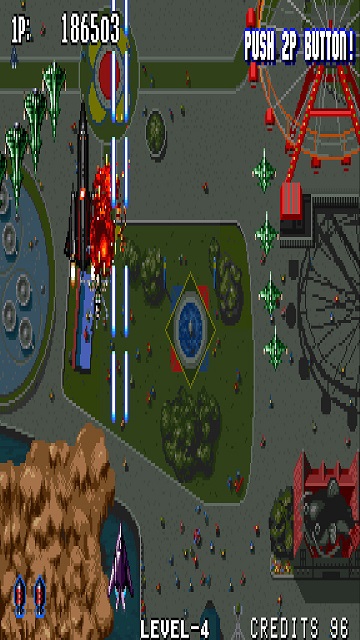 That ferris wheel isn't just for show you know, blast away and watch it roll!

As aforementioned you will be flying across real-world inspired stages such as Japan with its vast city-scape with loads of helicopters to take down, U.S.A which has plenty of sights including a theme park with a ferris wheel which you can shoot for a points bonus, Australia complete with a flight over Sydney Opera House of course while taking out loads of Gunboats and a few other locations which I won't completely ruin but I will say that the variety and attention to detail is excellent.

But of course it's the boss battle which form an integral part of any shmup be it vertical or hoizontal, set across one screen, two or three... you need these encounters as they are what ultimately account for a lot of the challenge and ultimately the enjoyment. You certainly won't be let down here as there is a smaller version of a mechanical boss from the first Aero Fighters game which attaches to a giant walker machine to form the first stage behemoth-sized boss, there's a giant stealth fighter, an impressive battleship encounter and even a weaponised pyramid plus many more besides which will challenge your ability to not die, though if you do at least you can add more credits at the press of a button except this won't help you on the final stage which you must complete in one full single credit run for some odd reason.

If you have anyone else who is willing to play two-player co-op with you then I would certainly advise it, as not only is it a blast but you can effectively carry on playing without worry even on the final stage by always having a ship in play and you can select a different ship each time you continue, I fully admit that I used this to complete the game twice over only by being in "control" of both ships but it is of course much more fun with two people playing the game properly as you can see which ship combinations work best plus I'm sure that you get different short story skits inbetween stages in addition to being able to see different endings. 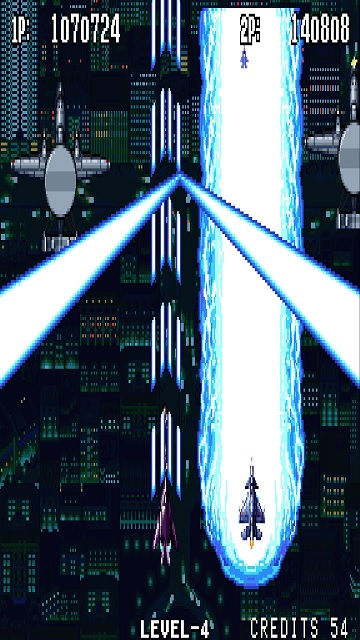 Indeed there are multiple endings depending on how well you did as well, plus there are not one but two hidden end of game bosses to discover, one of which is Tenukie Chaudo who is a giant ghost character who is closely associated with the Aero Fighters series (though he also appeared in an earlier Video System game called Rabio Lepus as a boss) along with the Kame-Chargers who turn into carrots upon destroying them. The second final boss which is apparently very rare indeed called Manbou is an ocean sunfish who doesn't even attack the player, though you can choose to heartlessly kill it if you like but I would advise not doing so if you are lucky enough to encounter it (very rare with a one in two hundred and fifty six chance) because there is a pacifist ending for letting it escape and if I'm ever lucky enough to see this "boss" then that is likely what I'll do... unless I blast it away instinctively by mistake of course; anyway it's a really cool easter egg.

Varied visuals always keep things interesting, it's one of those titles you really have to see in action in order to fully aprpeciate, the framerate is decent enough as it's faithful to the original complete with slowdown of course when there's lots going on but this is by no means a problem as it doesn't dip by much. All of the animation is really solid as well when you consider all of the different aircraft, stage details and the scenes inbetween stages plus lots of explosions whether it be from shooting down enemies or destroying an interactive part of the backdrop; it's very hard to be critical of as it holds up so well.

Likewise the audio is up to a similarly high standard, featuring a high energy soundtrack as the perfect accompaniment to the hectic on-screen action, it's not one for featuring individual tracks you'll likely be remembering even when you're not playing but rather it is most fitting in the moment which is when it matters most. All of the sound samples used for the weapons, explosions, items and end stage fanfares are all of the highest quality, serving only to immerse you even further into the games fantastical aerial setting. 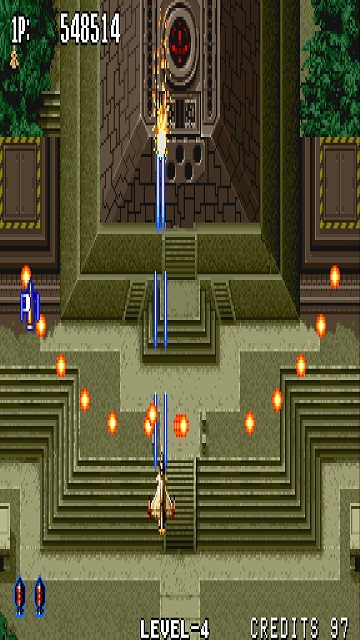 Pyramid boss with hidden robotic eye at the top confirmed!

Plenty of challenge is available in the form of extra modes which are standard for the ACA NeoGeo series but come into their own here, Hi Score is where you can opt to attempt a single credit run if you're feeling confident enough, or if you're wanting to practice getting a little further each time then why not go for the five minute time limit of Caravan mode, each has their own different challenge and online leaderboards.

However you choose to play, please at least do that if scrolling shoot-em-ups are that particular genre which you crave as if you've never played this title before, just as I hadn't before having the pleasure of reviewing it then you simply must give it a shot as it really grows on you the more often you play it. Well worth having on your Switch so that you can play it at a moments notice, there's quite an impressive library of digital titles being built up under the ACA NeoGeo label alone on the console, if you're only going to experience a few then I would advise bumping this title to the top of the list purely for playability alone as it's an amazing shmup available for very little investment considering the amount of enjoyment that's potentially on offer; this one is certainly a high-flyer.

Aero Fighters 2 is easily one of the finest vertically-scrolling shmups I've ever experienced. Offering a unique set of ships to pilot each with their own playstyle coupled with some solid stages and memorable boss battles will make you want to return to the skies for frequent flying sessions.

Perhaps too intense for some