Welcome to an Arcade Archives review, N-Europe’s verdict on the updated Neo Geo titles being released on the Nintendo Switch eShop on a regular basis. Written by Sam C Gittins

After another absence I felt that it was time to get back to it with a verdict on what is quite possibly the most highly-anticipated ACA NeoGeo title yet, one which is surely of legendary status, an epic of surely untold proportions. That's right, it is of course Magical Drop II!

What else could I possibly have meant to cover? In all seriousness, this is an excellent Puzzle game and is a personal favourite of mine which I have played before many years ago but not quite like this, as the highly polished Arcade Archives version from Hamster makes this classic even better on the big screen and on the go.

So without further ado, on with the review!

Puzzle games have arguably been an essential addition to the industry ever since the mighty Tetris burst onto the mainstream scene on the original Gameboy some two decades ago. Ever since then we've had a myriad of puzzle titles revolving around falling blocks of all different shapes and sizes including a certain charming but lesser known series called Magical Drop and it's the first sequel that has now finally arrived for download.

Sharing more similarities with Puzzle Bobble than anything else Magical Drop II is a fast-paced, balloon bursting experience which challenges your jester-like character to catch and match these inflatable coloured spheres vertically in order to clear the screen of them. Chain reactions of course can be achieved in turn plus by using special items you can clear many at once if used at the right moment; things tend to get most hectic however when the speed gradually increases creating a frenetically paced and fun puzzle title like no other.

There are two modes; "Puzzle" where you attempt to clear the screen of balloons which are set up in varied arrangements which get trickier the further you get and "VS CPU" where it's you against the CPU, the usual garbage rule applies whereby any large amount of balloons cleared from your side creates more on your opponents. 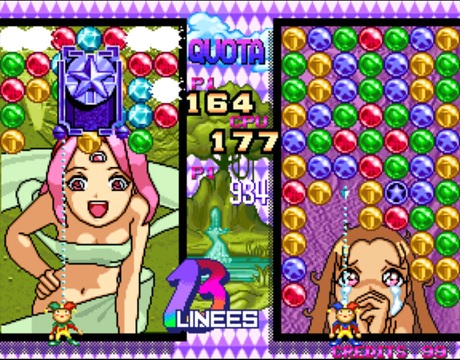 Oh yeah, thirteen lineees! You'd better be crying after that one.

Both modes are decent but VS tends to be more entertaining due to the weird yet wonderful characters you end up facing-off against which lend themselves well to the bizarre theme of the game, each of them seem to have a generic name based on the persona they are portrayed as such as "The Star" who is some kind of idol, "The Chariot" who appears to be a Roman soldier and more besides.

My personal favourite happens to be "The World" who looks like a Goddess with a third-eye and an aversion to clothing... make of that what you will but my point is that it's pretty easy to find a favourite character in this clearly diverse roster.

Controls are pretty simple and lend themselves well toward the game being easy to pick up but hard to put down as it has an astounding addictive quality that's the hallmark of many a decent puzzle title too. Attractive visuals and a catchy but often repeated main theme do add something to the experience but it's the gameplay that wil keep you coming back for more. 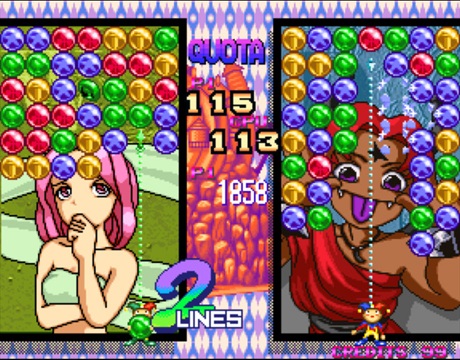 Think carefully... but act quickly! It's an eternal conundrum.

Of course if you have any friends on hand to play this game against, then you can take the amount of potential fun of beating the CPU into the ground and times that by ten, especially if you're playing against someone who really knows all of the tricks to pulling off quick reaction-based combos. There's a decent amount of challenge to playing any of the Magical Drop games competitively and it's always surprising how quickly the tide of a game can change on a single balloon being burst.

Colourful on-screen elements coupled with contrasting backgrounds really set the visual tone here, especially when you add in the animations of your on-screen avatar which will be different in accordance with how well you're playing, there really is a lot of charm to be derived from the aesthetics alone.ÂÂ 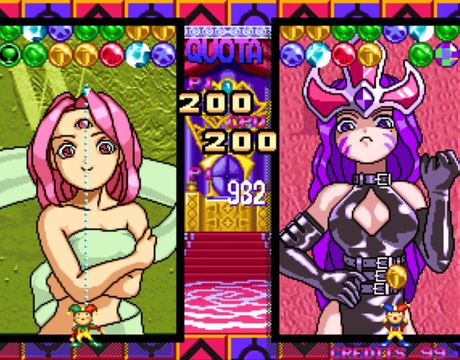 Magical Drop II is full of opponents who wish to dominate you. Don't let them!

Add in the soundtrack which is sensational just on it's own into the mix and you have something really quite special, I challenge anyone to play this game for more than five minutes, then tell me that you weren't at least a little bit caught in a trance by it all. The themes are always frantic, the sound effects satisfying and the combination of it all mixed together is nothing short of digital intoxication; you'll likely be humming the tunes long after you stop playing, this is definitely not a title you want to play before planning on trying to sleep but it's a welcome way to fill the time if you're intent on staying awake... just one more game!

If you're a proper fan of puzzle titles then you're in for a treat here a Magical Drop II has a great deal to offer as it's so easy to get sucked into yet so difficult to stop playing once you get into it. Obviously there are other puzzle games available but if you've tried everything else that's out there and you need a decent fix then there's really no reason not to get it, unless Magical Drop III becomes available of course, in which case by all means purchase that as it improves on the formula even further but in the meantime there really is nothing quite like this unique title on the Switch eShop or even just under the ACA NeoGeo label.

An experience which is amazingly enjoyable and addictive in equal measure. Magical Drop II is a real gem within the Puzzle genre from a series which really deserves being given a chance to shine, especially on the Switch.