Earlier this year, I wrote about how the Switch was slowly becoming the go-to console for fans of visual novels. Whether it’s Raging Loop or the Phoenix Wright Trilogy, the portable nature of Switch led to somewhat of a renaissance for the genre. Arcade Spirits, a romantic visual novel set in a world where the infamous video game crash of the 80s never happened, proves itself to be another welcome addition to the genre.

As the name suggests, Arcade Spirits takes place almost entirely in an Arcade called Funplex in the year 20XX, an alternative time-line where the gaming industry surged in popularity in the 1980’s. Your protagonist, who can be completely customised, lands a job at a local arcade. From here, the gameplay loop here is pretty simple, with the purpose of the game to simply build relationships with the various different characters in your arcade. 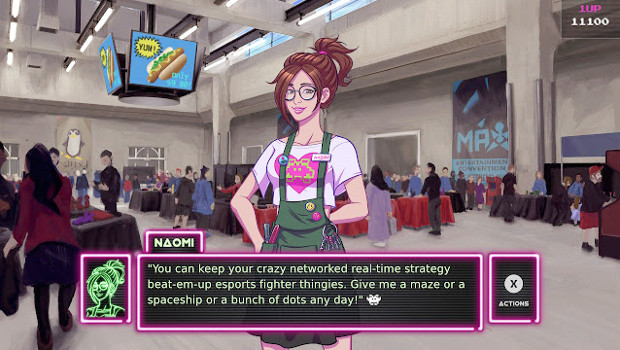 Have it your way

Arcade Spirits is essentially a dating simulator, but the developers have made the game in such a way that you don’t necessarily have to treat it like one. Each conversation and interaction with a NPC can be shaped by the player, with certain types of replies allowing the player to be either level-headed, humorous or even aggressive in their responses, which impacts how each of those relationships develops. The game is also LGBT friendly, and you’ll be able to build a relationship with any character you choose which gives the game excellent replay value.

Naturally, a game like this is therefore all about the characters, and thankfully the developers have done a great job in a creating a diverse and interesting range of NPC’s to interact with. The character roster isn’t huge but given that the gameplay involves simply talking to different characters as your days in the arcade go by, there’s more than enough to keep you entertained. Different characters also respond positively or negatively to different to your different types of responses, so the rational-minded business manager Gavin won’t respond well to more quirky responses, for example. The characters are all well-realised and the artwork for each character is some of the best I’ve experienced on Switch. 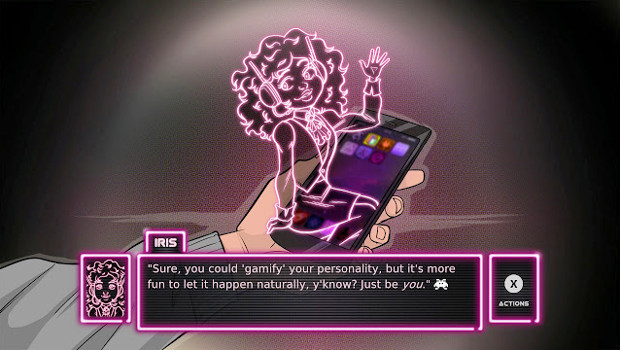 Some seemingly sound advice from a digital assistant, that's a pleasant surprise.

A surprising amount of Arcade Spirits is voice acted, which isn’t always a given in the genre and so it’s certainly appreciated. The quality of the voice acting is generally very good, and whilst not every line is voice acted – not surprising given the amount of branching options in the game – it’s still enough to bring the characters to life. From Naomi to QueenBee (don’t ask), there’s a lot of fun conversations to be had Graphically, the game has a superb art style that suits the arcade environment that the world is set in, and the soundtrack is pretty good too, if not a bit limited.

It’s taken me a while to get through Arcade Spirits, but not because I never enjoyed the game. In fact, having now played through the game twice, it’s clearly one that kept me coming back for more. Arcade Spirits biggest strength, in my opinion, is that it offers incredibly stress-free gaming. Whereas gamers across the world have been selling turnips and chopping down trees in Animal Crossing over the past few weeks and months, I’ve found that Arcade Spirits has become my go-to game when I need to unwind or have half and hour to immerse myself into a game. There’s no over the top story or Hollywood levels of action – there’s just talking. And that’s kind of the point, isn’t it? Video games offer a chance at escapism, and this is perhaps the best example of a visual novel offering that. 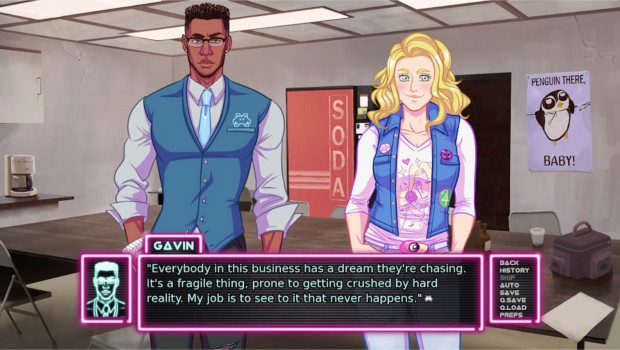 Gavin seems like he quite literally has a dream job.

Arcade Spirts is an inclusive visual novel that offers fascinating characters, a great script and genuine replay value thanks to the fact that the developers have gone the extra yard to make sure that your life in arcade isn’t as predictable and one-dimensional as other games in the genre. Arcade Spirits never had me on the edge of my seat, but it certainly kept me coming back for more. If you’ve got a Switch and want some virtual escapism, you couldn’t do much better.

A unique Visual Novel which utilises an Arcade setting to great effect, Arcade Spirits offers a rich and vibrant experience, thanks to its diverse cast of characters and ample amount of dialogue choices. For a game which has been produced by a two-person team, this is an impressive achievement as this title will likely provide you with many relaxing hours, in a comfortable and well thought out setting. If the Arcade is your scene and you enjoy Dating Simulations with a difference, then why not drop some coins on it?

Each conversation and interaction with a NPC can be shaped by the player, with certain types of replies allowing the player to be either level-headed, humorous or even aggressive in their responses, which impacts how each of those relationships develops.