When I started up Astro Bears Party I thought I’d give the single-player a go so after choosing my bear of choice (Neil, the all-rounded equivalent to Mario in sports titles) I selected Jetfish Hunting and played it for a little while. After a few attempts I then decided to check out a different mode, only to find it didn’t exist. So I tried it in multiplayer to find there is only one mode.

Astro Bears Party is definitely a focused title. It might be easy to call it limited, but only compared to titles such as Mario Party with its plethora of minigames. The sub-£5 price point certainly helps, and in many ways it's not too dissimilar to a mobile game that you might spend a few pounds on, only with better graphics and a multiplayer mode.

The core part of Astro Bears Party is enjoyable and will appeal to gamers that like to constantly try and outdo themselves. You pick one of the four bears, each with slightly different competencies, and constantly move around a small circular planet trying to collect Jetfish (jet-fuelled fish). As you move a ‘Magical Beary Ribbon’ forms behind you that will finish the game if you touch it - think a 3D version of the classic mobile game Snake. 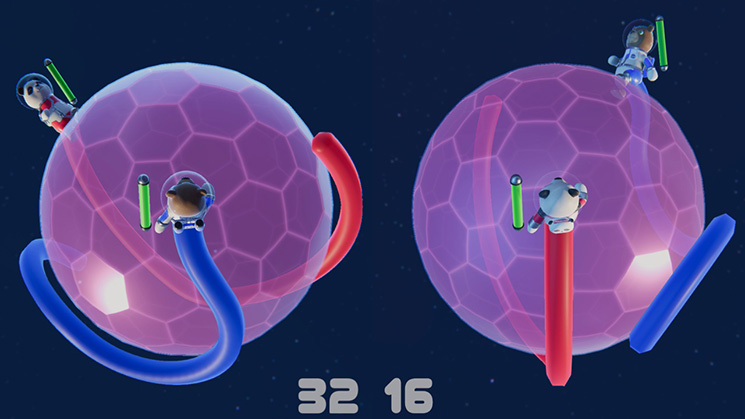 The challenge becomes greater when playing in multiplayer as you must avoid each other’s ribbons by changing course or jumping over (resulting in ribbons that are horizontal and vertical) and can juggle the competing aims of collecting Jetfish and trying to trap your opponents.

How much enjoyment you get out of Astro Bears Party depends on how competitive you are, either with yourself or others. It is fun to play and easy to get into a ‘just one more attempt’ flow, but how often you’ll actually come back to the game though is likely to be limited. It’s a fun little game and may play a part of evenings in with friends.

Gameplay aside, there are a lot of charming little touches. The four main bears are silly and cute and I particularly enjoyed how the button you need to press is indicated by four circles in the shape of the Switch’s face buttons, but with a bear’s head silhouette replacing the button you have to press. 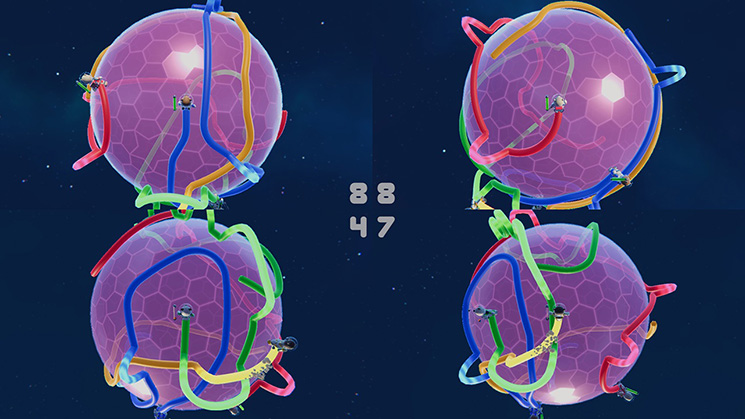 There is only one track in the game that is on loop while you play.  It's certainly not annoying or feels that repetitive, but a bit more variety of music might have been a welcome addition to add some variety.

It is easy to say “this game should have more content”, but if you know upfront what you’re getting then it is up to you as to whether you should pay for it. The game itself is fun and if you frequently have friends or family around and want an easy-to-pick-up game for everyone to play you can’t really go wrong at this price. It won’t replace Mario Kart 8 Deluxe as a go-to multiplayer game, but it is a charming little title.

Fun, cute and can be addictive but don't expect a lot of different gameplay modes because that just isn't what QubicGames was going for. It's low price point puts it into the impulse purchase zone and if you often have friends round it's worth the price.