Videogames can be incredibly varied experiences. Some allow you to conduct a peaceful life on an idyllic farm or an island. Some allow you to blast through dozens of enemies with potent firearms. Some even ask you to survive as a scavenger in post-apocalyptic scenarios.

You might think all of these genres are incompatible, and yet, Bird Bath Games took it upon themselves to disprove that notion, by making a game that combines all of these concepts: a game in which you attempt to survive the aftermath of a nuclear war by farming as much food as you can in your farm, while defending it from hordes of mutants. And also, it's a roguelike.

How does this all work, then? Well, it all starts with a young farmer named Lavender, a modest 3x3 patch of arable land, and four potato seeds. Using conventional twin stick shooter controls, you can till each of these 9 squares, and plant your seeds in squares of your choice. You then water the crops frequently, apply as much fertilizer as you can find (defeating enemies such as pesky mutant moles provides you with plenty of it), and soon enough, you’ll find yourself with four healthy potatoes, bobbing up and down, so happy they are to see you (this radioactive soil does weird things to what grows in it). Well, even with eyes and faces, these potatoes are edible, so you pluck them and sell them for the local currency: cashews.

But then what? You’re out of seeds, how are you to plant more potatoes?

Your only option is to explore the biomes (that is to say, environments) that surround your farm, to gather whatever more you can. Not an easy task, as this post-apocalyptic world is overrun with mutated monstrosities such as giant scorpions, beeson (a mix between bees and bison), and the most common foe of all: firearms-carrying bandit rabbits. We all know how unwise it is to approach vigilant rabbits surrounded by skulls, and yet this farmer has no choice but to do so, armed with nothing but a pea shooter (literally, that’s the name of the gun).

It is in these dangerous wild biomes that you are sure to find seeds of various kinds (such as cabbages or beans), but you’re just as likely to find valuable tools (such as pickaxes that allow you to expand your patch), animal helpers (such as a cow that helps in watering crops, or chickens that help with weeding), or even some farming equipment (such as tractors or scarecrows). The tricky part is defeating the enemies that guard these goodies, and choosing what to seek out first.

Perilous as these trips can be, the real challenge comes once the sun sets: hordes of enemies will invade your tiny farm (some are after your crops, others are gunning directly for you), and if you want to see these crops bear productive produce, you have no choice but to stand your fertile ground and defend your soil patch from waves of enemies till the sun rises. Only then will a rescue helicopter from the local settlement come and get you, allowing you at last a moment of respite from this hellish landscape.

All in a day’s work! There’s more to do tomorrow. 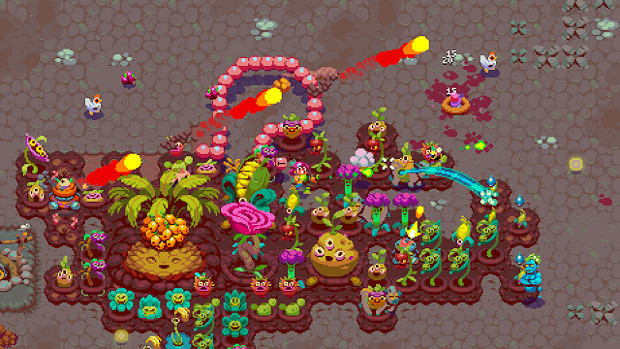 At its root, it’s a very good marriage of concepts: gather resources and/or power-ups, cultivate them properly, and harvest them when they’re ready. All the while, there are various enemies to deal with, and a schedule to respect.

Between days, you have access to the settlement, where you can spend your cashews on items, seeds, and guns. Notably, this is the only place in the game where one can obtain a different weapon, likely because they only last one day before breaking. They’re worth the price though, because weapons such as the Spud Rifle and the Blunderbloom can be downright essential once the going gets rough.

This is also the one place where you can date the local singles. That’s right, even nuclear fallout cannot stifle Man’s pursuit of love. Despite the healthy variety of singles (there are men, women, a rabbit, a giant bug…), dating in the countryside is simple: you simply offer roses. You grow these as you would any vegetable, except you can’t sell them for cashews. With each stage in the relationship, your object of affection rewards you with gifts as well (such as a horse or a defence turret), and once you reach marriage, they’ll even pick up a gun and help you out during the day! Truly heartwarming. 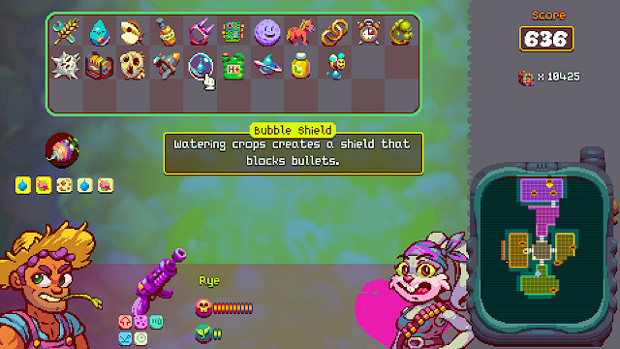 Ah the "Bubble Shield" a power-up which has been a staple in games since Sonic 3 (& Knuckles).

As you may have already surmised, this game looks absolutely gorgeous. Incredibly detailed sprite art, pleasant colours, creative designs for enemies and vegetables alike, and vivid, fluid animations filled with character. The sprites lack black outlines, bathing the screen with pleasant colours and a soft contrast. Despite this, it’s never difficult to tell what’s happening on-screen, even with dark, muted, night time colours.

The fun, colourful visuals are accompanied by equally fun and light-hearted writing. There are affectionate references (such as “Harvest Moon”, an item that improves crop growth during the night), silly dialogue (such as how the giant bug keeps claiming he has a “very human job”), and of course, the puns. From boss names (such as The Bundertaker) to normal health pickups (Heart Beets. Yummy), from the corny to the wheaty, these bountiful puns are a rye-ot.

The game controls generally well, as both movement and shooting are responsive, and fairly easy to pull off. Controls are always displayed on screen, so it’s easy to start and learn. The controller layout is even set up so that working the farm doesn’t interfere with running or gunning.

The only main issue I have here is that, when choosing which tile of soil to work on, the right stick can be finicky and imprecise. I’ve found myself working the tile above my character, despite the crosshair looking to be on the tile to the right. This is only a minor annoyance during quiet times, but while defending the crops, it can be very frustrating to plant a seed on the wrong tile because you were trying to avoid bullets. 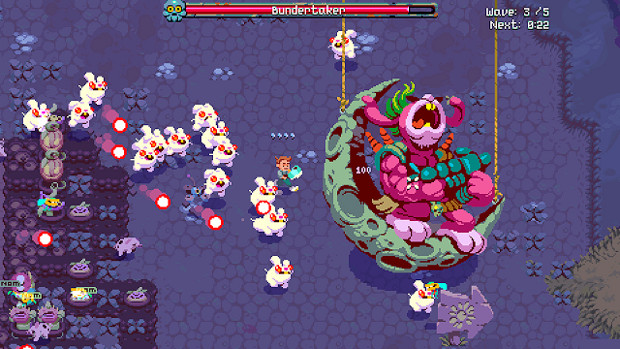 Watch out for the pun-tastic boss that is "Bundertaker" It'll rabbite you if you're not careful.

The soundtrack is made up of soothing, ambient music, reminiscent of the American countryside. There’s a different track for every biome that fits the mood the game is looking for, albeit not the sort of strong memorable tunes that get stuck in your brain (except, perhaps, for the sudden shift into tribal drums that accompany boss fights).

More importantly, the sound effects are excellent, and really contribute to the general game feel. The animals and plants you’ve gathered make a lot of noise, making the farm far more lively. It’s satisfying to hear your gun being fired, and just as satisfying to hear your bullets hitting your enemies. Each gun even has a different sound effect, and they each seem to fit (including the more outlandish ones, such as the Flying Squirrels).

Unfortunately, the game’s technical performance isn’t as polished. As of the game’s launch, Atomicrops is marred by noticeable technical issues. Pieces of fertilizer dropped by slain enemies will sometimes be intangible, unable to be picked up. Enemy projectiles will sometimes not resolve their animation properly, leading to airborne, frozen, inoffensive bullets (most noticeable with enemies that throw bombs at you, as these are supposed to land on a bright blinking crosshair that will likewise not disappear, since the bomb never landed).

Furthermore, there is a significant amount of stuttering throughout the game. It’s barely noticeable during the early levels (only seen when entering a biome), but they become much more frequent in later stages, when there are dozens of enemies on screen.

These make for a rather cumbersome experience, which is a shame, in a game that otherwise feels so polished. The game feels smooth when it’s running properly, so it’s a shame it can’t keep that up reliably. 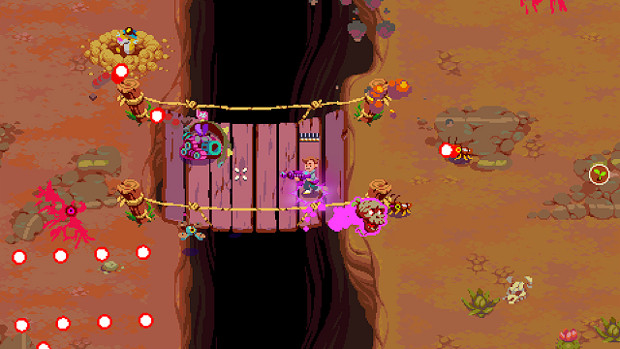 A bridge too far? Gerudo Valley this certainly isn't, though it is somewhat reminiscent.

The roguelike aspect comes in when you realise that health is limited, and hard (or costly) to come by. Any given run consists of you trying to complete as many days as possible, while yielding as much profit as you can. There’s a healthy variety of items to keep each run interesting and unique, not to mention four biomes to explore (each with its own set of enemies).

The gameplay system is also fairly deep, with different strategies, tricks, and choices to consider. For example, do you spend a full day exploring biomes and the next one growing and tending to your crops? Do you prefer to multitask and do both simultaneously? If you leave your soil patch empty during the night, is that a viable strategy? Seeds from the desert biome grow slowly, but require very little water, whereas it’s the opposite for seeds from the plains biome, are you taking that into account? Trees grow differently, but they occupy a lot of space, how do you handle them? And did you know that crop revenue doubles if you have four of the same kind planted in a square? Let’s not forget about limited use items such as earthquakes, rainclouds, and tractors.

The difficulty curve throughout the days starts steady, but ramps up quite a bit as the seasons go by. You start farming at the beginning of spring, enjoying its bountiful days, all three of them. The end of the season is heralded by the arrival of a boss, whom you must fight alongside the nightly hordes (you merely need to outlast it, but defeating it results in copious amounts of fertilizer). Each season follows this structure, but with increasing amounts of enemies, higher prices, and farther biomes (perhaps too steep of an increase, as there’s a noticeably large leap in difficulty between autumn and winter). Your run can be considered successful after you survive all 12 days of the year. Afterwards, your next run will be called “Year 2”, with each further success unlocking a new year, each more difficult than the last. As far as I could see, there are ten years in total (though you can still attempt runs in earlier years, thankfully. Always best to have options).

All of these gameplay aspects result in a game that’s both rewarding to explore and tuned to whatever challenge you desire. Adding to the fact that there are three playable characters (each with their own attributes and starting equipment), and you can tell that Atomicrops has a lot to offer.

There is, however, one common roguelike feature that I feel is lacking: a catalogue/inventory in the start menu, featuring every item, power-up, equipment, etc. that you’ve seen so far. Its absence is understandable, as the game was in Early Access up until recently, but it would have bean... been nice to have.

In conclusion, original concepts are hard to pull off, especially when it comes to gameplay mechanics. Atomicrops took on a steep challenge, and proved that it has what it takes to carve its own identity as a charming, memorable roguelike-farming-dating-sim-twin-shooter-tower-defence game that’s worth sinking your time into. It unfortunately suffers from performance issues, but they are the sort of thing that can be fixed by future patches. Time will tell how the game evolves, but for now, I’m confident that it will be able to rice – I mean, rise to that challenge.

At its root, it’s a very good marriage of concepts: gather resources and/or power-ups, cultivate them properly, and harvest them when they’re ready. All the while, there are various enemies to deal with, and a schedule to respect.