If you’ve ever played through the rocket barrel levels of Donkey Kong Country: Returns or Tropical Freeze and had the masochistic notion that creating an entire game loosely based on this entire concept and raising the difficulty immeasurably sounded like the perfect idea, ATOMIK: RunGunJumpGun is the game for you.

Developed by indie developers ThirtyThree, ATOMIK follows a simple premise where only two things are required of the player: jumping and shooting. The jumping aspect works much like the aforementioned Donkey Kong stages where holding the jump button will make your character ascend while letting go will cause you to drop but, in actuality, everything boils down to firing your weapon.

As each of the game’s 120+ psychedelic levels automatically scroll along, you can either fire your gun forward with the right shoulder button to eliminate oncoming threats and enemies or fire downwards with the left shoulder button to propel your character higher into the air to avoid obstacles and collect green orbs. It is impossible to fire in any other direction and the fact that you can’t ‘jump’ and shoot at the same time makes for an interesting design choice that takes a little bit of adjusting to, despite the simplicity of the controls. 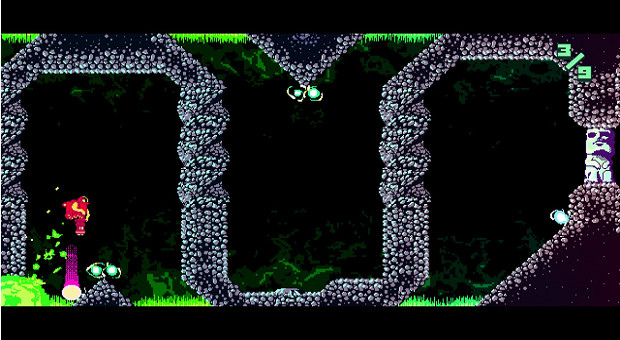 The orbs, known as Atomiks, are used to unlock more areas but attempting to obtain all of them provides a considerable challenge that will undoubtedly be too daunting for many, especially taking into account how testing it can be just to make it through to the end of a stage.

The levels themselves are actually very short (generally around 15-20 seconds long) but most of them will take several attempts to navigate, not least when new impediments and mechanics are introduced as you progress.

The game starts out with a few introductory levels to get the player to grips with the feeling of jumping and shooting without much threat. Your character is able to take only one hit as you travel forwards but a second hit or getting stuck behind a wall while the screen catches up with you will result in a return to the beginning of the stage. The sight of your character zooming back to the beginning of a level is a sight that you will be tremendously familiar with before reaching the final credits as you will certainly fail in ATOMIK. A lot!

Thankfully, you’re always straight back into the relentless action and each mistake will equip you better for future attempts.ÂÂÂ  That desire for just ‘one more go’ is exceptionally strong here. The only respite comes from successfully clearing a stage and being greeted with a comment from one of a number of unusual and eccentric creatures that inhabit the areas you unlock. It’s only ever a single line of dialogue but it helps to break up the action and give you the opportunity to regain composure after another heart-pounding obstacle course. 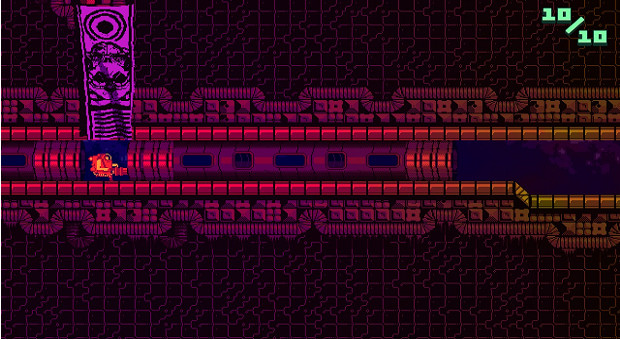 While the core gameplay may sound simplistic, ATOMIK provides a surprising amount of diversity with new elements introduced as you progress. The first of the three planets keeps things fairly straightforward with combinations of spikes, saws and bullets to avoid. Just as you’ve got to grips with how everything plays, suddenly the second planet introduces the ability to jump through the top of the screen and appear from the bottom while the third presents one of the trickiest mechanics to get to grips with in the form of water.

When you dip into water for the first time, you discover that you character suddenly flips upside down and the jump button that you’ve been using to ascend for the entire game up until that point now doubles as a way to descend when submerged. Things are further complicated by the need to crash into the water with enough force to allow you to descend otherwise you will float on the surface and undoubtedly get caught up by the screen.

It is refreshing that ATOMIK: RunGunJumpGun never allows the player to become too comfortable throughout as just when you think you’re getting to grips with everything the game will throw in a new component to encourage you to re-evaluate your approach. For example, I found myself getting into a healthy rhythm of always holding the fire button to shoot bullets forwards and tapping jump as required only to then come up against large spinning blades that rotated based on where you shoot them. In other words, mindlessly firing forward at all times wasn’t going to work! The game cunningly forces you to improve again and again until you’re good enough to take on the later challenges, even with the death counter soaring past 1000. However many times you fail, though, chances are that you’re still having fun attempting to overcome each trial. 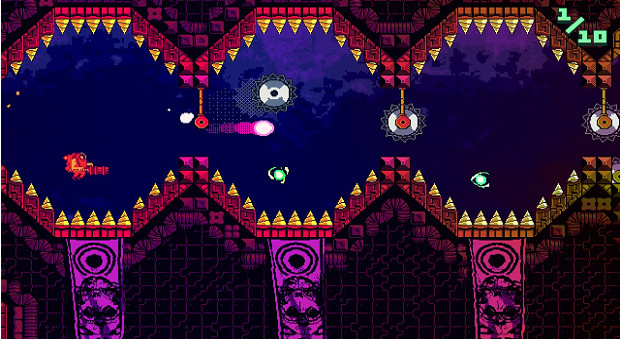 Having said that, you could have expected to be faced with everything the game has to offer when reach ‘The End’ but elements such as the ability to travel seamlessly between the top and bottom of the screen become entirely disregarded in favour of the underwater sections where a combination of these features may have gone some way to delivering even greater variety in the levels.

Visually, RunGunJumpGun is very crisp and clean with just enough exuberance to avoid the modest graphics from feeling too dull whilst never offering too much flair to distract the player from the task at hand. Equally, the music helps to enhance the overall vibe and fits well within the context of the game but it’s unlikely to stick with you once you put the game down.

ATOMIK: RunGunJumpGun is a game that could easily suffer from getting lost amongst a myriad of games with similar concepts and uncomplicated visuals but RunGunJumpGun’s ruthless edge and the feeling of satisfaction acquired from overcoming one of its numerous nightmarish elevates it above many of its contemporaries to provide another great entry to the ever-expanding indie catalogue on Switch.