Chances are you have played Bayonetta before. Maybe you picked it up for the WiiU back in 2014, or maybe you gave it a whirl on the Playstation 3 or more recently, on PC. I haven’t touched a game in the series before however, so my first date with the wicked witch is on the Nintendo Switch. And it was one hell of a date!

With Bayonetta 3 teased for a release on Switch it is a logical step to port both Bayonetta 1 and 2 to the system as well. When picking up Bayonetta 1 you will basically be playing the WiiU version, which we reviewed when it came out.

When you compare the WiiU to the Switch version you won’t find many differences. The WiiU exclusive options such as touch controls and the Nintendo-themed costumes make a return. The biggest change is that you can now play Bayonetta completely on the go in the Nintendo Switch’s handheld mode.

For those (like me) who haven’t played Bayonetta before, let’s talk what the game is about. As you can probably guess from the mature rating and the pictures of the lead character, this is no game for kids. Bayonetta is a fast-paced, action-packed action game filled with sexual innuendos and gore. You take the role of the titular Bayonetta, an Umbran witch who takes down angels for a living. This is done by pummeling your foes with combos, while evading counter-attacks. Succesful and well-timed evasions activate witch time, a slowdown of the environment which gives you some extra openings to hurt your enemies some more. 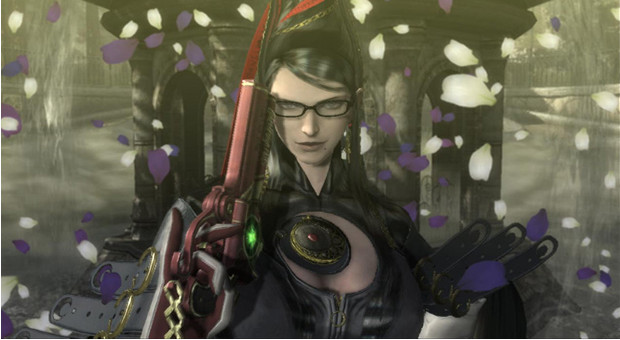 In about 15 chapters the game tells the story of Bayonetta, which is presented to you with a plethora of cutscenes. Most of those are presented in a slideshow type of way, showing some age of the game as there probably was not enough capacity to render every cutscene when the original game released back in early 2010 on the Xbox 360 and Playstation 3. Graphically the game looks still sharp, although some water textures and characters show that this game is already 8 years old.

Luckily the strongest point of the game, the gameplay with its excellent combat system, still stands tall as a tower. Combat is fast, responsive and challenging. By combining punches, kicks and dodges to activate witch time you can deal some serious damage. Doing so fills your magic gauge, which lets you activate a not-so-subtle torture attack. Button-mashing improves the strength of your torture attack. Different weapons and a number of unlockable items and combo moves add to the depth of the combo system.

In between combat you are either watching cutscenes, or wandering around in a pretty linear world. Some levels mix up the action, as they put you behind the wheel of for example a motorcycle. You can play these levels normally or with motion controls. Although these levels feel a little bit gimicky, it is a welcome variety on the normal levels. 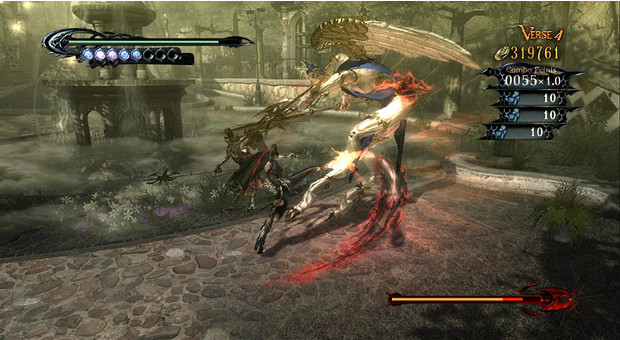 The game really shines in the boss battles. These let you battle grotesque creatures which often fill most of the screen. The epicness pops off the screen as you single-handedly take down these angelic behemoths and finish them off with over the top special moves.

Thematically the game can be a mixed bag for some. Bayonetta herself is cocky, flirtatious and not afraid to show some bodyparts in a tight outfit (which is made of her own hair... it is something Umbran witches do). Cheesy one-liners are no stranger in the game. Most dialogue put a smile on my face, but I can perfectly imagine you may find it too over the top or cringe-worthy.

The story itself tells the tale of the battle between the Umbran Witches and the Lumen Sages, who both operate in a separate dimension on Earth. As Bayonetta you often move between these dimensions, or sometimes you cross over into Paradiso (the heavenly dimension where most of your angelic foes hail from). You however get your power from Purgatorio or Hell, and you often use moves which draw power from that dimension. I am a sucker for these occult themes (I loved the anime Hellsing for example), but it is quite a heavy theme. It is however very fitting to the setting and characters. 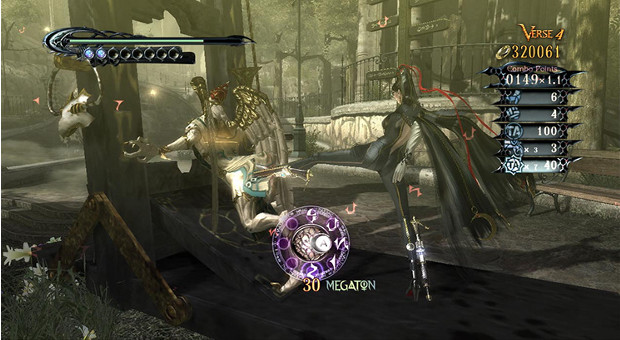 I mostly enjoyed Bayonetta on the large screen playing in docked mode with my Pro Controller. The action is smoothest this way without too much slowdowns or framedrops. However, after finishing the game it was great to replay chapters in handheld mode to try and improve my ranking. Although there is some more slowdown in this playstyle, being able to pick it up and bash through a chapter again (skipping those cutscenes) was very tempting.

Although the age is showing through in some aspects of the game, Bayonetta is still a very solid title. If you have never played it this is a must-have, especially since you can pick it up cheap on its own or with a discount together with Bayonetta 2. If you are familiar with the game you can expect the same experience as on the WiiU, only with the added value of playing it completely on the go.

...the gameplay with its excellent combat system, still stands tall as a tower.