Bayonetta fans were up in arms when it was announced that a sequel was coming out exclusively for the underperforming Wii U. With the Switch already surpassing the lifetime sales of Nintendo’s predecessor, Bayonetta 2 gets another chance to shine and perhaps attract those who missed out on it the first time around.

Technical analysts can throw around numbers about resolutions, framerates and overall performance but Bayonetta 2 on Switch is, effectively, the game Wii U owners know and love, for better or worse!

The game begins with all-out action and rarely lets up for the duration of the 10-hour story. After an initial battle to help become accustomed to some of the controls and techniques, you’re introduced to several of the characters Christmas shopping, of all things. It’s at this point you’ll figure out quickly whether the story and eccentric characters are going to gel with you as it certainly isn’t going to be for everyone, myself included.

During cutscenes, the camera takes every opportunity to zoom around Bayonetta in an almost perverse fashion, tantalising the merest glimpse of flesh. Add to this the unnecessary swearing, questionable humour and oft-irritating dialogue and you may be thankful for the ability to skip every cinematic with a couple of button presses, especially when Loki is introduced and the back and forth of hearing ‘Love’ and ‘Little One’ every other line edges your finger towards the mute button of the TV remote. 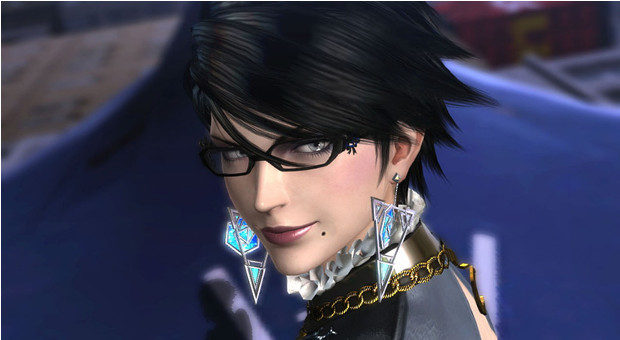 Peripheral criticisms aside, it is the fast and fluid combat that really makes Bayonetta 2 sparkle and elevates it above many other games in the genre. You’ll start out with guns attached to Bayonetta’s hands and feet with dozens of combos at your disposal, something you can practice during loading screens. The variety of combat options increases as you progress with new weapons becoming available from Rodin at the Gates of Hell including swords and whips.

Despite the plethora of attacking possibilities, the most important part of fighting may just be using ZR to evade enemy attacks. Dodging a strike at just the right moment will activate ‘Witch Time’ where everything slows down and the screen turns purple. It is during these moments that you can take the opportunity to deal plenty of damage before preparing to sidestep the next onslaught and do it all over again. The action is so smooth and satisfying with ‘Witch Time’ providing the perfect reward for taking the risk of evading attacks at the last possible moment. Hitting enemies will also fill a magic gauge that eventually leads to opportunities to perform torture attacks on a single foe or unleash Umbran Climax for more powerful attacks at anyone in your sights. 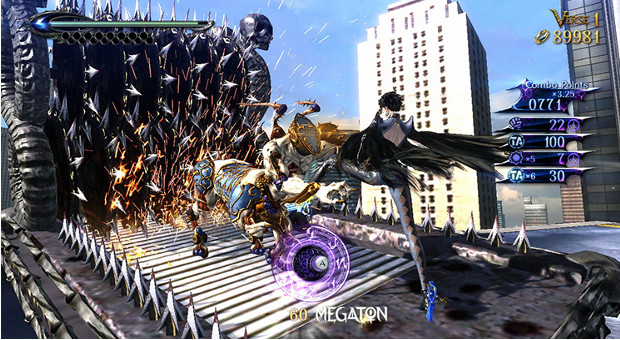 The combat mechanics are highly satisfying with plenty of depth for those that wish to push themselves to battle as efficiently and elegantly as possible but, for the most part, button mashing will take you where you need to go providing you have a decent grasp of moving, dodging and a generous supply of herb lollipops to restore health. Whatever you’re pressing, the controls are beautifully precise and responsive, something which is particularly important when you encounter one of the game’s many bosses all of which have a significant presence and unique attack pattern. In true Platinum Games style, they’re always something of a spectacle!

Between battles, there is some light exploration to discover items to aid you on your quest as well as the opportunity to enter the shop mid-level or one of the many Muspelheims scattered around that offer a reward if you complete a specific task laid out as you enter such as defeating all enemies without taking damage or never touching the ground for the duration of the battle. These challenges can be repeated as often as you like until you are successful with Witch Heart Pieces that combine to increase your health bar or Broken Moon Pearls that expand your magic meter often the recompense.

Bayonetta 2 progresses smoothly with nothing, other than perhaps the cutscenes, ever spoiling the flow and no areas outstay their welcome. The music and sound effects accompany the gameplay perfectly and the visuals are good without ever being particularly mind-blowing. It certainly looks like a last-generation title but when you’ve got something as impressive in the palms of your hands and you’re dispatching foes at a blistering pace any qualms about texture quality are unlikely to be of concern. 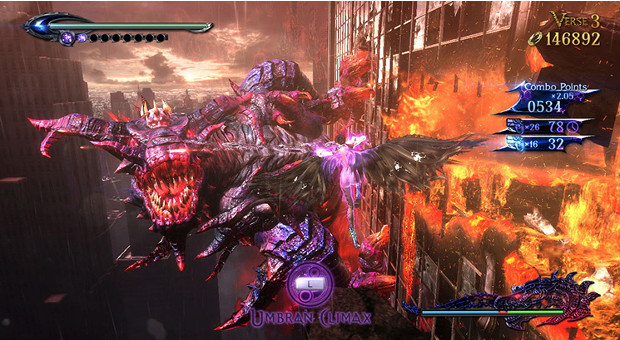 In addition to the unlockable weapons mentioned before, you can also obtain different costumes for Bayonetta either with Halos, the game’s currency, or by scanning in Amiibo such as Fox McCloud and Samus Aran. While these can change your appearance, they also have unique features such as the ability to go into Morph Ball, Metroid-style or even controlling an Arwing late in the game.

Throughout the single player story, you’ll occasionally gain ‘Verse Cards’ that unlock battles in Tag Climax, the multiplayer component of the game. It was possible to play this mode online or with the CPU in the Wii U version but there’s the additional option of local co-operative play on Switch, though ‘co-operative’ may be a touch disingenuous. The aim is to combine with your partner to take down a raft of foes but you’ll absolutely want to score better than your co-player and obtain as many halos as possible to aid you in the main game.

Bayonetta 2 makes a successful transition to the Switch and gives the Umbra Witch another much-deserved chance to shine on Nintendo’s latest hardware. Questionable sexualisation and irksome characters aside, Bayonetta 2 is a spectacular game that more than whets the appetite for the already-announced third outing. With the original Bayonetta thrown in as a bonus download with the physical version of Bayonetta 2 or available at a discounted price if purchased from the eShop, there’s plenty of incentive to battle it out in style with the Lumen Sages at home or on the go!

...it is the fast and fluid combat that really makes Bayonetta 2 sparkle and elevates it above many other games in the genre.