Genres and styles can be tricky concepts to pin down in videogames. These days, if I describe something as an “Adventure game”, it may evoke something like an action game set in a large explorable 3D environment, and it’ll likely feature swords and sorcery. But there was a time where an “Adventure game” referred to a quieter experience, a narrative where the player character wouldn’t fight, merely solve problems and remove obstacles by simply walking around, talking to people, and using any items they found in logical or creative ways. This is the sort of experience that the South African studio The Brotherhood has set out to create in their newest game, Beautiful Desolation.

Experienced readers may have realised I’m talking about the style of game now known as a “point&click”, so called because you control your character with a mouse, clicking on any point on a pre-rendered background, which your character will then move to, or interact with. Beautiful Desolation follows the same principle, with a slight twist: the perspective is entirely isometric, which is unusual for this genre.

Indeed, a hasty eye may glance at these screenshots and think it’s meant to be an old-school RPG (such as Baldur’s Gate, or classic Fallout) with character customization, combat encounters, and such, but that is not the case. Beautiful Desolation does feature a lot of environments to explore and discover, but its focus, the true meat to this game’s bones, is in its story and narrative. 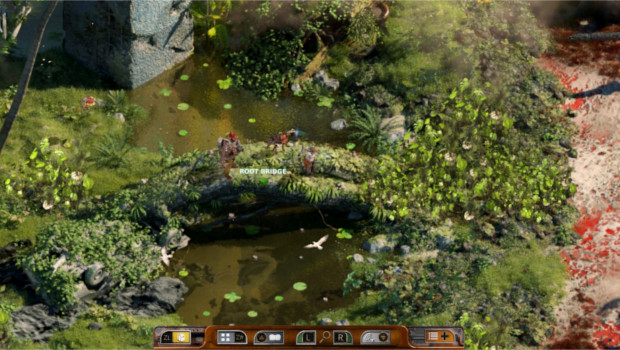 Set in a somewhat alternative reality to our own, the game’s story starts in the 1970s. A mysterious, gigantic alien structure suddenly appears off the coast of Cape Town, carrying with it vast amounts of highly advanced technology. The object, soon named “Penrose”, allows human technology to advance at a much faster rate than it did in real life, leading to things like functioning tablets decades before the 2010s, or various new war robots. Local citizen Mark Leslie, along with his brother Don, decide to investigate the Penrose by themselves, but as soon as they sneak onto it, a mysterious light sends them forward in time to the far future, into a post-apocalyptic version of South Africa, well after some sort of terrible war occurred (though the Penrose still ominously stands in place). Mark makes it his mission to find a way to return to his own era.

Now, I’ve seen post-apocalyptic sci-fi before, even in videogames. Indeed, this “alternative ruined future” resembles Fallout in concept. I assure you though, that this desolated South Africa has an identity all of its own, with humans that live as mere skeletons (because advanced medicine allows one to survive extreme injuries), a city of people who commune with symbiotic mutated worms, or intelligent fungi who take humanoid form. And just to keep us grounded, some places are simply made up of regular humans wearing traditional African masks (and I trust they look genuine).

Part of what makes this setting work are the highly detailed environments. You’ll often see various NPCs going on about their lives, some functioning machinery, or simply some surprising element in the background. Plus, they were done using photogrammetry, so you know this rustic-looking sci-fi has a genuinely South African look to it, either from the dozens of acacias spread through the game, or from the ruined buildings one can find all over the place. As such, I highly recommend playing this game on your TV, as these details are better appreciated there than on the Switch’s smaller screen.

The sound direction is unusual, mostly being devoid of music, but filled with immersive sound effects. Seems that The Brotherhood was willing to let natural sounds speak for themselves. This was the right choice for most of these desolated places, though it is jarring to enter a busy bar, and find that it is just as quiet. Even worse when you see holograms dancing to non-existent music. To my memory, the only parts with noticeable music were in the overworld (the wide space between towns and other places of interest), where it was still inconspicuous. 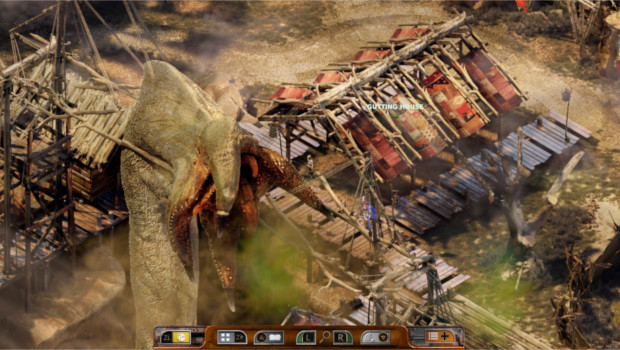 ...Do these folk go on "worming" expeditions?

The story and dialogue are also there to complement the worldbuilding. You’ll spend most of your time travelling around the place, talking to people in settlements, learning more about them, their culture and needs. Unusually for most games praised for their plot, this one has relatively few dramatic moments scattered throughout. Even the various FMVs (which look pretty good) are focused more in setting a mood than showing some shocking development.

Any dialogue in this game is great to parse through, though. First of all, it’s the only opportunity you’ll get to see many of these oddball characters and species close up. Second, the voice acting is superb, not only in making many sci-fi tropes work (such as robotic voices), but also in giving NPCs a wide variety of South African accents. I know it’s a bit jarring, hearing robot soldiers produce a thicker accent than that of our human characters’, but it is the world they live in, and it’s a joy to hear it. Finally, the writing is quite good, mixing just enough mystery and exposition to keep you engaged in learning more about this world.

Dialogue choices pop up very frequently. These have more to do with the sort of personality you want Mark Leslie to have (sometimes, the only choice is between “No”, “Please no”, and “Fok no”), and the sort of relationship you want him to have with other characters. They rarely affect your progression in any major way, but they do influence the character and tone that the lategame will show you.

Not to say you can’t make major choices in this game, but these are made in a different way (let’s just say there’s more than one way to solve certain puzzles), and the fact that you can make that choice is properly conveyed to the player. 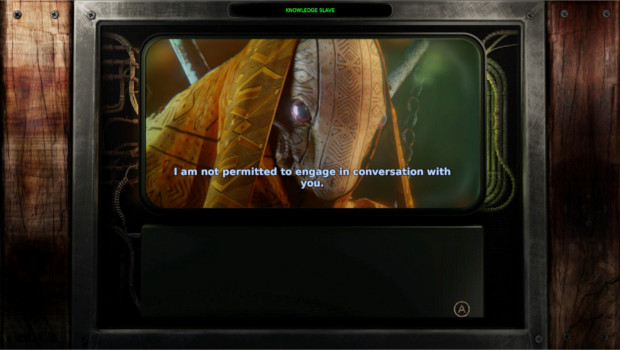 Ah, but you already did!

Story and setting are all well and good… But how does this game play, exactly? It’s a PC point&click game that was ported to the Switch, did the transition work? Well, the way to control Mark himself is actually pretty straightforward. You move him around with the left joystick, and you can pick up an object, talk to people, or interact with devices by pressing A near those respective spots. This process may be even easier than the norm, since despite the busy backgrounds, there’s no question as to what you can interact with or not (these spots glow in various ways). Pixel-hunting is not an issue.

The puzzles are your usual point&click faire, with figuring out which items should be used where, which items should one combine, and such. Some puzzles get a bit more complex (like one where you should figure out a password by looking at some documents), but the solutions always make sense. No moon logic here, either. And if you’ve taken a break from the game for whatever reason, there’s an objective list always ready on one of the menus.

But other aspects can get weirder. There are multiple background elements where it’s obvious you were meant to click on them in order to read a description on a textbox. In the Switch version, you press the “-“ button, and all of the textboxes show up on screen at once. It can get difficult to read if they pop up near each other.

Even weirder, there’s an issue in figuring out where you can walk or not. Backgrounds are detailed, but in the wilderness, it’s hard to know if you can go through a bush, or even to notice if there’s a hole on the floor, which means it can be tricky to figure out if a certain path is blocked or not. This isn’t a major deal on foot… but the same thing happens while on the airship! There’s often no clear way to determine which mountains block your path or not, which is needlessly frustrating. Thankfully, there’s an auto-pilot for the ship, but in a game about exploration, it’s a shame to see such impediments.

Another thorny issue are the menus. There are multiple menus in this game (one for inventory, one for the ship radio, one for physical drawings & documents, etc.), which isn’t a problem per se… but they all require different interfaces. The d-pad is fine to pick an item from that menu, but if you use it to parse through the documents, it kicks you out from it instead. You press A to confirm in most menus, but the item menu arbitrarily demands the X for that. Furthermore, other interactive devices throughout the game produce their own specific menus as well, and this inconsistency remains.

This is awkward enough as it is, but it reaches the point where glitches occur: I got stuck for a while on a simple puzzle because the game was somehow opening a terminal and the item menu at the same time. 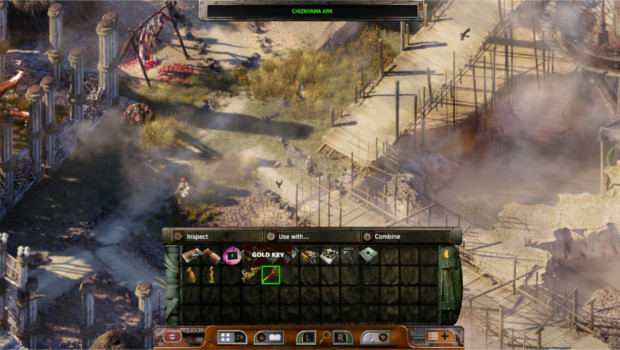 Who knew menus could cause so much grief?

Despite its issues, Beautiful Desolation is very aptly named. It’s a game about a rustic, ruined world, but one that shows the quiet beauty one can still find in it. As far as old school adventures go, this is one of the better ones, with an ambiance and pace that fits the genre like a glove. Furthermore, it presents us with a world that’s fascinating to explore.

My own playthrough lasted some 11 hours, but considering the choices I made, I’m left wondering if I can go back and re-explore this world in a whole new manner.

It’s tricky to fully convey the strengths of a game when it is so story-focused, but if you’re looking for an immersive story, or if you’re just a fan of interesting science fiction, then Beautiful Desolation should be right up your alley.

Beautiful Desolation is a story-driven game that largely delivers in the tone and depth it aims for. Despite some of the gameplay flaws it showcases, it’s fair to say that it should satisfy anybody looking to explore a unique and fascinating world.

Any dialogue in this game is great to parse through, though. First of all, it’s the only opportunity you’ll get to see many of these oddball characters and species close up. Second, the voice acting is superb, not only in making many sci-fi tropes work (such as robotic voices), but also in giving NPCs a wide variety of South African accents.