Brothers: A Tale of Two Sons

Video games are a unique form of media for our time. The level of interactivity is something you’ll never see in something like books or film. This isn’t something that we really saw back in the early days of gaming, mostly due to hardware limitations. As gaming evolved over time, developers were able to expand on what a game could consist of. I mention this because Brothers, the game I’m reviewing, isn’t what the typical person would think of when it comes to games.

On the surface, Brothers seems like a puzzle game with a neat concept of controlling two different characters at once to traverse various obstacles and it certainly is at times, but as I continued playing it, I started getting the feeling that my initial assumption was misguided. But I’m getting a bit ahead of myself, so I’ll start with some history of this game.

Brothers was originally released on the Xbox 360 back in 2013, it has since released on several platforms and has even won a BAFTA for “Best Game Innovation” I never played it though. I was certainly interested, but for whatever reason, I never got around to it. So when this came up for review for the site, I volunteered myself for it. 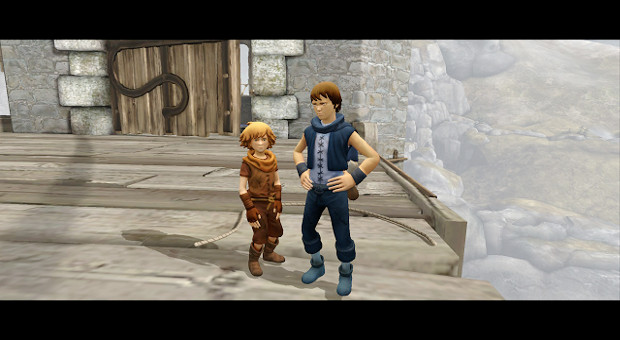 Don't look at me like that, I've written three whole reviews now!

The story follows two Brothers, who have a terminally ill father. They are told that out in the world, there is a tree that holds the cure for this illness and the two siblings go out to locate it. It’s a very simple tale, but there was something about it that felt genuinely heartfelt. I guess if I had to place it somewhere, it would be in how the story is told. There’s basically no dialogue throughout the whole game. The characters communicate with gestures, tone and a language loosely based on Lebanese Arabic. It’s a great form of “Show, don’t tell” that a lot of plot-driven games fail to utilise.

The controls are suitably simple to grasp. Each brother is moved around with one of the two sticks and the ZL and ZR button lets each brother interact with their surroundings. You can also move the camera around with the L and R buttons, but this isn’t really required too much. The game foregoes all semblances of a HUD (Apart from one prompt explaining what the “interact” buttons are) in order to provide a more immersive experience. Honestly, I usually dislike when games remove information for the player for the sake of immersion, (I’m looking at you, Breath of the Wild) but for this game, it works. The two brothers have simple controls and there’s no kind of health bar or anything like that, so its fine that you’re not told about things and it opens the game up to experimentation. 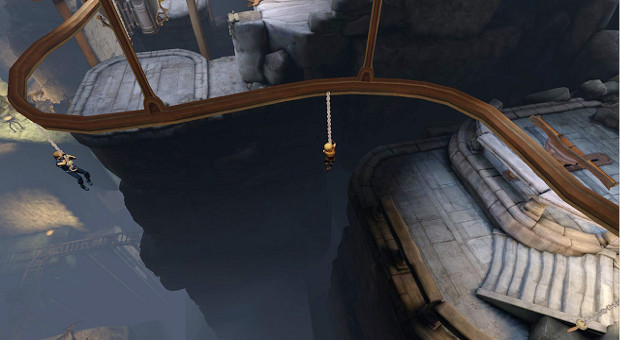 This kind of experimentation is how you discover the innate abilities of the two brothers. The older brother is stronger and more mature, which can help with talking to other people, while the younger brother is smaller and more mischievous. Each brother has different reactions to what they interact with and it’s that kind of small detail that helps to inject some personality to the world. It’s not exactly challenging, with the trickiest thing you’ll have to do is demonstrating some dexterity with controlling two characters at once, but I never found this to be a detriment to the game. Along their journey, you can discover a number of characters that each have their own problems that the brothers can help with, there’s no reward for doing so other than the satisfaction with helping someone sort out their life problems. It’s not exactly a long game, either. It took me just over 2 hours to see the credits, which might be a bit of an issue, given the price. It kind of lacks replay value as well, which doesn’t help.

This Switch version has a couple of exclusive features to it. The most obvious one being a native two-player co-op mode. With each person controlling one brother, it can provide a fresher take on the game for any potential double dippers. Technically, you could always just share a controller, but it’s nice that the feature is here. There’s also a 50-ish minute commentary on the game which is always something someone as nerdy as me appreciates. Something that I learned from it is that the camera always tries to keep the younger brother on the right hand side of the screen, because the right stick is used to move him. There’s also some concept art to look at.

Speaking of looking at, the game doesn’t have the best graphics on the Switch, but seeing as this is an Xbox 360 indie game port that had a tight budget, I can forgive it. Some of the scenery is really nice to look at though. The soundtrack has a couple of notable songs, but all in all, it’s very subdued, opting to use atmospheric sounds instead. 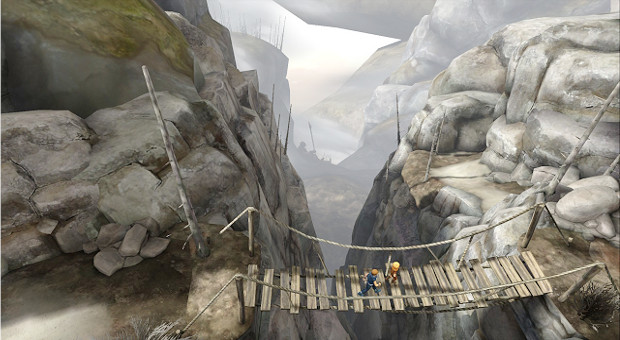 I'll admit to stopping to take in the view on more than one occasion.

Brothers is certainly an interesting game, it’s aged a little, but the gameplay holds up nicely. It’s not the kind of game that just anyone would enjoy, some might find it too easy, or too short, or too plot-focused. But I enjoyed it. It knows what it wants to be, a heartfelt fairy tale style story that has some great story beats. If you’ve never played it, I would suggest giving it a go and seeing why it won that award in the first place.

Brothers is certainly presented as more of an experience than a game, but if that’s the kind of thing you enjoy, then you should definitely consider picking this up. It’s a heartfelt game that clearly has a lot of love put into it.

The main gameplay mechanics are intuitive
The plot is simple, yet brutally effective.
The co-op mode is a natural fit for the console and the game.

It’s really short.
If you’re looking for a challenge, you won’t find it here.
The graphics have aged a little.

Each brother has different reactions to what they interact with and it’s that kind of small detail that helps to inject some personality to the world.