I’m sure I wasn’t the only person who was taken aback by Nintendo deciding to release new downloadable content for one of the ported WiiU games that the Switch currently enjoys. I was probably more surprised that it wasn’t Mario Kart 8 Deluxe receiving this treatment. Instead, we have a new batch of levels for one of the most charming Mario spin-offs we’ve seen in recent times.

For those not in the know, Captain Toad: Treasure Tracker is an action puzzle game which tasks you with guiding the titular Captain (or Toadette) through a variety of small diorama-like levels in order to collect Power Stars and progress. Instead of the tight platforming action that the Mario series is known for, Captain Toad’s adventure is more slowly paced, with a focus on manipulating the camera and navigating around the many obstacles our intrepid mushroom people face with. Captain Toad can’t jump because his backpack is too heavy, so you have to use some imagination to succeed. 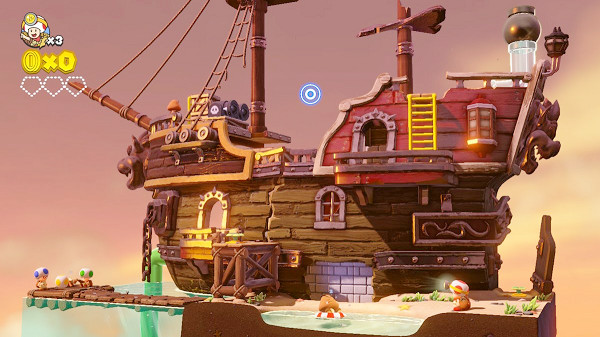 Looking for treasure on a pirate ship? That's a bit on the nose...

The original game was reviewed back in 2014 by fellow reviewer Jonathan Stanley and still applies to the base game itself. (Although, you should probably ignore any mentions of the WiiU Gamepad) This review, instead, will focus on this specific DLC and any features that are new to the Switch version.

The first thing to mention is that the DLC consists of 18 levels. Seven of them are new, while the rest are levels from the base game with new twists to them, such as collecting small crowns in quick succession to levels littered with everyone’s favourite ghosts, Boos. The new levels are just as solid as the ones you find in the main game, offering unique mechanics to traverse. And while it’s a little disappointing that some levels are reused, you can’t really complain, given the price. I certainly feel like fans of Captain Toad will get their money’s worth.

Just like the original adventure, each level has 3 diamonds for you to find as well as a bonus challenge that can help add a bit of difficulty to what is still, a very easy game. There certainly is nothing wrong with a simple game. It shouldn’t take much skill to get to the end and I was pretty much done in just over an hour. 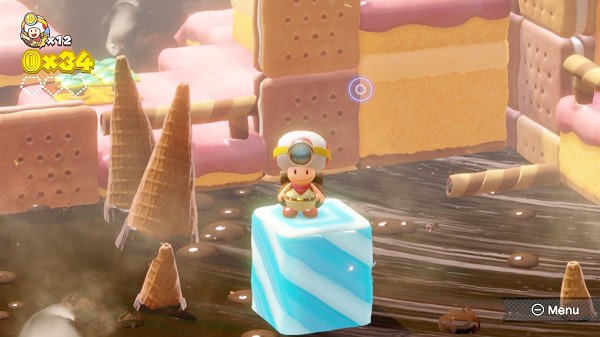 Captain Toad there, possibly regretting the life choices that led to this.

The Switch version of the game uses gyroscopic controls to replace the WiiU Gamepad functionality. So you can still interact with elements of the level by aiming a reticule around the screen. It works well enough and feels pretty intuitive. A neat feature that was added in a recent patch was the ability to play the game with a friend in a 2-player Co-op Mode. Allowing for double the adventure. At least, that’s how I think the adventure to people ratio works, don’t quote me on that.

The game retains its charming visual quality. Each level is nice and colourful, which really allows the art style of the game to shine. The music is still as catchy as ever with an all-round solid soundtrack to track treasure to. This helps to make the game an utter joy to play, a nice relaxing romp that will leave a smile on your face. 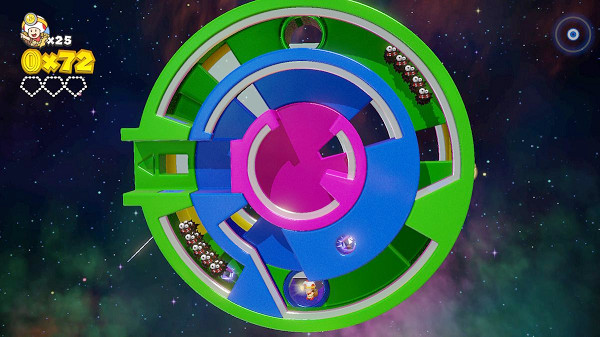 Some of the new levels can be a bit puzzling to traverse.

This relatively short DLC provides more of what makes Captain Toad so good. If you want just a bit more adventure on top of all the adventure that the original game offers, then this is a great investment for about the price of a meal at your local fast food restaurant. I know which one I’d rather buy.

Captain Toad’s Special Episode is cheap, cheerful and provides a bit more Captain Toad for those of you who want exactly that. You’ll probably see the end in less than a day, but it’s worth every penny.

The gameplay is still as fun as ever.
There’s some really cool level ideas.
Co-op mode adds a new level of fun.

You’ll be done with it pretty quickly.
The majority of the package is very easy.
It would have been nice to have a few more new levels.

Just like the original adventure, each level has 3 diamonds for you to find as well as a bonus challenge that can help add a bit of difficulty to what is still, a very easy game.