What makes a good Metroidvania? The series that named the term are very beloved and distinguished, and it’s been a very popular genre for indie developers to tackle, so there’s no shortage of love for this type of game. It’s easy to get lost in the crowd, but Dandara attempts to overcome oblivion by taking its own spin on the genre, looking to stand on its own merits.

Though first released on the Switch back in 2018, it has since then been updated in March 2020 (the Trials of Fear Edition) with a significant amount of new content. For free. We have its Brazilian developers Long Hat House to thank for this generous upgrade, and considering this is how the game will stay going forward (on every platform), this review will focus on what it is like post-update.

Dandara’s main “hook” is how different its movement feels. Metroidvanias usually stick to traditional platforming mechanics, but the eponymous main character Dandara cannot walk nor run: she exclusively moves via jumping. And not even traditional jumps, she must zip from surface to surface (and only ones with white colouring at that. I think it’s supposed to be salt), with no concerns as to where gravity lies. Dandara zigzags her way across an environment that most other videogame protagonists would just run or climb through.

This might sound gimmicky, or even disorienting, but the developers dove into this mechanic in full. Environments are tailor-made with this kind of movement in mind, taking advantage of its strengths and limitations alike. Even the controls, originally conceived for mobile platforms, work great with the Switch’s more traditional controllers, allowing the player to “snap” easily into any platform in the general direction they’re pointing. It even makes good use of the HD rumble, with very subtle variations being felt with each action. And the game can still be played with the touch screen if you prefer. 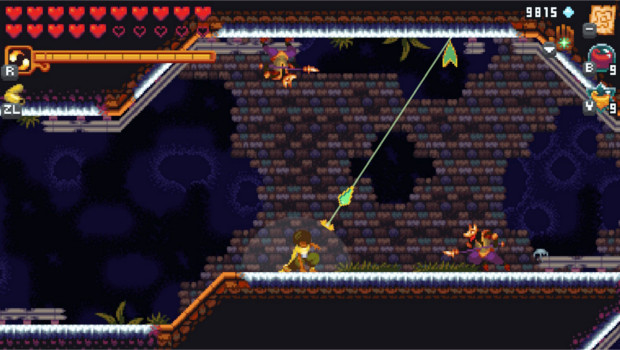 This unconventional movement leads to equally unconventional enemy encounters. Dandara’s main attack consists of a beam that must be charged in place, taking roughly one second per shot. It’s a very unsafe option if you’re not careful, which means that most enemies need to be dealt with some caution, looking for the safest spot to attack from (or luring them to a more advantageous position), and making sure you exploit any opening you get. A lot of fights will consist of rapid dodging, then countering.

Perhaps that description is not so unconventional. After all, games such as Dark Souls have been following a similar philosophy for a while now. Indeed, Dandara takes a lot of inspiration from that series, from its checkpoints (campsites, as you were), to the way death works (you will lose your loot, unless you visit your previous corpse to retrieve it), and there’s even a dedicated “drink potion” button.

As you may have guessed, Dandara is a challenging game. The difficulty curve is smooth enough to ease you in each step of the way (and the game even includes difficulty-reducing options in case you need them), but it is clear the developers want you to get good at this game. Some of the obstacles, enemies, and gauntlets you run into near the end of the game can be quite hard to overcome... though they are never unfair. For the gamer who appreciates a good challenge, Dandara’s got you covered. For those who are intimidated by high difficulties, the accessibility options have you covered as well. 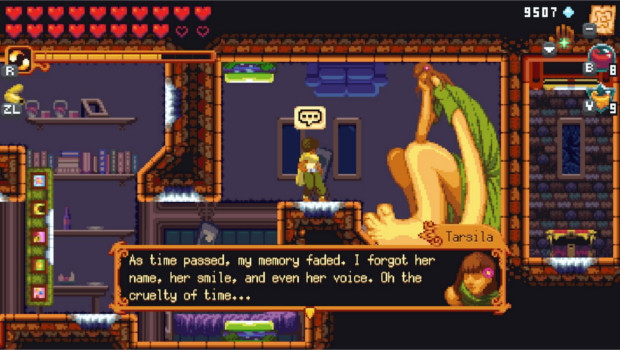 "I even forgot why I bought such a small sofa"

Graphically, Dandara is absolutely gorgeous. The spritework is absolutely phenomenal, from the minor shifts in movement on Dandara herself, to the larger, imposing characters who seem to have a life of their own, the animation is filled with detailed mannerisms. Very fluid too, as the game doesn’t suffer a single hiccup.

Good thing too, because the art direction here is quite ambitious. As you might expect from a world where gravity doesn’t matter, the environments can be surreal. Traffic signs or bookshelves can just as easily be on the ground as on the wall, and the inside of a café can present an impossible perspective. This isn’t just a matter of layout, considering several characters and enemies are sporting a look that’s more symbolic than logical.

Furthermore, the visual variety on display is quite impressive. From graffiti inspired by real life Brazilian streets, to the eerie landscapes of the dream lands, or the opulent villain’s sci-fi fortress, no two areas feel similar in tone. And it is a wonder that all of this is realized so well.

A lot of this is aesthetic background work. The level layouts themselves are always easy to read, and traversing each room isn’t much of an issue… most of the time. 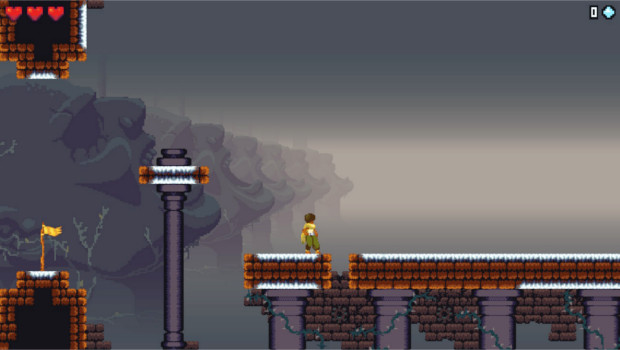 It's just a straight path... right?

Due to the unique nature of Dandara’s movement, you’re likely to hit a few corners where you can’t simply move from one place to the other, even though it looks like you should. Any other videogame protagonist would jump that pit or fall through that hole, but not Dandara.

Because of this, it isn’t always clear which rooms you can cross right away or not. You eventually get a feel for which areas are difficult to traverse, but you’re always going to need to make mental notes of where you can go or not. In my experience, this makes exploration more engaging, since level layouts become more memorable this way (a bit like figuring out a maze with an unmarked map), but it could be unintuitive for some.

Within the Metroidvania genre, this game makes some interesting choices. Most of the mandatory items for progression don’t really change anything in Dandara herself, rather, they change something in the world (frozen gears may start moving after finding a certain item, for example) or in the way you interact with it (like an item that allows you to operate jump-boosting machines). However, there are also several optional items scattered through the world that do add to Dandara’s arsenal (a new attack, or a permanent power boost, or an increase in potions, or…) if you’re inclined to explore. In other words, your playable character only gets truly stronger if go off the beaten path from time to time.

Interestingly, this doesn’t include things like health upgrades. This is because Dandara also operates on a level-up system of sorts. Throughout the world, by clearing debris, opening chests, defeating enemies, etc. you gain these “salt bits” that function like experience points (and it’s the sort of loot that gets lost if you die). You can use these on a campsite to increase stats such as health (but not attack power), so you can still improve in some respect, even if you don’t find the offensive upgrades.

The bosses in this game are also worth a mention. Though few in number, every single one of them is memorable, whether it is due to their looks, presence, or creativity within the fight itself. They’re a highlight of any playthrough.

And what does Trials of Fear bring to the table, exactly? What even is it? Well… it’s an update that adds several new areas to the game. More places to see and explore.

Well, there’s more. First of all, yes, it’s a significant increase to the game’s map (roughly 150%, nothing to scoff at), and it can easily turn an 8 hour game into a 12 hour game. But within that new territory lie new items, new challenges… and even a new ending. Yes, the Trials of Fear actually unlock a new final boss if you fully complete them. This goes beyond simple addition, as this reshapes how you think about the whole game’s structure.

Furthermore, the new areas become seamlessly available through any normal playthrough, and it is entirely possible to stumble onto them while simply playing the game. As such, the game opens up immensely at that point, giving the player a lot more freedom on where to go. A boon for any Metroidvania worth their salt. 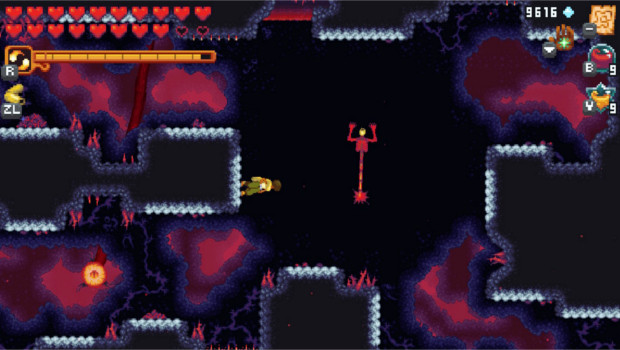 Though I may have stumbled into the wrong neighbourhood...

...There has been a lot of talk about salt in this review. Likely because that’s the name of Dandara’s world: The Salt. It might be a good time to talk about the plot. At face value, it’s a simple story about a hero called Dandara that sets out to fight an oppressive villain that seeks to control the world.

But as is usual with this game, there’s more than meets the eye. Different regions of The Salt have oddly abstract names (such as Crib of Creation or Desert of Remembrance), the specifics behind the characters (their origins, methods, motives, etc.) are left intentionally vague, and even death has a different name (“Oblivion”. Because being forgotten is akin to death in The Salt).

These are all marks of abstract storytelling, that is to say, what a character or action represents within the narrative matters more than the specifics of the lore (which often does not quite add up). As such, multiple interpretations can exist, from those who examine the meaning behind Dandara’s struggle, to those who see The Salt as a metaphor for the human mind. How many layers of meaning can one find?

From my own Portuguese perspective, I can’t help but see the “Brazilianity” surrounding this game. You see, Dandara is the name of a real historical figure in Brazil, a former slave who fought colonial oppression. It’s hard for me not to see it from that lens, considering there’s a significant amount of references to Brazilian culture here, for those willing to look for them.

On a final, and hopefully lighter, note. Dandara’s soundtrack is excellent, providing a series of fitting ambient tracks, from the simple hollow winds of the abandoned village to the otherworldly sounds that pervade some of the later areas. The boss track in particular, “Weight of a Doubt” stands out as exceptional.

Dandara is a game that rises above expectations, with almost every aspect of it impressing in some way, shape, or form, and barely any flaw of note. Truly a gem among indie titles on the Switch.

Unconventional movement might be disorienting, depending on the person

Within the Metroidvania genre, this game makes some interesting choices. Most of the mandatory items for progression don’t really change anything in Dandara herself, rather, they change something in the world or in the way you interact with it.