The Roguelike structure is quite the popular one when it comes to indie games these days. Done right, it can provide a wealth of entertainment where each play session is never quite the same as a previous attempt. Randomly generated content can make for a large amount of replayability that can help make a game last a lot longer. I’ve certainly enjoyed a few, whether it is the more traditional Mystery Dungeon series, or the interesting rhythm game take that Necrodancer supplies.

Deep Space Rush instead opts for the 2D side scrolling shooter as its structure. The goal is simple, aim to get as far as you can, using the wealth of weapons you find along the way, without dying. You have your jump and double jumps, the shoot button and movement. I wouldn’t be able to tell you much more about it, because that’s pretty much it for how the basics go.

Inevitably, you’re probably going to cop it and die, which will then give you the option of visiting the shop, where you can spend any money you collected on permanent upgrades such as more health, a more powerful gun or the option to add some pickups to the pool of randomly generated items. That last one is interesting, as in theory, it provides a wider arsenal of tools to help you get a higher score. 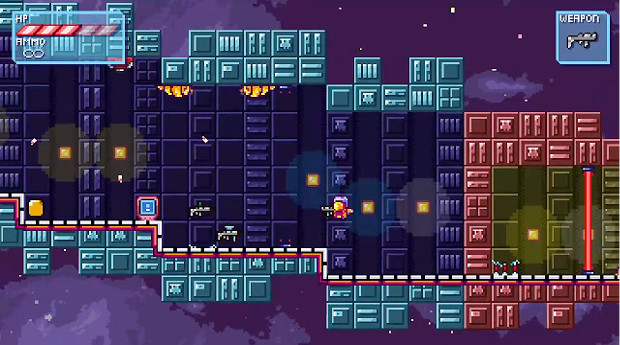 Seeing as you can only carry one weapon at a time, it's not much use if they spawn right next to each other!

But after a while of playing this, I noticed something. It seems that the more stuff I was buying from that shop; the less often I was seeing particular pickups. So, I decided to delete my save data and only buy 3 specific things, the health upgrades, the strongest starting gun, and the shield powerup. What resulted from that is a randomised pool of precisely one item, an item that made me nigh-on invincible as I bulldozed through everything to a dizzying high score of almost 2,500 points. Because that shield was the only thing that appeared, I was able to constantly refresh it before it ran out by just picking up another one later on. By the time I finally took damage, I died in one hit because the damage received had scaled to such a high degree.

To be frank, this exploit makes it so that you’re better off ignoring 70% of the permanent upgrades because buying them would just make it harder to do well, which I can’t help but feel isn’t the point of them.

After I achieved that score, that pretty much wrapped up everything I can do with this game. There’s no kind of end goal, as it’s more of an arcade style score chasing kind of game and there aren’t any alternate modes to mess around with. For 5 quid, I wasn’t expecting much content, but this still feels like it was light on that aspect, unless you’re really into high scores, you’re not going to find much here. 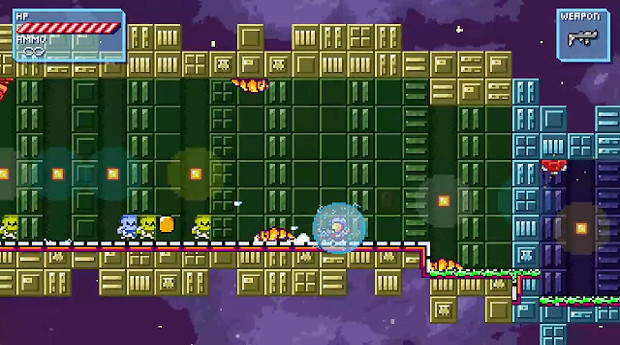 Why bother shooting when you can just do your best freight train impression and run through everything?

The visuals are obviously inspired by the 8-bit style that is all so prevalent and there isn’t much to criticise on that front, the same goes for the audio, there’s a selection of songs that randomly play every time you start a new run to keep it from feeling too repetitive. It’s a perfectly OK soundtrack, but I can’t say I’ll be humming it now and again.

This review was admittedly short compared to my previous ones, but that’s simply because there isn’t much to say. Even for 5 pounds, you’ll be hard pressed to get your money’s worth here. If you really want to get this, I’d probably wait for a good sale.

Deep Space Rush is a simple side scrolling game which is ultimately undone by its simplicity, there just isn’t enough there to warrant dropping 5 pounds on. A few alternate ways of playing would have gone a long way.

There’s no kind of end goal, as it’s more of an arcade style score chasing kind of game and there aren’t any alternate modes to mess around with.