You remember Terry Cavanagh right? I hope you do! Lovely Irish chap who made the brilliant VVVVVV and Super Hexagon? What!? You don’t!? Oh for pity’s sake! Go play those games… well, maybe after playing this one first.  Because it might just be his finest work yet!

Dicey Dungeons is a roguelike dungeon crawler where everything is governed by numerical cubes under the duress of Lady Luck herself.  You play as one of six, literal, dice; trapped in a Gameshow From Hell.  Your goal? Win the grand prize and obtain your freedom by fighting your way through waves of colourful foes, with the power of dice and a prayer to the great RNG above.  What sounds like a very simplistic setup belies a complex tapestry of gameplay mechanics and subsystems, that stretch the boundaries of what is possible with a six-sided die beyond your wildest imagination. 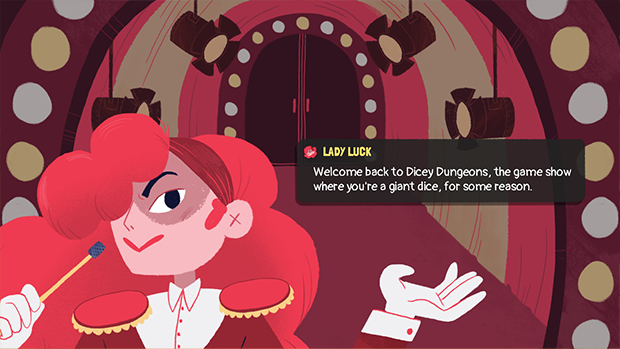 Just roll with it

At first glance, the game presents itself as a fairly basic roguelike, only with an old-school RPG battle system that plays out on a separate screen.  You have all the base elements of a roguelike in place, such as procedurally generated floor layouts, the stairs to descend further down the labyrinth, shops & items you find along the way and a big bad boss awaiting you at the end.  If that were all she wrote though, there wouldn’t really be much to write home to you about… Of course, there has to be a twist, and it lies within the game’s combat system; built around the concept of literal rolls of the die.

The battles play out much like a traditional turn-based RPG, where each turn begins with a roll of your dice.  The numbers you get then determine which attacks you can use and their efficacy on any given turn.  Each attack you deal or skill you use will cost at least one of your dice to use, and you only carry so many at a time; so think carefully about which die to place on which skill or attack on any given turn. 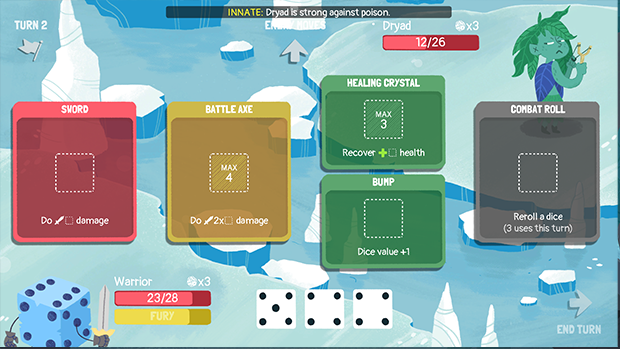 The most violent game of Yahtzee you’ll ever play!

Of course, you start off with just a basic attack, but as you descend, more abilities open up for you to equip as you find them in chests & buy them in shops.  You only have 6 slots to equip attacks & skills onto and some especially powerful ones take up multiple slots, so these become a precious commodity.  So too will you find that your HP becomes a precious resource, as healing items are scarce and often blocked by difficult encounters.  Even more precious are your six-sided friends; but as you level up? You are granted extra dice to play with, allowing you to attack more times within each turn!  These elements are all simple on paper, but they intertwine perfectly to make for a compelling gameplay loop that will sink its teeth right into you and never let go!

But that’s just the game’s structural foundation; what truly elevates the battle system is the myriad of overlaying gameplay mechanics.  Most of your attacks & skills come with strings attached; sure, your basic Sword will do whatever damage is on your dice, however, the Battle Axe is capable of doing double damage… but it’s limited to a maximum roll of 4! Some abilities might come with a countdown timer, where you need to supply a certain number of dice to use them, others might even specifically require a 5 to use!  Rolling a 6 is not necessarily the best outcome, and as a result there’s no such thing as a “bad” roll; it all comes down to the loadout you choose to build from the hundreds of unique abilities to find and be used throughout the game.  This is crucial, as it completely changes the dynamic of the gameplay from being based entirely on luck, to one where “luck” is something that needs to be managed.  Your resources are limited and your build needs to account for scenarios where you might not necessarily always get the dice rolls that you want.

Then there are the status effects, ranging from the expected (Poison:  Specified damage dealt per turn) to the unexpected (Lock:  Destroy a specified number of your opponent’s dice for that turn).  Oh, there’s Limit Breaks as well, which activate upon the player being battered enough and provide a critical boost that can turn the tides of battle.  Starting to sound complex? Oh, we haven’t even started yet… 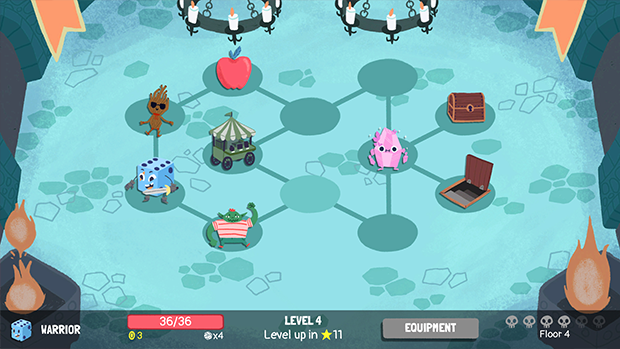 One thing that the roguelike genre is famous for is being able to combine mechanics together in unexpected ways… and Dicey Dungeons takes this concept to a ridiculous extreme.  This is a game that is designed to be broken, bent and warped to however you can interpret it, and the sheer degree to which it respects the player’s ingenuity is just staggering! If you can imagine something working? Chances are that it will work!  Take the ability Bump, which increases the value of your dice by 1 and then returns it to you; what happens if you decide to chuck a 6 at it? Well you get 7 of course, but since that’s not a valid dice number… you get a 6 and an additional 1 instead… which you can then reroll to make into another 6!  Oh, and those Limit Breaks we mentioned earlier? Want to trigger them sooner? Well some abilities will hurt you alongside your enemy, which can be exploited to trigger your Limit Break exactly when you want!  It’s brilliant stuff!

And this is a game where you are going to really need to exploit those fringe mechanics, because your foes will have no qualms about doing the very same to you.  Like VVVVVV and Super Hexagon before it, Dicey Dungeons is rock hard; and requires absolute mastery to survive the barrage of creative enemies, crazy game mechanical exploits, the surprisingly tough AI, and the ongoing limitations placed upon your character & your ever-changing abilities. 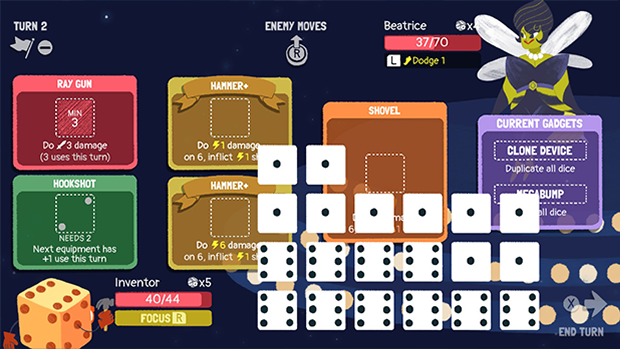 When the game doesn’t give you enough dice… just make more yourself!

If that’s not enough? Well, there are six different characters who each have their own unique mechanics that turn the game entirely on its head! Oh, and they each have six unique episodes with their own sets of unique rules that again completely change the way you play the game! (Do you think there’s a theme going on here?).  You start off with the basic Warrior, but once you get to the Robot? Now you’re playing Blackjack where you can choose to roll as many dice as you like, but go over a specified dice value limit and BOOM! You lose ALL of your dice and abilities for that turn!  All six characters feel totally distinct and all require you to approach the game in an entirely new way.  The game simply never stops throwing new ideas and concepts at you.  Even 50 hours in, I still found myself blown away at the sheer creativity & number of new gameplay mechanics being hurled towards me, and by just how much mileage Terry Cavanagh managed to get out of such a simple six-sided concept!  It’s almost overwhelming, but it’s delivered at just the perfect cadence to allow the player to come to terms with what’s being thrown at them and figure out how to exploit the new rules & mechanics in their favour.

Make no mistake, this is a hard game, and many of your runs will end in failure.  However, each run lasts no longer than 30 minutes tops, meaning that failure doesn’t actually set you back that far.  As such, you’ll find yourself wanting to try again and again, and never does the game feel unfair.  Even when runs die by an unlucky die roll, it is the quality of your builds and your ingenuity as a player that will see you through seemingly impossible odds; and thus you realise that failure came from a failure to prepare.  The difficulty is high, but so too is the satisfaction of finally getting through each episode you get stuck on.

The excellent gameplay is married to an equally excellent presentation.  Lush cartoon visuals perfectly sell the Gameshow From Hell setting, alongside bizarre & colourful Earthbound-esque enemies, funny dialogue and an outstanding soundtrack from Chipzel; who returns from Super Hexagon.  The soundtrack in particular is a real standout, combining chiptune with jazz to underscore the vibe of a 90s gameshow and it is an absolute scorcher! After finishing the game, I immediately purchased the soundtrack from Chipzel’s Bandcamp page and swung it onto my smartphone; and I suggest that you do the same. 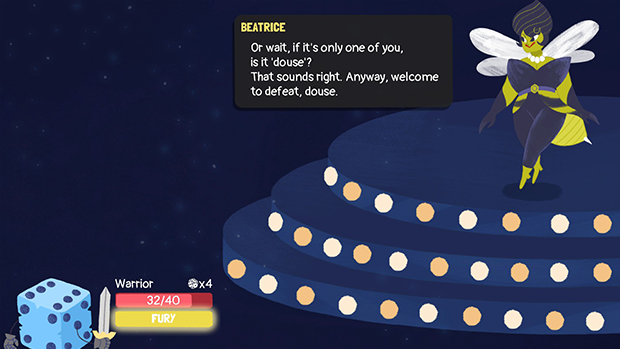 Don’t douse this game’s perchance for puns; they’re to die for!

The game’s interface is also very well designed and very intuitive; even though it was originally designed for use exclusively with a mouse.  On that matter, extra bonus points for enabling the game to be fully playable with touch screen controls only!  It makes for an excellent handheld experience, and a fabulous game to play with no Joy-Cons connected & with a capacitive stylus in hand.  While it still feels good to play with a controller on the big screen, it’s even better in handheld mode as it feels cosy and intuitive like a good DS game; and the short runs, combined with the ability to save anywhere, make this game an excellent bus ride or bedtime companion.

Dicey Dungeons is an excellent game that can be appreciated by even people who might not normally enjoy roguelikes.  It’s wonderfully simple to understand, intuitive to play, but oceans deep for those who can brave the challenge.  Much like The Legend of Zelda: Breath of the Wild, Dicey Dungeons rewards the player’s own creativity and ingenuity with its deck-building gameplay; but here, every mechanic has a distinct purpose that is explored and exploited to the fullest throughout the entire gameplay experience.  An absolutely essential purchase for anyone with a heart for exploring the limits of game design mechanics, and the stomach for a hearty challenge.

A six-sided concept with six-dimensional gameplay. Dicey Dungeons is one of the best roguelikes I’ve ever played, and the perfect example of how emergent gameplay mechanics can elevate a gameplay experience far beyond what such simple on-paper mechanics would suggest.

Incredibly creative and exploitable mechanics with enemy & scenario design that successfully pushes the player to push every one of these mechanics to their absolute breaking point.

Six characters, each with six episodes which ALL present unique and game changing mechanics. The sheer mileage that the developers wring out of the dice combat mechanics is astounding!

High difficulty may turn off some.

"Dicey Dungeons is an excellent game that can be appreciated by even people who might not normally enjoy roguelikes. It’s wonderfully simple to understand, intuitive to play, but oceans deep for those who can brave the challenge"