Nintendo systems have struggled for quality third-party software for the last few generations so it definitely came as something of a surprise when it was announced that a port of last year’s DOOM was coming to Switch.

Sacrifices were always going to have to be made for DOOM to make the transition successfully (and if you expected any differently you may need to adjust your unrealistic expectations) but could the essence of DOOM be maintained?

The simple answer is a satisfying yes!

Despite a considerable drop in the graphical quality and frame rate, DOOM on Switch feels like the fast, smooth and brutal gore fest that it was always intended to be. Sure, the frame rate may take a hit when the action is at its most intense and visuals appear blurry (particularly in handheld mode) but the art of shooting demons with increasingly devastating weaponry is as empowering as ever. The fact that this experience can be taken with you wherever you go due to the portability of the Switch is both impressive and one of the main selling points, especially if you’ve been through the campaign previously on PS4, XBOX One or PC.

You start out with a simple pistol used to clear areas of demons before you obtain stronger weapons like shotguns, assault rifles and rocket launchers as you progress. The lack of muscle in the pistol helps guide you to one of the most gratifying elements of the combat:Â  The Glory Kill! 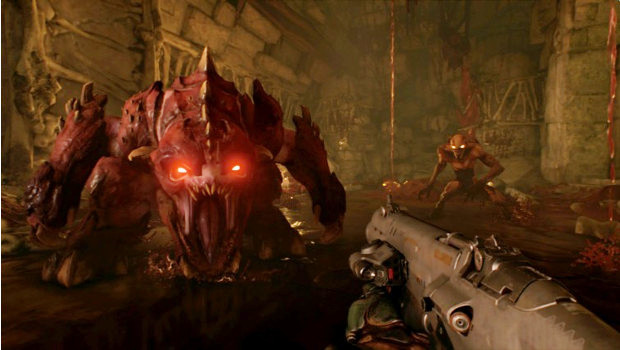 Doom really does contain the stuff of nightmares.

Weakening an enemy enough will cause them to glow, highlighting an opportunity to close in and perform a finishing move with a click of the right stick or a shake of the controller. The latter option never feels any more fulfilling than the traditional method, particularly when having to shake the entire system in handheld mode, but it’s nice to have the option available as you will be performing many glory kills throughout the 10-15 hour campaign.

The main benefit of the glory kill is an increase in the amount of health you will gain from dispatching a demon. There is no regenerating health here so every health drop can be vital, especially when you’re on your last legs. This element of risk versus reward is certainly one of the most compelling hooks of the adventure.

The campaign consists of 13 stages of running, jumping, shooting and hunting for keys, secrets and ‘Rune Trials’. At times, navigating certain locations and looking where to double-jump to next gives off a few Metroid Prime vibes though the action here is considerably heavier, something the music emphasizes when its rocky nature kicks in during intense battles with the demons. These demons often must be cleared to move onto the next part of the level and these waves of enemies can consist of demons ranging from easy-to-dispatch Imps to Summoners and Revenants. The exhilaration comes from taking down these foes as you try to keep your health above zero, which isn’t always an easy task, and you’ll find yourself running around doing your best to evade tougher enemies while you glory kill some of the fodderÂ  to give yourself just enough of a fighting chance to make it through the battles alive.

Combat is fun and challenging but the structure can occasionally feel repetitive as many instances of clearing the area of the demonic presence plays out in much the same way but it can definitely be thrilling. Frustration can occasionally creep in when you die towards the end of killing an entire horde and having to replay the section again but thankfully, unlike the original DOOM, there are regular checkpoints throughout each stage so you never have to travel too far to get back to where you were. 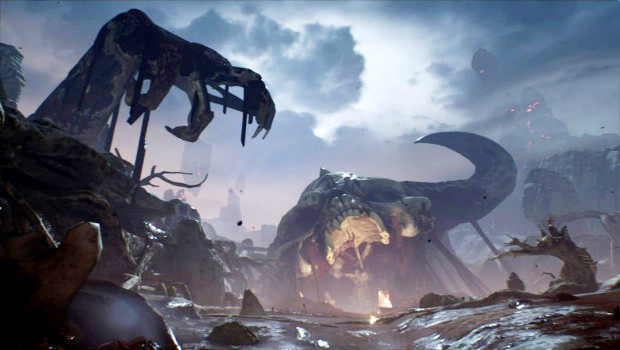 It's just like that one area in Breath of the Wild... only grittier.

The aforementioned ‘Rune Trials’ are accessed via glowing green runes you’ll find hidden away in certain levels. These trials offer rewards that improve your abilities if you can beat the challenge in front of you such as killing a number of enemies in a specified amount of time. They offer a nice break from the normal flow of the levels and it’s nice to know what you’ll win before undertaking the challenge so you can justify whether to spend the time clearing the trial or moving on.

When it is time to move on, it’s generally easy to see where to go next thanks to markers at the top of the screen directing you and telling you how far you are away from your current objective. If you find yourself lost, there’s a 3D map available at the touch of a button but it isn’t always entirely clear.

So, the single player makes a more than satisfactory transition to the Switch but how does multiplayer fare?

Well, there’s the expected variety of online game modes from Deathmatch and Team Deathmatch to Domination and Freeze Tag while you can also set up private lobbies to invite up to 5 friends to join you in your desired game mode.

It certainly works, and there is pleasure to be had from nailing a last second kill to sneak victory in a Deathmatch, but it never feels quite as compelling as playing through the main campaign.

In addition to the standard campaign and online multiplayer, which can also be played with bots, you have an Arcade Mode available that allows you to tackle levels from the main game with the aim of getting the best score possible by killing enemies efficiently and in style. A score multiplier will increase as you do damage but, as you might expect, decrease for any damage received. Arcade Mode is a fun diversion and gives incentive to play through levels more than once after you’ve beaten the campaign. 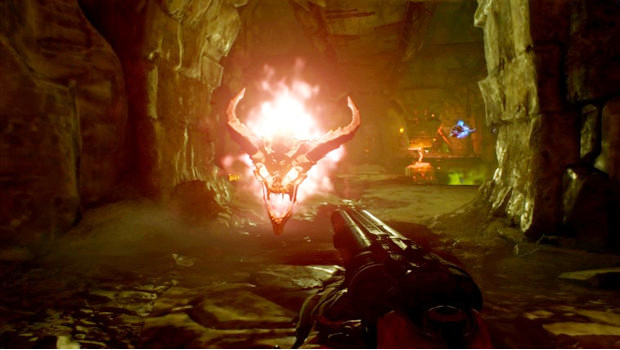 Who needs a flashlight when you've got flaming skulls frequently lighting the area?

All in all, Doom makes a commendable transition to the Switch and one that we hope paves the way for further third-party support in the future. The game isn’t without niggles, however.

I hinted at blurry visuals earlier in the review but sometimes it’s as if you’re trying to view the action through a screen covered in Vaseline! On more than one occasion I felt my eyes struggling to make things out as clearly as I would have liked, be it the enemies, environments or text on screen, as the blur would make everything seem out of focus. Trying to deal with this while moving and turning at pace made me feel a little queasy more regularly than I felt entirely comfortable with but thankfully the Sleep Mode of the Switch provides the perfect opportunity to take a step away and resume the game later.

There are also audio problems in DOOM that can’t be ignored. While the music really adds to the drama and intensity of battles with the demons, there are times when there are strange noises that occur out of nowhere and other instances where it’s as if the volume is being turned down while you play (I assure you, it was not!) but these problems seem to rectify themselves between loading screens.

Despite these criticisms and a story that most players will probably care very little about, DOOM on Switch is an excellent addition to the ever-increasing library of the console and is a game that provides something a little different to what is already available.

Panic Button has done an impressive job of porting DOOM from more powerful hardware to the Switch making the necessary compromises to create an enjoyable, and worthy, addition to the console that truly feels like DOOM whether in docked mode with the Pro Controller or undocked with the Joy-Con.

Despite a considerable drop in the graphical quality and frame rate, DOOM on Switch feels like the fast, smooth and brutal gore fest that it was always intended to be.