My childhood in the late-80s was spent doing two things – trying to find Double Dragon machines in the arcades, and trying to find good home conversions.  The latter of which provided a certain amount of frustration.  A fussy child, I would notice every missing frame of animation, any difference in colour palette and every time Abobo failed to smash through the wall.

It mattered to me, you see.  Double Dragon was an absolute sensation, and no home conversion was quite right.  Not that they had much chance - the 1987 coin-op was, in layman’s terms, an 8-bit game with 16-bit graphics.  No wonder consoles couldn’t keep up.  Arguably, 1992’s Mega Drive version was the first really great port, and even that couldn’t match the colours or sound.

One popular version, however, was the NES port. Perhaps because of the success of Nintendo’s console, this was the Double Dragon that many knew and loved. Of course, it had no chance of matching the coin-op, but it still struck a chord with many gamers. Such was its popularity that the NES received facsimiles of all three arcade hits. 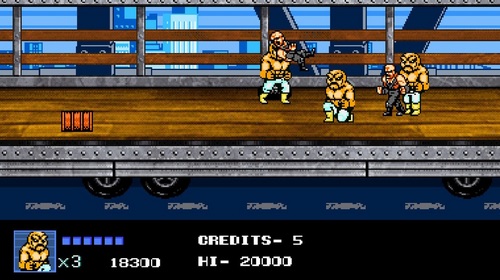 At the very least, it does resemble a Double Dragon game... from an alternate universe.

I’m mentioning this because Double Dragon IV should really be considered a fourth NES game, rather than the fourth entry in the series in general.  When in 2015 Arc System Works acquired the rights to all Technos’ intellectual properties, Double Dragon fans must have been hopeful.  Oh, the possibilities.  Would any new title feature those brilliant sprites from the 1987 coin-op we loved so much? Or perhaps hand-drawn 2D that kept the same spirit? That it was neither is undoubtedly a disappointment.

But enough about what it isn’t, let’s focus on what it is... Double Dragon IV (which surprisingly takes up 1GB on your Switch) feels like having a new 8-bit game. Not retro-modern like so many, but actually something from the late-80s or early-90s, admittedly with smoother graphics and more enemy sprites than Nintendo’s machine could handle.  Specifically, it’s based on the NES port of Double Dragon II. 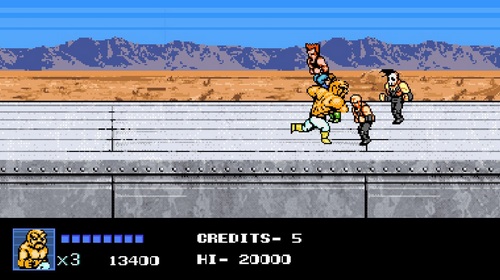 Now, don't go getting carried away there...

There is the option to set either normal or retro music, the ability to assign your preferred button configuration and the choice between Story Mode or a 2P Duel, but that’s about it.  In single player mode, you can choose between the appearance of Billy or Jimmy, and then off you go.

Double Dragon IV begins with the two brothers being rammed off the road. It turns out their defeat of the Black Warriors has only paved the way for another crime gang, the Renegades, such is the way these things happen.  The story is told via static screens with text – again, very much in the style of the NES.  It’s nowhere near as immediate, dramatic or atmospheric as the coin-ops and does pretty much boil down to defeating one boss after another only to be told “Aha!  You won’t beat the person who’s really behind it!”  That said, the ending is surprisingly charming and moralistic. Now that really is retro. 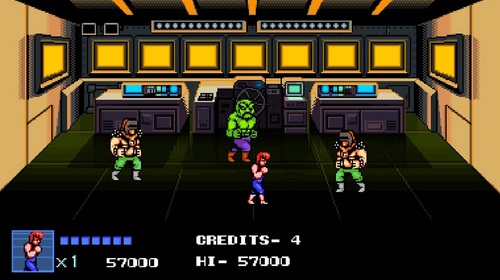 Beat up a range of different thugs ranging from welders to Hulk-a-likes!

Billy and Jimmy have a variety of attacks at their disposal, none of which will be unfamiliar to veteran fans. This time, however, it’s rather too well-balanced – there are lots of moves, but none of them are particularly effective. The beauty of the original coin-op was that it was a procession of tough fights that could be survived by using a couple of notoriously overpowered techniques.

Bad guys were fewer in number than later brawlers and it gave the experience a slower, more deliberate feel. Double Dragon IV piles on more enemies at once – a design choice that works in Final Fight or Streets of Rage 2, but unfortunately this is neither.  At times, it feels like you are fighting hordes without the type of gameplay in place to handle that.  Whilst you can technically throw an opponent into a group of enemies behind you, it’s not as easy or effective as in the best examples of the genre. 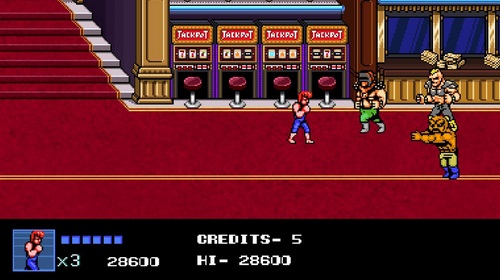 All games of this genre have to feature arcade or slot machines, it's almost a requirement.

It is commendable, though, that Arc System Works haven’t just copied the Final Fight model, which frankly was the key to most good beat-‘em-ups that followed. Whereas most brawlers present you with tank-like guardians possessing a range of cheap moves, Double Dragon IV’s bosses – including Burnov, Jake and sumo wrestler Kodani– are really just slightly more powerful than ordinary henchmen.  It’s distinctly Double Dragon, and all the better for it.

Also back is the pseudo platforming from the NES games.  Every now and again you’ll enter a room with platforms, spikes and cogs you have to traverse with the best floaty jumps you can muster. Whilst most of Double Dragon IV is simply average, these sections were just a plain bad idea. Opponents will often completely block your way on an upcoming platform, or sometimes just jump into the lava themselves.  It really does feel like something from the past.

In its favour, Double Dragon IV is not necessarily something that’s over in five minutes. We’re so used to downloading our favourite coin-ops and forcing our way through them with infinite credits, we can lose sight of the way a challenge was initially designed. Not so with DD4, at least if you use the purist’s method. 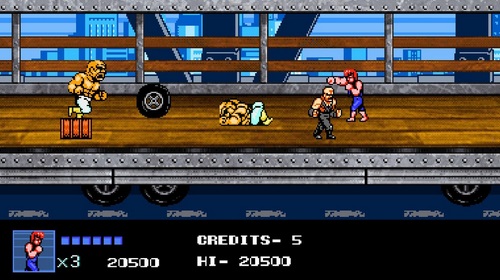 There is a certain charm about the way this game gives you a limited number of continues, and not even any difficulty settings.  Double Dragon IV has this curious feel of not seeming too frustrating, but is something you simply need to get better at. Actually, it’s probably a bit too tough. Getting through all 12 levels in one go requires more endurance than some will be able to muster, so thankfully there is a (hidden) level select to ease the proceedings.

Completing the game unlocks Tower Mode, where you will find some classic, otherwise-unused NES sprites, as well as the ability to compete Story Mode with various enemy characters. If controlling Abobo doesn’t put a smile on a Double Dragon fan’s face, I don’t know what will. In fact, playing these modes with a stronger or faster character is considerably more fun than the main game using Billy and Jimmy, which does make me question the fine-tuning of the core experience. 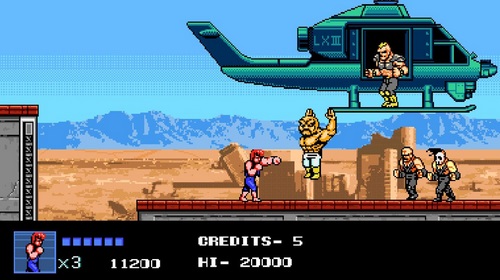 Double Dragon IV could have shown the whippersnappers how a beat-‘em-up is done, but instead baseball bats itself in the foot with self-imposed limitations.  To its credit, it provides some amusement for dedicated fans, feels authentically Double Dragon (albeit only the NES version) and resists the urge to wholly copy more modern brawlers.  Ultimately, however, long-time fans will wish it was even more true to the real source material, whereas those unfamiliar with the series may be left scratching their heads as to what all the fuss is about.

The greatest fighting heroes of all time return for a retro-tastic adventure. Whilst there is fun to be had with a like-minded friend, Double Dragon IV is mostly a missed opportunity. Remaining so true to the NES massively holds it back from the greatness it could have achieved, and whilst it’s not a bad game – just average - it never comes close to living up to the legacy of the original.

Double Dragon IV feels like having a new 8-bit game. Not retro-modern like so many, but actually something from the late-80s or early-90s...