A puzzle game similar Tetris should need no introduction, yet it wasn't as successful as the puzzling grandfather, so it's going to get one. Dr Mario began his internship on the NES where the quirky med student would throw Megavitamins into a giant pill bottle with the actual aim being to assemble the pills in a "four or more" manner that would destroy the multicoloured germs within.

Red, blue and yellow, germs of all shapes and sizes, they all fell victim to the pill-pushing tactics of the Doc and as he graduated through the SNES and into the lesser known N64 era he became more widely known, even getting his own story mode and marathon mode before tailing off into obscurity never to be seen or heard of again.

That is until this very day as Dr. Mario is now back thanks to the introduction of WiiWare in the form of Dr. Mario & Germ Buster. Indeed it has been a while since his last outing, but this latest incarnation is one of his finest hours yet. For the most part very little has changed, the classic formula remains with you, the intern, positioning pills (thrown by Dr. Mario) of the same colour next to germs in a line of four or more in order to neutralise them.

Difficulty is controlled by selecting a gradient on the bar which is easier at one end and harder at the other providing an experience that caters for all abilities, speed is selectable, classic tracks "Fever" and "Chill" are selectable for your listening pleasure and are just as catchy as they always were with the seemingly new additions "Sneeze" and "Cough" giving the originals a run for their money. 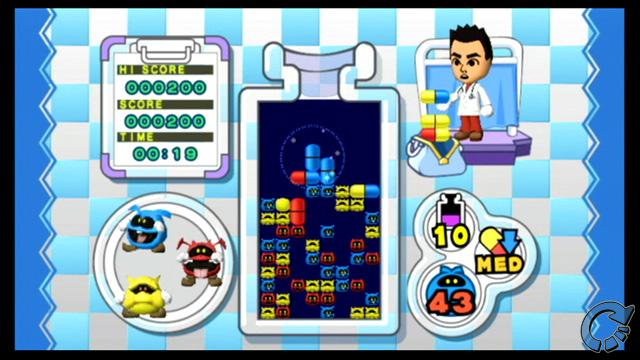 Now the drugs don't work, they just make you worse...

So everything is just as it was for the original mode with the formula remaining unchanged and still maintaining it's challenge, the other two variants include a vs CPU mode in which your pitted against a random Mii with your own Mii acting as your avatar, and another mode in which you attempt to clear out the germs as quickly as possible.

Now all of the above is well and good but like most puzzle games these days it needed something more and that has come in the form of Nintendo Wi-Fi Connection support. You are able to play against friends or randomly with people around the world in both classic and flash mode with both offering as much fun as they do in single player, if not more so; random matches are often fun but you may find yourself completely obliterating someone in one round and then getting schooled for the next three by some battle hardened player, this is because there isn't any matchmaking as such, it may have been better with but at least without you are guaranteed a challenge at some point.

To really test out the multiplayer though I was fortunate enough to try out the friend options by facing off with none other than N-Europe's very own Franklin; getting started was pretty simple, friend codes were added, matches were hosted and fun was had, it really is that simple. Things started off relatively slow with myself winning a few matches on the standard game, then choosing Flash mode I decided to up the difficulty on my side of the screen and ended up failing miserably until the settings were altered once more; overall though it was a fun experience with both of us winning and losing a good few matches.

Having the ability to customise your own difficulty and speed separate from the other player is useful too and enables a leveling of the playing field. As with most other Nintendo online enabled games there is no such fanciful technology as voice chat, oh no, but instead you are provided with a somewhat limited but at the same time satisfactory pre-set text chat tool which can prove useful when wanting to change settings or just reveling in your victory / graciously accepting defeat. 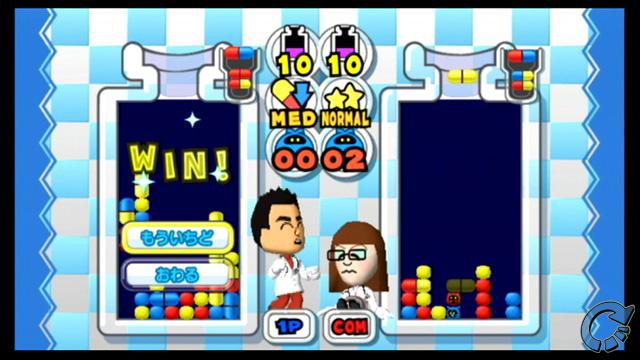 Making up the second part of the package is Germ Buster; this is essentially a motion enhanced version of Dr. Mario where you grab the slowly falling pills with A or B, control the movement with a cursor and rotate with the alternate action button. Overall the controls work fine though takes a few minutes of getting used to but once you've got it sorted it's the same basic formula only a bit slower and you get more pills that drop.

Because of this the game can often end abruptly if you play it alone but if you get some friends to help out (you play co-operatively in Germ Buster) then it becomes a fun distraction from the classic puzzler as well as being an interesting take in itself. You won't play it for as long though, mind you, even if it is fun, but it's good to see that outsider developers Arika (Nintendo farmed out the license) have gone to the effort of including something new.

Otherwise though it's the same Dr. Mario that we know and love, the graphics are solid and functional, the gameplay is still addicting and the music still as infectious as ever. He's spent a long time on leave but it's good to have the Doc back where he belongs and doing better than ever on WiiWare.

For a title that has been away from our screens for far too long, Dr Mario is an excellent revival of a classic puzzle game and a decent WiiWare launch game.