Do you remember those scrolls you made when you were a kid, dipped in tea to make them look old? Well, Earth Atlantis has had the full PG Tips treatment. With numerous shades of brown and thick, black outlines, it is one of the most artistically striking games ever made. To all intents and purposes, It’s an ancient, playable sea chart full of monsters.

And monsters there most certainly are. Set sometime in the 21st century, Earth Atlantis depicts a flooded world. Sea levels have risen, confining our current society to history. Creatures and technology have merged into one, making the oceans a very dangerous place. As captain of the Nautilus, you must investigate a distress signal.

It’s important to understand that Earth Atlantis is a modern arcade game, and as such is not brimming with complexity. Your submarine is manoeuvred with the analogue stick, whilst there are only two buttons used – one to fire all your weapons, and one to turn you either left or right. The aim of the game is to track down all the targets – monstrous, aquatic bosses that test your skills to the limit. Navigation is guided by sonar rather than a true map. 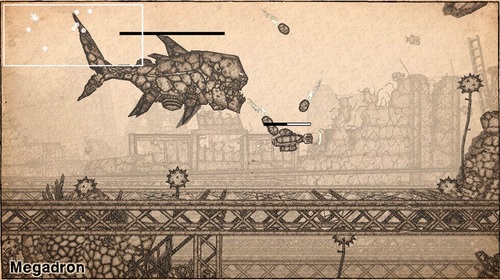 It might look similar but that is definitely NOT a boss from Darius.

Your primary weapon (essentially a laser beam) can be upgraded by defeating normal enemies, whereas secondary weapons can be found in crates and barrels. These cannot stack and so you must settle for one over the other. If you’re confident in your aim, you might choose the standard Missile/torpedo, whereas those who want to focus on evasion may prefer the Homing Missile. If you can get close to your enemies, the Electric Beam may be best, whilst if a boss mainly sticks to the floor you might choose the Bouncing Bomb. Picking the right tool for the job is key.

It’s something of a shame you can’t keep and permanently upgrade all of these, as you certainly have your work cut out for you. Gargantuan bosses appear in succession across the ocean, and defeating them sometimes causes a section of stone to crumble, unlocking a newer, more dangerous section of the map. There is also some variety supplied by an unlockable range of alternative submarines. Not only do these have differing stats, they also vary in the angle and direction of their main weapons, thus providing a real choice in preparing for battle. 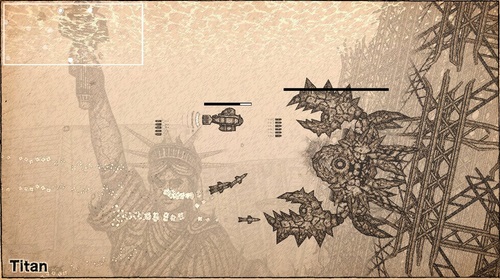 Giant enemy cra... OK that joke may have finally run its course by now.

One huge drawback is that if you get a Game Over, you lose all your progress apart from which bosses you have defeated and (in the latest version) the minimum version of your last sub-weapon. It’s not hard to rebuild your primary weapon, but there is no guarantee that there’ll be any item crates near your current Starting Point. Switching between a variety of permanent, upgraded sub-weapons could have provided both a more satisfying level of strategy and a better sense of security.

Regardless of the gameplay, it’s hard not to be enthralled with the visuals. The sea creatures are works of art, with even the smaller ones a joy to behold, whilst the backgrounds employ layers of parallax to depict the remains of human civilisation.Â  It’s hard to take your eyes off the Statue of Liberty casting its steely gaze at you or an enormous whale swimming past. There is a slight issue with clarity - perhaps the game could do with a splash of colour, to distinguish passageways or differentiate the player ship and item boxes, but overall it’s top class. Aurally, the main, trance-like ambient tune can outstay its welcome, but the boss music is more up-tempo. 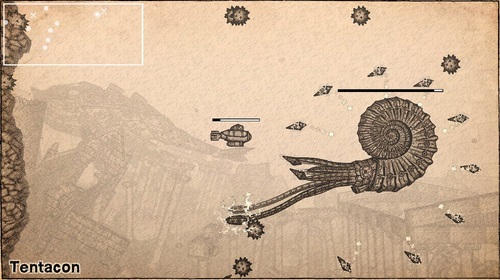 There just aren't enough Nautilus boss battles in videogames, this is a proven fact.

Earth Atlantis won’t be for everyone, mainly because it’s sometimes hard to the point of frustration. Bosses are so big, it’s perilous to get close to them, yet stray too far and you won’t see them signal their attacks. Colliding with them, meanwhile, often results in your submarine being completely destroyed. It’s also perhaps too simple for its own good, so much so that some may find it uninteresting. The game could perhaps have done with some quieter, more mysterious moments. As it is, it possesses neither the full-on adventure of a Metroidvania nor the on-rails excitement of, say, R-Type. On the positive side, it’s visually stunning and there is an appealing purity about its gauntlet of bosses.

One very important thing to stress is that, at release, Earth Atlantis suffered from a huge issue regarding the difficulty - the challenge was unreasonably hard, even on Easy Mode. This was addressed with a patch, which is now available in Europe. Whilst this has made the game much more completable, you may still need to traverse the whole map in order to find your desired power-ups. The big difference, however, is that you now have more chance of succeeding in the battles you are preparing for. 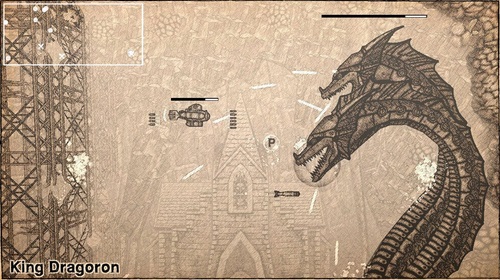 Two-headed serpent... dragon... cerberus-type boss? Check! This game has it all.

This project clearly has some huge talent behind it, including a superb artist and skilled programmers. It arguably needed more thought at the design stage, in order to construct a more compelling adventure and have more consideration towards the various difficulty levels. There is a refreshing simplicity to the central idea, but with almost no story and an extremely unceremonious ending, it sways too barebones for its own good.

Earth Atlantis is a simple and challenging modern arcade game, distinguished by its superb graphics. It’s not for beginners, and won’t scratch the itch of those wanting a more complex adventure, but those with the skills may enjoy the purity of the challenge.

Regardless of the gameplay, it’s hard not to be enthralled with the visuals. The sea creatures are works of art, with even the smaller ones a joy to behold, whilst the backgrounds employ layers of parallax to depict the remains of human civilisation.