Etrian Odyssey V: Beyond the Myth

When the Nintendo DS launched in 2004, gamers found themselves asking a question - would there ever be a great game that truly needed the dual-screen feature of this handheld? Step forward Atlus with Etrian Odyssey. A turn-based, first-person RPG with echoes of Sega’s Shining In The Darkness, Etrian Odyssey asked its players to delve deeper into a mysterious labyrinth, drawing a map on the bottom screen as they did so. It was tough. So tough, in fact, that it gained a reputation as one of the hardest RPGs out there. And yet there was something so compelling, so deliberate about its design, that a considerable number of fans stuck it out to discover the maze’s biggest secrets. In short, it was the real deal.

After two very good DS sequels, an excellent fourth entry on 3DS and a couple of remakes, we find ourselves presented with the fifth and quite possibly final iteration. Etrian Odyssey V aims to wrap up the story, whilst bringing together all the best elements of the series so far. Like its predecessors, it begins in a hub town next to one of the saga’s signature Yggdrasil trees. The establishments are full of friendly locals who’ll aid and assist you, just as your own expeditions will develop everyone’s understanding of their world, in the process creating something that genuinely feels like a two-way relationship. But first, you’ll need to form your personal guild.

When building a team, players can select from four races, which each specialise in certain classes. The all-rounder Earthlains fill the type of roles previously occupied by Landsknechts, Gladiators or Protectors. The strong, rabbit-like Therians specialise as a front-row Masurao (Samurai) or a back-row Rover (Survivalist). Magic-using Celestrians can be elemental Warlocks or the Hexer-like Necromancer, whereas the gentle Brouni heal or buff as either a Herbalist or Shaman.

Things have been very much mixed up compared to previous entries, with greater emphasis on balance. Most of the job classes can perform at least one bind or status effect, and as such it feels like you could go through the whole experience with most combinations. Furthermore, any race can eventually be any class – I surmounted the end-game challenges by using a powerhouse team that included four Therian Dragoons. 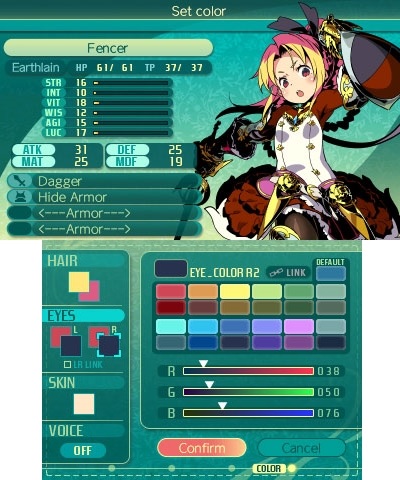 Group-based Union skills are back, and as ever are extremely useful. If you’re in a tight spot, your whole party can come together to enact a multi-bind, impenetrable shield, elemental attack or many other options, meaning you don’t strictly need party members who can do these things individually. Union skills are race-based, and so for the vast majority of the game it pays to have a good mix in your team.

Once you’re set, you can be off adventuring, and the gameplay has now become so refined it’s like putting on a favourite pair of slippers. As before, there is a huge labyrinth to explore, and like the second game, this time we are ascending. The experience is divided into several strata, which each consist of five floors. Via random battles, you’ll encounter minor enemies, who will drop items upon defeat. Taking these items back to town unlocks new equipment to buy, which gradually makes you stronger.

By the time you reach the top of a stratum, you should be able to take on the more powerful FOEs (mini bosses) that you have been thus far avoiding. These will drop even more valuable resources, which allow you to buy superior gear, therefore giving you a better chance of overthrowing the stratum boss you have nearly reached. The best equipment of all, however, is obtained by selling conditional drops – items that have strict requirements for gaining. You might have to defeat a FOE with fire, for instance, or clonk it whilst its legs are bound. And this, in a nutshell, is the hook of Etrian Odyssey – a perfect gameplay loop of battles, drops and new equipment. 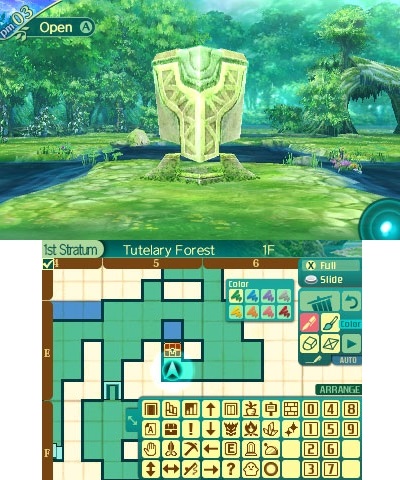 But that’s not to say this chapter is all a re-tread of past glories. It’s now possible to cook food, which enables you to survive for longer in the field. Whilst this is not all that necessary, it doesn’t detract either. Weapon forging has been simplified, with it now only possible to make something stronger in the simplest of ways – no more grinding for a sword with eight ice-attack slots. Buffed-up weapons can be sold or recycled, the latter of which proves extremely useful later on when you want to enhance the ultimate incarnations of each without repeatedly having to obtain the conditional drop from the hardest bosses. Most exciting of all is the addition of Fire Emblem-style Master classes, which sees party members able to choose between advanced versions of their job, and all the unique skills that implies. It may not be original, but it’s a brilliant addition to Etrian Odyssey.

Storytelling is again the best in the business, with enough there for those who want it, but light enough for those who don’t. There are of course various missions, quests and mysterious characters met in the labyrinth. Etrian Odyssey never beats you over the head with its cleverness – there are no heavy tomes full of lore, for instance, and yet there are still plenty of esoteric details and mythological references. Over five entries, the story has now been fully explained, and yet you could easily play the whole lot without being troubled over what it all meant. That Atlus can do this without making players feel either confused or cheated is nothing short of genius. 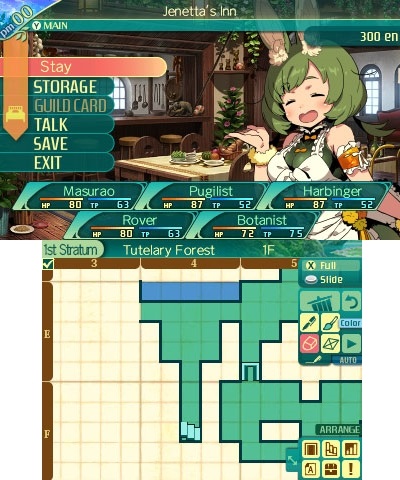 Ever since the series jumped to 3DS, the games have employed a greater use of polygons. Not only did explorable environments receive a much-needed graphical boost, enemies also became fully 3D. This is a mixed blessing. Whereas FOEs were once represented by a 2D circle, these beasts are now recognisable 3D models within the environment, which led to two gameplay innovations. For one thing, you can now see exactly which body parts the enemy attacks with, and take relevant precautions. If it swings its fists at you, bind its arms. Chanting an unpleasant curse? Bind its head. It also meant environments became slightly more puzzle-based. There are baboon-like FOEs, for example, that push stone pillars in your path. Although this sort of mechanism has been toned down in this entry, it’s still something that divides fans.

Whilst this is really a matter of taste, it’s hard to disagree that the series lost some beauty when switching (almost) fully to 3D. Thankfully, though, there is still enough hand-drawn art in the game to remind us of its origins. Town backgrounds are detailed in a Phoenix Wright-esque manner, but it’s the character portraits that really jump out. In keeping with tradition, the type of person who runs each business has the same manner and general appearance as their counterpart from earlier titles. Furthermore, each playable class generally has four portraits to choose from – two male, two female – and as usual they are absolutely gorgeous, with thick, black lines and just the right amount of shading. Using 3D models for the enemies has its advantages, but switching to hand-drawn figures for battles (as in the first three games) would have been like touring an art gallery.

Etrian Odyssey’s music is even more legendary than the character art, perhaps even more so, and the fifth game certainly doesn’t let the series down. Jazz tunes provide the atmosphere in the central town, with electric guitar accompanying the boss fights. The exploration melodies, meanwhile, are once again oddly melancholic. True to the saga since it’s been on 3DS, the voice acting is absolutely outstanding, with a wide variety of personality types brilliantly vocalised. As for the sound effects, they are so good that you might even chuckle as one of 18F’s warp crystals whooshes you to the wrong location for the twentieth time. 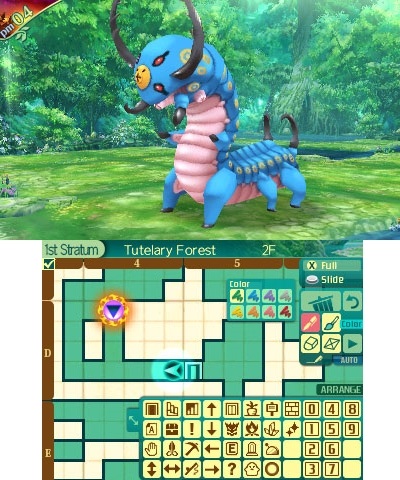 But the visual and aural treats are really just icing on the cake for what is an excellent RPG. The rhythm never falters and the pace never slows over the five strata (with a sixth, hard-as-nails stratum for the brave). Incidentally, the post-game boss is one of the more reasonable in the series, similar in challenge and strategy to II or IV. The level cap for the main story is 70, which, by way of some exquisite design, is exactly what you should hit just as reach the final boss.

Story-wise, Etrian Odyssey V concludes everything quite nicely and could well mark the end of the series, just as the 3DS itself takes its final bow. It’s uncertain whether Nintendo will release another dual-screen handheld. Even if they don’t, I hope EO has a future, as the concept is just too good not to continue. In the meantime, flip open your 3DS and treat yourself to one of the most magical and compelling RPGs of modern times.

But please, take an Ariadne Thread with you.

The epitome of first-person dungeoneering returns for a fifth instalment, with the gameplay refined to perfection. Not only does Etrian Odyssey V comfortably surpass its predecessors, it’s also the best RPG on 3DS.

Most exciting of all is the addition of Fire Emblem-style Master classes, which sees party members able to choose between advanced versions of their job, and all the unique skills that implies. It may not be original, but it’s a brilliant addition to Etrian Odyssey.