If you've been playing games for a few decades, you'll likely remember the arcade classic that is Asteroids; in it you would take control of a spaceship and blast asteroids, aliens or anything else in your way until you either cleared the screen or had your ship destroyed enough times to get a Game Over screen. A simple premise which worked well enough and features gameplay which has held up to this very day despite being dated.

From the outset it looks like Event Horizon has at least taken inspiration from Asteroids for the space combat which makes up a decent portion of the game, or at least that's how it looked to myself from the initial reveal trailer. So i went into this review with a vague expectation that at least that part of the game might rekindle some of that classic Asteroids action but aside from that I didn't really know what to expect being that I knew nothing about this title from the outset.

I was surprised, but not shocked to find that Event Horizon is not even close to what I thought it might be. 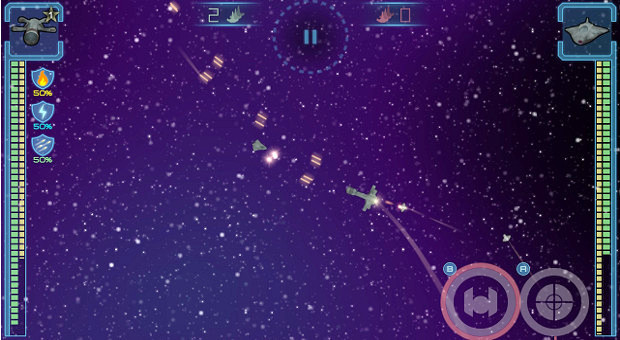 It turns out that this game originated on mobile platforms a few years ago, has been ported to the PC a couple of years ago in early access before releasing generally and is now available on the Switch as well. Now that's not to say that Event Horizon is any less of a valid game because of its mobile origins, on the contrary it seems that many satisfied players have gotten hundreds of hours out of this title due to its addicting nature and numerous customisable options.

Personally I found it impossible to warm to being that the main ship versus ship action controls felt rather imprecise which lead to complete disconnect between myself as a player and the on-screen action which makes this all a bit of a non-starter despite the apparent wealth of content contained further within.

You start off with three ships, Scout, Spectrum and Raven. All of these ships offer slightly different setups, as you progress you can unlock up to fifty different base models of these ships, so there's plenty to play around with. Then you can get into modification options which offers a number of customisable parts including over a hundred guns and modules which will affect how your ships performs in battle. 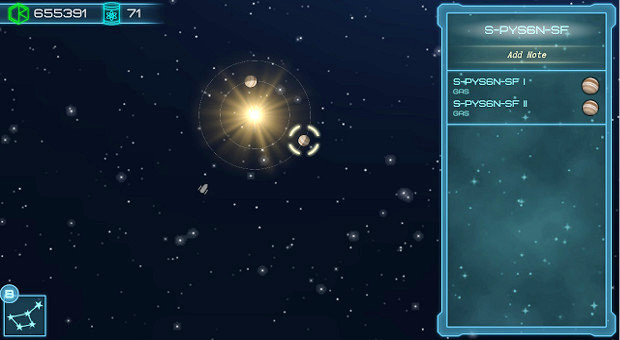 Time to explore another piece of rock...

There are apparently millions of stars to discover plus planets too as the game seems to be being updated regularly on the PC release so hopefully the future updates on the Switch will prove to be reasonably in-sync so that there isn't any downside to picking Nintendo's console as your platform of choice. Ten unique factions are in the game each with powerful flagships, so there's plenty to keep you busy should you decide to invest much time in this title.

To the credit of the developer, there are moments when you're fighting against a powerful ship that it can feel like you're fighting against a boss in an almost shmup-like manner. This isn't all the time but sometimes I can see a glimmer of what can make this an enjoyable experience at times but it's just a shame that I couldn't really get into the action that much at all as the rest of the elements are of limited interest to me personally. 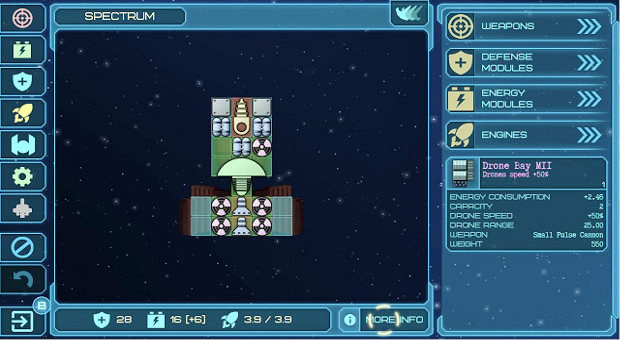 Customise every part of your ship... within the pre-determined dimensions shown on screen.

Another element I don't quite understand is that there seemed to be the ability to battle other players online in the mobile version but this is now absent, also it seems that there were microtransactions present in the mobile version and while I'd say that it's a good thing that they aren't in the Switch version, it doesn't really feel that well balanced and as a result there is plenty of grinding to be done for ship parts.

It looks like the game has had something of a troubled development history but at least there is a playable game underneath all of this, I'm just at a loss when it comes to advising that people pick it up because I really don't see how it's possible to get hundreds of hours of enjoyment out of, but if this is your kind of game then all the more credit to you. There's a really big skill tree if that helps aid your decision. 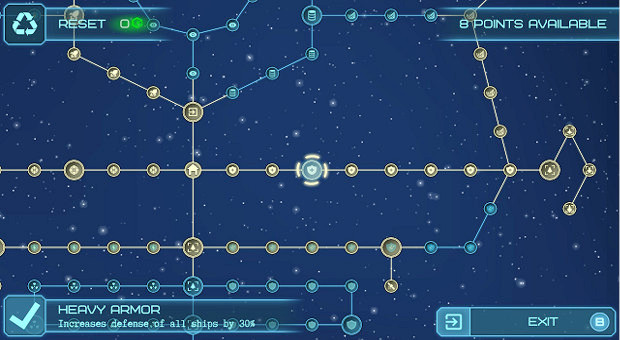 No really... it is one heck of a skill tree, look at all the options and this isn't even zoomed out.

Don't go expecting anything much at all from the visuals, they are best described as functional as you can tell what everything is, it's easy enough to pick our which ship your controlling and what you're shooting at, the backgrounds are definitely space-like and have a certain 90's charm to them. The audio is nothing but noise from the title screen, to the battle music and the sound effects which are just about serviceable; after listening to so much other good space music and blasts from spaceships from playing shmups I just can't understand why anyone would want to listen to this for hours on end.

Add on a couple of points if you really like this type of game if it makes you feel any better but Event Horizon really missed the mark for me. This is why I can only conclude that this is a title which either just isn't for me or it just needed a lot more work before being released. Maybe it can be patched? As it stands, I'd have to say that it would need a few before I'd consider investing any more time in it.

Event Horizon is a somewhat serviceable spaceship-orientated game which can be fun at certain times but the amount of grinding you're expected to do in order to get to the good bits just seems at odds with the enjoyment you could be having playing something else. If you're a fan of this type of "exciting space 2D action/RPG game" then give it a try while it's still on sale for half price because it's hard to advise spending any more on it at this point in space and time.

... though not as engaging as Asteroids
Lack of any real variety despite having options
Progression doesn't feel very rewarding
Aesthetically unappealing