Ah, cross-over games. I often find it refreshing when the cast of game X gets thrown in the universe of game Y. And it sometimes leads to a situation where the whole is greater than the sum of its parts. A recent example is Mario + Rabbids: Kingdom Battle which we awarded with a perfect 10. Now it is time for the tactics of Fire Emblem to cross swords with the musou series Dynasty Warriors. Let’s find out if there is synergy between these series.

To put the review into context. I recently played and reviewed my first musou game: Fate/Extella: The Umbral Star. Fire Emblem I have known for a bit longer, as I played Fire Emblem and Fire Emblem: The Sacred Stars on the Game Boy Advance. Lately I have been enjoying the mobile title Fire Emblem: Heroes as well. So most of the cast in Warriors I actually know from the mobile title.

The game starts with trouble in the new kingdom of Aytolis. After monsters invade their realm, the two siblings (and protagonists in this game) Lianna and Rowan receive the Shield of Flames from their mother. This Shield is the key to sealing away the evil that is coming to their kingdom through portals. A side effect is that also Heroes from other realms are appearing in Aytolis. What follows is a thin-as-a-thread plot which tries to tie together the fact that Heroes from various eras and regions from the Fire Emblem universe appear and join forces. Even arch enemies now seem to be the best of friends. It is difficult to create a good story with a mixed cast like this, but there could have been put some more thought in it. 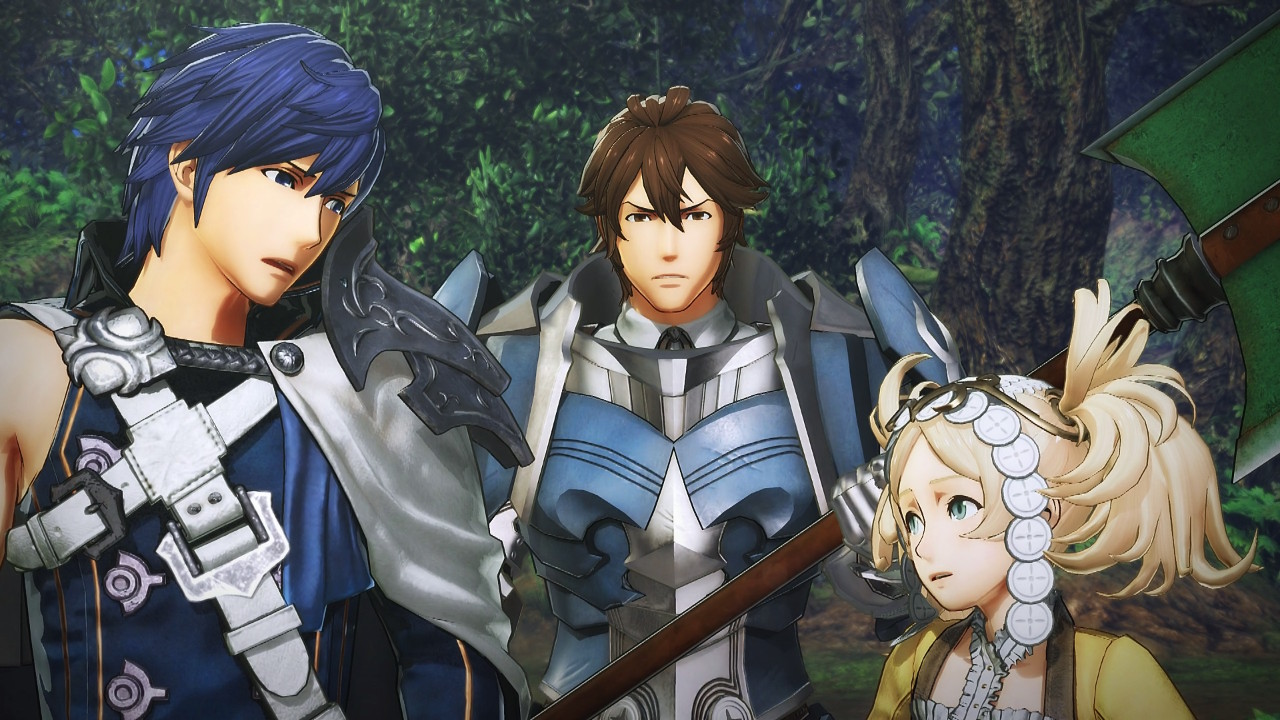 I will not go into further details, but the fact is that soon you expand your crew with characters such as Chrom, Lissa, Robin and Camilla. I will not discuss the full cast here, but it is heavily focussed on the latest Fire Emblem games: Awakening and Fates. I was missing some of my old heroes I know from the first Game Boy Advance games, or from the Super Smash Bros. series. A bit more of legacy in the cast would have been very welcome.

But as said this is not your typical Fire Emblem game, as the main focus is spicing up a Dynasty Warriors game with the Fire Emblem cast. Luckily, this game does much more than only this. It quite deeply implements elements from the tactical Fire Emblem into the gameplay. The game still is a Dynasty Warriors/musou game and plays as such. You are attacking endless hordes of enemies while trying to conquer forts on the map and completing (sub)quests. Attacking is done by chaining combos of weak (Y) and strong (X) attacks. You can dodge, guard and unleash a powerful strike with A. This way you hack and slash your way across the map until finally the main quest is finished, which usually means you have to take out a stronger boss.

Enter the Fire Emblem elements. For starters, the famous weapon triangle plays a role, and other effectiveness as well. You better keep your pegasus knights away from archers or they will go down fast. In most maps you will not be controlling one, but up to four characters. This means that at the beginning of a map, you can choose who you want to deploy. During battle you can switch with the press of a button and cycle through your playable characters. You can even give them orders when not playing by pausing the game, and directing them on a minimap in real Fire Emblem fashion. Even non-playable characters can be issued orders. 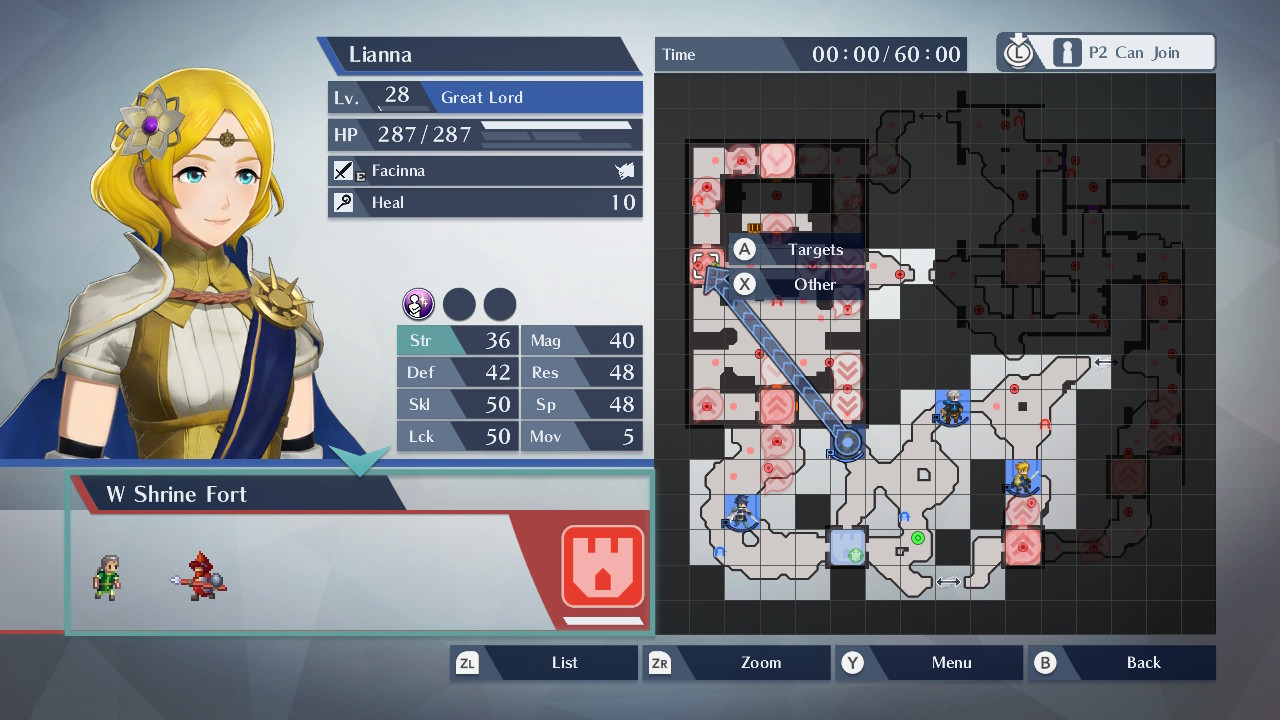 You can also choose to team up with another character. Not only does this strengthen your bond which unlocks perks (as in the FE games), but it also lets you combine your Warrior attacks, and you will gain extra defence. This is also very useful if you need to get a character across fast. Simply team up with a wyvern and you will be flying across the map in no-time.

Your characters level up during the fights, triggering the famous Fire Emblem tune and displaying your increased stats (you can toggle this off to keep the speed in the game). You can use items like vulneraries or healing staffs. With the right materials you can increase the class of your character. There is even an option to play Classic. This means that when your character falls in battle, he is out for good (well, you can revive him/her but it will cost you dearly). In normal mode they just rejoin in the next chapter.

Although the cast is quite extensive, the difference in play style is not that great. First of all there are a lot of sword fighters. Further you will find axe-wielders, lancers, mages and archers. They can be riding a horse, wyvern or pegasus. These mounted units play different due to their mobile nature. But a good example is Frederick; a heavy knight who rides on a horse so is still quite mobile. I would have preferred him on the ground as a tanky, slow but heavy hitting guy. Now the variation in playstyles just isn’t as big as I would have hoped or expected.

When battling your way through the hordes you will see that the game runs smooth. Unleashing your ultimate attacks is a treat for the eye. In handheld mode the game runs at 30FPS and 720P and there are not many framedrops to be found. In docked mode you even get the option to run at either 60FPS at 720P or 30FPS at 1080P. I preferred the 60FPS mode as the action just seems so much more fluid, and I hardly notice the decrease in resolution. It is great that the game lets you choose though. 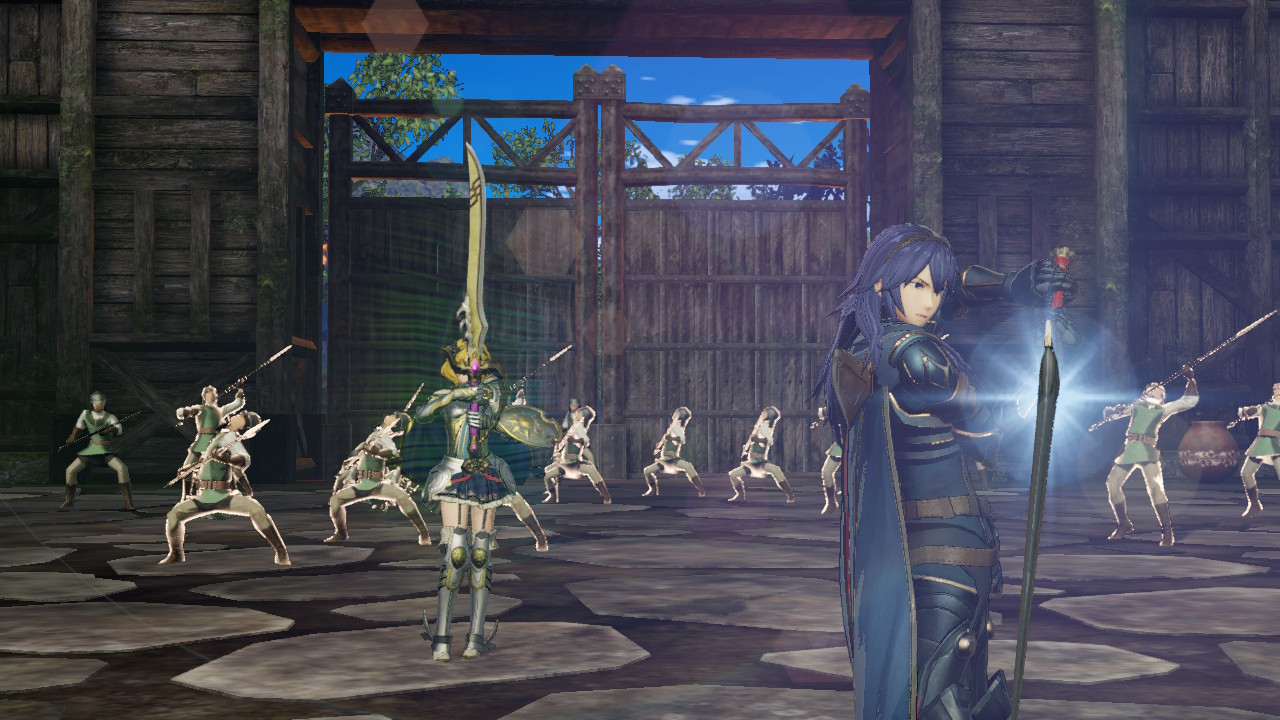 The game is chock-full of cutscenes and voice acting. The cutscenes look good and the voice acting is aplenty. Most voice acting is good, and fans can be happy as Japanese voices will be included as well. The dialogue is fast and not as long as in the main Fire Emblem games which is good, since it would take the speed out of this game. There are funny references, and overall it is well-written. The only catch is that everybody is so happy and friendly with each other, which is strange since with such a cast you would think people would have different ideas and perspectives. Now everyone just blindly follows the siblings. The audio soundtrack is nothing special, with some recognizable Fire Emblem tunes in it.

Fire Emblem: Warriors is a game you can sink a lot of time in. Each mission has various sub-quests, and the merchant Anna also appears if you trigger a certain action in every mission. Visiting her shop gives you a piece of a puzzle, needed to unlock chapters in the History Mode.

This History Mode lets you play classical Fire Emblem battles in a slightly mixed-up way. It is less story driven, but you can sink quite some hours in this mode as well, especially if you want to S-rank them all. For the rest upgrading all your characters, strengthening their bonds to the max and unlocking all extras will keep you busy for quite a while. Add to that there are 3 (paid) DLC packs coming and you can imagine the time this can cost you. 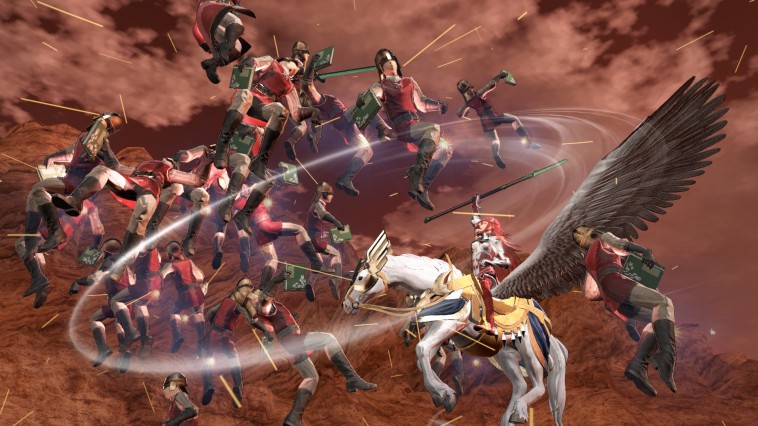 Musou games are not for everyone, but Fire Emblem: Warriors does its best to give the repetitive gameplay enough variation and tactics. The implementation of Fire Emblem elements works surprisingly well. It is a game you can easily sink a couple dozen of hours in. The gameplay is smooth, and it is visually attractive. The choice of characters and the variation in playstyle is a missed chance, and the story is just negligible. But if you enjoy over-the-top action, hacking and slashing and like to see the Fire Emblem cast in a different setting, this is a game not to miss.

Musou games are not for everyone, but Fire Emblem: Warriors does its best to give the repetitive gameplay enough variation and tactics. The implementation of Fire Emblem elements works surprisingly well. It is a game you can easily sink a couple dozen of hours in. The gameplay is smooth, and it is visually attractive. The choice of characters and the variation in playstyle is a missed chance, and the story is just negligible. But if you enjoy over-the-top action, hacking and slashing and like to see the Fire Emblem cast in a different setting, this is a game not to miss.