Since Bowser first confronted you at the end of World 8 in Super Mario Bros on the NES, the boss fights in computer games have often been a pinnacle of tension and hard work for gamers, and a chance for the developers to flex their creative muscles and potentially create something to surprise, delight and, often times, infuriate players.

French Indie developers The Game Bakers, creators of Wii U eShop title Squids Odyssey, have taken the premise of boss battles and really run with it; indeed Furi is one boss battle after another interspersed with a walk (literally) in between each to flesh out the story and provide a build up to your next foe. What might sound simplistic and, honestly, a bit bizzare on paper genuinely works a treat to bring a distinct and fairly unique title to the eShop that is worth investing your time in. 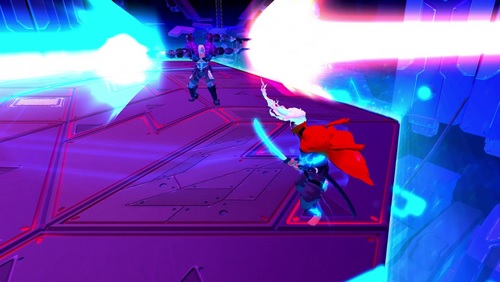 Furi, originally released on PS4 and Xbox One in 2016, is a game that very much wears it's influences on its sleeve. The official press release sites No More Heroes and Metal Gear Solid as direct influences, throw in a dash of film Donnie Darko and a musical score with Metroid and Perfect Dark hints and you'll have an idea of where this game is coming from. You wake up chained in a futuristic prison, confronted by your two faced jailer, and with only a person/thing wearing a rabbit mask (think Ravio from A Link Between Worlds but slightly fluffier) to encourage you to break free and conquer each warrior you come across.

Indeed this rabbit character provides the thrust of the story; it (I'm going with it) follows you in between battles to help fill in, or at least hint towards, what is going on in this nightmare scenario. It's an interesting premise and thanks to some great voice acting by David Gasman as, quite literally, The Voice, it always remains engaging and notable and helps drive the story and emotions the player feels along the way. 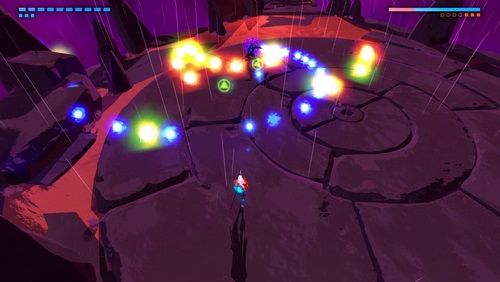 Musically as well the score is a dream; admittedly I'm not much of a music buff so when I see names like Carpenter Brut, Waveshaper and The Toxic Avenger I can be a little non plussed, yet playing through the game encouraged me to check out more of their work and listen to the Furi soundtrack itself on multiple occasions. It's that good and strikes the perfect tone to each story section and, crucially, battle.

Ah yes, the actual game play itself. Something I am really enjoying at the moment with the influx of indie games on the Switch is that many of the developers choose to go with the "the more you put in to the game, the more you'll get out of it" approach, and Furi is no exception. If you want to race through the games easy mode (called Promenade) then why not, you'll get the crux of the story, fight the bosses and make your way through it in double quick time. And don't get me wrong, even from your first battle Furi is a tough game. And yet, the more you persevere, the more time you spend learning each bosses patterns, the more time you spend learning your own move set you become very in tune to every necessary parry, every dodge, every shot, every swipe, it becomes almost like a dance in the way it unfolds. Perhaps I'm getting a bit over excited, but I genuinely enjoyed my initial 15 hours or so with Furi and the sense of accomplishment I got out of finally 'getting' each battle was as good as any I've had in gaming for awhile. Add to that unlocking a harder mode to play with once you complete the game on 'normal', and there is a real sense of replay value and value for money. 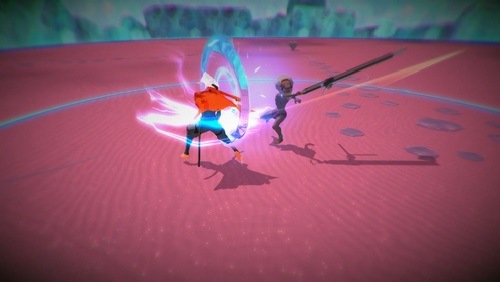 The game isn't without its niggles, however. Most notably for me the shooting controls, advertised as dual stick shooting, felt slightly dated and stiff when mid fight, and not fluid enough for a fast paced fight based game. And, although this might sound strange, objectively speaking I can see why the game might not be for some; if you were being super critical it is rinse and repeat of walking, battle, walking, battle which personally I had no problem with and in fact actively enjoyed, yet if you go into the game expecting a myriad of different game types rolled into one, you may come away disappointed.

Overall Furi, despite being two years old already, is a game I would happily recommend as a new entry to Nintendo's Switch eShop. In turn fast paced, frentic, slow and steady, developers The Game Bakers have crafted a game that is proud of it's influences and builds on them rather than simply copies them. It definitely won't be to everyone's tastes, but then Carpenter Brut weren't on my Spotify playlist before I played Furi, so you could do worse than pick up another must have Switch eshop title.

The Game Bakers have slow cooked Furi for the last two years, and this port from the PS4 and Xbox One has come out of the oven at just the right time. The Switch has yet another great indie title to add to its eShop.

Might be too hard for some
Slightly outdated shooting mechanics
Style of game may put off some.

What might sound simplistic and, honestly, a bit bizzare on paper genuinely works a treat to bring a distinct and fairly unique title to the eShop