I'm not a cat person. Heck, I'm not a fan of pets in general. I've never seen the point of them. So when a developer tries to sell their game by shoving an animal in it in order to create some kind of cute factor, it has very little effect on me. I'm also not a huge fan of the Metroidvania genre. Saying that, I have started to like more and more of these types of games as the years have gone by but I do find that it is a genre that has become very over saturated in the indie market. On paper then I really shouldn't like this game at all. Is that the case? Lets find out!

The game starts off with a space pilot named Gary. He is talking to his superior officer via a video call about a nearby planet he is going to investigate. Before the conversation is over, his pet cat (Kiki) steps on the control panel and the ship ends up crash landing. This proves that no good can come by having a pet cat! With the ship crashed, Gary is pinned inside of it and it's up to Kiki to carry out his mission. He informs Kiki that there should be some kind of mech suit nearby and that he will guide her where to go using a communicator that's inside her collar.

Like a lot of these games, you start off with very little. You are just a small cat that's all alone on a hostile planet and with no way to attack. All you can do at the start is run and jump. The jump move is pretty neat though. If you were to jump near a wall then Kiki will start to scramble up it. Continuing to press the jump button will keep up the momentum and allow Kiki to climb the highest ledges. It's very reminiscent of the wall running mechanic seen in Super Mario 3D World on the Wii U and it's still just as fun to use here. 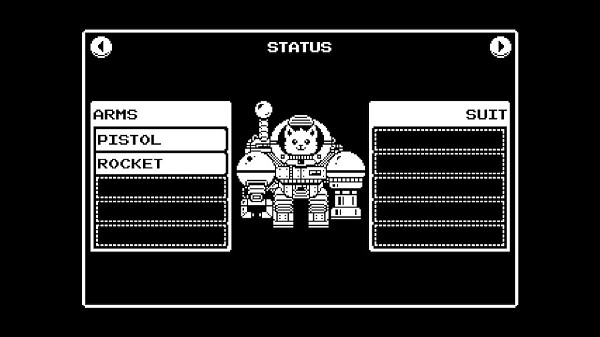 Find all of the hidden items to unleash the potential of the mechsuit... saying that, Kiki looks pretty happy with it the way it is.

Not long after you have crashed on the planet you soon comes across the mechanical suit that Gary mentioned to you. This acts very much like the Power Suit in the Metroid games. You can now fire projectiles at enemies, jump higher and take a lot more damage. However, it does have limitations. For example, you can't swim while in the suit. If you were to try and enter water while inside the suit you would take damage. To get around this you have to hop out of the suit and play as Kiki on her own. The feature of jumping in and out of the suit adds another layer to the adventure. Swapping between the two modes makes for some interesting puzzles and you'll find you will be doing this quite a bit while you are searching various areas. This has it's own draw backs though because you can no longer take damage. In fact, a single hit will kill Kiki and you will be sent back to your last save point.

Speaking of save points, These are made to look like the old floppy disc format. I'll admit the game did get a smile out of me when I seen this and those who are old enough to remember the format will no doubt get a rush of nostalgia upon seeing them. It certainly had me thinking back to my youth and playing on my Amiga 600. Happy days! 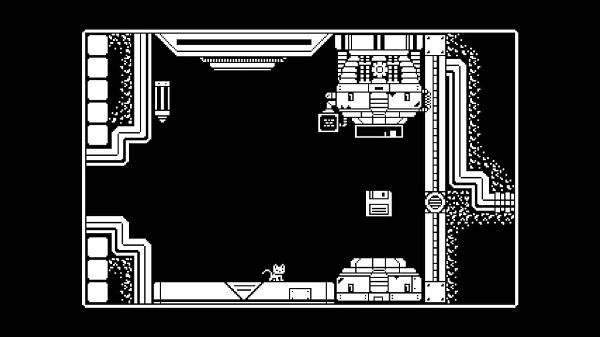 Who else is an old git and remembers using these for home gaming?

Anyway, early on you will get the missile weapon power up. This will allow your suit to fire out powerful missiles (obviously) that can help break through various bits of scenery, which will in turn usually lead to hidden paths or upgrade items. If you've played a Metroid game before then you know how powerful such a weapon can be but also that you need to manage the rate at which you fire them, especially early one when you missiles are in short supply. This isn't really the case here. There is a meter at the left hand side of the screen that rises every time you fire a missile. Shoot too fast and your gun will overheat, meaning you will have to wait a while for it to cooldown before you can use it again. It's not a huge issue and later on in the game you can get an upgrade that allows you to fire more before the gun overheats. If you carefully manage the rate of fire then you can use this gun instead of your main blaster. I found that's what I was doing a lot of the time .

Once the mech suit and missile power up have been unlocked, the main game really starts to take shape and you get a good idea of what your mission is and where you will be heading. The main hub area has a huge elevator that needs unlocking. To do this you must travel to 3 different areas within the game world and complete 3 different tasks. You must empty the aqueducts, unclog the ventilation system and cool the heater core. Only when these tasks are complete will you be able to access the final part of the game. It sounds like a quite simple thing to do but each of the 3 areas are quite large and will require you to navigate various terrains and enemies and power up your suit in order to progress further. 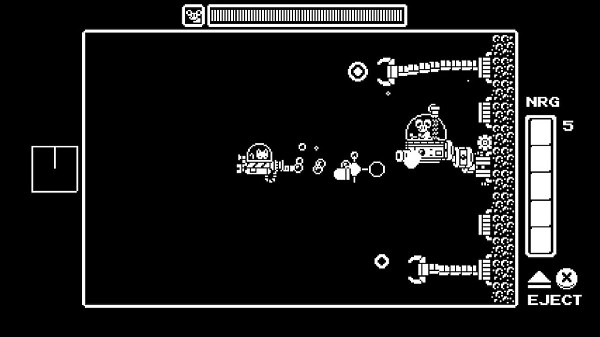 There are a number of power ups and collectibles to find. There are 10 health upgrades and 14 cartridge hidden throughout the game. The health pick ups do what they normally do - increase your health, but the cartridges have two functions. The first of which is to change the colour of the filter that the game is being played in. While it's a nice little feature it's one I didn't really bother using much. The second thing the cartridges do is help power up some of your weapons. You can trade the cartridges in to a NPC and it will give you upgrades depending on how many you have found. Like the health upgrades, these are completely optional but are definitely worth looking for and they come in really useful during boss fights. Other items, such as the double jump and phasing technique are needed to progress through the game and as such you'll end up picking them up during the natural course of play.

As you can see by the screenshots, the game doesn't really go for visual flair. Instead, Doinksoft have went for a minimalist approach and everything is in black and white. It works well with the game and with it not being a graphically intensive bit of software, it does mean that everything runs buttery smooth. However, as I mentioned earlier, if you do want to liven up the picture a bit then you can give it a splash of colour using any of the cartridges that you may have found. 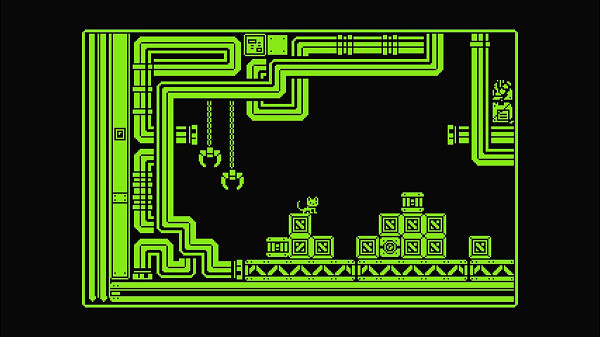 I do have one niggle with the game though. The first is that the regular enemies in the game don't really offer anything of value. In most games like these the enemies will drop health and ammo pickups but this isn't the case with this game. Health can only be replenished when the game saves and ammo isn't needed because you have an infinite supply of it. Once you realise this it means that there is no real need to actually engage with the enemy. Just running and jumping over them becomes a much more viable strategy for a lot of encounters. The game does sometimes force the encounters on you though. There are times where you will be trapped in a room Devil May Cry style and it will not open until the enemies have been eliminated. It's not a huge negative but I thought it was worth pointing out.

There are already a bundle of these types of games on the Switch and a lot of them are highly rated. Things like Hollow Knight, The Messenger and Monster Boy and the Cursed Kingdom, Steam World Dig 2 are games that share the Metroid DNA, so why should you snap this up? For starters, the game is, at least at the time of writing, priced at just over £6. A cheap price for a new release. The game is also pretty short. I managed to clock it 100% in just over 3 hours. Yes, some may point this as a negative, but there are people out there who don't have the time to sink 30 hours into a game and would instead enjoy a more focused, shorter and tighter experience. The game certainly offers that.

Has this game made me a fan of cats? Not at all. But it has made me once again think about how much I do enjoy these types of games when it isn't Nintendo making them. Things like the Shantae series, Monster Boy and the Cursed Kingdom, Guacamelee and now this are all indie games that take this genre and make it more appealing to me than most (not all) of the Metroid games. If you are looking for a Metroidvania type game and would like to actually see the end of it, then this game is certainly for you. Will it challenge you? Not really but it will offer a fun experience to those who are willing to give it a try. This is another indie game that Devolver Digital thought was good enough for them to have under their label and publish and it was a wise choice to do so.

The feature of jumping in and out of the suit adds another layer to the adventure. Swapping between the two modes makes for some interesting puzzles and you'll find you will be doing this quite a bit while you are searching various areas.