In the Wii's still relatively short life, it has become clear that there is nothing the little white box can't do. One of its many attributes is its ability to provide a near-perfect home arcade experience. With Neo-Geo arcade classics gracing the Virtual Console and lightgun games at retail such as Resident Evil: Umbrella Chronicles, it's obvious that the Wii is the new platform of choice for arcade nuts.

And Ghost Squad is the latest addition to the Wii's bustling assortment of arcade games. Originally released by Sega in 2004, the Wii edition is almost a direct port of the popular lightgun game – however, this is by no means a bad thing. The arcade version of the title was a massively fun affair, especially in co-op. But how has its conversion to the Wii affected the game, is it for better or worse?

The storyline is tremendously simple. You are a member of the Ghost Squad, an elite squadron of highly trained soldiers who embark on missions to neutralize terrorist threats by blasting the bejesus out of the poorly dressed goons who dare to stand between you and their equally over-the-top master. Yes, Ghost Squad is as complex as the Hokey Cokey on a loop. But what it lacks in plot, it makes up for in pure, mindless, gun-slinging entertainment. 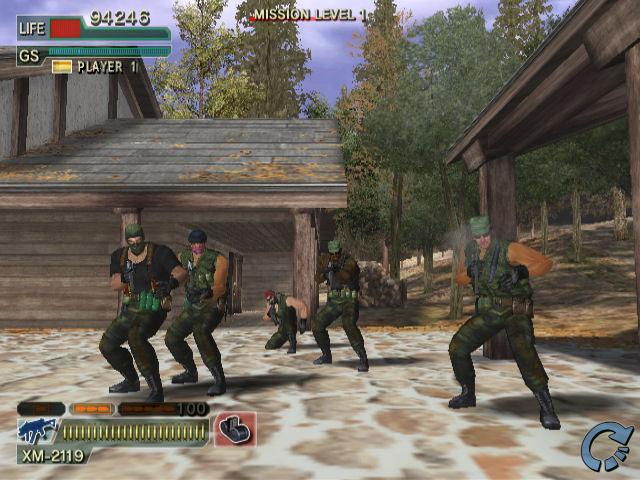 Surprisingly, Ghost Squad is one of the few (or most likely the only) game that works better with the firm, lightgun-style grip of the Wii Zapper. Not only does Nintendo's over-hyped peripheral help to immerse gamers and recreate the arcade feeling of the game, but it also provides an unrivalled level of accuracy. This is especially helpful in sniping missions, and in taking out the psychopathic pop star reject at the end of mission two. We heartily recommend that you have a Zapper on hand if you plan on buying Ghost Squad – the sturdiness of the previously uncomfortably annoying shell will help you get the most out of the game... just expect arm ache after a while, as with the arcade version.

With just three fast-paced missions in the arcade mode of the game, the game appears to be over as soon as it has begun (the missions can be completed in less than an hour). To be honest, did you expect an epic 30+ hour adventure from an arcade game intended to be played in quick blasts? Ghost Squad is intended to be played over and over again to unearth all of its secrets and extra content. The shooter's compelling 'pick up and play' nature keeps drawing you back in, and the more you play and successfully complete the missions, the more experience you earn. This levels you up and provides you with more weapons, costumes, and different paths to take through the game. One such unlockable transforms the Indigo Wolves (the game's main terrorist cell) into an army of bikini-clad women. Blocky eye-candy for all.

Which brings me onto my next point: interactive levels. At several points in the missions, you will be provided with several paths to take, for instance you could either stealthily rescue hostages from terrorist clutches or simply storm their hideout with all guns blazing (ho ho). As mentioned before, successfully completing levels will provide you with more paths to take, adding to the title's replayability and lifespan, and it's likely that each play-through of a mission may end up being different to the last time you played it.

Some missions will often involve paths which require the use of the action button (A or Z on the Nunchuk, the latter button providing easier and more comfortable access). Whether you're rescuing hostages, sneaking about Air Force One, snapping a terrorist's neck or defusing a bomb, hammer away at that action button like there's no tomorrow to progress with the mission. Missions requiring the action button give Ghost Squad a bit of much needed variety, and provide interesting yet short distractions between pumping endless amounts of bullets into the perfectly-choreographed terrorist scum. 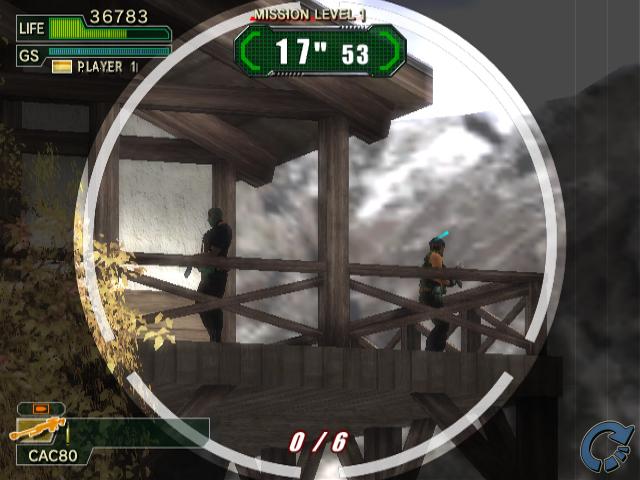 For the brave souls out there who feel ready to put their ruthless murdering up to a new level, there is an option to turn your aim reticule off. Doing so will give you more points for your kills, but I know what you're thinking. Won't the missing reticule render the game unplayable? In previous Wii FPS games (and games which use the pointer), the pointer doesn't usually aim exactly where you're pointing to on the screen. Usually, the Wii Remote must be pointed at the sensor bar, acting as more of a guide for the on-screen reticule. However, in Ghost Squad the reticule sensitivity can be adjusted to your liking, to the point where you can look directly down the barrel of your lethal Zapper, and you can shoot exactly where you're pointing. A lot of work has clearly been put into the controls for the Wii port of the game.

Once you've racked up some nice scores on your missions, you can upload your highscores to the Nintendo Wi-Fi Connection and compare your trigger-happy abilities with sharpshooters around the world. This is a fantastic addition to the game in the absence of a proper online co-op/deathmatch, though I find that I've yet to enter the list of the top 1000 players in the world...

The visuals for Ghost Squad haven't been updated, which can be seen in the endless amounts of jaggies and horrendous looking scenery. But the gameplay is so fast-paced that you won't have time to stop and smell the terrorists, and so the ugly, blocky graphics shouldn't detract from your overall experience. The audio and voice acting is just as bad, though this seems to be intentional, as the over-the-top dialogue between our man Alpha Blue, the Commander and the dreadfully cliché Indigo Wolves often made me chuckle at the sheer cheesiness of it all, like Naked Gun crossed with a particularly strong variety of Stilton. Cutscenes also provide the same levels of side-splitting corny humour, such as the President of the United States highfiving Alpha Blue and Alpha Red after they blow his captor's brains out. And while I'm on it, the bosses seem to be the product of mixing together every Bond villain and giving them 'Disney bad guy' levels of over-exaggeration. 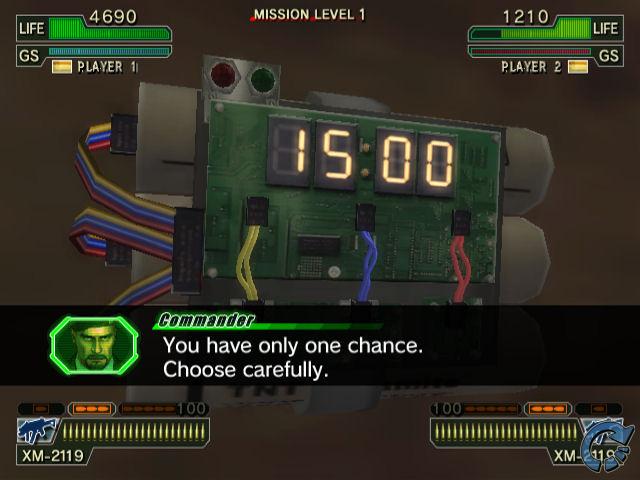 As I said near the beginning of the review, co-op was one of the main hooks of the arcade version of Ghost Squad. This mode is present and correct in the Wii port, with a friend being able to join the action as Alpha Red at any point during a mission. Competing with a friend to get the most kills is as fun as ever, and there's even a Ninja Mode for 4 players to rush through the main missions together. Even Training Mode has a multiplayer option, which is helpful for brushing up on your reticule-free shooting.

This title may not be for everyone. Its short single-player may be off-putting for many people, but Ghost Squad has enough replayability and unlockables to keep you hooked to your Wii Zapper for weeks until you finally squeeze every last secret out of it. Being the first game to work perfectly with the Wii Zapper is an achievement in itself, but Ghost Squad should also be praised for the fact that its conversion to the Wii has not caused a loss of any of its good points; Ghost Squad is a lot better on the Wii, as if the waggly wonder is the platform it was originally intended for. The success of Ghost Squad gives me great hope for upcoming lightgun games like House of the Dead 2&3 Return. If you're looking for a frantic, fantastically fun game that can be picked up for a quick blast at any time, look no further than Ghost Squad.

An addictive arcade port with loads of unlockables which works perfectly with the Wii Zapper.