The game starts off in Heroki’s village, Levantia. It’s a colourful place that is filled with creatures that have propellers for heads because, why not? It’s here where the Emerix, a powerful emblem that helps protect the village, is stolen by the antagonist of the game, Dr. N Forchin. Like most platformers, the story is pretty throw away but it does help frame the game and introduce you to the lovable Heroki and what a cute little character he is.

The game itself is hard to categorise. I’d say it’s a platforming game but without the platforms. You see, Heroki and his people move around the place via the little propellers on their heads that I mentioned earlier. You can land and run along the ground but this is a lot slower and is only used when trying to fit through a tight spot, which is worth doing at every available opportunity due to how hilarious his animation is while running across the ground. 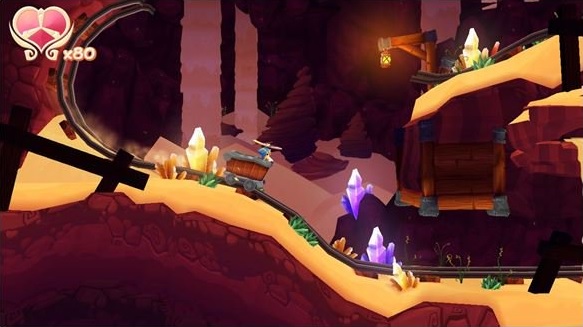 You control Heroki with the left control stick. It may take some time to get used to how he floats and glides through the air but I personally didn’t have a problem with it. Other things that Heroki can do is pick up items and curl up into a tight form and then essentially dive bomb into breakable objects.

Pressing the ‘Y’ button will allow you to pick up crates that are scattered around the levels. You can then use these crates as a throwing object and launch them at enemies. This is done in a similar way to the Yoshi games where you would aim your eggs and then let fire. It’s the same principle but with crates. Some of the crates will have useful items in them, such as a health pick up or shield, so it’s well worth keeping an eye out for those, especially for the shield power up as this will allow you to take an extra hit and will come in handy when trying to make your way through a tricky flying section.

The dive bomb move that I mentioned can be activated by pressing the ‘B’ button. This is used to access new areas of the levels and also to get around stages a little quicker. To stop the dive you just need to flick up on the control stick. This can be upgraded later in the game to allow you to damage enemies while using it. As the game progresses you will unlock more moves, such as the ability to use the power of wind to clear leaves and poison gas and a charge attack that lets you break through walls. 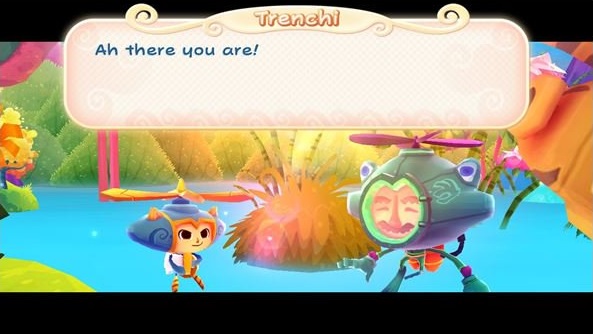 I didn't know Tingle was in this game!

The levels themselves look lovely, with bright and vibrant colours bursting out of the screen. With the main feature being able to fly, the levels do have a lot of verticality to them. It’s not a question of just going from left to right until you hit the end goal but it feels more like an adventure, with the player having to find switches to open doors or pull levers to create new openings. This leads to a lot of exploration and you get to see some very nice level design while playing through each of the 24 levels. The first world is a kind of tropical place, the second an underwater world and the third a desert/mine area. Sure, they are standard settings for these types of games but the art work is lovely in each of them.

Scattered throughout the levels are coins that can be collected. These are the currency of the game and you are encouraged to pick them up in order to buy items at the hub area, which can be visited after completing each level. By visiting the shop in this hub area you will be able to purchase things like extra lives or health pick ups. Also in the shop are 3 items that act as upgrades and help you on your adventure. There are some x-ray glasses that allows you to see secret areas. The Safe lets you keep all of your collectables if you die and the final item you can purchase doubles the amount of coins to collect. Each of these comes in very handy and are well worth purchasing as soon as possible. 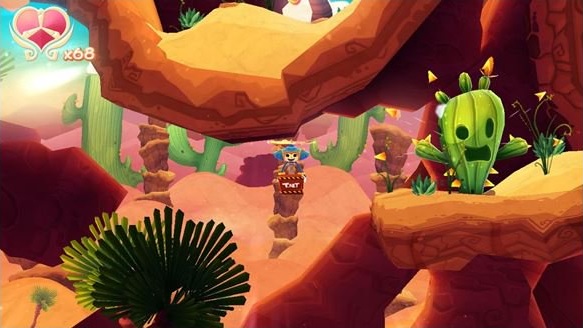 The cactus enemy doesn't look too thrilled with Heroki's weapon of choice.

Elsewhere in the hub are a bunch of other places to visit. There is a laboratory and bakery where you can buy more items to help on your travels, such as the shield power up or cakes to restore your health. These items can be saved in your inventory (there are 3 empty slots to fill) and can be used at any point within a level. There are also little mini games to play in the hub. Visit the giant palace and you will be treated with a True or False quiz that will dish out coins if you win. The farm also has a mini game that requires you to stack bundles of hay as fast as you can in order to win coins. Finally, a couple of the residents will offer side quests for you to complete. These range from getting a ball out of a tree for a child, to hunting down 3 hidden items, one in each of the worlds. Doing these things can help add a bit of variety to the game and are also a great way to earn extra money.

For the people who enjoy trying to 100% a game, this offers a nice amount of collectables to hunt down. Within each of the stages lies a chest, letters that spell out H-E-R-O-K-I, much like the Donkey Kong Country games, and 5 emblems called Emirals. The treasure chest usually has an item, such as an extra life or shield, and the Emirals are used to unlock new areas and moves in the game. With the levels being so compact it makes looking for each of these things very enjoyable rather than a chore. Veteran gamers who have played a lot platforming games will recognise the signs for where things are hidden but there were still times where I did have to scour the area that little bit extra in order to find what I was missing. 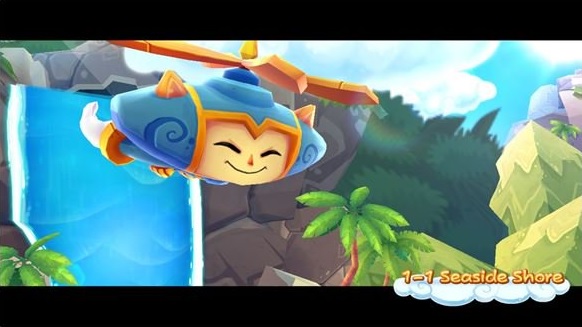 Heroki is heading to the seaside. No wonder he looks so happy!

Once you have finished a level the game will reward you with a score out of 100. Each of the items that you collect will add to this score, so if you want to get perfect marks then you will need to find everything the level has to offer. If you do happen to miss something there’s no need to worry as it’s not a deal breaker. You can revisit any of the levels you have previous played and once again go on the hunt for the things that you may have missed.

Working your way through each of the 24 levels will take a while if you are to collect everything, especially if you miss something on your initial run. Once you have made it all the way through the game you will be faced with a final boss fight. It's an easy fight but the game should be measured on the journey and not the ending. With variety in each of the worlds, a lot of things to seek out and a host of mini games and side quests to take part in, the game will keep you busy for a while and is well worth the asking price of £8.99.

I’ve never been a mobile phone gamer, partly due to my iphone not being up to scratch, but mostly due to the games that are on that platform don’t really appeal to me. This game has proved that there are quality games to be played on mobile devices and that if ported over to the Switch with some care and attention that they can work on Nintendo’s platform.

Heroki has certainly opened my eyes a little and I look forward to what Picomy has to offer next. If you are in the market for a cute, colourful and relaxing platforming game then I highly recommend you visit the eShop and pick this up. This is yet another hidden gem on the Switch.

The easy difficulty may be off putting to some

With the main feature being able to fly, the levels do have a lot of verticality to them. It’s not a question of just going from left to right until you hit the end goal but it feels more like an adventure, with the player having to find switches to open doors or pull levers to create new openings. This leads to a lot of exploration and you get to see some very nice level design while playing through each of the 24 levels.