Knights seem to be popular in videogames these days, especially among indie developers. 2Awesome’s recent title Horned Knight is one more in the list of hopeful knights looking to make a dent in the 2D platforming scene. Can this fancy, horn-helmeted knight shovel through the competition, or will its efforts prove hollow in the face of ghostly and ghoulish adversaries?

The first aspect of note is that there is no plot whatsoever. Who is the horned knight? Why does he fight? Is he seeking something? Rescuing someone? Or is he a she? Why did they put horns in their helmet? What are these castles they are traversing? I fear we may never know.

Indeed, Horned Knight is all about the gameplay. Going through enemies, and avoiding increasingly complex obstacles and traps. The raw 2D platforming of yore, like we used to have back in the NES or even SNES era. 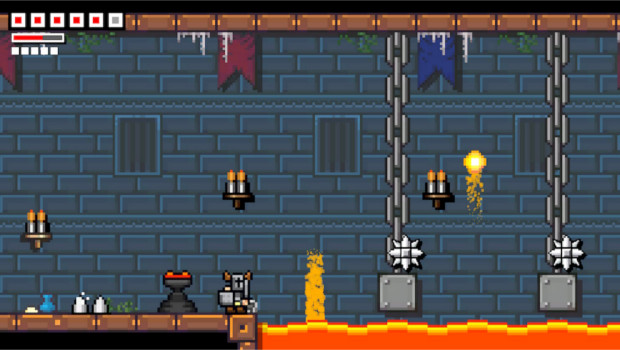 A game such as this lives and dies by gameplay and level design. It’s a good thing that our horned fellow moves well, then. Running at a brisk pace (with either stick or d-pad), responsive jumping of various heights (B button), and a very versatile air-dash (A button + desired direction). You can use this move to quickly lunge forward in the air, to launch yourself straight up (as a makeshift second jump), or even to combine the two and launch yourself diagonally for better air control. It’s a fun move to make, too.

The horned knight can also drag themselves down a wall, wall-jump very effectively, and seamlessly combine that with ait dashes for some very fun vertical movement. There are no extra skills to unlock or anything, the horned knight’s movements are consistent from beginning to end.

Thankfully, the game doesn’t expect you to master these moves right away, as it kindly provides a fair difficulty curve for the player. The level design starts out quite merciful (if you pick Normal Mode first, at least), giving you space to get to grips with the controls and movement before throwing trickier obstacles at you, such as fire bars, moving saws, or waves of fireballs.

The level structure is straightforward: reach the end goal. That’s it. No collectibles, no alternate paths, no fancy secrets. The only catch is that, if you finish a level without dying, you’ll get a “Perfect” and a ticked box in the level select screen. The only variant to this formula is that some levels are more vertical and feature rising lava (but there’s still an end goal to reach anyway), and the only exception to the formula are the boss levels (which only end when the boss is defeated, natch). 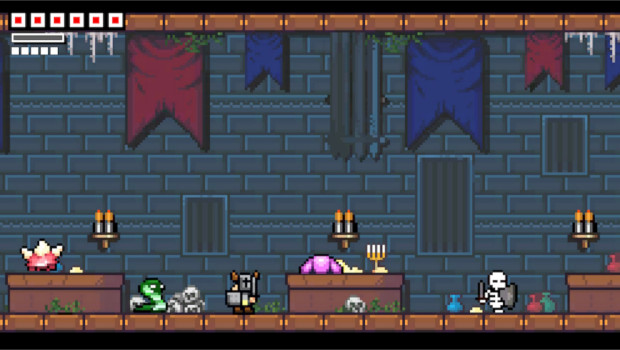 Snakes and Skeletons and Slimes and Spinies, oh my.

But wait, bosses and enemies? The horned knight engages in combat? Indeed he does, but sadly, not very spectacularly. You can press the Y button to swing your sword a single time in front of you, either on the ground or in the air. Without any extra moves, you might think it doesn’t sound too engaging, and you’d be right. Killing enemies is quick and easy, perhaps too much so, and there isn’t even a satisfying weight or sound effect to the swing. Worse still, swinging your sword halts any forward momentum you had going, so it even makes movement rougher.

There is one interesting combat-related mechanic though. After you defeat a set amount of enemies, you recover a bit of health. Without health pickups, defeating several enemies is the only way to heal the horned knight.

As for the enemies themselves, they aren’t that interesting. There are only five types of enemies in the game and, besides the bats, they are all functionally the same: they walk back and forth, and they die to a single sword swing. Some happen to deviate from the norm by shooting fireballs or, more annoyingly, taking two hits to die, but there is no visual distinction until you approach them, which is counterproductive. A bizarre decision, to effectively have different types of enemies, but not have those attributes be related to their appearance.

They don’t look very memorable either (nor do the bosses, for that matter), which is the fault of the game’s generally bland aesthetic. They’re stock videogame enemies in stock castle environments. Throughout the game’s 32 levels, only small variants of these backgrounds exist (with slightly different colours and tilesets). 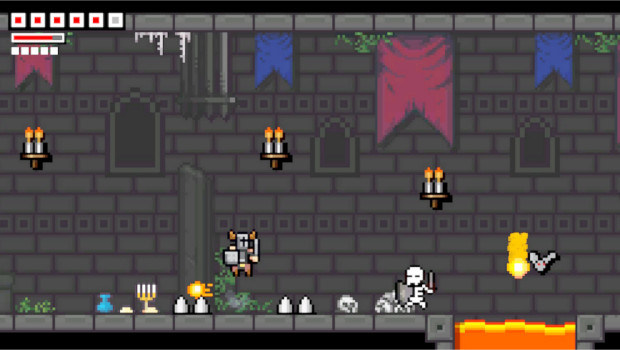 Horned Knight is a short game, as these 32 levels can be beaten in roughly one hour. In a way, Horned Knight feels like a flash game. It’s well paced and designed, but with its accessible controls, short length, and simple presentation, I cannot help but draw the comparison. However, considering it was mostly made by one person (Josep Monzonis Hernandez), and at the low price of 5,99 €/£, it feels fair.

It should be noted though, that Hard Mode changes the game considerably. Normal Mode provides infinite lives, and defeating several enemies heals the horned knight. Hard Mode limits your lives, and defeating enemies grants extra lives instead (which also means that finishing a level with a Perfect becomes harder). More importantly, level layouts are changed quite a bit to make levels even more merciless, so you could conceivably count these 32 levels as 64.

One odd limitation with this game however, is that you cannot have more than one save file. This would normally not be an issue with a game this short, but since difficulty level is tied to the file, the player is unable to have a Normal Mode and a Hard Mode playthrough at the same time, which may be an issue for those with more than one person in their household.

Horned Knight is a simple platformer that distils the genre to its rawest elements. Despite its shortcomings, it should satisfy any player looking for exactly that.

The level structure is straightforward: reach the end goal. That’s it. No collectibles, no alternate paths, no fancy secrets. The only catch is that, if you finish a level without dying, you’ll get a “Perfect” and a ticked box in the level select screen.