Do you know what my favourite game on the Wii U was? Well, OK, it was Smash Bros. But my second favourite was Hyrule Warriors, a spin-off title that mixed the Dynasty Warriors series of games with the Zelda franchise to provide a very silly and entertaining hack-and-slash game stuffed to the brim with characters from multiple Zelda games, and a ridiculous amount of content to play through. The 3DS rerelease added even more stuff, and the Definitive Edition currently on Switch is one of my most played games on the console.

So you can imagine I was very excited when Hyrule Warriors: Age of Calamity was revealed. A sequel to Hyrule Warriors that also serves as a prequel to the mega hit Zelda title, Breath of the Wild. A presequel if you would, a made-up word that I will now go and trademark.

The game begins with a small Guardian that sounds a lot like R2-D2 escaping from Hyrule Castle (after it has been taken over by a malevolent entity called Calamity Ganon) by travelling through some kind of time portal back to 100 years before Breath of the Wild takes place. Link from the past, along with Princess Zelda, meet up with the Guardian, discover pictures of the future devastation that will befall them, and strive to work together to stop Calamity Ganon and change the future for the better. 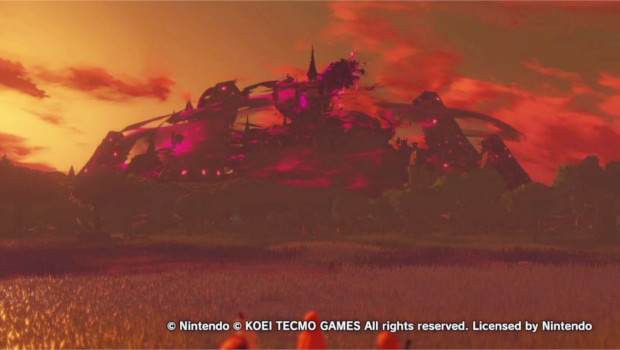 Simply put: That bad, don't do that.

The plot assumes that you’ve played Breath of the Wild and seen the various flashback scenes that game has, making no apologies for those who may not have done so. Because of the larger focus on plot, Age of Calamity has a far more serious tone to it than the original Hyrule Warriors, which basically had an excuse plot to drive the gameplay forward. I won’t go into too much detail to avoid spoilers, but I will say that, while there are a few aspects I take issue with, it is an enjoyable story with some good character arcs that I always thought Breath of the Wild failed to utilise. It feels like an honest to goodness Zelda plotline, and that pleases me. Although, the voice acting has a few performances that bother me. Zelda still has that obvious fake British accent and it detracts from her character a tad.

The setting for Age of Calamity makes for a perfect backdrop for the action packed gameplay of Hyrule Warriors. You can’t get more suitable than a full out war, after all. The basic gameplay involves you controlling a number of characters around a battlefield, completing objectives while delivering ridiculously elaborate smack downs to large amounts of enemies at once, to stop them from overwhelming your absolutely useless army. Each character shares the same method of attacking; multiple presses of Y delivers quick chains of attacks, while pressing X will perform a stronger finisher attack. Which finisher you perform is determined by how many times you pressed Y before pressing X. 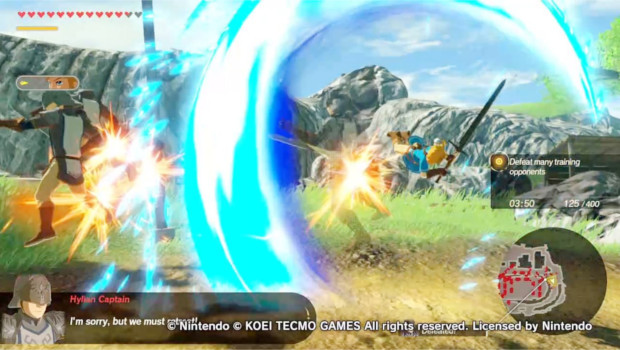 I've been there, Hylian Captain. I once had the sudden urge to ©Capcom.

Outside of the basics, I was surprised by how complex the combat got later on. You can use the 4 Sheikah Slate runes that Breath of the Wild featured to help devastate enemies, and each of the many characters you can play as uses them in different ways. Using the correct rune at the correct time can counter an enemy's attack and reveal a weak-point gauge that, if you deplete, will allow you to deliver a devastating blow. As well as this, you can press A to perform a Special attack once your special gauge is full to do major damage and force enemies to show their previously mentioned weak-point gauge. There’s also consumable wands that can have their effects magnified if used in the right place, as well as the flurry rush mechanic from Breath of the Wild, which works a lot better in this game than it does in the actual game it originated from. It all comes together to make the combat less mindless button mashing and something closer to the likes of Bayonetta. It’s easily the best thing about Age of Calamity!

Unfortunately, the price for this satisfying combat seems to be the strategic aspect of Hyrule Warriors. I know it doesn’t look like it, but the original Hyrule Warriors hid a surprisingly strategic component to it that made the game less about killing everything in sight and more about picking your battles, placing your overpowered character of death in the right place to deal with unexpected occurrences that emerge. There were even some cool twists on the standard gameplay, such as quizzes on your Zelda knowledge. Age of Calamity has pedalled back on that quite a bit, with moments where you have to prioritise your objectives being few and far between. The closest this game had to a gameplay twist was having to protect a fortress from a horde of enemies. This isn’t helped by the decision to model areas very closely to how they were depicted in Breath of the Wild. While fans of that game will no doubt appreciate the attention to detail here, I just found it impeded my enjoyment of the game a bit. Nothing accentuated this more than Hyrule Castle itself. It’s a great place to explore in Breath of the Wild, but in Age of Calamity, it’s too narrow and confusing for the kind of gameplay you’re expected to perform.

With the bigger focus on plot, I was a bit concerned that the amount of content would have to be compromised, but I was very wrong on that. The story mode and adventure mode from the original Hyrule Warriors have been effectively combined into one massive map of Hyrule. There are well over 100 short missions to complement the main story missions, making for over 80 hours of gameplay on my copy, and I’m only at around 90% completion now. The amount of characters to play as is comparable to the original Wii U version of Hyrule Warriors, and I am happy to confirm that they all have a unique move set (Which was my biggest gripe with Fire Emblem Warriors). For example, Impa is able to create shadows of herself to fight alongside her, while Revali naturally excels in the air. Each character is loaded with bespoke combat mechanics, making their respective gameplay feel completely unique & distinct from one another. I’m even happier to confirm that this game doesn’t shy away from the wackier characters that I loved about the original game. It still has that element of fun about it. 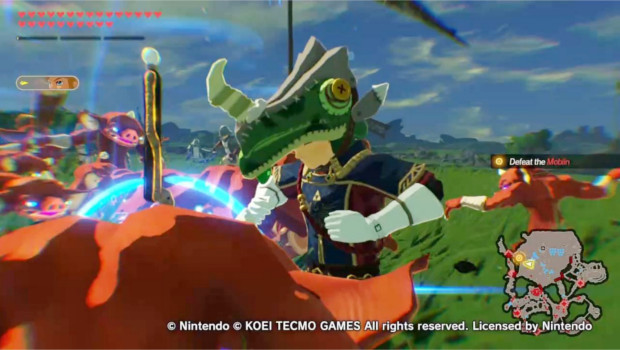 Impending doom for all the land? No worries! You have a stupid looking mask!

The game looks fine, mostly reusing assets from Breath of the Wild, which had a very pleasing art style, but the frame rate is prone to dropping in areas with rain or grass, and it can get even worse when using characters with flashy visual effects such as Impa or Urbosa. Boot up the split screen multiplayer and mix all of the previously mentioned aspects together, and it gets comically bad. Although at that point, you’re probably just doing it to see how low it can go (At least, that’s what I did). Multiplayer is a good laugh if you have a local friend, even if it can get a bit hectic and confusing at times. The camera does show some issues occasionally, mostly when going uphill or when you’re fighting in cramped quarters.

Finally, there’s the soundtrack, which blew me away with how good it was. I always thought Breath of the Wild, while having a few good songs, was far too minimalist for my liking. Age of Calamity takes that soundtrack and provides marvellous remixes that fit the hectic gameplay throughout. It’s a joy to listen to. 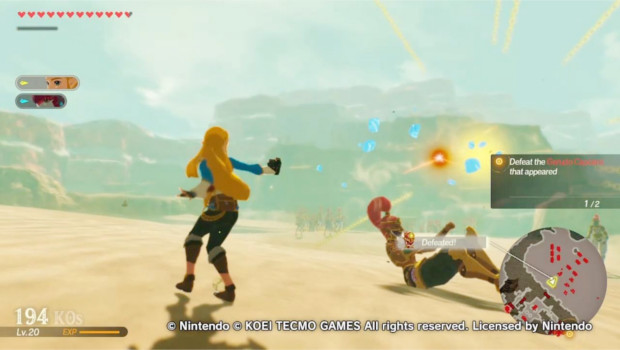 Hyrule Warriors: Age of Calamity manages to deliver a good narrative, coupled with action packed gameplay, combined into a very satisfying game. That said, if you’re going into this expecting the slow paced exploration of Breath of the Wild, you’re going to be very disappointed. This is most certainly a Hyrule Warriors game first and foremost, with a hint of Breath of the Wild.

Hyrule Warriors: Age of Calamity takes a story that was a bit underdeveloped and uses it to great effect for a fun hack-and-slash with better combat than the original Hyrule Warriors. There are some issues with the frame rate and the strategic aspect of it all, but the positives outweigh the negatives.

The setting for Age of Calamity makes for a perfect backdrop for the action packed gameplay of Hyrule Warriors. You can’t get more suitable than a full out war, after all. The basic gameplay involves you controlling a number of characters around a battlefield, completing objectives while delivering ridiculously elaborate smack downs to large amounts of enemies at once, to stop them from overwhelming your absolutely useless army.