The Kirby franchise has been very well represented on Nintendo 3DS in the past few years, with excellent platform titles like Kirby: Triple Deluxe and Kirby: Planet Robobot, plus a number of spin-offs, such as Team Kirby Clash Deluxe and Kirby's Blowout Blast, not to mention Virtual Console titles starring everyone's favourite Pink puffball.

But for those with appetites as insatiable as Kirby, there's yet another 3DS game to check out now in the form of Kirby Battle Royale. 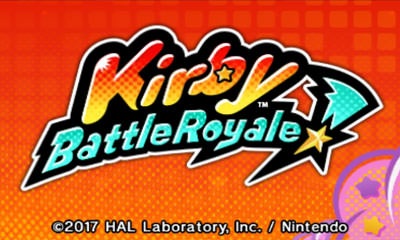 Ready for even more Kirby on 3DS?

Unlike Triple Deluxe and Planet Robobot, however, Battle Royale focuses primarily on multiplayer. There is a single player story mode, but it's entirely based around the exact same content from the multiplayer aspects of the game, which is a bit of a problem as that isn't a great deal of content in the first place. In fact, there are only 10 mini-games in total (5 of which are available right from the start, with an additional 5 to unlock) and seeing as how each one only lasts for a few minutes (occasionally a few seconds), within less than an hour you will have seen pretty much all there is to see.

Things don't get off to a particularly great start either, as the game takes approximately 20 seconds merely to load the title screen from the 3DS menu, not that you would know it was doing anything, seeing as all you get during that time is a couple of completely black screens to look at. Perhaps this isn't an issue with the New Nintendo 3DS systems, but for anyone using the original 3DS it's something to be aware of, not to mention an annoyance for a game that is clearly designed to take advantage of quick play sessions. 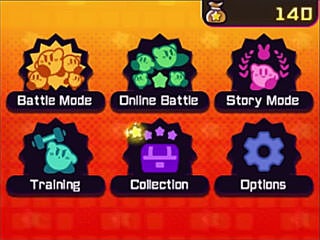 The menu screen looks quite promising, but don't let it fool you.

Once you finally make it into the game and go through a brief tutorial which details Kirby's basic moves, you'll be presented with various game modes to choose from, including Battle Mode, Online Battle and Story Mode. In Battle Mode you can create a customised session by specifying the number of games to be played and their order, once set you will be able to take on the CPU (either alone, or with a CPU ally) or play against friends using local wireless. Download play is also supported.

Online Battle is more or less the same thing, only far more restricted. A big disappointment is the inability to play with friends, instead the only option here is ranked battle against random opponents. Furthermore, it's not possible to choose a specific mini-game to play, you are limited to voting from a randomised selection of 3 each time.

But worst of all when it comes to online play, is just how sluggish it all is. Matchmaking can take a ludicrously long time to find 3 opponents, and when you do eventually manage to enter a game the performance can be very poor indeed, with gameplay often slowing to a crawl on more intense games. 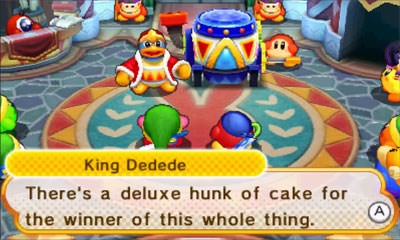 Yep, the story is that ridiculous.

So what about Story Mode? Well, unfortunately it really is just more of the same. The only difference is that instead of setting up games from the Battle Mode menu, you now talk to a Waddle Doo to basically achieve the same goal. This mode is broken up into 5 leagues, Beginner, Bronze, Silver, Gold and finally Platinum. But all you are doing in each one is repeatedly playing through the same selection of 10 mini-games with a CPU ally.

Clearing a game awards League Points, and the amount of points required to reach the next league increases every time, meaning you have to play even more of the same mini-games over and over again in order to proceed. Various abilities are unlocked as you progress, and the Platinum League also introduces Boost Orbs, which provide temporary perks that can be assigned to and activated from the touch screen, but the incentive to play through the entirety of story mode is very low indeed.

It should be clear by now that the three main modes of Kirby Battle Royale all revolve around the same mini-games, which generally involve collecting and storing more of a certain item than your opponents within a time limit. But a few are focused purely on combat, and it's actually possible to attack in any of the mini-games in order to temporarily K.O. other players, or cause them to drop their collected items.

While the mini-games are all quite similar there is at least some variation thanks to different stage layouts and (eventually) the Boost Orb mechanics. And for those playing alone, the CPU AI does a considerably good job of keeping up with you, making smart decisions in both defensive and offensive play, for example, in the apple collecting game where you have to place apples over a trap door and then pull a lever to open the door, your ally will often move to or wait by the lever if you're already on your way to the door or carrying a lot of apples. 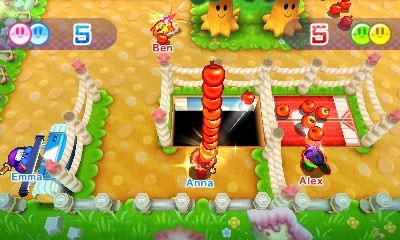 This would've looked nice in 3D, shame S3D is not supported.

Winning games in Battle Mode and Online Battle will reward you with Battle coins that can be used to unlock abilities, costumes, music and Boost Orbs. But unlocking everything will be quite a test of endurance, as the cost of some items is very high in relation to how much is earned from winning games.

Although there are also achievements (in the form of medals) that can be obtained for completing certain tasks, and these come with the added bonus of rewarding a large number of coins in one go. There is also amiibo support, but it's limited to the Kirby series and only a single use to unlock special costumes.

In terms of presentation the game is quite good, the usual bright and colourful Kirby art style is on display here (albeit without any stereoscopic 3D effect) and Kirby and Co. are well rendered and animated, but as the action is seen from a rather zoomed-out view (in order to accommodate 4 players on screen simultaneously) most of this detail is lost. You do get to appreciate it whenever characters jump towards the screen to celebrate a victory though, and Kirby's dance move repertoire now includes arm waves and samba footwork, which is absolutely hilarious and masterfully animated for a character with such a limited range of movement.

Ultimately the game feels a little bit like an unfinished product, at least in terms of being distributed as a full retail title. Had it released as a lower priced eShop download it would've been somewhat easier to overlook a few of the issues.

But as things stand the amount of content on offer in Battle Royale is simply not enough to warrant a €39.99£34.99 price tag, especially considering we've already seen far more accomplished and substantial Kirby games on 3DS in that same price range, and better alternatives in the download exclusive space as well.

Kirby Battle Royale is a very short game with a focus on multiplayer, unfortunately the lack of content, repetitive nature and a problematic online component severely hurt its longevity. Diehard Kirby fans may get slightly more enjoyment out of it, providing they're able to take advantage of local multiplayer.

Some of the mini-games are great fun
Good CPU AI
Kirby's dance moves!

...there are only 10 mini-games in total and seeing as how each one only lasts for a few minutes, within less than an hour you will have seen pretty much all there is to see.