For what seemed to be the longest time, children and big kids the world over were forced to live out their Star Wars fantasies with the misshapen bit of their old Lego kits, until some bright spark decided that the two would make such a powerful combination. Finally our prayers were answered!

The next logical step would be into the complicated world of video games for both. But wait! It had already been done with a mixed amount of success for both properties: in particular, the Lego games have been just awful. And the Star Wars games have been a sad bunch with a few stand-out titles and plenty that really didn't live up to their promise. KOTOR, we're looking at you. It is no surprise really then that the Lego Star Wars series has produced a few stinkers as well as a couple of good games, fortunately this is one of the not so bad ones.

This new "Complete Saga" combines both good Star Wars movies with the other four to create the complete version (in Lego) of one of the most famous stories ever told. And luckily, you are not forced to sit through the entirety of the three prequels before enjoying the original trilogy. Well, enjoy A New Hope and Empire Strikes Back at least.

Fittingly, the levels based around Episode 2 and Episode 3 are very short, in an homage to the fact that there's no real story or anything of interest in those two movies. For canon-fanatics and Star Wars fans, there are some astonishing story and factual errors that repeatedly crop up that make the transition from the big screen to small much smoother: anyone who knows the movies will be incredulous at the liberties taken. However, most of these are in the interest of keeping the action flowing and are above averagely successful. In the name of fun though you will let these things slide and the hilarious send-ups should keep a smile on your face. 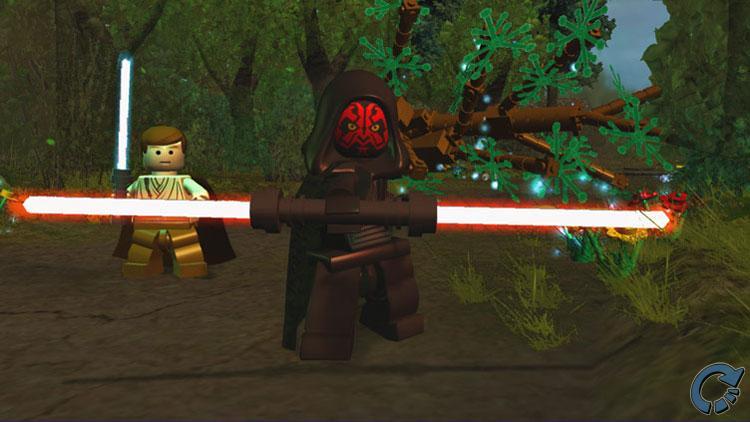 Traveller's Tales have done a sterling job translating the dour locales and worlds into brick form. The characters really feel alive through personality quirks such as body language and facial expressions that lend the package a nicely tongue-in-cheek feel. Characters explode in a shower of bricks and the in-game currency of studs when they die, the uncomfortable gait of C-3PO is well captured and the lightsabers look great too. You can take off the arms of 3PO with your sabre and shove droids around with your force power, you get to play as Jedi for a lot of the game, which is great.

The developers have really gone to town in making this a fun game for everyone, though how much fun you get out of it will really depend on your age. Young gamers will love it forever: older, more cynical players may not find it such a long-term treat, though it is good for a laugh. The game is kept going by dint of having infinite lives to play with, which is good because sometimes you will be totally overwhelmed by enemies, or cut to ribbons as you try and work out the next step in an obtuse puzzle. These puzzles can be a little confusing and twitchy to react –you may think you are standing on the right spot to activate a button, but you have to stand dead centre or it won't work. Naturally, this is quite frustrating.

Fortunately, the puzzles are as a general rule simple enough, the problem is having enough time to do the right thing before you are inevitably killed. Get used to dying in this game, it's going to happen a lot. There are a lot of characters to unlock and many secrets to learn when you have opened up free-play on a level, but most levels will not have you gagging for a second try, they're either too simple or too dull to make it worthwhile. Speaking of which, the vehicle levels are just awful, the controls are jelly-like and the objectives are extremely unclear. It' unfortunate that you have to play through these to get to the fun parts, especially when things like the podrace from Phantom Menace have been done so well before. Here the race is a terrible ordeal thanks to the imprecise nature of the controls.

The game is easy to play for anyone who has not got much experience with video games, so in this respect it makes a good family game for everyone to enjoy, but not everyone will get equal enjoyment from it. There are Wii controls for the lightsabers, but they are half-hearted and vague at best and those still hoping for a lightsaber game are still going to have to wait for a while for it to happen properly. Also, there are noticeable control issues at some points, double jumping doesn't always work like it should and the aforementioned vehicle sections are bad. Generally speaking, the game plays well enough to enjoy, but it's not perfect. Singular criticism is reserved for some levels where not only is it not clear what you have to do, but the task being made impossible by your characters getting stuck in walls or controls transfer not working because they are on a different level. 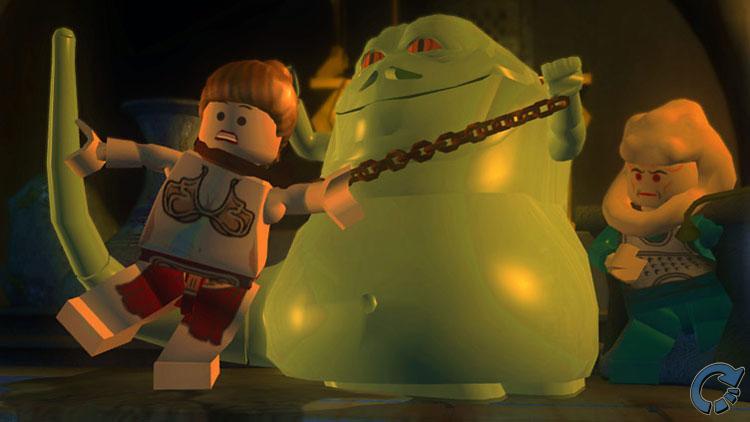 There are some great touches in the sound with the Wiimote producing the electronic whistles and beeps of R2 D2 accurately, as well as the "vwum!" of the lightsabers swings. It's a nice addition and it's almost totally unexpected, so when you first hear it, the surprise is a pleasant one. The sound of the game is much in keeping with the sound from the movies, suitably epic and dramatic in the fight scenes, atmospheric and deep for the swamps and cramped interiors. The characters do not speak, but there is really no need for them to. Their faces tell the story so well and their reactions are so deadpan at times that a voice over would totally ruin things.

The game is best when played co-operatively with a friend, provided that the friend has a similar level of ability. If you are stuck with a younger sibling or someone who has never played a game before in their life, they are going to love it, but you will be frustrated beyond words as the levels can only progress when both of you work towards the same goal. Still, this co-operative mode has a lot of possibilities and the ability to switch your control to other characters during play opens up new puzzles and routes, though the game can be quite linear on the first play through. 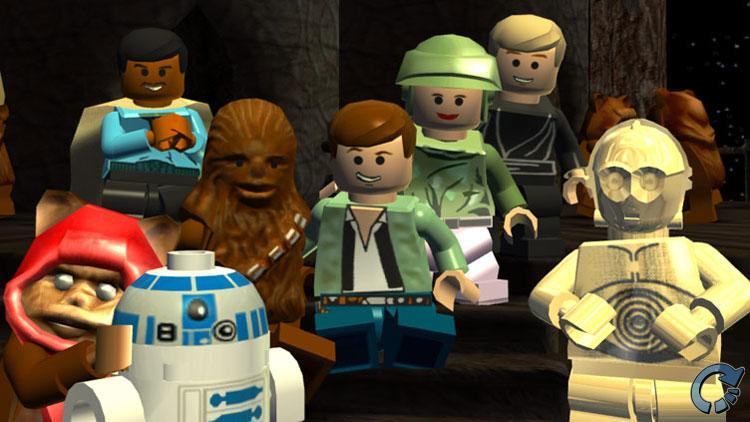 Thankfully, you can punch Ewoks and I personally spent at least one hour slaughtering them at every opportunity, it kind of made up for the film in a very small way. Sadly there is no option to slow-torture Jar-Jar Binks in this game. Maybe it's something to think about next time? Still, you can shove him off platforms and carve him up with the lightsaber.

Overall, this is a great game for the family, nice and simple for the inexperienced, great for the little ones, but not really that brilliant for the older players. So if you're under 10 you can add 2 points to the final score. Ultimately, though the graphics are good, the sound is great and it's easy to play, what let's this game down is the repetitiveness of the play and the levels –in particular the vehicle levels, which are absolutely abominable.

A good game with many flaws you won't notice if you are six.

Repetitive
Difficult and frustrating gameplay
Reminds you that Episodes 13 happened