Despite boasting a myriad of titles featuring a multitude of control schemes, never before has the Wii been graced by something quite as utterly bizarre as Let's Tap; for the unaware (and those who missed our hands-on impressions a few months ago or our Japanese Import review of the game back in February) the game - as the name subtly suggests - has players controlling everything on-screen by simply tapping. The title comes supplied with two cardboard 'tap boxes' upon which you place the Wii remote face-down on one end of the box and tapping from the other end.

It might be easy to be at least slightly sceptical towards this 'new-fangled' control-scheme, but from the moment you start navigating the clear and concise menu's by tapping once or twice - similar to clicking a mouse - the method behind the 'madness' becomes apparent and only gains further literal momentum as you start to make something actually move on screen in the first of the titles mini-games.

Within the test of tapping skill known as 'Tap Runner' you make a stick-man run across a course by using either light or medium taps with firmer taps causing your character to leap into the air; these actions prove particularly essential as you are faced with a whole host of traps and contraptions along the way. In particular you will be heaving over hurdles, stumbling across springboards, blowing up balloons, slipping down slides and literally jumping through hoops and portals all while hopefully not getting electrocuted or squashed in a mad-cap, fast-tap dash to the chequered finish-line. It's fun even playing solo but when you get a few friends playing along the experience comes into its own as hilarity ensues when one of you manages to 'face-plant' themselves over a hurdle or gets 'electrocuted' in fierce competition. 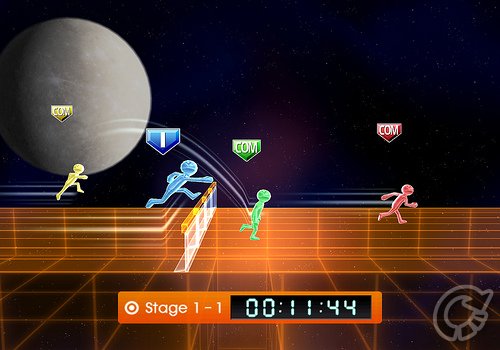 This proves to be an unusually engaging experience for something so simple and sets the scene nicely for what is to follow as 'Rhythm Tap' takes things to new levels; think of Donkey Konga where you have three different rhythm inputs - but instead of drumming and clapping you merely tap... it really is that wonderfully simple, three varying taps - light, medium and hard - plus small sections where you go quickly from light to hard. All you need to do is stick to the rhythm that the truly sumptuous soundtrack provides. There is plenty of scope for replay here especially as some of the tracks are so awesome. When you get more people participating it all becomes a mini tap orchestra of sorts with each person assigned a different part of the melody and it becomes clear to see why this game was made with multiplayer laughs in mind.

Changing pace to a somewhat sedate and relaxed level we have 'Silent Blocks' which plays like part Jenga and part Bejewelled; in its most basic form you merely remove blocks with sideways taps to get the trophy from the top to the bottom without toppling the tower but in Alchemy mode is becomes something else as matching three of the same colour causes the trio of blocks to disappear which in turn creates a single block of another colour. This continues right up until you create a gold block which ends the game, it might not sound like much but it's both fun and challenging and brilliant in multiplayer mode as your pace quickens but at the same time you are ever cautious as one wrong tap can topple the tower effortlessly often losing you the game.

Playing like a modern-day version of the classic Nintendo game - Balloon Fight - the last mini-game called 'Bubble Voyager' has you guide a mini-mech robot type character through an endless flying stage where you tap mildly to maintain altitude and tap hard to fire rockets to destroy blocks and other such obstacles. You have an energy meter which depletes slowly as you travel and will decrease greatly if you fly into obstacles, this energy can be replenished though by successfully landing as specific points or by picking up batteries; it may sound simple but it can be hard to master. The multiplayer however plays more like a deathmatch version of asteroids in which your character rotates on an axis instead of side-scrolling. 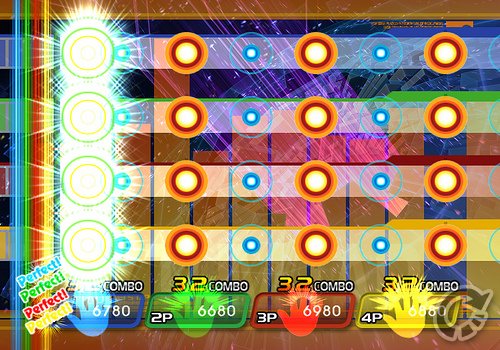 Finally there is the Visualiser which is essentially what it claims to be and nothing more, you choose from such scenes as fireworks, paints or underwater fishes and then tap to make more things appear on screen; the twist is that there are specific tap combinations assigned to each thing that appears and it's fun to discover them all. Ultimately though, this fifth 'game' is nothing but an elaborate - though very nice - screen saver so don't expect to be blown away by it like other modes.

Regardless, though this is still a pretty comprehensive package overall which is delivered in such an original way with top-notch presentation and visuals. Most notably, the game is accompanied by one of the most sublime soundtracks that I personally have heard from a Sega affiliated game for years. The creativity utilised here harks back to the days when Sega themselves were far more creative and less restrictive; while it's true that this may be a relatively short-lived experience it is most certainly worth it simply for the amount of joy that this budget title can bring. If you won't take my word for it then take a look at what the rest of the N-E team thought of this simple but charming title.

Read on for the final scores and other thoughts from N-Europe staff...

Says Nathan: With Let's Tap, Prope promised a unique gaming experience that even a penguin can play. I don't know about anyone else, but I've met a penguin. It attacked me. Were it not for my sandal, the vicious blighter would have cut my foot to ribbons with its beak. I suppose it was my fault for attempting to climb over a wall without checking to see if a penguin was sleeping in a nest of discarded newspaper pages on the other side first, but that's beside the point.

If my monochromatic assailant's strength is anything to go by, then the entire penguin race is capable of a pretty good tap. I appreciate what Prope have gone for in terms of accessibility and intuitiveness here, but a line has to be drawn somewhere. Allowing dogs their own profiles on Walk with me: Do you know your walking routine? was pushing it, but I refuse to accept the possibility that a penguin may one day be able to challenge and defeat me on my own gaming turf.

Other than that, it's a pretty nice package. Providing the animals are kept away, it gets my vote. 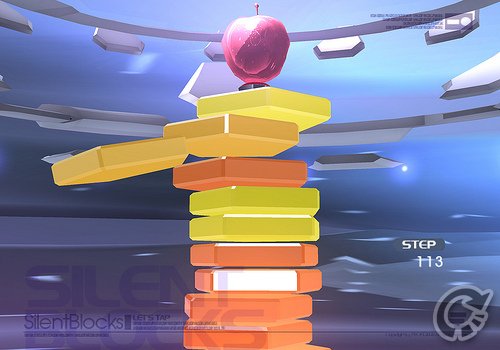 Says Steven: What drew my attention to Let's Tap? Frankly, the initial batch of stylistic screenshots followed by learning about how you are meant to play the game. Since getting my mitts on the disc and boxes I can confirm that it looks psychedelically good, is mental to play and for such a low price, you should be more than willing to jump on the "support the dev" bandwagon. All that and of course the fact that you can never have too many multiplayer games, can you?

Out of all five modes, I found that I took an immediate shine to Rhythm Tap. I confess that I don't like music video games, Elite Beat Agents on DS being the exception. With Rhythm Tap bearing similarities to Donkey Konga I was genuinely surprised to find I got instant enjoyment from tapping out the beats. The simple premise of gentle, medium and strong tapping was easy for me to grasp, then I found that I could play it by using the fingertips of only one hand on the box- leaving my other arm free to swing around and conduct the music... but maybe that's a confession to far. With all my bad memories of Donkey Konga dissipated, I tapped through all the tunes and was only left wanting more, something I can safely say I've never felt with any other music game. Clearly it struck a chord with my penguin like mentality. 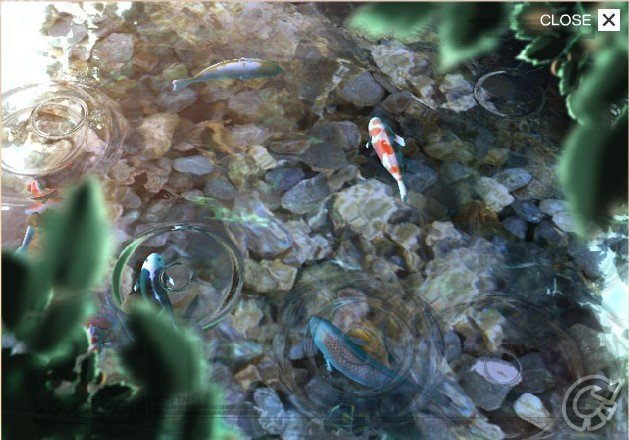 Says João: While all the modes have their charm, two stand out from the crowd and will most likely monopolize the play time: Tap Runners is an incredibly addictive and psychedelic experience and Rhythm Tap, even if completely devoid of any challenge, is fun as hell. That doesn't mean the other modes can be discarded though, Silent Blocks is good laid back fun, Bubble Voyager is a cool arcade experience and Visualizer is the pinnacle of Let's Tap experimental nature.

I can say without doubt that what was already a very fun and quirky game, perfect for parties and small bursts of gaming, now seems a much more worthwhile purchase considering the small price tag. Tap away! 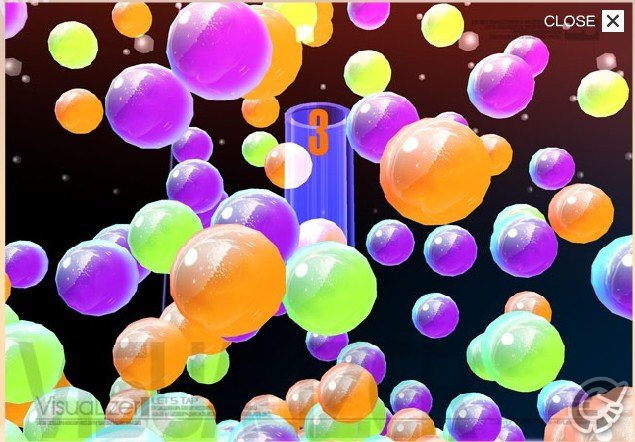 Says Tom: It isn't often that a title comes along which truly offers you something different. And while some may argue the Jenga/Balloon Fight/Donkey Konga style modes are far from unique, I have to say that the totally fresh control style, highly polished visuals and memorable melodies will bring you something unique enough the package as a whole is rather irresistible.

While the experience is somewhat limited in single-player (you'll zip through unlocking everything in a few hours), the replayability factor is high (for the reasons listed above) and the opportunity for multiplayer hilarity is one that has to be played to be believed.

In short: we'd definitely all tap this.

Prope proves a simple concept can go a very long way, and while the experience won't last forever it's a game you'll remember. Pure fun.

It won't last as long as some may like.