The Super Nintendo was absolutely jam packed with RPG’s! Well… unless you lived in Europe… We basically got next to nothing in that regard. Something about RPG’s just didn’t inspire business confidence in bringing them over to the continent back then. Of course, these days, most games are released worldwide, making this a problem of the past.

I bring that up because it’s very relevant to the game I’m reviewing here. Live A Live (Live is pronounced like “Live Show”) is one of those SNES RPG’s that has been confined to Japan ever since its initial 1994 release. 28 years is a long time, and it’s given the game a bit of a reputation as a lost classic. So, when it was revealed that Live A Live would finally be coming out of Japan in the form of a HD-2D remake, I was pretty excited to finally be able to give it a go.

Live A Live is a turn-based RPG (most of the time) that focuses on 7 people from different time periods, ranging from prehistoric times to the distant future. RPG fans out there will probably already be making comparisons to Octopath Traveller, another RPG done in the HD-2D style that also structures its plot on several separate stories. As you progress, you’ll find out what exactly connects the various time periods together, but I won’t go into too much detail.

If you’re looking for a traditional RPG plot, you’re not going to find it here. Live A Live isn’t some sweeping epic that focuses on saving the world, the 7 stories are on more of a personal level. If you played Octopath Traveller and didn’t like the story for that reason, then maybe Live A Live isn’t for you. For what it’s worth, I enjoyed it a bit, and the payoff at the end was cool, but it’s an experimental structure for a game that debuted on the SNES. 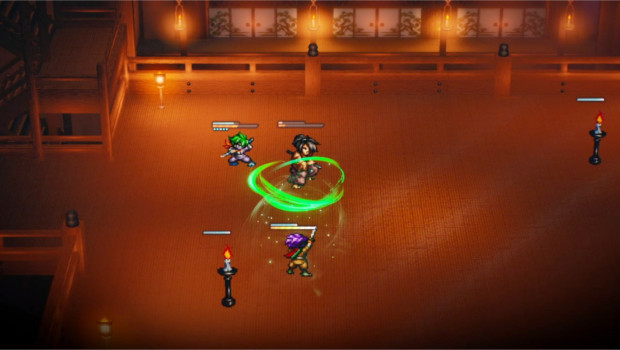 I find the best samurai defence is to draw green lines all over them.

I normally start with the gameplay aspect whenever I write a review, but this time, I’m gonna start with the presentation side of things, as it’s a lot more straightforward. As I mentioned before, Live A Live utilises the HD-2D we’ve been seeing from Square Enix in the past few years. It’s a mixture of 3D environments and old-school 2D sprites that create a very beautiful looking game. Honestly, out of the three RPG’s I’ve played with this art style, Live A Live might just be the best looking. The colour palette pops out of the screen and the environments of the 7 time periods are awe-inspiring at times. I wish I had a Switch OLED, because I imagine it looks gorgeous there.

The sound department is certainly no slouch either. Yoko Shimomura, the original soundtrack composer, was brought back to do the soundtrack for the remake, and she knocked it out of the park here. Each time period has a distinct style to the music that really stands out. The game is also fully voice acted to boot, and I found it to be very well done. With the many different countries the game takes place in, I was pleasantly surprised at the quality throughout.

So far, I’ve been heaping a lot of praise on the game, but when it comes to the gameplay, things get a bit more difficult. Battles are an interesting mixture of the ATB system (of Final Fantasy games from the SNES era) and grid-based movement. When a party member’s turn rolls around, you can move them around the grid before selecting an ability. Positioning plays a key role here, as different abilities have different ranges to them. Attacking enemies from behind is also more effective most of the time. One of the changes the remake introduces is showing the player what an enemy is weak to, as well as what category each of the abilities the player has falls under. This removes a lot of guesswork in battles, and I can’t imagine not having that feature in the game. 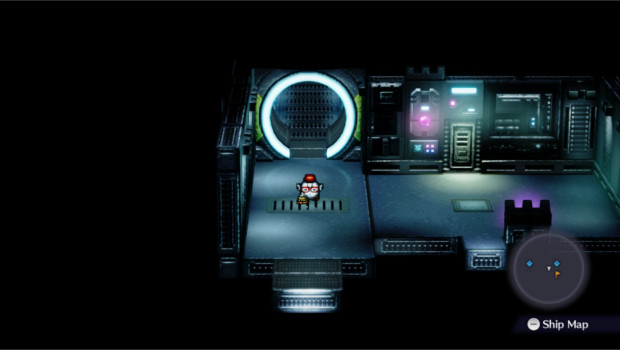 I would not want to do Distant Future without that new map down there.

The problem, however, is that the battle system never really evolves past the initial introduction, so it can be a bit repetitive over the course of the game. Another problem is that the 7 different scenarios you play through aren’t equal in terms of length. Prehistory can take a good 5 hours to get through, while Wild West and Present Day will likely not take any more than an hour to clear. It can make some scenarios feel more of an afterthought as they end before they’re allowed to really develop.

It's a shame too, because this game has some cool concepts that were very ahead of their time in the 90’s. If you’ve played an RPG that you think had some cool and unique idea to it, there’s a decent chance that Live A Live did it first. Wild Arms, Undertale, Golden Sun, that random fan made game in RPG maker that has no battles, but involves you running away from a scary threat? Live A Live did it first. The SNES has its limitations, which this remake mostly stays true to. There are some quality-of-life improvements, such as tips that hint at the more obscure secrets that you’d likely need a guide to find otherwise.

Each of the seven scenarios has a certain gimmick to it. Prehistory features no spoken dialogue, opting to depict its story through caveman-like grunts and animation. Edo Japan offers you a choice between sneaking your way through undetected or killing everyone in the way, and Distant Future forgoes battles for a more sci-fi horror feeling to its setting. Because of this, some scenarios will inevitably be more enjoyable than others. It’s a lot like Kirby Super Star, in that respect. 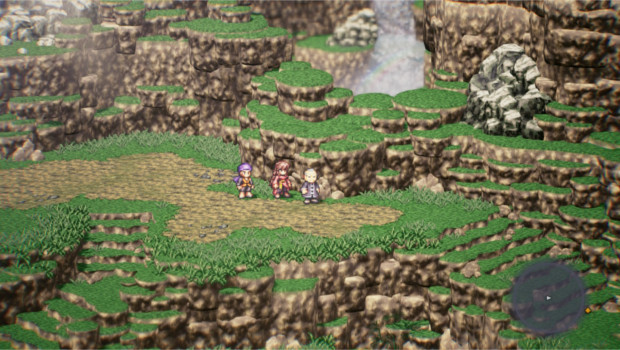 The way to Kung Fu mastery is to look at pretty rainbow screenshots.

And that kind of sums up the problem with Live A Live; the remake has made it look and sound absolutely beautiful, but that can only serve to mask the fact that the actual gameplay has aged not as well as other RPG’s of the era. And at 40 pounds, it can be a tough sell. The person who doesn’t mind buying this at full price is the person who goes into it knowing that they’re buying it for the historical factor behind it. It’s still a unique RPG that has inspired many future games after it, but it’s not the best the SNES has to offer, and in 2022, that becomes even more apparent.

For those RPG fans out there who have been waiting 28 years for this, the HD-2D remake of Live A Live is pretty much a dream game, but for everyone else who might have a glancing interest in what the fuss is all about, temper your expectations. It’s an interesting RPG, but it’s also an antiquated RPG, and no amount of visual upgrade is going to change that.

The visual and audio presentation is near perfect.
The variety of gameplay on offer is impressive.
The new gameplay tips help with some of the more obscure secrets.

The game hasn’t aged as well as other RPGs of the time.
The different scenarios are only barely connected in terms of plot.
40 pounds is a lot to ask for a short SNES RPG like this.

If you’re looking for a traditional RPG plot, you’re not going to find it here. Live A Live isn’t some sweeping epic that focuses on saving the world, the 7 stories are on more of a personal level. If you played Octopath Traveller and didn’t like the story for that reason, then maybe Live A Live isn’t for you.