LostWinds is an entirely new IP from the British games studio Frontier Developments, who got their inspiration from the simple beauty of seeing trees and plants swaying almost choreographically with the wind. Since its revelation several months ago, the title has gained critical acclaim and universal compliments from gamers who have had the pleasure to try out Frontier's gem, and now it's our turn to awaken the winds and save a gorgeous fictional world from certain doom.

The doomed world in question is Mistralis, a peaceful region which was saved from destruction years before the events of the game when the evil spirit of the sun and moon, Balasar, wished to rule Mistralis as a god and overthrow the elemental spirits. The spirits found out about his scheming ways and forged a spirit stone to entomb him forever, and when he tried to fight back, Enril (the wind spirit) trapped him in a furious tornado with the last of her strength, trapping them both in the stone for an eternity. Balasar eventually escaped the stone, shattering it into several pieces and scattering Enril all over Mistralis. The adventure begins when our silent hero, Toku, discovers a shard and awakens Enril's powers.

You are gradually introduced to the game's comfortable and easy to grasp control scheme in the opening area. The Nunchuk's analogue stick is used to move Toku about, with the Z button being used to talk with other people and pick up objects lying about the landscape. The Remote's pointer is used to harness Enril's gusts – simple flicks allow you to interact with most background objects such as trees, whilst a strong gust (activated when the A button is held down and the Remote is slashed like a blade in a certain direction) will propel Toku and various other enemies and objects into the sky. 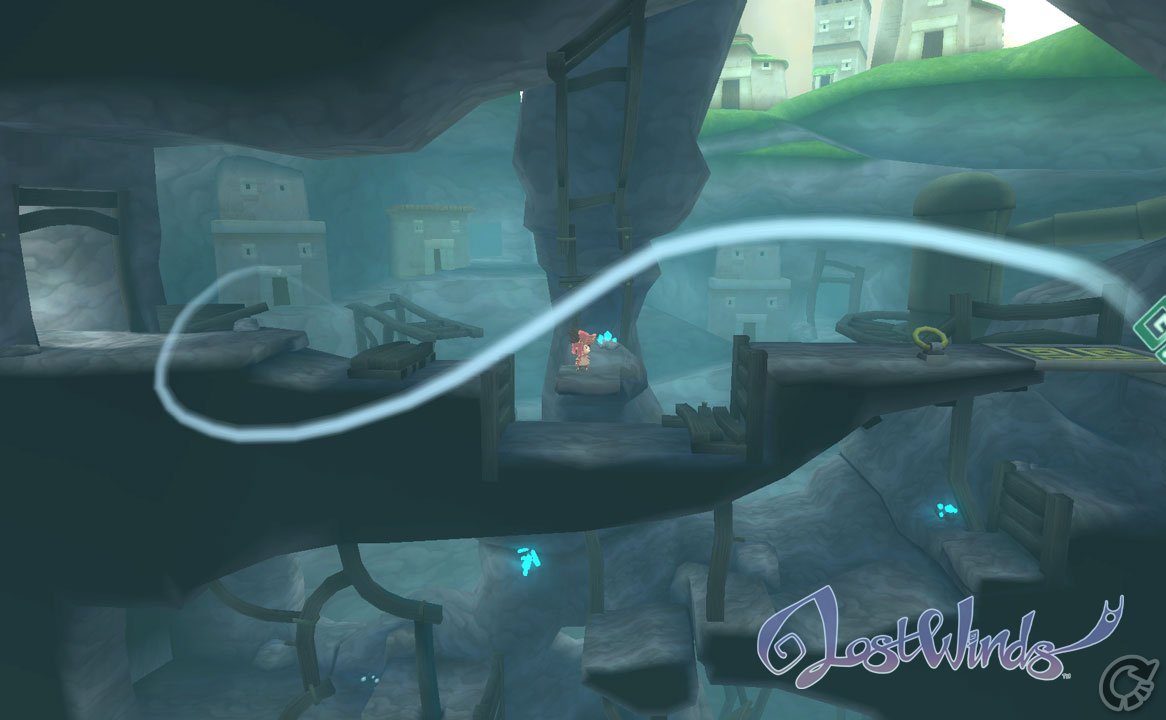 Imagine the wonders Toku and Enril could work for the UK's renewable energy usage.

The amount of ways in which you can interact with the environment, characters and objects is quite astounding and shows the amount of depth, love and care which has been poured into LostWinds in generous quantities. Wind slashes are mainly used to power Toku's jumps and to beat down globular enemies, but as your adventure advances you will no doubt find yourself stopping and playing about with the wind cursor to see how the environment will react. Trees quiver and shed their leaves and blossom when a gentle gale graces their branches, water will leap from a river when Toku glides on by, and you'll even begin to notice subtler touches, such as smoke from a village chimney dispersing in the breeze. Frontier's attention to detail is nothing short of astounding.

As you progress through the game, Enril's innovative wind cursor is upgraded to allow you to execute more special moves than a cyclonic Swiss army knife. Starting with a simple wind slash, you are gradually given more powers such as a more powerful jumping breeze, a slipstream to create paths for your character to follow whilst flying, and eventually a powerful wind vortex to trap enemies and objects in mid-air suspension. Your gradually increasing knowledge and ability allow you to solve the different puzzles within the game world, such as fanning a flame with your wind cursor which can then be used to torch a rather flammable obstacle. However, LostWinds' many puzzles are lacking in variety and challenge. By the end of the game you'll find that most puzzles have been recycled so many times that they look like retrospectives for EA's annual sports titles. The game had a lot of potential for innovative and fresh puzzles, which makes this feel like a wasted opportunity. 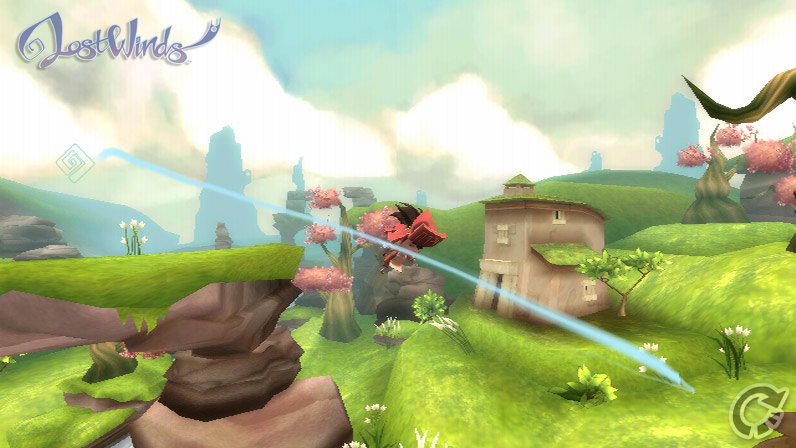 If you think you can do something with the wind, then the likelihood is that you can.

The graphics in LostWinds are quite simply gorgeous. If you can imagine a living, breathing fairy tale, that's LostWinds. The game employs a kind of realistic cel-shading, making the world look artistically beautiful yet believable. The wind controls must be praised yet again for the part they play in the title's graphics, as they help to raise your attention to how much detail has been integrated into them (everything reacts differently with different graphical responses such as blossom falling from trees in the wind and plants and mushrooms swaying with the breeze).

LostWinds' musical score is also noteworthy. The main theme and the short, sweet tunes throughout the adventure are soothing, relaxing melodies which will make you want to pick up your Wii Remote and Nunchuk if you need to wind down after a tough day. The lovely flute melodies are brief but reminiscent of Zelda, and we're literally drooling at the thought of a larger scale LostWinds adventure with more complete and expanded scores.

The simplicity and the repetitiveness of the puzzles means that you will be able to breeze through the game, which follows a fairly linear path (you can't wander off to explore, which is slightly disappointing even though this is effectively a 2D platformer). Though this would normally be a major complaint, any nay-sayers should be reminded that LostWinds costs £7, which is considerably less than you'd pay for a full retail title which would offer the same amount of longevity in single-player. Frontier serve up quality in giant-sized proportions compressed into a bite-size adventure which you won't regret downloading.

In terms of longevity, LostWinds is no hurricane, but its quality is as refreshing as a cool breeze on a hot summer's day. Simply magical.