Since MadWorld was announced just shy of a year ago it has been the subject of both intense praise and judgemental criticism. In August Mediawatch-uk and The Daily Mail launched a pre-emptive campaign against the game but thankfully the game didn’t suffer the same fate as Manhunt 2. However, in spite of any controversy the game may receive it still needs to be enjoyable to play and MadWorld does this in spades.

The game’s striking black and white visuals are reminiscent of Sin City and they work really well in the game. The blood, and there is a lot of it, is the only colour in the game and after some time seeing red-coloured floors almost feels like an achievement in itself. MadWorld’s striking visuals ultimately work in the game’s favour as they add to the ‘blood is good’ notion underlying the whole game.

MadWorld sees Jack, “just Jack” as he says at the start, purposely inserting himself in a Death Watch game. Organisers of the Death Watch game have isolated Varrigan City for the purpose of this last-man-standing event. While the game’s plot initially seems simplistic it takes several surprise twists and developments through the cut scenes, which are displayed in a comic book style reminiscent of XIII. Ultimately I found myself surprised by the depths they take the narrative to. It’s not Plato but nor is it the simple hack-and-slash that it appears to be at first glance. 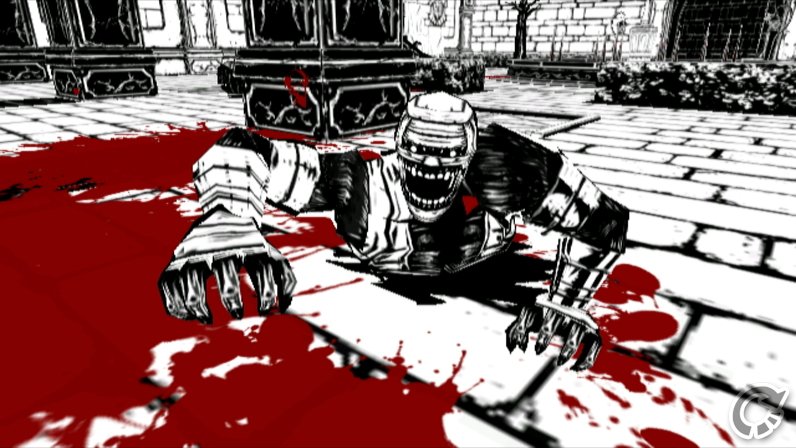 The game is split into four areas, in each of which there are three separate levels. Other than occasional levels where there is just a boss each level will take anywhere between fifteen and thirty minutes to play. Typical levels require you to score certain amount of points to unlock things in the level, from power-ups to weapons and ultimately boss challenges. Points are obtained through killing, and the more violent and cruel the killing the more points you get. For instance, if you simply beat up someone to death you won’t get many points. If you stick five signposts through their head, a barrel over the top of them and then repeatedly impale him on a spike you’ll be well on your way to success.

In addition to the points-mean-prizes elements of killing each level contains two other elements; a Death Watch Challenge and a boss battle. The Death Watch Challenges are side games in which you are asked to kill enemies in specific ways. The Black Barron, who is an amusing amalgamation of many media representation of a pimp, introduces each game to the player but is ultimately the example case thanks to his scantily-clad-in-spikes assistant who really doesn’t seem to like him. This opening explanation starts off humorous but becomes a bit predictable after a while unfortunately, loosing its initial comedy. The games themselves range from entertaining to frustrating. While I won’t give away many details you will be asked to play golf with people’s heads, throw them into moving trains and shove a bottle of champagne in their mouth and watch as they blast off. However, toward the end of the game many of the challenges become repeated and this is one of the game’s flaws.

The bosses’ difficulty seems uneven at times, some earlier bosses being more difficult than the ones later on. Each boss contains basic elements of strategic defence and attack, and certain ‘waggle’ elements reminiscent of Shenmue’s Quick Time Events as if done successfully you take a lot of life off them, in a violent manner of course, but if you miss one action you get hit instead.

Greg Proops (Whose Line Is It Anyway?) and John DiMaggio (the voice of Bender in Futurama) provide the commentary during the game which contains most of the game’s crude humour and in-jokes (“Why don’t the other contestants pick up the health? It’s like Jack is the only one who can see it.”). While the commentary is truly one of the game’s highlights it can often get drowned out due to the action taking place and certain lines are repeated quite regularly which becomes tedious. Even so, the commentary is such a highlight it could be released as its own separate album. Speaking of soundtracks, those who have pre-ordered the game from HMV and gotten the game’s soundtrack prepare for a treat. The rock music used on the soundtrack fits perfectly with the action on screen and adds another great element to the game.

There are two motorbike levels during the game that are bland compared to the normal action. As you race along you come across enemies on motorbikes and you can either slash to the right with your chainsaw or grab them if they’re on your left. However, the enemies on the left are often on the left of their bikes, so you have to wait for them to hop over to the correct side so you can kill them. While the motorbike is implemented well in a Death Watch challenge and a boss battle the levels themselves are lacklustre.

The game has its flaws of course and while some of them are frustrating it doesn’t affect the game too much. The biggest issues I had were the fact you can lock onto enemies, but then you become stuck on them and it becomes difficult to detach yourself from them. Also during the game your sponsor provides hints which pause the action but go on for far too long considering its only ever a sentence or two of information. As has been experienced in other Wii games there are times when the Wii remote doesn’t pick up what you are doing correctly and while it may be my fault sometimes at others it seems stubbornly unresponsive. 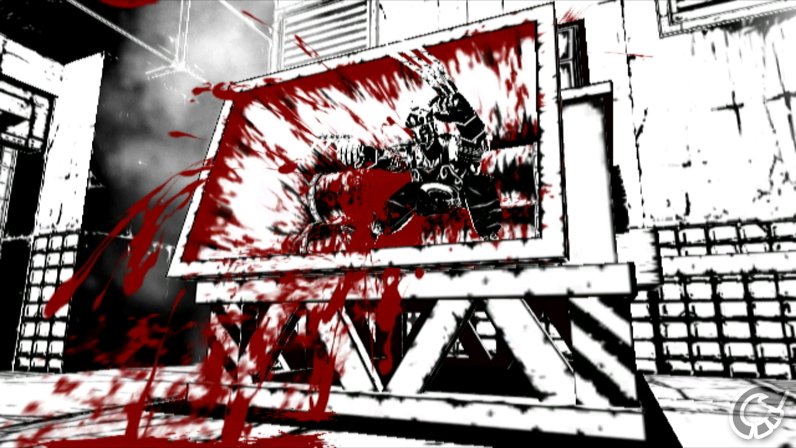 In total the game’s main storyline will take about three hours to complete, although it is a very enjoyable three hours. There are levels that are quite difficult so thankfully you won’t breeze through it. After each level is completed you can go back and you will receive another challenge to complete (such as finish the level without dying) and of course there is the joy in racking up points. Once you complete the main story you can change to a harder difficulty setting, however at the same time you are given a more powerful weapon and as such the two things negate each other, although using the more powerful weapon is optional. However, do not be discouraged by the length as the game does offer a great deal of replayability and I can imagine myself going back time and time again even if it is just for stress relief.

MadWorld does feature multiplayer but unfortunately it is just the Death Watch Challenges. It would have been fun to go through the main game in a co-operative mode but unfortunately Platinum Games did not include this feature. However, the game itself is quite entertaining to watch so if you have friends around you can always take turns with the levels and watch as your friends go on a slaughtering spree.

Overall MadWorld is recommended for anyone who is looking for something a bit more ‘adult’ on the Wii and who enjoys a no-holds-barred bloodbath. While it has its flaws they are relatively minor, and will hopefully get ironed out if there is ever a sequel. Platinum Games tried to create something unlike anything else on the Wii and succeeded, to the delight of many Wii gamers.

Highly entertaining and violently satisfying; perfect for anyone who is looking for some variety on the Wii.