Back when we reviewed Mario Kart 8 for the Wii U we described it as “pitch-perfect”, but not without some faults. Battle Mode being one of the most obvious as Nintendo for some reason decided to use whole open tracks that led to empty battles, a mistake so patent it seems strange they went ahead with it.

There were some other minor issues, such as the map being relegated to the GamePad that was later fixed with an update, but we had very little problems with Mario Kart 8 and it remains one of the most beloved instalments of the popular series. It is no wonder that Nintendo is looking to capitalise on the game’s critical acclaim by releasing Mario Kart 8 Deluxe on the Switch as it will undoubtedly appeal to ardent fans and anyone that missed out on the Wii U.

The engine under the hood (forgive me) is very much the same as Mario Kart 8, so we’ll talk little about how it plays in this review, but you can check out our previous one to see what we said at the time. 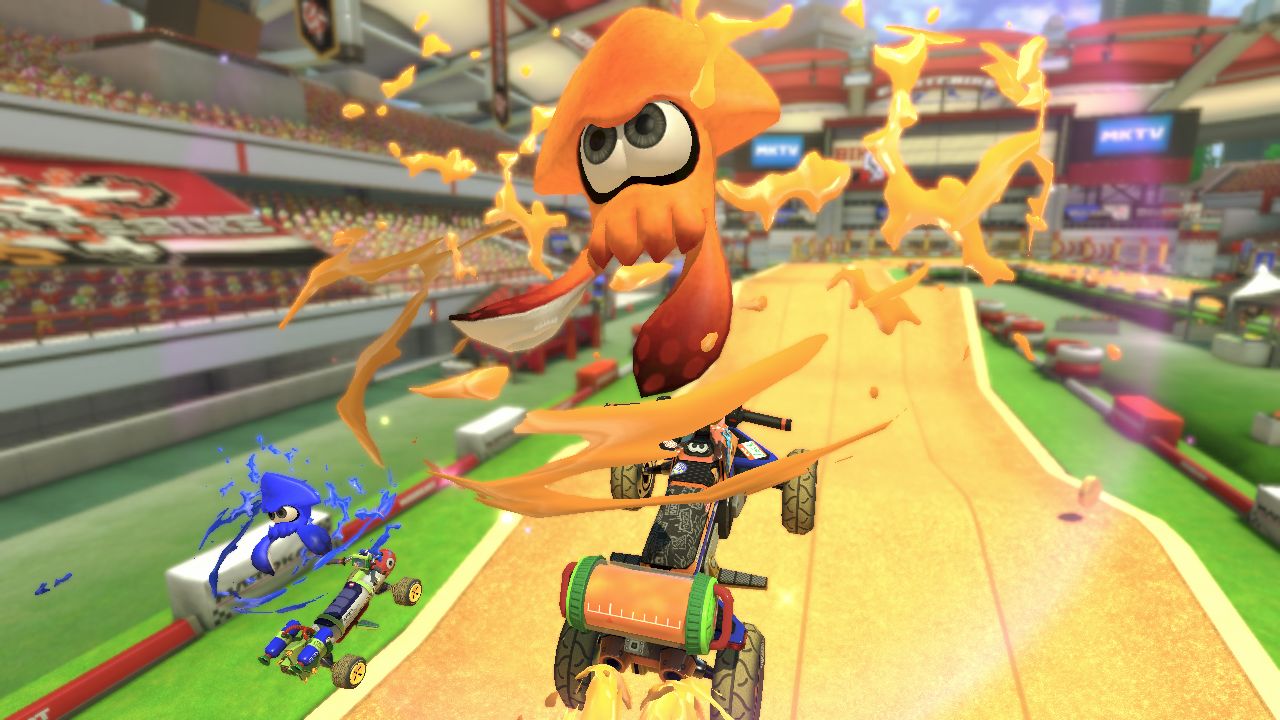 For anyone that doesn’t know, Mario Kart 8 Deluxe contains the entire contents of Mario Kart 8 and the two DLC packs that added four new cups and racers as well as a handful of extras. Inkling Boy and Inkling Girl now join the roster (making my housemate irately asked why Kirby is being ignored in favour of these Johnny-come-latelies) and a new Splatoon-based battle map is available (but you can’t race in it).  King Boo, Dry Bones, Bowser Jr. and Gold Mario also join the roster, although Gold Mario is only available after you've earned it.

The other updates are minor tweaks, such as the new ‘assisted steering’ which makes it easier to stay on the track. Allowing this to be turned on for individual players helps to level the playing field, meaning young or inexperienced players can join in without feeling like they’re being left behind. However, in my experience of trying it (for review purposes, obviously) I found it was a mixed blessing. It can be useful when you’re squeezing through a tight spot between some moving in-world vehicles and the scenery as it does the work for you, but it also steers you away from some shortcuts that require you to leap off the edge of the track. I also found the odd occasion where it would shove me along when I was nowhere near an edge, but they were rare.

You can now carry two items, but unlike the criminally overlooked Mario Kart Double Dash!! that first introduced this, you can’t switch between them. Speaking of items, the feather makes a return in Battle Mode only, while a new item-stealing Boo weapon is there to annoy people clinging on to that red shell just in case.

There is one thing missing from Mario Kart 8 Deluxe that was in the Wii U original - using the GamePad as a horn. We’ll give you a minute to mourn this terrible loss.

Done? Good. You probably spent more time doing that than Nintendo did thinking about the Battle Mode in the Wii U version, which brings us nicely to... 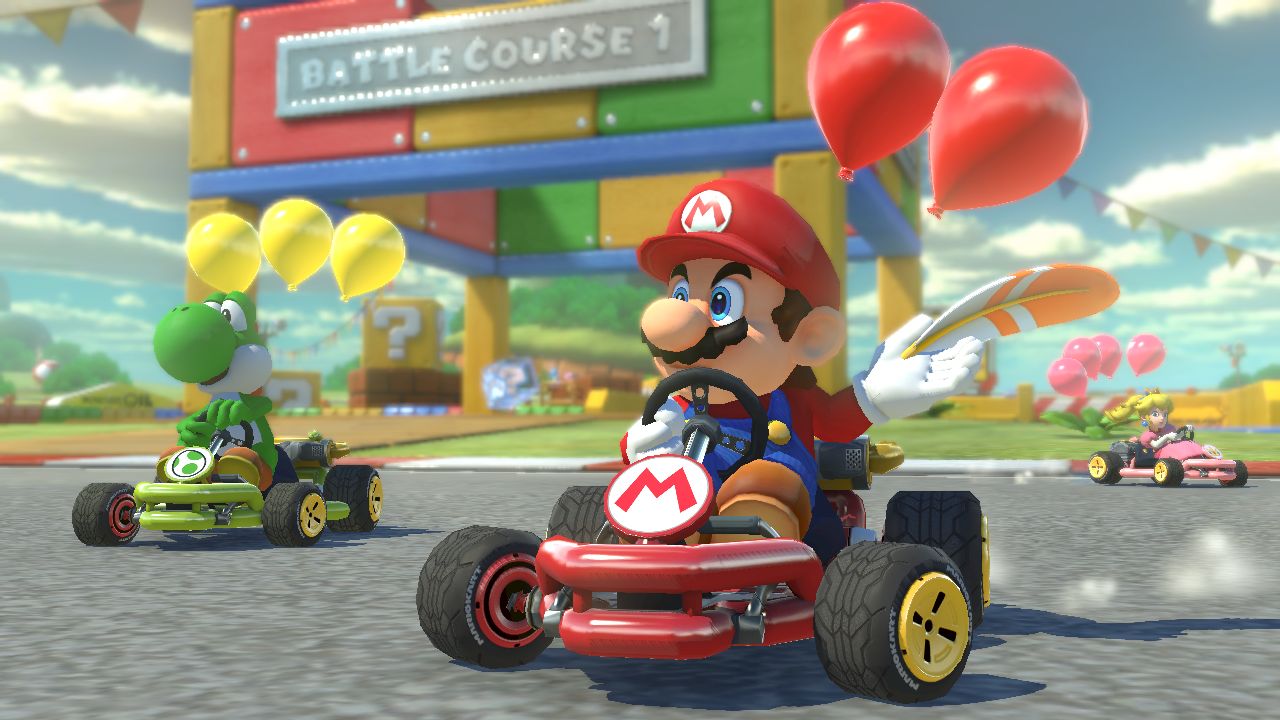 As I mentioned earlier, the Wii U Battle Mode was barely worth bothering with and left a sour note on an otherwise great game. However, Nintendo really has fleshed it out by adding new maps and modes and turned it into something that provides a fun distraction from racing. There are now five modes and eight maps (including some retro ones). The newest mode is renegade Roundup, which splits you into two teams - one must round-up the ‘renegades’ while the others try and escape from their lockup. It took me a little while to figure out what was going on, but it's an interesting new minigame in its own right.

Elsewhere, Shine Thief is another callback to Double Dash!! (it needs the exclamation marks) whereby you compete in keeping hold of the Shine Get for the longest time while Bob-Omb Blast also returns in all its explosive mayhem.

While we know the Switch is built around being able to take the console on the go with you it's amazing to be able to take Mario Kart 8 Deluxe with you and play anywhere.  Whether its because the console is still new or because we played Mario Kart 8 restricted to a limited area I'm not sure, but being able to play a game as impressive, both graphically and technologically, anywhere you are is in itself a big selling point.  A handheld Mario Kart that hits 60fps on the go with 42 characters and 48 maps is something that would have seemed like a crazy dream only a few years ago.

Some of the more minor issues raised in the last review remain. There’s no lap times in the Grand Prix mode, which I personally find useful for knowing exactly how close others were to me as I crossed the finish line (particularly when they just pip it), and no victory screen so the end of a GP feels a bit limp. These are, of course, minor things that are vastly overshadowed by the depth of content and excellent gameplay.

Nintendo's quietness about the Switch's online services may come back to bite them later on.  Mario Kart 8 was one of the Wii U's most popular online games and we don't doubt Deluxe will be the same, but in a few months time we'll have to start paying for it.  We still don't know when, how much and how the phone-based chat service will work.  Nintendo does give a warning that online will cost down the line, but launching a game with such a strong online aspect without being upfront about what to expect a few months in to its life may be an issue that comes back later on.

Mario Kart 8 Deluxe will seem to some expensive if they’ve already paid for Mario Kart 8 and the DLC on the Wii U, but anyone that loves the series or anyone that hasn’t played this version shouldn’t think twice. It’s a great social game with a decent (although at the time of reviewing pre-release, quiet) online service that still manages to be a hell of a lot of fun.

Whether many people will get the chance to get together with seven other people out in the real world for spontaneous gameplay sessions like the adverts suggest remains to be seen, but this game is a hell of a great experience regardless of how many people are playing.

Editor note: an early version of this review mistakenly listed the overall score as 8.

The definitive Mario Kart experience gets even better and the Switch's form-factor makes it even better. This will undoubtedly be a multiplayer mainstay for years due to its solid gameplay and fun.

Little new to justify repeat purchase unless you're a huge fan

...being able to play a game as impressive, both graphically and technologically, anywhere you are is in itself a big selling point