This game has had a somewhat troubled past. Nintendo fans were up in arms when the game was first leaked, with many disgusted the Rabbid characters were being allowed to cross over into the Mario Universe. E3 2017 rolled around and the game was finally shown off. It picked up many best of E3 awards from various outlets and it seemed to have won over those who had dismissed the game. Does the game live up to the praise it was given at E3 or were those who were dubious about the game right to be negative about its release?

The story of the game isn't going to win any awards but it does a nice job of setting the game up. It begins with someone inventing a machine that can merge two things together. It looks to be quite harmless but once the Rabbis get their hands on it then all hell breaks loose. Standard stuff for those mischievous critters. The Rabbids and the Mushroom Kingdom end up merging into one and that's where the adventure begins.

Once the cutscenes are over, it's time for you team of 3 to get to grips with how the game plays. The game does a great job of showing you how to play the game but never feels like it is overwhelming you with information. The developers have managed to strike a nice balance of giving you tutorials but also letting you just get on with the game. Whenever a new mechanic is introduced it is done so very quickly. This is refreshing to see because far too many games tend to get bogged down with gameplay details at the start of the game and by the end of it players haven't a clue what they've just been told. This isn't the case with this game. 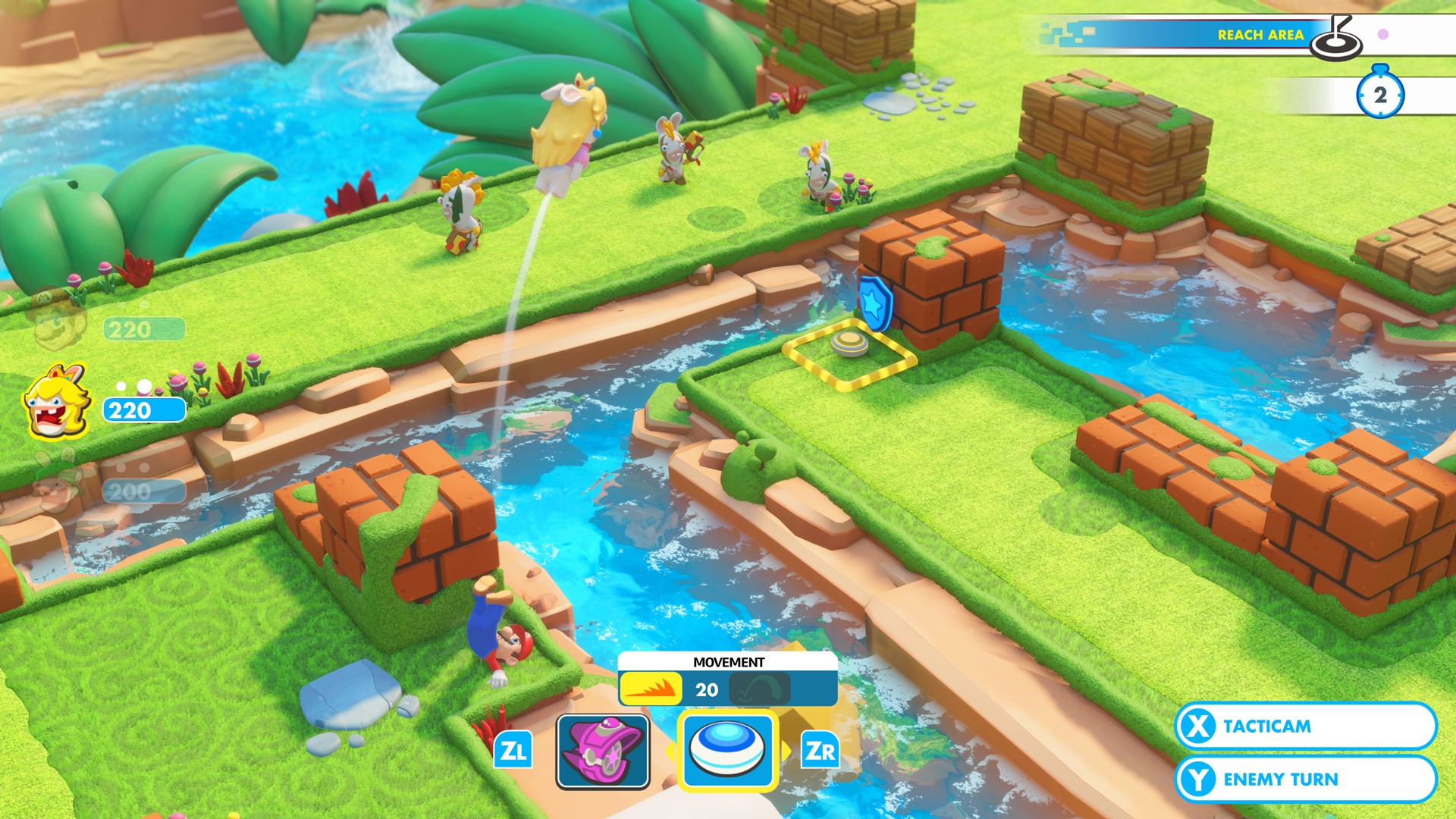 Moving and the positioning of your team around the map is a big feature of the game and could make or break the battle. At the start of the game most of the enemies can be tackled head on and without issue but by the end of the game you will learn that you need to flank around them, skid into them and bounce on them, all in effort to whittle down as much health points as possible per move.

Character and weapon selection is another aspect that needs to be considered when entering into a battle. For example, if a map has a lot of high points then Luigi would be the best option. His weapon of choice is a sniper rifle, so getting him to stand above enemies is the ideal solution. Is there a map with a lot of enemies that could do a lot of damage? Then Rabbid Peach is a good option due to her healing capabilities, something which comes in really handy in the late game battles. It's these types of things that stop the game from becoming stale. You eventually get access to a lot of different characters, each with their own moves and weapon sets. Figuring out a team that works best for your own play style is half of the fun and when you manage to get one that works perfectly ( I was using Mario, Rabbid Peach and Luigi) the effects on the enemy when your characters link up moves can be devastating.

New weapons can be found/unlocked and bought throughout the game. Most offer a nice damage upgrade and others will give the option of status attacks. These allow you to do things like blind an enemy so they can't use their weapons, stick them to the ground so they can't move, or make them bounce of walls in the hope that you can knock them off the stage for extra damage. These effects only happen if a critical hit occurs, so don't go relying on them in battle but think of them as a nice bonus.

Each character has their own skills. Some of these are available for everyone but most of them are unique to each of them. You get skill points for doing various things in the game ( treasure chests, challenges, story battles ) and these are then used to essentially level your character up. It's up to the player to decide how these get distributed. Do you give your character more HP or do you give one of your attack moves an extra boost in power? What's great about this is that if a setup isn't working for you, and you do change your mind, then you can simply empty all of the skill slots and reassign everything. There's no need to fear about making a wrong decision and wasting a slot. 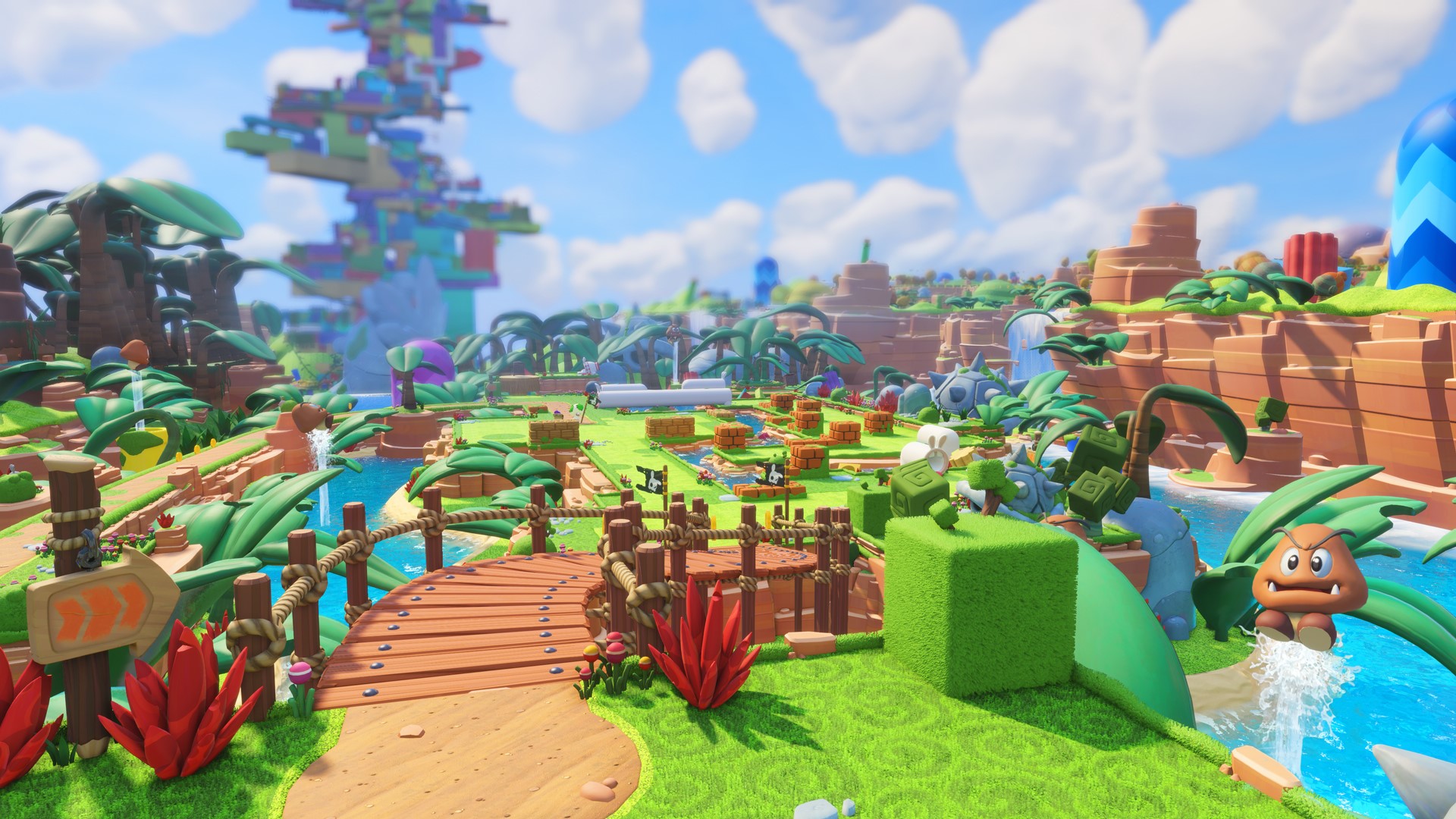 The humour in the game is fantastic. Beep-O provides a few unintentional laughs, purely just for the way he talks to others. There are a few times where he has a back and forth with Toad and Toadette and by the end of these encounters he really seems fed up and starts to lose his head with them. The Rabbids themselves are often acting like idiots throughout the game and, depending on your sense of humour, you will more than likely have a good laugh at their expense.

Speaking of humour, I was pleasantly shocked by some of the jokes that made into into the final game. This is a game that features Nintendo's mascot, so I was very surprised by what made it through. There are a few toilet jokes, suggestive themes and even instances where it looks like Beep-O is swearing. Obviously you don't hear or see the words but they cover them up in quite a humourous manner.

Ever since Grant Kirkhope announced that he would be doing the music for the game I have been excited to listen to what he would have on offer for a Mario title. Needless to say he doesn't disappoint. Those of us who grew up playing the Banjo games will certainly have a sense of familiarity when going through the various worlds. The colourful tunes that Kirkhope has composed in past games are back and just a good as ever. His take on certain Nintendo jingles are a joy to listen to and there is a nice subtle use of a certain Donkey Kong tune that fans should get a kick out of.

Visually the game looks amazing. Ubisoft have done a fantastic job of capturing the Mario artstyle and, at times, making it their own. The worlds are all filled with character. Even the worlds that have a more darker tone still manage to look great and give off that Nintendo/Disney style charm. It's obvious that a lot of care and attention has been poured into the game and it really shows.

The character designs for some of the Rabbids are really something. Whenever a new unit is introduced you get a quick splash screen showing them who they are. You will see them dressed up as all sorts of things, ranging from piranha plants to giants with coffin son their backs. The boss are equally as well designed, with the third boss being a personal favourite of mine. The Rabbids have always had a bit of character to them but with this game there is an extra layer added to them and they also seem less over the top, which will be a welcome thing for many people.

For those who are worried about the amount of content or length of the game, they have nothing to fear. If you choose to just concentrate on the main story, without looking for an treasures or doing any challenges, then you are probably looking at around 20 hours game time. If you are a trying to get 100%, then this time will be greatly increased. I have spent around 30 hours on the game and have still got a lot of things to do. 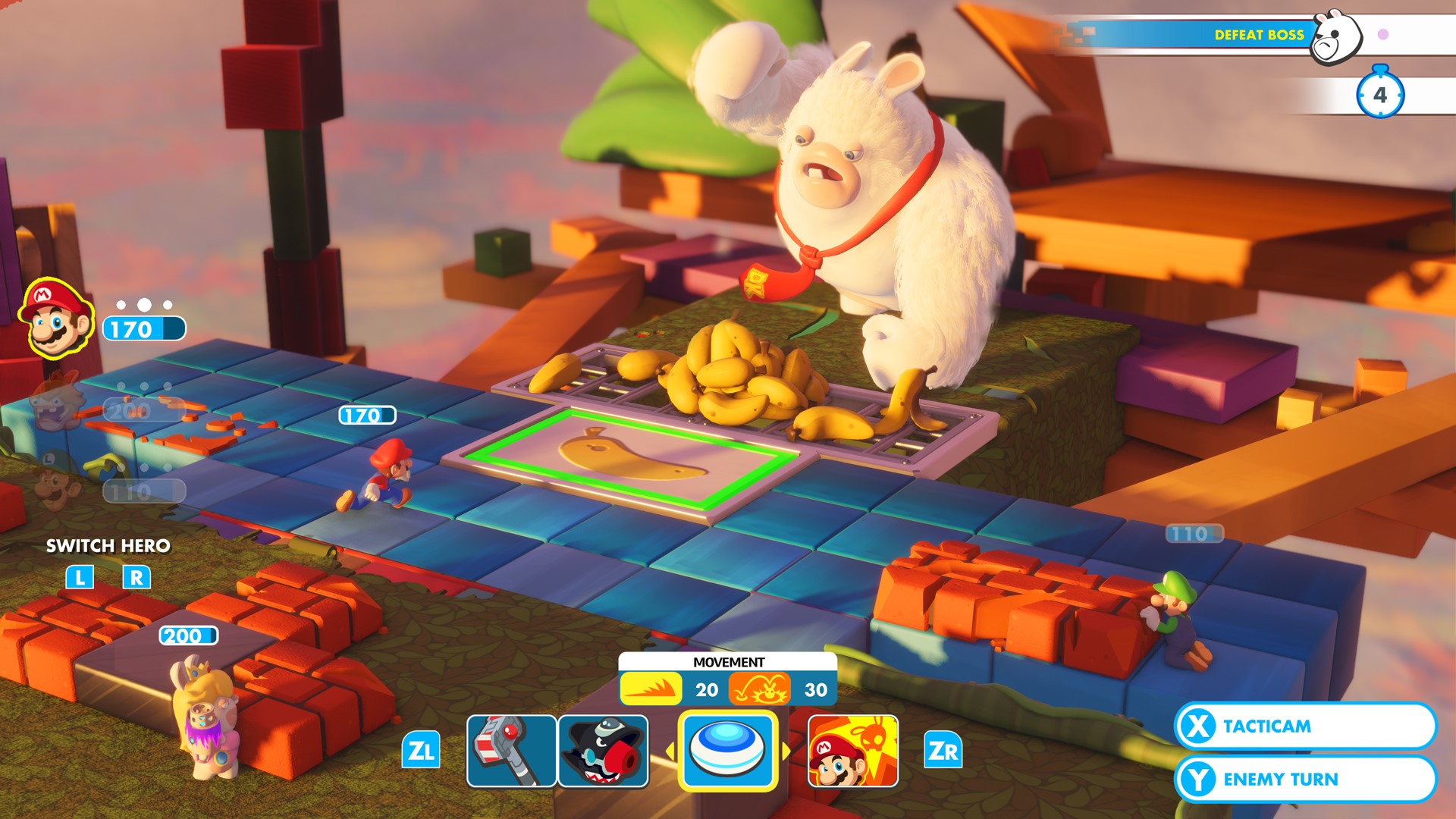 So what is there to do? There is the main story line. This consists of 4 worlds that are split up into 8 levels, a boss fight and a secret stage. Each of these levels can contain inbetween 1-3 stages. That's already a hefty amount of content right there. You then get ranked on how you perform on each of these stages. To get the best rank you will need to keep every member of your team alive and finish the stage within a set amount of turns. Doing this will get you a gold trophy and a bunch of coins to spend on weaponry.

Next up are the challenges. After completing a world you will unlock 10 challenges. These start off as very easy but eventually they get really difficult and you need to really be at the top of your game to complete them. Luckily there is no ranking for these, so you don't need to restart if a team member gets defeated in battle. For doing these challenges you will gain some more coins and skill points.

Finally, there are around 40 hidden treasure chests scattered across each world. These contain things like artwork, skill points and new weapons. Most of these chests cannot be picked up until you come back to the world after completing it. This is because you gain a new move to use on the overworld every time you finish a world. The move you need is the one you will obtain from defeat that worlds boss. This is where the main exploration aspect comes into play. Some of the overwolrd maps are quite large and have multiple paths, so finding your way around can take some time.

Despite the game having a colourful look, it can be quite challenging at times, both in the main game and with the various challenges that follow. While I never used it, the game does offer an easy option for players. This increases their teams health, which should help them survive a little better in battle. It's not just the battle but also the overworld levels themselves that can cause difficulty issues. There are many moving block puzzles and some of them can be real head scratchers. I think a lot of people will be surprised by the difficulty of the game and I imagine a lot of young children will struggle to get to grips with it, especially late on.

Ubisoft have managed to deliver something special here. Everyone at Ubisoft and Nintendo that were involved in making this game should be proud of the end product that is on offer here. The game received a lot of backlash when the leaks happened earlier in the year, so it's been great to see the game come out and be as good as it is. It teaches a valuable lesson that people shouldn’t judge a game based on rumors or leaks and instead should wait until the game has had a proper unveiling.

In a time where most Switch games are either small indie titles or multiplayer focused games, this comes as a breath of fresh air and adds a much needed meaty single player exclusive to the Switch's library. If you own a Switch then this is a must have title for the console.

Speaking of humour, I was pleasantly shocked by some of the jokes that made into into the final game...there are a few toilet jokes, suggestive themes and even instances where it looks like Beep-O is swearing.