It had been a time-honoured tradition since 2008 that every two years Nintendo gamers would be treated to an eclectic mix of normal and insane games under the guise of The Olympic Games but our world came crashing down when, for the first time in 10 years, the 2018 games passed Mario and Sonic by. But now they’re back and raring to go for a bout in their homeland of Japan! Has the 4-year hiatus given our unlikely duo a new lease of life or is this series waning like the many olympic buildings in Rio?

A quick peruse around the menus and a light dabble in the games proves that Mario and Sonic have still got some sporting flair but upon first sight, they don’t seem to have many new skills, it’s only when you look a little deeper that you find a more streamlined experience.

The waggle-fest (or button-fest, we’ll get to that) of the 100m sprint returns, along with Olympic and series classics such as table tennis and swimming which are pretty much the same as before but with slight gameplay and control changes for the better. For example, previous games of table tennis would task you with moving both your character and style of swing with the left stick, whereas now the character moves automatically giving you complete control over the way you return the ball.

Most of the more robust and lengthier games also make a triumphant return, such as football and rugby sevens, and while these don’t seem to have had quite the overhaul as some of the aforementioned ones, it’s because they don’t need it. They’re just as fun as back in Rio, with slight changes to celebration animations and goal kicks to really speed up an already frantic set of games. 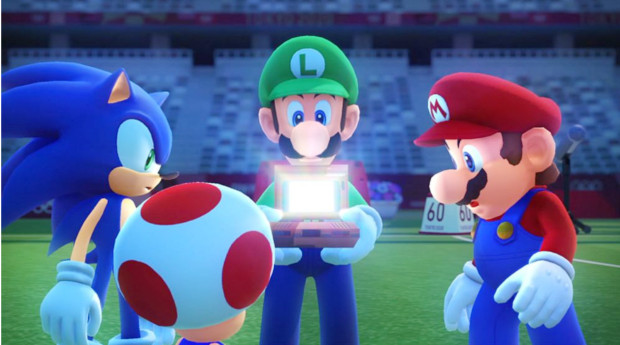 Luigi showing off another one of Professor E. Gadd's bootleg consoles?

There’s a selection of different control methods to cater to every taste, with each game now supporting traditional button controls - great for gaming on the go but also the best way to play single player as it provides the most accurate and enjoyable way to play. Optional motion controls make a return but they seem much better suited to fun local multiplayer games with your friends as they level the playing field but also wield less accurate results when going for high scores.

Alas, SEGA have had 4 years to really breathe new life into the series and we didn’t race to the shops and purchase another instalment for the same old game with Tokyo plastered over the London and Rio logos – and thankfully that’s not what we get as when you start to scratch below the surface, this seemingly familiar game is one of the freshest titles in the series since our Wii U days at Sochi, for better and worse.

New games karate, skateboarding and fencing are a joy to play but it’s the other modes here that really bring this series into 2020. SEGA’s Olympic Games have dipped their toe in online over the years through leaderboards and a very select few online sports in Rio, but they finally go all out this time allowing you to play any and every sport available on the game in free-play, ranked or friend matches. Now you can finally pile on top of your friends online in Rugby Sevens – hurrah! Not only that, but the aforementioned toe-dipping is back as you’ll still be able to upload and compare your top times in worldwide and local leaderboards. 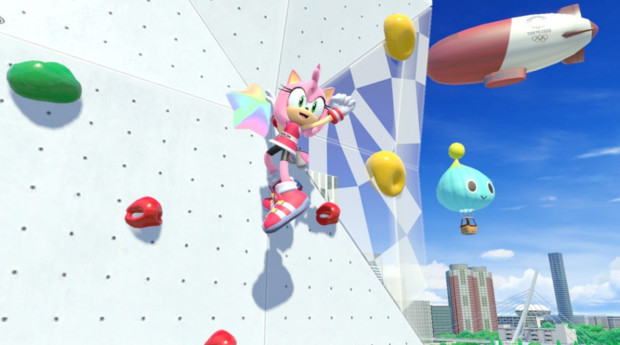 Amy Rose there, stopping at nothing to scope out Sonic.

The most enjoyable and in-depth new addition is story mode, providing an often funny and always enjoyable romp through the past and present of Tokyo. Mario, Bowser, Sonic and Eggman get sucked up into an old videogame console created by Eggman himself. Inside the console Mario and Sonic return to their classic 8-bit (and 16-bit) selves and realise they’re not in 2020, but have gone back in time to the 1964 Tokyo Olympic Games.

Freeze-frame and transition to Luigi and Tails, the better half of the hedgehog and plumber duo, who are still in the ‘real’ 2020 full 3D world of Tokyo, staring at this game system that just gobbled up their biggest heroes and biggest foes. It’s soon revealed by series deep-cut Eggman-Nega (PSP Sonic fans rejoice!) that the only way to return those egg-heads to the real world is by charging a magic battery (begrudgingly provided by Magikoopa) which gains power by the excitement and cheers of Olympic audiences. Meanwhile inside the 8-bit world, Mario and Sonic are told that only the power of their gold medals can help them return to 2020.

As convoluted as the main story may be in getting you to play Olympic Games, it’s actually an incredibly enjoyable single-player mode and the best in the entire series. In both era’s you’ll be traversing Tokyo, visiting famous locations such as Tokyo Tower, the Sky Tree and Shibuya Crossing. The NES sections play like a classic SNES RPG as you traverse the landscape of Tokyo collecting gold medals, swapping out dramatic enemy encounters of old for Olympic Games. 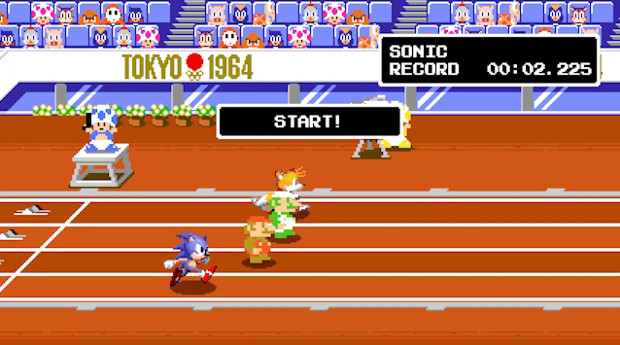 Is this Track and Field? Nope, but can you imagine if this had been?

The NES section of the story also has exclusive Olympic Games to play and they’re surprisingly some of the most enjoyable. Beach Volleyball has the best controls and depth of the entire series and the old 1960’s style commentator just adds to the charm.

Story-Mode has exclusive games too, such as classic 16-bit Sonic outrunning a bullet train in an obstacle course, or Tails in 2020 climbing Tokyo Tower to retrieve event tickets like a much less terrifying King Kong. There’s a bunch of these style of games that break up the usual gameplay and tie the story together, a favourite of mine being a section where you’re surrounded by Shy Guy and have to beat them all up to escape, with the help of /fireworks/ to take out multiple Guys at once.

Once you’ve successfully beaten these story-driven mini-games, they’ll be unlocked on the main menu for normal play. And that’s not the only thing you’ll be unlocking as Story mode has a bunch of info cards scattered around the land, providing interesting facts and trivia on the Olympics and Mario & Sonic series. Most importantly though, new characters outside of the usual suspects can be unlocked in Story mode, with an exclusive one for each event. 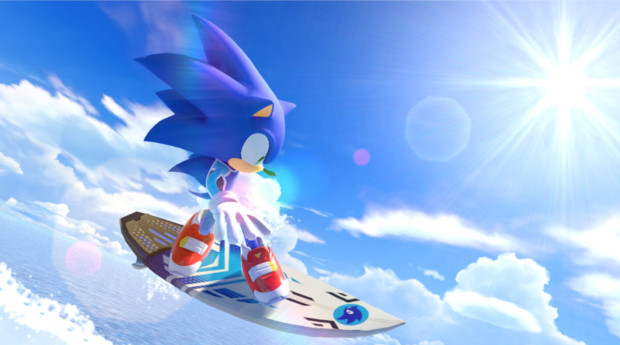 This isn't an intro sequence to a new Sonic Adventure game but we can dream.

Lesser known but beloved characters such as Wendy, Rouge and Zavoc will be unlocked on the main menu to play in their respective events when you have beaten them in story-mode, giving you even more incentive to play the already enjoyable and often times funny Paper Mario style story.

But what SEGA giveth, SEGA taketh away and it seems this title is fresh not only for its new additions but also for its lack of baggage. Previous titles had built up a hearty collection of Mii outfits and fantastic music to unlock in the form of remixes and classic songs from the Mario and Sonic series history. Shockingly, all of this is gone. It’s not just a case of no new additions but all of the great remixes from London, Sochi and Rio have been scrapped.

This could be seen as SEGA trimming the fat the series had accumulated over the years and focusing on the important aspects of the title, and it will no doubt play little in dissuading the casual player on picking up this new-instalment but series die-hards such as myself will find it a hard pill to swallow, as the gradual additions to already great remixes game after game had resulted in the Mario & Sonic series being a surprising runner-up to Smash Bros for providing a nostalgic trip down videogame memory lane. 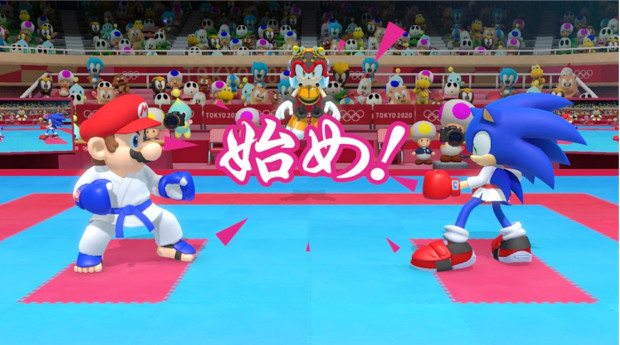 Mario & Sonic settle things once and for all in a fight to the dea... Oh no my mistake, it's just Karate.

Despite the loss of classic music, the game features fantastic new original music with the 2020 games having a Sonic/Super Monkey Ball feel while the 1964 Olympics story mode has music similar to modern retro-inspired games such as Stardew Valley. Graphically the game holds up too - there’s nothing ground-breaking here as it seems to re-use a lot of character assets from Rio but as that game looked great in 2016, it places this squarely in the Mario Kart 8 realm of high-poly, clean HD goodness.

Meanwhile the ‘1964’ sections look absolutely beautiful and after a short while you’ll forget you’re not playing a beloved classic Olympic title from your youth as everything feels so authentic.

Between traversing the famous locations of Japan on the story mode map, having a blast on new and exciting events such as surfing and skateboarding and having a retro-inspired blast on the 8-bit stages, this entry in the series is the freshest in years.

With full online play, 2-player motion control out of the box thanks to Switch joy-cons, full classic, Pro and GameCube controller support and local wireless play, this is the easiest title yet to set-up for a few rounds against your friends. Add to that the magical setting of Tokyo, rich display of characters and most enjoyable single-player mode the series has seen - this is one of the best Mario (and Sonic!) Sports titles you can get this side of the millennium.

Between traversing the famous locations of Japan on the story mode map, having a blast on new and exciting events such as surfing and skateboarding and having a retro-inspired blast on the 8-bit stages, this entry in the series is the freshest in years.