The Marvel franchise is everywhere these days. It seems like every other month, there’s another movie about another superhero about to release. It’s no surprise though; they have a huge, dedicated fanbase that clearly enjoys what gets put out. So, a game that lets people play as a whole host of characters spanning a number of series is a no-brainer. That amount of fanservice is bound to help with reviews as well.

Shame that I’m reviewing it, really.

Marvel Ultimate Alliance 3: The Black Order is a game aimed at Marvel fans. I do not care for Marvel stuff; I’ve never really been a superhero sort of nerd. My knowledge of it is insultingly basic at best, I mean, I’ve heard of Spider Man, he shoots webs and stuff. You could argue that makes me ill-equipped to review, but I see it as a unique opportunity to provide a review that truly focuses on whether the game holds up, with no chance of me getting distracted by the fact that I can play as Luke Cage or whatever.

Still, I should start with the plot. It opens up with um, some guys. They’re from space, I think? One of them is a Raccoon, except he’s not actually a Raccoon? I’m confused already. Anyway, they discover an abandoned ship and decide to loot it for treasure, but they discover that another guy was waiting there for a bad guy to show up. You see, there’s this guy called Thanos and he wants these 6 powerful objects called Infinity Stones to destroy the universe. Why? No idea. Maybe he’s sick of Marvel movies? So anyway, it falls to our merry band of super heroes to stop him. 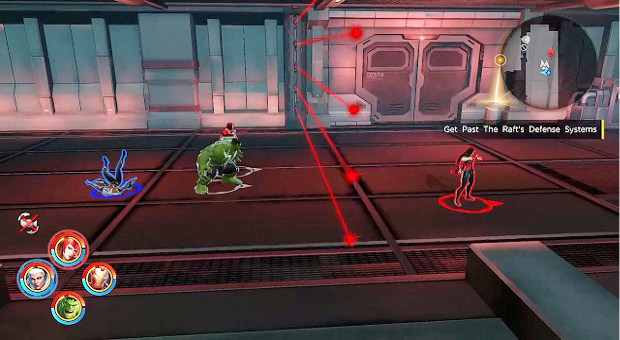 Storm on the left there has the amazing super power of falling flat on her back.

As you can probably tell, even despite playing through it, I’m not entirely sure what is going on. The plot assumes that you have some knowledge of what’s happening in the Marvel universe before even playing it. So naturally, I was totally lost. There are 3 different versions of Spider Man and I have no idea why. I’m sure the Marvel fans will notice a lot more nuance to it, but not me. It’s fine though, and it didn’t detract from my enjoyment, there were even a few moments when I had a good chuckle at some comedic beats and like any good superhero product, there are groan inducing puns up the wazoo.

The basic gist of the gameplay involves taking your team of 4 heroes through linear levels, beating up an army of bad guys along the way, as well as any bosses that try to square up to you. Each of the 36 characters shares the same general control scheme. You have light attacks, heavy attacks, guards, dodges, jumps and 4 abilities. The abilities are the main differentiator between the heroes and using certain ones at the same time as another character can cause extra beneficial effects to decimate opponents. As well as that, you can perform an Extreme Attack when you have filled up a certain gauge, your teammates can also jump in on this and boost the power.

The difficulty can rise and dip throughout the game with some of the later bosses causing a few game overs for me at times. There isn’t really a lot of room to manoeuvre when it comes to choosing characters as at some point, characters you don’t use will just be hopelessly under levelled, so you’ll be stuck using the same 4 characters on your first playthrough. Didn’t matter too much to me, once I unlocked Deadpool, I was happy to play as him. As well as levelling up heroes, you can also equip items called “ISO-8” to provide buffs and there’s a skill tree that provides permanent buffs to all of your characters. 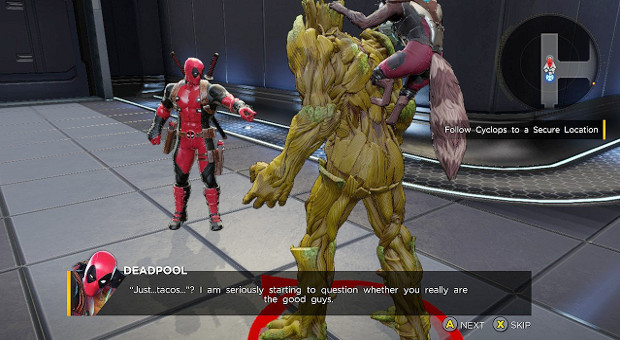 Everything involving Deadpool is pure gold, shame there isn't more of him, really.

The main selling point of this game to me is that it supports four player co-operative action. I was pleasantly surprised to see that the game supported both local wireless support and the option to have all 4 players share one screen. Of course, there’s also online support as well. This kind of game lends itself well for co-op with all the crazy action that goes on, but it isn’t perfect, and it’s quite a bummer on how that’s the case.

During the co-op mode where all the players share a screen, there’s no way to rotate the camera. It isn’t a problem most of the time, but there are a few situations where the camera is flat out unhelpful, which can really put a dampener on a session. This isn’t a problem with local wireless and online play, seeing as each player will have their own screen, mind. Another issue that started to grate after a while were the exceedingly long loading times; levels can easily take over a minute to load. It’s probably due to most of the 10 levels being quite lengthy, but it can still be annoying to sit through. What’s worse is that when you decide to change the characters that make up your team mid-game, there’s a noticeable amount of loading that happens. It’s especially long if you decide to swap out all 4 members of your team.

As far as visuals go, there’s nothing too special about Ultimate Alliance, it’s more important for this kind of game to maintain a smooth framerate. Something that the game does quite well, in both handheld and docked mode. The soundtrack feels kind of generic, really, nothing that memorable, but it all fits with the game, I suppose, so I can’t fault it too harshly on that. The voice acting is great though, top marks for that. 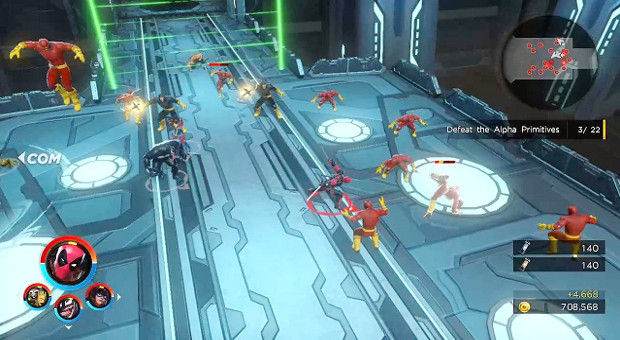 The annual "Silly Costume" conference always ends up spiralling out of control.

If you don’t mind the somewhat mindless gameplay loop that this genre entails, there’s a good time to be had with Marvel Ultimate Alliance. But some noticeable problems keep it from being truly super (Groan all you like, I don’t care). With all that said, I still don’t really care about the Marvel franchise, so don’t expect me to be rushing off to watch all the movies just because I had a good time with this.

Marvel diehards will certainly enjoy the fanservice on offer here, but even if you have no idea who the bloody hell Scarlet Witch is, there’s a solid Hack ‘n Slash to play through, if you're willing to overlook its flaws.

Good, mindless fun, especially in co-op.
Marvel fans will get a lot out of the 36 characters on offer.
Voice acting is entertaining throughout.

Hack ‘n Slash gameplay might get repetitive for some.
Long loading times.
Some serious camera issues in single-screen co-op.
Not enough Deadpool dialogue.

"If you don’t mind the somewhat mindless gameplay loop that this genre entails, there’s a good time to be had with Marvel Ultimate Alliance."