Who looks into the portfolio of Ratalaika Games quickly notices that this publisher focuses on bringing a steady stream of cheap (under a tenner) titles to Nintendo's various eShops. On the Switch you can already find a number of titles, where Midnight Deluxe is one of the newest. Maybe you have played Midnight 1 and 2 on the WiiU before, then you know what you can expect in this Deluxe version.

The game can best be described as a 2D golf title with some puzzle elements. Don't expect greens, flags, clubs and caddies though. The setting of the game is not that of a classic golf title. Midnight Deluxe places you in a moody, dark world filled with creepy eyes and deadly traps. It is up to you to navigate the white, glowing cube Midnight safely to the glowing hole. 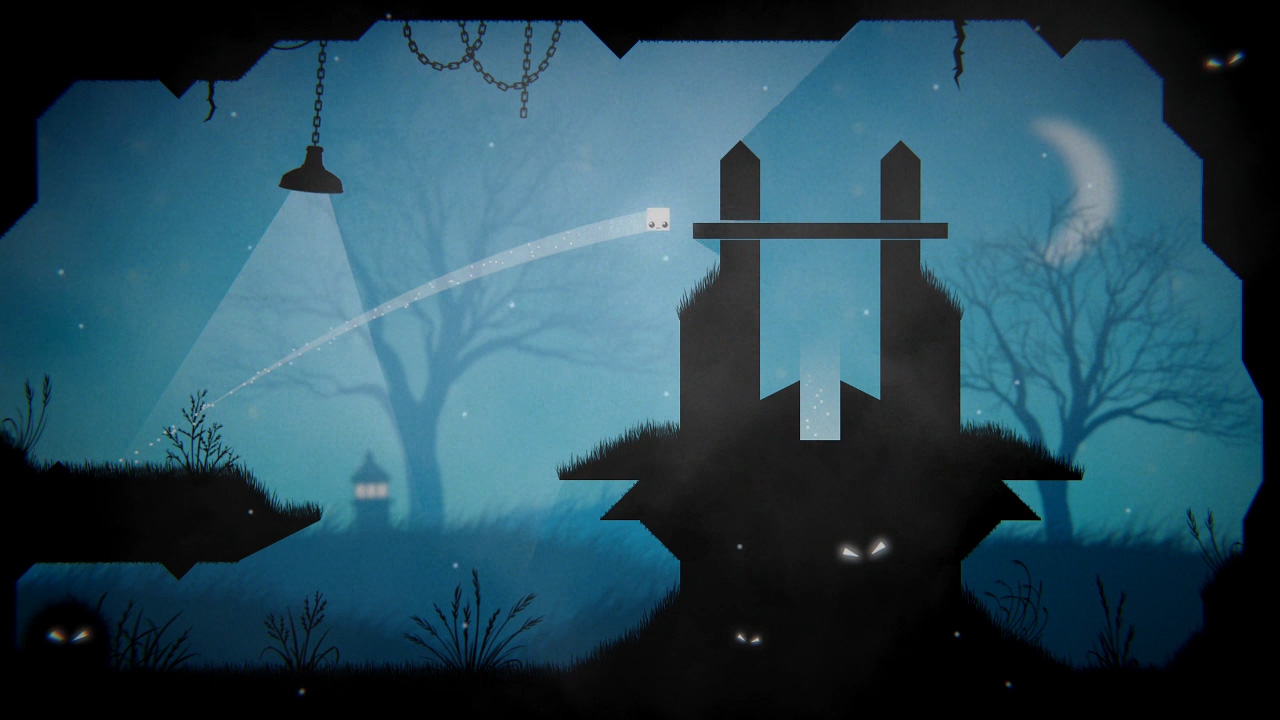 This is done by shooting little Midnight around the level. By holding A and pushing the left stick you can adjust your angle or power. Releasing A sends Midnight flying. There is no limit to the amount of moves you can make, although less moves means a higher star ranking at the end of the level (three stars is the max and often a hole-in-one is needed to achieve this).

The level design itself is of mixed quality. The art style is charming as it paints a dark, moody picture reminding me of games like Limbo. Accompanied by a pretty and atmospheric piano soundtrack the mood of this game is fine. The levels themselves however are a mixed bag. Some are very easy, while some are frustratingly hard, but not for the right reasons. 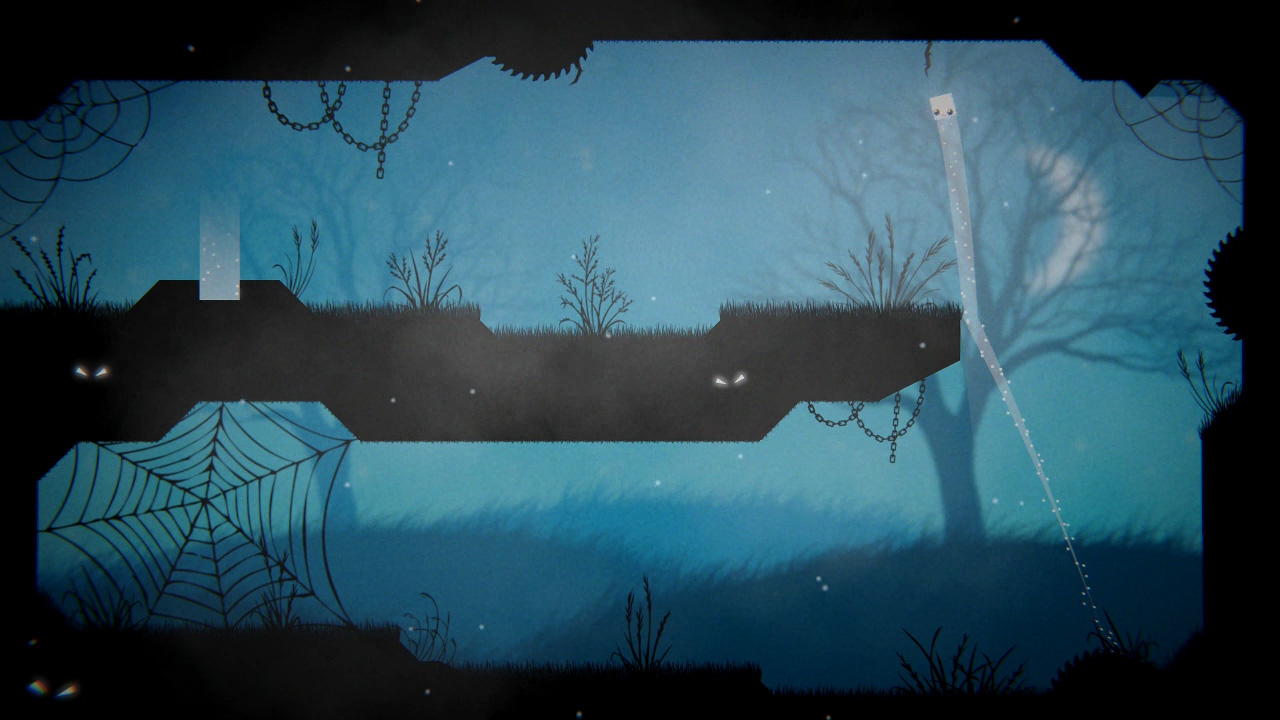 There are a number of interactive elements such as rotating platforms, buzz saws trying to dice you up and spikes. These are used to bring some variety into the levels in which partially succeed. However they are often used in the same way. The difficulty in the levels comes mostly from small gaps and platforms you have to navigate.

This would be no problem if the controls are tight. They are not that smooth however. As mentioned earlier the left stick is your weapon for determining angle and strenght of your shot. Especially on the Joy-Con this is not accurate, and it never feels like you really know if your aim is good. Reproducing the same shot is also near impossible. You can luckily quickly restart a level by pressing X, a function which you will use a lot. But the feeble controls result in a trial and error situation, which becomes quite bothersome. 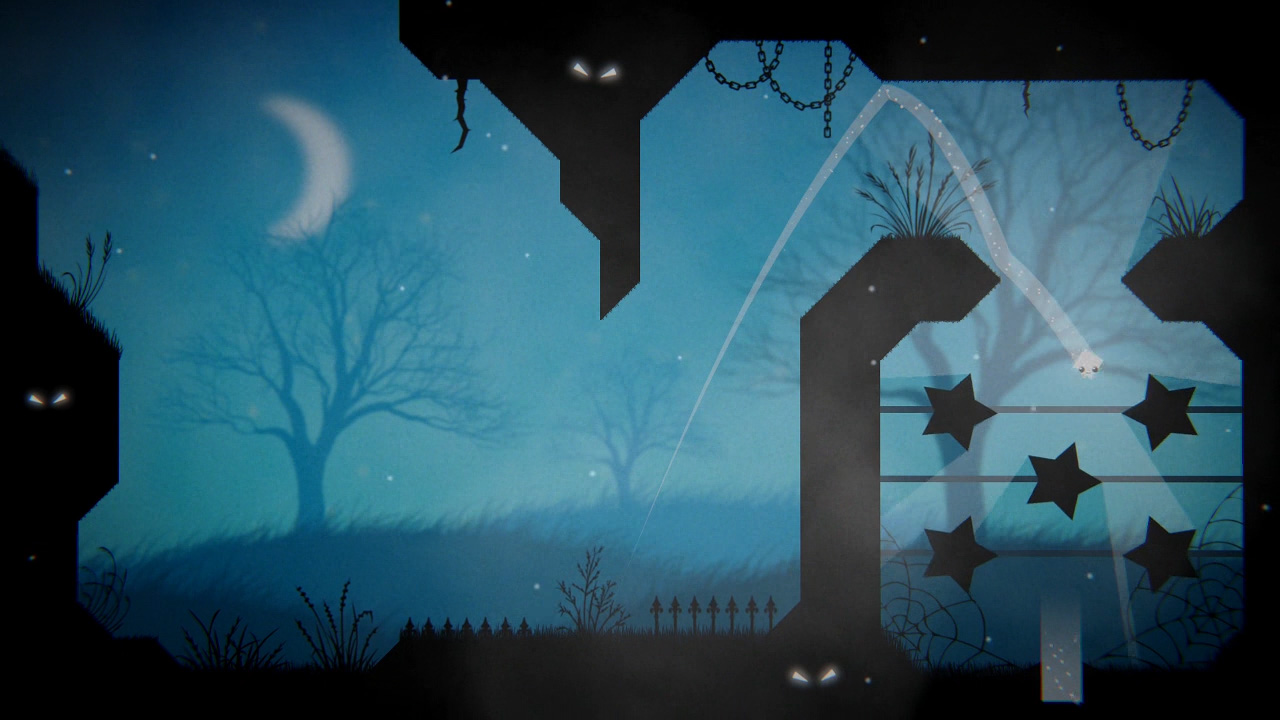 Touch screen controls are also supported. The problem here is that, instead of drawing your finger to the left of Midnight (like in games such as Angry Birds) you have to draw it to the right, covering up your playfield. The only playstyle that worked for me was using the Pro Controller, as it has a sturdier left stick. But even then I did not really feel like I had total control over Midnight, something you wish you have in some of the more difficult of the 70 levels.

Midnight Deluxe is a pretty short, atmospheric golf/fling/puzzle game. Accompanied by a soothing piano soundtrack this game could entertain for a couple of hours. The repetitive level design and mediocre controls take a big bite out of the fun though.

Atmospheric setting
Soothing soundtrack
Easy to pick up and play

The levels [...] are a mixed bag. Some are very easy, while some are frustratingly hard, but not for the right reasons.