The potential of videogames as a medium is almost infinite. Limited only by the imagination of the developer, budgets and (rapidly diminishing) technical constraints, they can transport us to other worlds, replicate reality and allow us to walk in the shoes of our heroes. How ironic it is then, that one of the most revolutionary titles of the last few years was a game that made you feel like you were back at school, carrying out seemingly mundane tests. The magic was that this was a school that you wanted to go to. Everyday. Until your brain was a throbbing powerhouse of mental 'Mars Attacks!' muscle.

The original 'Dr Kawashima's Brain Training' was an anomaly. How could a video game revolving around mathematical puzzles, grammar and tests be any fun? Nintendo, it seemed, had lost the plot. To this day, the answer is not forthcoming: the simple fact is that it really shouldn't be fun. However, despite all logical arguments to the contrary, Dr Kawashima's Brain Training proved the sceptics wrong. Spear-heading Nintendo's drive to lure grey-gamers away from their knitting, while at the time surprising more hardcore players with just how engaging its (frankly, bizarre) concept was, it confounded expectations whilst almost single-handedly opening up a whole new market. Two years and millions of copies later, Brain Training is a bonafide phenomenon, flexing brain-cells all over the world. As with all such successful titles, a sequel is never far behind, and More Brain Training from Dr. Kawashima: How Old Is Your Brain? is that inevitable follow-up.

Structurally, the game follows the same format of its predecessor. Designed to be played for 'minutes a day' the overall objective is to lower your brain's 'age' to the target of 21 through the completion of a series of tests. So, while on the surface More Brain Training may appear to be more of the same, a short time spent exploring its monochrome charms quickly reveals that the titular Dr is as dastardly as he was on his first outing, and he soon has your brain bouncing round your skull like a rubber ball in a blender.

Like the original, More Brain Training does not rely on graphics to draw you in. In fact, the presentation is best described as functional, with only Dr Kawashima's effervescent, polygonal floating head and a few monochrome jumbo-jets to liven up the otherwise largely static screens. Minor improvements have been made to the audio, but aside from this it's very much business as usual. Such is the genius of this title, however, that more exuberant graphical and audio flourishes are not missed. In the same way the functionality of the humble cross-word puzzle cannot be improved with colour or aesthetic details, More Brain Training understands that its value lies in its ideas, not in its presentation. 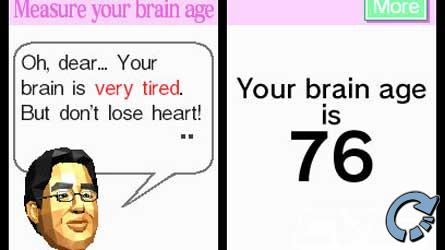 With the frame-work of the original in place, More Brain Training is able to focus on content, and we're pleased to say that this is a game more than worthy of bearing the famous 'Nintendo Seal of Quality'! It would misleading to say that the tests on offer here are 'better' than those in the original, but they are refreshingly different and never feel like they're re-treading old ground, frequently displaying staggering levels of ingenuity. Take its version of 'Rock, Paper, Scissors' for example. Presented with a series of images, you are tasked with either losing or winning games in rapid succession. To lose against a 'rock' symbol, you must shout 'scissors!', or 'rock!' to lose against 'paper.' This simple premise, which should (on paper!) be incredibly easy, in reality twists your mind in ways you hadn't thought possible.

As each new test reveals itself (with more tests being unlocked the more you play the game) you find yourself constantly surprised and, more importantly, challenged. Not limiting itself to number and word based tasks, More Brain Training also has you playing the piano using the touch screen (in 'Masterpiece Recital'), drawing symbols and completing free-form dot-to-dot puzzles, to name a few. The breadth and variety of the games (from their pacing to their core premises) is wonderful and go some way to convincing you that the science behind Dr Kawashima's theories may actually be well grounded!

More Brain Training is a generous package. As well as containing Sudoku as in the original, you also get Germ Buster. Essentially Dr. Mario played with a stylus, the DS' ability to breathe fresh life into an old game is revealed yet again. Although relatively slight, Germ Buster is perfect for on-the-go gaming and is an addition that should not be sniffed at, especially as part of a package that already comes at a budget price of £19.99.

Utilising the diminutive handheld's features to the full; this is a title that simply could not exist on any other console without concessions having to be made. The game has the ability to inspire the gamer to compete with themselves (and other users – the game supports up to 15 players using a single cart), to improve and to achieve that elusive brain age of 21. Its hugely addictive and the purity of design on display is effortlessly mesmerising. This being said, there are still a few minor problems. Although the voice and handwriting recognition is generally about 90 per cent accurate, there are occasional blips that can lead to frustration. This doesn't happen often enough to spoil the experience and you do learn deal with it, but improvements made in this area would have been welcome.

More Brain Training is an important title for Nintendo. Having gambled with both the DS and the Wii in all but withdrawing from the graphical arms race, titles such as this have to prove that games can be a success without relying on high production values. The first was obviously a commercial and critical blockbuster, and there are no reasons why this sequel should fail to replicate this. Although not for everyone, Nintendo has managed to fashion a concept with near endless possibilities, and this sequel has all the charm and sparkle of the original - that it will enthral committed brain-trainees young and old is a no brainer!

A title that proves the value of ideas over bombast, Dr Kawashima still knows how to get into your mind!

Voice/handwriting recognition still only 90% accurate.
Not everyone's cup of tea!