Even though the original games featured simple sprites and no colour, the world of Pokémon has had an intriguing charm about it during its 25 year history. A world where young kids set out on their own to capture and battle animal-esque monsters is an escapist fantasy in itself but, The Pokémon Company has managed to create an interesting universe out of all the games and related media. The franchise has gone beyond battling Pokémon to everything from typing to brushing your teeth and of course photography.

Over two decades since the N64 game that charmed many people, New Pokémon Snap is out now on the Nintendo Switch, once again letting you capture perfect photos of perambulatory Pokémon. As with the original, you’re guided through different areas in an on-rails manner, and your goal is to take the best photos to please Professor Mirror (another in a long line of examples of nominative determinism in the world of Pokémon).

Each outing takes place in a certain part of the Lental region, and after each journey you pick through your photos to choose what you believe is the best example for each Pokémon you’ve snapped. You’re only allowed to choose one per species so you must choose wisely. You’re judged on categories such as pose, size in frame, and if there’s other Pokémon present. Of course it’s all judged by a calculation in the Switch, so while you may line up a shot that would make Lee Friedlander jealous, it may not pass mustard with Professor Mirror. 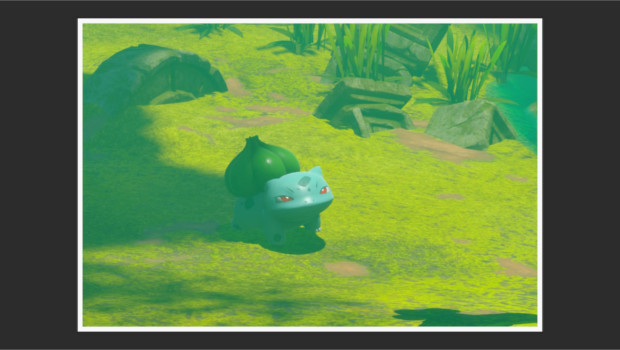 When you’re choosing which photograph of each Pokémon to show to Professor Mirror following an excursion, it allows you to select photos based on star ratings, from one to four, making it easier to know which to pick. You can also save one per star rating, although you can only pick one overall per excursion. It took me a while to realise a 4 star photo isn’t necessarily a better photo than 1 star, as the ratings are actually just capturing different predefined poses or actions. In essence, a 1 star photo is just the Pokémon going about it’s business, while a 4 star one is when the Pokémon is doing something more rare. Even if you can barely see the Pokémon you may get a 4 star rating.

While the core mechanics of the game are the same as its predecessor, the game is certainly bigger with more items, areas, and of course Pokémon. Yes, it is built on repetition and that will drive some people away after a while, but the game opens up new possibilities with its use of items, research levels, branching routes, and day/night cycle. The game’s new Illumina Orb item doesn’t make much of a difference most of the time - except for making them glow - but is used in some of the puzzles, and is critical to the Illumina Spot areas. 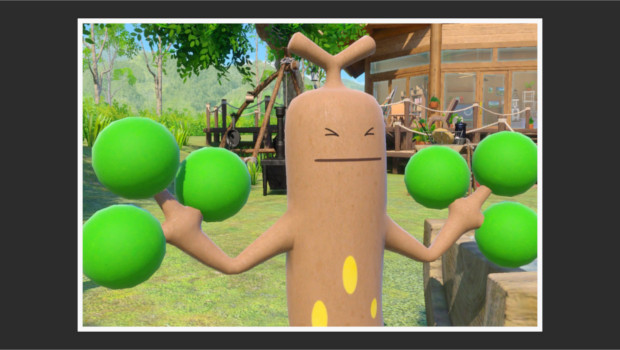 Is it a tree? Or a Pokémon? It's both! Sudowoodo looks petrified.

You are awarded a research level in each area you visit, and this broadly corresponds with how comfortable the Pokémon in that area are with you. When you first visit some will be shy, but the more you return, the more comfortable they are with you, and the better your photo opportunities are. In addition to this, when you return you’re not looping through the exact same thing; Pokémon continue to live in the area when you’re not there and small changes appear which in turn open up new possibilities.

The game is ultimately built on going through the same areas, but it rarely feels like dull repetition. Small changes in how the Pokémon act, as well as different ways to interact with them (throwing fruit, scanning them or playing a melody for them) means no two trips are exactly the same. In fact, you’ll go through the first area several times before being allowed elsewhere, but it doesn’t feel like you’re stuck in a tutorial.

This time around, some of Professor Mirror’s research assistants will also give you requests/hints for certain Pokémon. This can act as gentle encouragement to explore things you may have missed, or essentially a cheat sheet on how to get the best photo ratings, depending on your stance. It may take some of the ‘figure it out yourself’ charm of the original, but it does mean you’re less likely to get stuck while trying to progress. 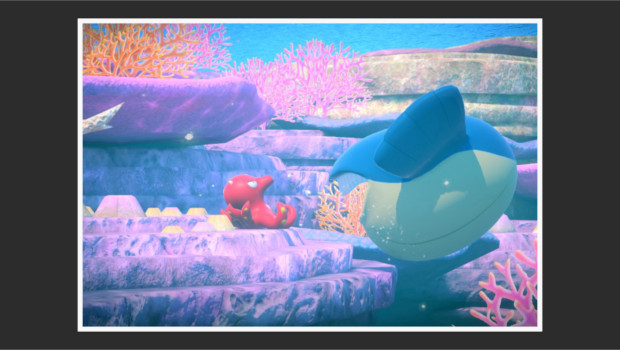 An underwater encounter between an Octillery and a Wailmer. You won't see this on TV.

A modern photography experience wouldn’t be complete without stickers and social sharing, and New Pokémon Snap offers this in spades. Once you’ve taken some photos, you can adjust them, changing the focus, brightness, or adding a filter. You can also add some stickers and share all of these with friends online, or even print them thanks to a collaboration with Fujifilm.

New Pokémon Snap is full of charm, and that comes down to the Pokémon themselves and how they interact with each other. Seeing Duckletts laughing at Magikarp, or Grookey and Pichu playing together, and Machamp doing muscle poses at the beach, make the world feel alive in a way the mainline games sometimes fail to.

Anyone worried that the game will be finished quickly needn’t be, there is a surprising amount of variety in here. From the number of courses to the way Pokémon change when you revisit, there is a lot to explore, certainly much more so than the original which felt much more scripted.

If two heads are better than one, then you might think three would be useful, but perhaps not.

Each section of the map has at least three sections; usually day, night, and Illumina Spot, although some work slightly differently. The Illumina Spot is where you will try and capture a photo of that area’s Illumina Pokémon, akin to the Gigatamax Pokémon from Sword/Shield, that essentially act as low-stakes boss battles as you have to trigger them to glow and then go snap happy.

New Pokémon Snap is probably the best these Pokémon have ever looked in a game, particularly in some of the cut scenes. As mentioned previously, the way they act, and interact, brings them to life and I found myself occasionally forgetting to snap photos as I was just watching what they were up to. The game does occasionally suffer from slow down when it tries to do set pieces, but overall it holds up well.

I know some fans were fond of the music of the original, but honestly I can’t recall any of the music from this game. I don’t necessarily mean that in a bad way, it just blended into the background. The cut scenes do feature voice records (available in English and Japanese), but whether that’s a good thing or not depends on your patience. 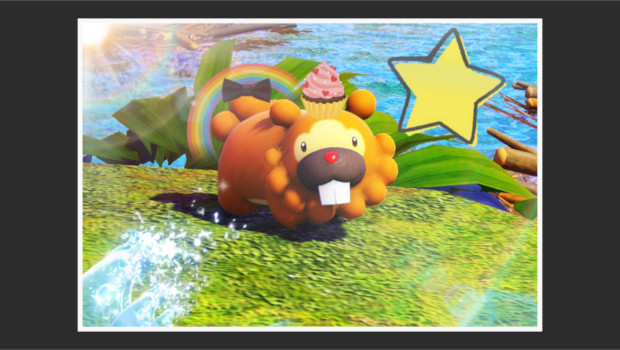 Bidoof is clearly the real star here, what more does a Pokémon photography game need?

There are of course annoying aspects, but they are relatively minor. Hearing “A new discovery!” every time you show your first picture of a new Pokémon is exhausting, particularly at the start where every Pokémon is new. Some of the tutorials feel slow, and so can the NEO-ONE sometimes until you get a late-in-the-game boost. All in all once you’ve got your items and you can just start exploring it becomes a very enjoyable title.

Overall I was pleasantly surprised with how much more depth there was in New Pokémon Snap. I honestly expected something like the original game, but there are more places to explore, more variety when you repeat them, and of course more Pokémon than previously. If you want something that is low stakes and full of charm, then you can’t go wrong with New Pokémon Snap.

It may be because I had low expectations, but I really was surprised with the depth of this game. It won't take you 40 hours to complete, but if you want to try and complete your Photodex, and explore every nook and cranny, then it will take you a while. Watching the Pokémon dance, fight, and play is really charming to watch, and if you've been a fan of the franchise - even on and off - then it is worth picking up.

New Pokémon Snap is full of charm, and that comes down to the Pokémon themselves and how they interact with each other. Seeing Duckletts laughing at Magikarp, or Grookey and Pichu playing together, and Machamp doing muscle poses at the beach, make the world feel alive in a way the mainline games sometimes fail to.