Making a game that follows the monster collecting style RPG comes with a number of risks, the biggest of which is that you’ll inevitably be compared to the king of the genre, Pokémon. There’s a number of ways you can try to navigate around that particular comparison, such as introducing your own twist on the formula to differentiate your game. Or you can be like Nexomon: Extinction, and play up to how silly the idea of taming dangerous monsters and using them to effectively mug other monster tamers for their cash truly is. and to make your monsters stronger. Which the game will happily point out how messed up it all is.

This game doesn’t even try to hide its inspiration. It’s a Pokémon clone and it is not ashamed to let everyone know that. But simply aping the juggernaut that is Pokémon does not guarantee a great game. It’s because of this that I booted up the game with a sense of trepidation.

The game starts off with a dramatic, serious explanation of the world the game takes place in. It’s a world where giant monsters called Tyrants are having an all-out war to determine which one of them gets to be the next King of Monsters. The human race finds themselves caught in the middle of this war, and it’s causing all sorts of death and destruction. So humans have started taming the many Nexomon that populate the world in an attempt to defend themselves and find a way to stop the monster war. Your character, an orphan, finds themselves thrust into this battle after getting attacked by a random and massive dragon, and forced to use a Nexomon so they don’t get smashed to a pulp.

As I write that down, it sounds like a pretty grim and edgy take on an RPG of this style, and I was concerned because that’s difficult to pull off in a satisfying way. My fears, however, were unfounded because of one single aspect. 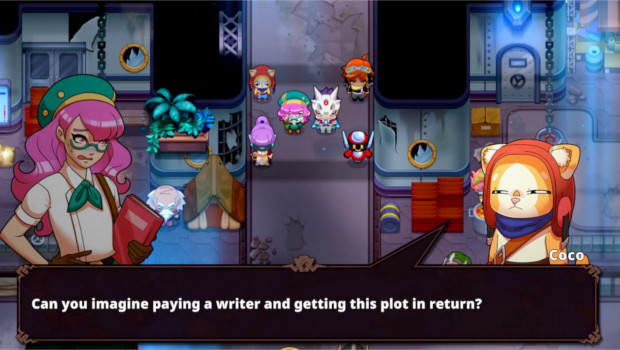 Nexomon: Extinction plays the entire story up for laughs, and it does so spectacularly. Every conversation is an opportunity for the game to remind you that “Hey, this is a really stupid plot”. This sort of comedy normally comes from your feline sidekick, Coco, who clearly despises being in this game. The fourth wall gets a real hammering throughout the story, and it’s an utter joy to talk to every NPC just to see what nonsense they spout. I lost count of the amount of times I burst into giggles while reading stuff in this game, and unlike what the screenshot above implies, that writer totally earned that paycheck. It’s not perfect, though. There are more than a few typos in the English script, which takes the shine off of it a bit. It’s not a constant occurrence, but it happens enough to be noticeable.

If you’ve played a Pokémon game before the 3DS was a thing, you’ll already have a good idea of how Nexomon plays. You travel around the world, collecting Nexomon, and building a team to fight in the inevitable battles you find yourself in. The world is surprisingly open ended, with very few places that you can’t actually get to from the start. It sounds like a nightmare to balance the difficulty around that sort of freedom, but with your opponent’s strength being determined by how far into the plot you are, it’s never really a concern.

There are a number of side quests throughout the game for you to tackle as well. Completing these is definitely worth it, as you’ll most likely be rewarded with items that give you a permanent boost just by owning the item, such as an increase in the experience points you receive. The writing is just as funny as in the main plot as well, so I never got bored of doing these. 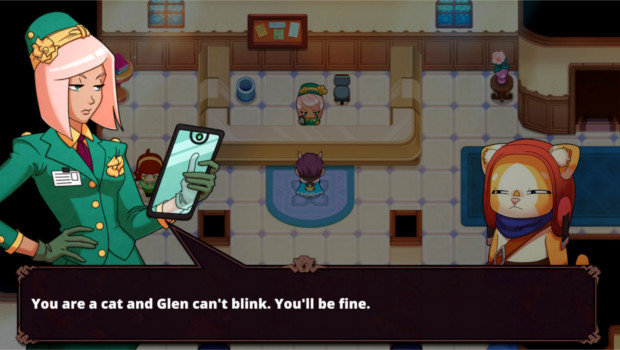 How did she know!? My eyes are proper killing me at this point!

What’s even more like Pokémon are the battles. They’re turn-based and involve you exploiting type advantages to get the upper hand. There are nine different types of Nexomon, each with their own weaknesses and strengths, so building a balanced team is the way to go. One slight difference is the stamina stat each Nexomon have. Using skills will deplete this, and stronger ones cost more stamina. Run out of stamina, and you’ll have to spend turns doing nothing but replenishing it. I think this is a good way of forcing the player to not stick with just one party member, which tends to be a valid strategy in Pokémon games. Another neat aspect is that weaker attacks also tend to have higher speed priority than strong attacks, so using a weak attack can help to guarantee a KO, or to get one last sneaky hit in before your Nexomon faints.

Unlike Pokémon, Nexomon only ever have one type assigned to them, so the variety of Nexomon is a bit lacking, considering there’s almost 400 of them. You use one water type Nexomon and you’ve pretty much used them all. There are also no multiplayer features, which comes across as a bizarre omission at first, but after the credits rolled, I didn’t mind this too much. Nexomon hasn’t had the decades of build-up that has made the Pokémon series so wonderfully complex, and Nexomon is a lot more straightforward and old-school with its battles, so it’s not a big deal-breaker for me. Some trading features would’ve been nice though. 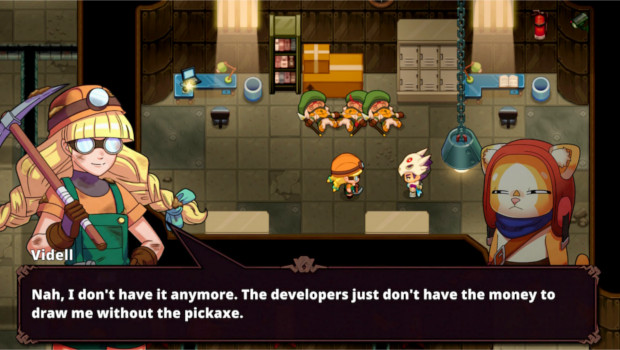 It's probably lodged in that fourth wall you've destroyed.

The mechanics in Nexomon are solid, and a lot of fun for monster-collecting enthusiasts, but the performance of the game is quite ropey. The actual pace of the game is very quick and snappy, and loading times are near instantaneous, but whenever a new scene is loaded up, there are some noticeable framerate issues. Skipping is abundant during these moments, and it’s an unfortunate blemish on an otherwise fun game. It is a turn-based RPG, so it’s never a problem with the actual gameplay, but people sensitive to this kind of thing might have issues.

The visuals are nice enough, each monster has a nice big sprite, and the whole game has a style that reminds me of a Pokémon parody animation on Newgrounds (not a bad thing, it’s very pleasing). The monster designs are pretty cool too, apart from the handful of Nexomon that I couldn’t help feel were a bit too inspired by the series it’s based on. 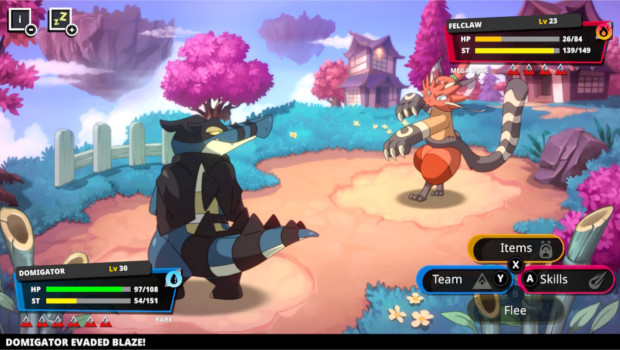 I unironically love the name 'Domigator'

Yeah, that’s a Krookodile painted blue and given a cape, and I kind of love how brazen it is. Anyway, Krookodile wasn’t in Pokémon Sword and Shield, so I suppose that’s one con that game had that’s now solved. Life has a funny way of working your issues out. The soundtrack is serviceable, nothing really jumps out as great, but it’s not horrible. Perfectly average is how I’d put it.

Nexomon: Extinction is not subtle about what it is; it’s a Pokémon clone that serves as a good, cheaper alternative to an actual Pokémon game. This game will most definitely appeal to people who miss the 2D style of Pokémon that has become obsolete recently. It’s definitely worth the entry price, even if it is rough around the edges.

Framerate issues whenever a scene change happens
All of the Nexomon have only one type, which kills complexity
A small amount of Nexomon do look like knock-off Pokémon

If you’ve played a Pokémon game before the 3DS was a thing, you’ll already have a good idea of how Nexomon plays. You travel around the world, collecting Nexomon, and building a team to fight in the inevitable battles you find yourself in.