Arriving in a new town as manager of their current club, I was determined to leave my mark. First up was immediately changing the team’s image: changing the name, kit and emblem into those of m own choosing. The newly revamped Cubic County were ready for some action. The only problem was that they were not very good. Not yet, anyway.

Nintendo Pocket Football Club, known as Calcio Bit in Japan, is a football management from Nintendo, and will be available on the 3DS eShop. It has very charming 2D “sprite” players on a simple 3D pitch, creating a very clean looking game that is nice to look at, and it has a pleasant soundtrack throughout the game’s menus.

Anyway, back to how managing Cubic County works. The main bulk of improving your team is via training cards, which are gained during all matches: practice, friendly, league, cup and online. During each in-game week, you can use up to three of these on each player, which will then improve their stats. If I felt like Ashley was a bit sluggish, I can give him some Sprinting and Oil Therapy training, I can make Chris get on better with the fans with Freestyle and Signing or I could make Franklin better at defending with Sliding, Line Control and Marking.

The trick is to find the combination of cards that work well with each other - you’ll find that some sets of two cards can have better results than three random cards, while other sets of three can yield great results. There is a lot of trial and error involved, but it pays off when you find one of the 125 special combos that give your players the best stat increases.

After you’ve sorted out your training for that week, you can head to the stadium to play a league or club match. If you don’t have one scheduled, you can choose play a practice or friendly match against a small selection of teams or skip that week if you want to rest your players. A practice is only one 45 minute half, but you don’t have any fans present, meaning you don’t have to perform well to satisfy them, while a friendly won’t affect your results, but losing will result in unhappy fans.

Before a match starts, and during half time, you are able to choose your team’s tactics. You can set your player’s positions on a grid, making for very flexible formation options. You can alter your playing zones, attack v defence (attacking, balanced or defend) as well as setting specific players to mark. Despite these tactic options, player stats does seem to be the major factor for who wins, unless you set utterly stupid tactics like putting 10 defenders in one corner - Yes, Pocket Football Club does actually allow you to play with that, as I made Cubic County do once in a practice match. Even if the tactics don’t make a huge impact, it’s still fun to set them to what you think you’ll need, such as changing to a more defensive position of you’re winning at half time.

During gameplay, you can check out different screens of stats, but the most important one is the substitutions screen. From here, you can alter the position of players and formation of your team, as well as check how tired your players are and make substitutions. One neat little touch is that you can press “A” on a sub and they’ll start jogging around and stretching, like they’re getting ready for a match. 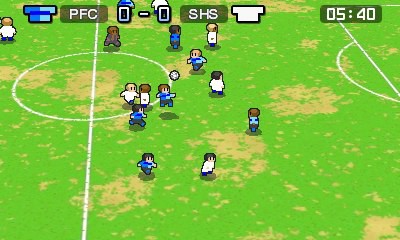 When you’re not making substitutions, you watch. The game is a fairly simplistic representation of the game of football, so there are only a few basic animations. The charming style does help, but some matches can get fairly boring - luckily, the game is built for times like that as you can set your 3DS down and listen to the sound cues while focusing on something else. The game even has a timer during half-time so it will automatically continue if you’re not paying much attention to the screen. On the flip side, other matches can be very entertaining (the mixture of both is a lot like real football). Watching Aaron pass to Sam who then equalise during a crucial match made me vocally cheer out loud, and I jumped for joy when Iun chipped in the winning goal.

Obviously, the matches are a lot more fun when you’re winning. However, losing in the game isn’t too bad. It’s not fun to watch, but you earn more juicy training cards in the process as your manager (portrayed by your Mii) will constantly yell at your team, coming up with ways for them to perform better. At the end of each match, you can save replays of individual goals or entire matches for you to view again later.

Outside of the stadium if your office. From here, you can manage your team. You can change the name of your team, choose the emblem from a selection of shapes and colours and design your kit. It also allows you to manage your players - all of whom can be renamed. You can even pick a name straight from your Friend List. This menu also allows you to sack or hire new players, as long as the transfer window is open. These players can be from computer control teams or from teams on your Friend List.

The other important building is the Airport. This give you access to the multiplayer features, including local and online modes. When you access this service, you will be given a Club ID which will be displayed on the leaderboards, allowing you to check out the top teams and play against them. You can also choose to play against teams from managers on your Friend List. Online matches work differently from normal matches as it uses a secondary manager. You move a few sliders around to choose how you want him to act (attacking or defensive, flexible roster or sticking with the same players) and the secondary manager will take care of the rest.

While this means that you have no control over tactics during a match, it does mean that you can play any team at any time - the other player does not need to be online. You also still collect training cards during this mode, making it a handy way of nabbing a few extra cards without advancing your single-player career. Nintendo will also be holding some official tournaments for managers to compete in. The SteeetPass and SpotPass options are also located in the Airport, and will both add teams to the list of opponents available for practice and friendly matches.

Nintendo Pocket Football Club is a great eShop title, and the perfect title to turn on for 10 minutes to set tactics and have a match. You will grow attached to certain player while another can continuously annoy you. Until they surprise you and set up an important goal or you sack them. You will see your team grow as you advance the leagues in your team and, if you manage to best them all and stay on top, there will be plenty of opponents waiting for you online.

A simplistic but charming football management game. The training cards add a lot of depth to the management game and there are an endless amount of times to compete against, due to the design of the online mode.

Charming
Lots of depth in training
You will grow attached to your team.
Simple but effective online mode.

Management during a game is lacking.
You need to dig through reams of text to find the meaning of some icons.
You and an online opponent can’t watch a match at the same time.

You will grow attached to certain player while another can continuously annoy you.