Well… where in the blue flames of Persephone do we start with this one?

NMH2 is most certainly a game with personality: it has quirks, oddities and eccentricities by the truckload, and it has you by the Wiimote from the very off. But this isn't a straight run at a sequel to the modestly successful No More Heroes, oh no.

Gone are the tedious overworld sections, replaced with a streamline hub and map interface. Gone is the bike, which thankfully only returns once, in an extremely painful encounter, and then disappears again. Gone also is the necessity to earn enough cash to enter into ranking battles, replaced with a witty and unusual story that is by turns compelling and terrifyingly confusing.

Without going into too much detail, Travis Touchdown, the renowned Otaku that made his way from zero to number one in such gory style, walked away from it all and disappeared. However, at the beginning of this new story Travis is compelled by a mixture of revenge and lust to re-enter the world of organised assassin fights, and he does it in style. 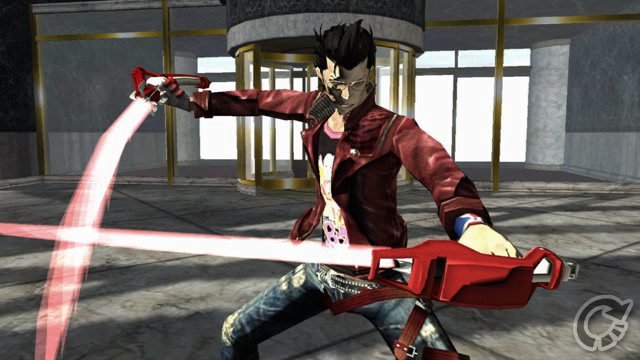 Style is a word that very much permeates every part of NMH2, and it's a trend that has become popular lately with games such as MadWorld and House of the Dead: Overkill exploring and exploiting artistic styles to re-invigorate their respective genres. Desperate Struggle is a game in the same mould, but it somehow manages to break the mould as it is cast by it.

Take for example, the training minigames: in true fanboy style, these minigames to boost your stamina and strength are presented in 8-bit format in the style of old Spectrum Cassette games. These recreations are faithful to the last detail – limited colour palette, tinny sound, two or three basic controls and supremely over-the-top difficulty.

This style is extended to the side-jobs where you can earn extra-money to buy upgrades to your beam katana and super-sweet threads. These games again take the form of old 8-bit style games. Gamers nostalgic for the old days will have the time of their lives here, older gamers will wonder how it was ever possible to successfully market and sell such technologically backward pieces of software. Whatever your perspective, however, the games are fun, challenging and never overstay their welcome, limited as they are to about 4 levels apiece for each minigame.

While the minigames and training games control pretty much using just the control stick and two buttons, assassin fights play out in stylistically rendered 3D and make use of the Wii-mote to carve up an almost neverending stream of enemies in a Streets of Rage style battle to the finish, where you are confronted with your main target, the next-ranked assassin in the league table. 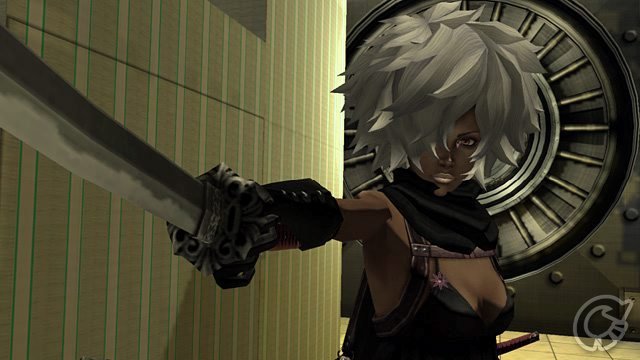 The Wii-mote controls are mostly for show as their function can almost always be duplicated by the A button, and in fact this is easier. However, cool finishers can be learned and performed which require vigorous motions of the remote and nunchuk, often in tandem and sometimes in opposite directions. Travis can dodge in four directions using the + pad on the remote and locks on to enemies with Z. Locking on is a useful ability in a melee situation as things have a tendency to get frantic – but never overwhelming. The beam katana itself is a great weapon, capable as it is of hitting multiple enemies in a single swipe. The animations for deaths are gory and spill and obscene amount of blood. Parents be warned.

In terms of difficulty, new players will definitely want to go for the easiest setting first, while old hands will be tempted to dive straight into the deep end. The first assassin fight is ridiculously difficult, and it's something of a let-down that the fights that follow seem to decrease in difficulty as you progress.

And it's the boss fights that really shine in this game, only proving to be a let-down in three instances. A typical side-scrolling beat 'em up basically never changes the formula carried throughout the levels with the boss fights: the end of level guardian is simply a tougher version of the standard street thugs. This is categorically not the case with NMH2. You will fight as a giant robot, battle a weird-looking doll in an abandoned house, face-off against a pair of near-identical cyborgs that can bring each other back to life… the list goes on. Every assassin is imbued with personality and detail, with some truly stunning attacks to boot.

The main let-downs come later in the game, however, and fortunately, they only detract from the overall experience in a small fashion. We cannot say too much without spoiling the story, but it is sufficient to say that things go awry when the game gets too clever and tries to bridge a genre too far. Happily, it doesn't go on for long.

The game sounds pretty good too, with a few interesting and telling orchestral stings and a thumping soundtrack that perfectly accompanies the on-screen violence. Travis is a foul-mouthed assassin who has absolutely no qualms about accompanying his physical batterings with amusing verbal tirades as well. Other characters are also packed with personality only let down by some limited soundbites that mean in the longer fights you'll hear the same two or three lines a thousand times. 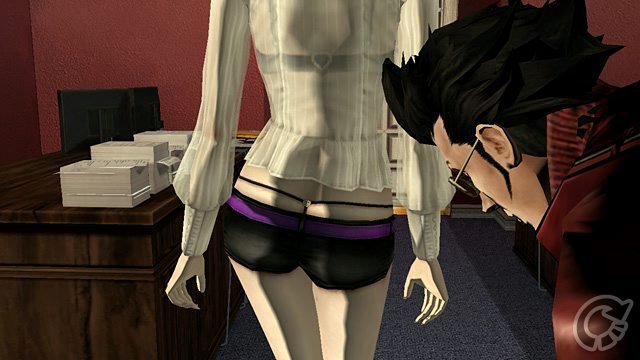 Graphically, the style cleverly limits the effects that the less-powerful Wii-hardware might have on proceedings by making the whole world a little less detailed than it could be, which works really well. The cut-scenes however are very lush in their execution, and there will be more than a few moments when the designers'… *ahem* attention to detail leaves you with your jaw on the floor.

When all's said and done, No More Heroes 2 is not a long game, likely to weigh in at under 10 hours for most gamers. But as with games such as Overkill, Extraction and The Conduit, the pounding story, relentless pace and exciting style will mean that you won't really mind the relatively short experience. Besides, with higher difficulty settings, there's always a reason to go back for seconds.

Overall, this game is a rare example of a piece of software that outdoes its predecessor in every way. It's smarter, sexier and more compelling than the original ever was, and worthy of a place in the collection of any true or indeed anyone looking to take a break from the more family-friendly experiences on the Wii.

A great game worthy of a purchase. Get your kill on!