Vile Monarch’s Oh...Sir! The Insult Simulator (henceforth Oh Sir) lets you insult your friends or strangers on the internet by stringing together different fragments in what is essentially a mixture of a diss battle and those word fridge magnets you had at some point during university.

At its core Oh Sir requires you to try and outdo your opponent and ultimately defeat them, using your words as weapons. Vile Monarch however has layered it with some interesting ideas that give it some variety and even a bit of strategy.

Each character takes up one side of the screen with a central collection of words and phrases in the middle available on a first-come-first-served basis. Each player also has two fragments in their ‘hand’ that only they can use or replace once by sipping tea. You must string together these fragments in turn until you are ready to unleash your devastating insult, which results in ‘hitting’ your opponent and lowering their health meter. 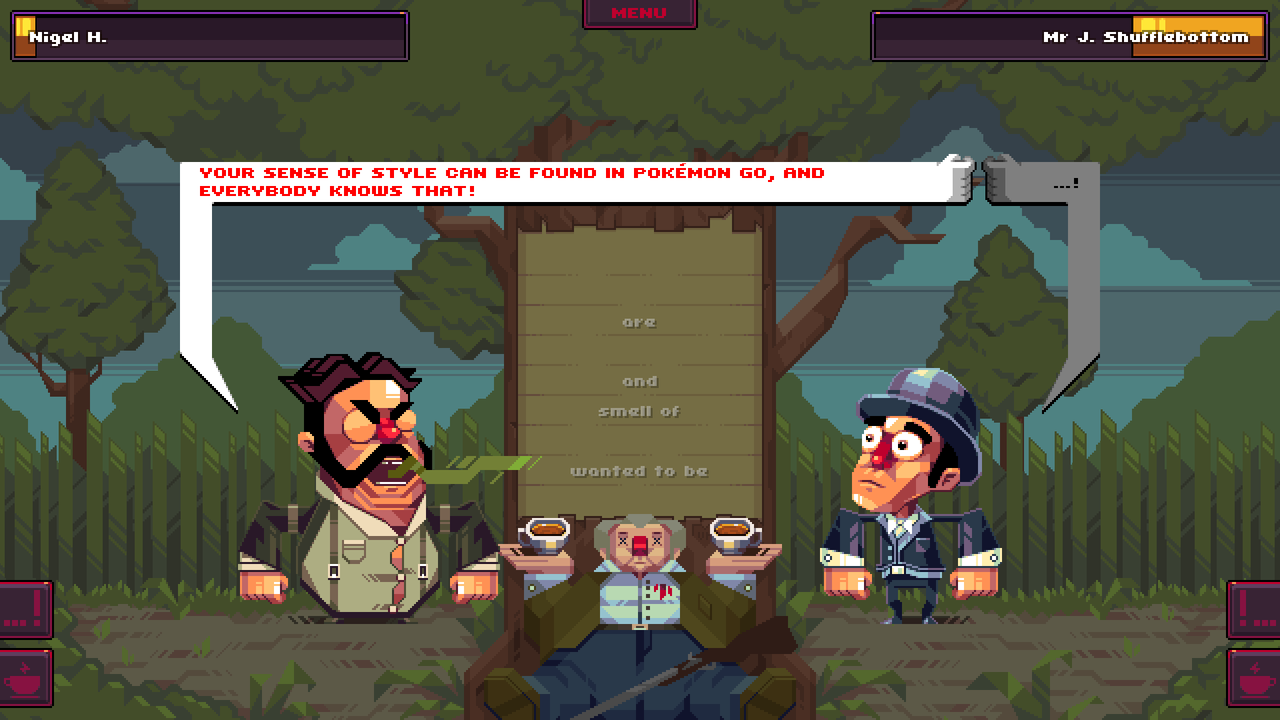 During each round you must build up an insult, which can be finished either by selecting a fragment that ends with an exclamation mark or at the press of a button. Sentences must be grammatically correct and if you’re unable to finish a sentence with the remaining options you end up petering out and doing no damage.

There are various characters you can play as and each has their own weak point. The dithering old lady is hurt more by insults about her age for example, meaning if you’re battling against them you’ve got to try and hit those sore points. Additionally, if you repeatedly use the same kind of insults to your opponent it forms a combo.

You can also choose to sit out of the round by selecting the ellipses option that crops up, allowing you to carry your sentence on to the next round. It provides an interesting strategic option - do you miss dealing damage during a turn (or multiple turns) in the hopes of scoring big later when new fragments are available to use? It's an easier decision to make early on, but as the health meters begin plummeting it provides a bigger risk.

Oh Sir is of course designed to be a funny game. Its charmingly stereotypical characters, bizarre mixture of insults and seeming non-sequiturs are supposed to amuse. Humour is of course subjective, so whether it works really varies on the player.

Personally it fell a bit flat and the reading out of the insults didn’t help matters. Obviously silence while you read out the insults would have been worse, but the robotic nature of the fragments being strung together by the computer lets a bit of wind out of the sails. The sentences end up, sounding almost like how, you, may be reading, this very sentence, in your, head. 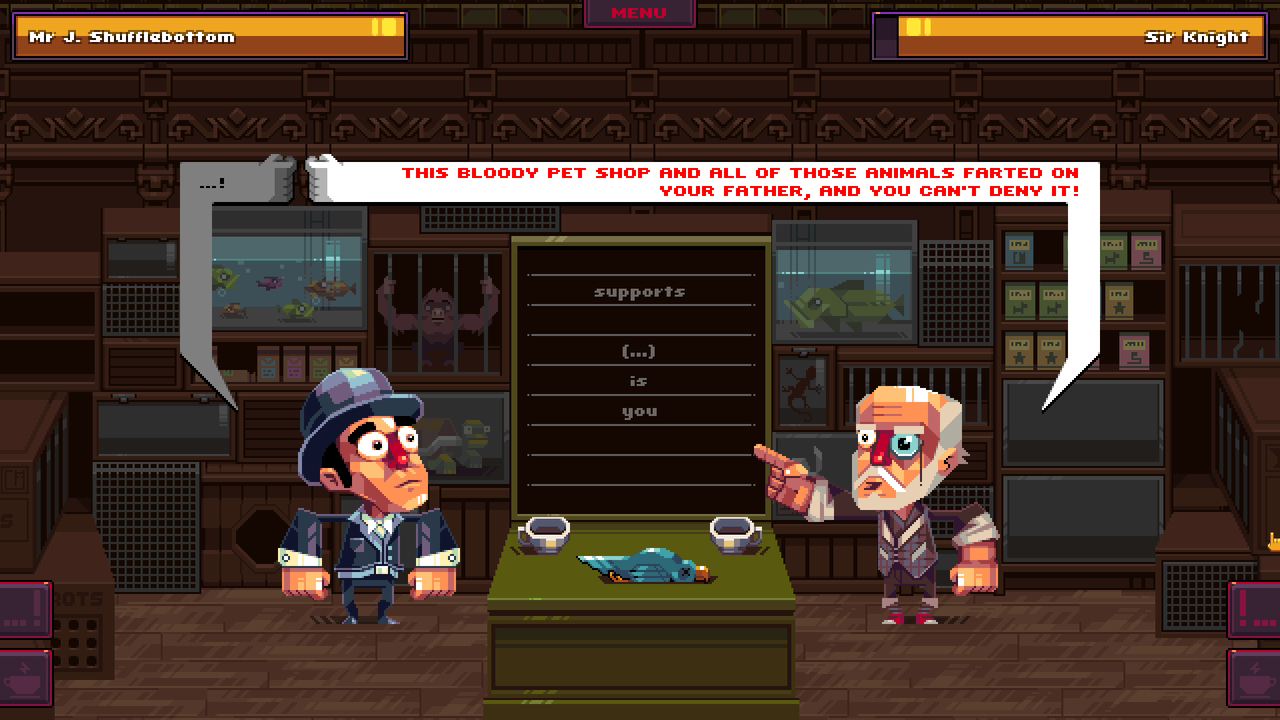 The humour itself seems to be largely inspired by the stiff-upper lipped stereotypes of Britishness (including the aforementioned tea sipping to get new fragments). Vile Monarch is a Polish studio, but a lot of the humour seems to be based on taking down the British seriousness a peg or two, not too dissimilar to how Tahani Al-Jamil is portrayed on The Good Place. This however isn’t meant as a criticism or a hurt feeling as a British person, just merely an observation about the type of humour on display. If you’re looking for Seth MacFarlane or Judd Apatow humour, this will not be the game for you.

While the individual fragments may be humorous, even if it is just because of how they vary from the weird (“your cousin’s car”, “walks silly”, “you cross-eyed inbred muckspout”) to the surprisingly pop-cultural (“sucks at Overwatch”), actually stringing them together sometimes just feels like an exercise in throwing pasta at the wall to see what sticks. I found coming across new fragments more amusing than actually their usage.

It is perhaps unfair to compare it to Cards Against Humanity as they’re not going for the shock ‘incorrectness’ that the card game is known for, but it’s easy to draw some parallels. They both design to try and get players to out-humour each other when they’re at the mercy of randomness and its almost a shame Vile Monarch didn’t take the opportunity to more actively encourage sharing your insults on social media.

The game has a few minor issues that by no means are deal breakers, but they can just weaken the experience a bit. Each round takes place at a location, which begins and ends with a cut scene setting up the scenario. This improvesque setup however soon becomes tedious as they never vary, even with different characters. They can thankfully be sped through. 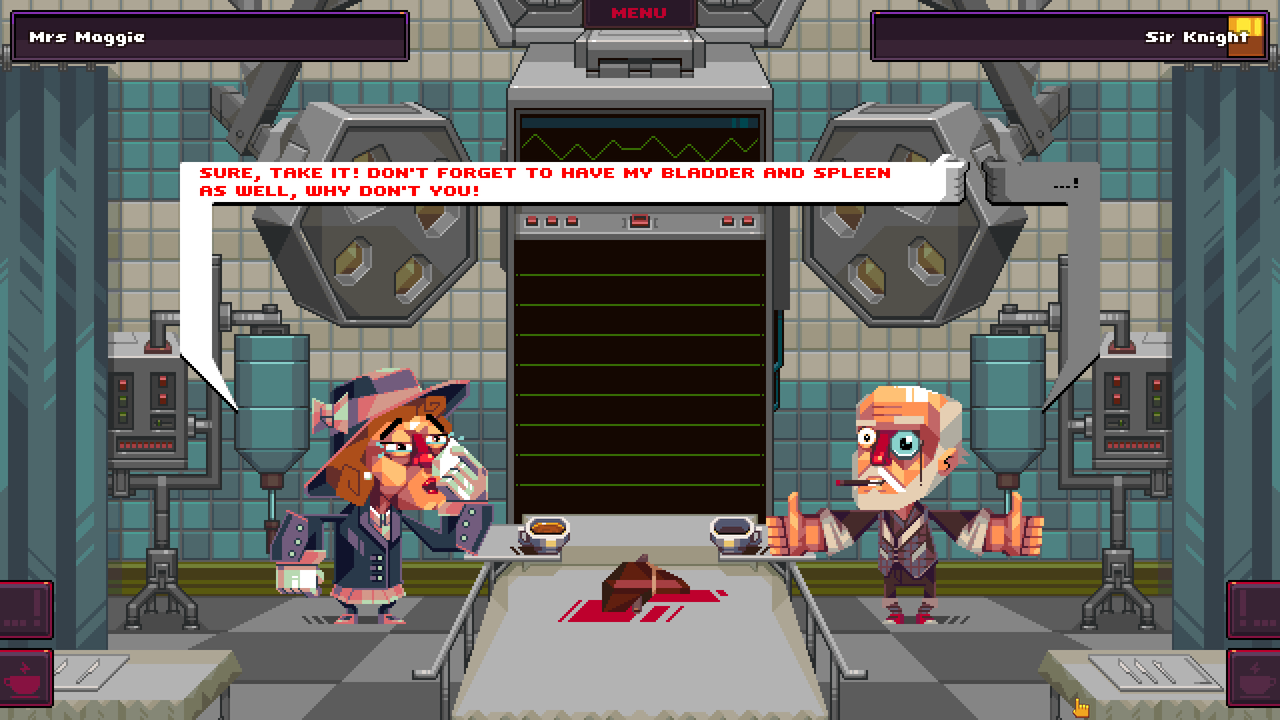 More characters can be unlocked in the single player Tournament mode, but there is little incentive to do so unless you just want new characters. They do little to change the gameplay and the Tournaments, a series of matches against the AI, take away the joy of insulting people you actually know.

Sticking to the rules of grammar can also be grating as you may want to follow up a fragment with something that would work colloquially but you’re scolded and have to miss that turn. Much like how the insults being read out takes some of the life away, this shows up the artifice in a manner that weakens the experience.

Ultimately humour is subjective and how much life you’d get out of this depends on your circumstances. It began as a mobile game and I think it is better suited for that. Not in a “mobile games are rubbish” mentality (as that’s patently wrong), but rather because you could more easily play with some friends and have a quick game. I played with some friends and it was fun, but there is little incentive in repeated playthroughs with the same people. Sure, when you want to show someone new it can be fun, but playing with the same people you’re just going to find yourself retreading old ground.

Oh Sir is however cheap (£2 for the standard game and £3 for the Hollywood spin-off discussed below) and given the amount of content in the game it is good value for money, but it just depends on whether you think this will really be something you find genuinely funny or just a brief entertainment.

If you enjoy it there is also the spin-off Oh...Sir! The Hollywood Roast, which takes the basic premise and applies a Hollywood angle. It works in largely the same way as the main game, but obviously with a cinema twist, although there are a few additions.

A new comeback feature allows you to take another jab at your opponent once you’ve charged up your comeback meter, adding a twist to the original gameplay. There is also a character creation mode and a clearer indication of how the fragments make up the total score. 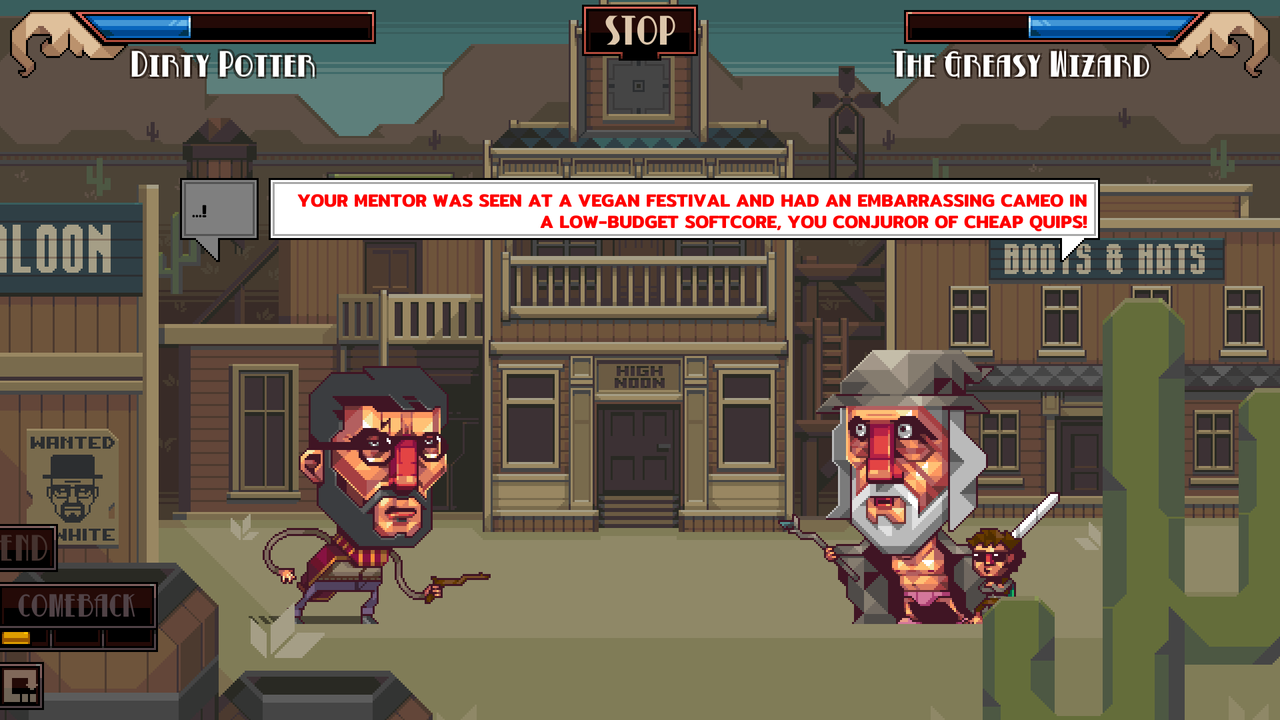 There is also a career mode in The Hollywood Roast, but it is essentially a series of matches strung together with AI that is never going to be as enjoyable as playing with a friend.

Much like the main game, The Hollywood Roast is good value for money, but its longevity really depends on your sense of humour and if you’ve got friends around to play it.

These two games pack a lot of content into a small price tag and credit where it's due, they have put a lot of effort into the art and sound. Humour is however subjective and its always going to be tricky. Good value for money, but whether you want it in the first place is the big (and personal) question.

While the individual fragments may be humorous ... actually stringing them together sometimes just feels like an exercise in throwing pasta at the wall to see what sticks.