Arriving with little build-up and fanfare, Paper Mario: The Origami King feels like a bit of an oddball, even for the Paper Mario series. From its surprise announcement and quick release, to its strange & misshapen premise, Mario’s latest adventure carries a lot of baggage; and I don’t mean the one with confetti in it! 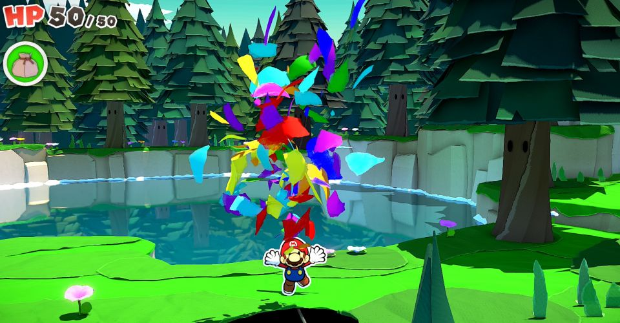 For every strand, a tear from the fans that wanted a remake of The Thousand Year Door

As the Wii U’s final exclusive title, Paper Mario Color Splash perhaps embodies everything good and bad about Nintendo’s previous generation of consoles. Hot off the heels of the much maligned, and arguably painfully misunderstood Paper Mario Sticker Star, Mario’s Wii U adventure ended up a delightful affair that basically nobody ended up playing; becoming the ironic punchline of Super Paper Mario’s most famous joke (you know the one).

Naturally, many assumed that Paper Mario Color Splash would end up getting a second life on Nintendo’s portable Wii U, err, I mean the Nintendo Switch! And indeed it has… but not in the way most of us expected! Paper Mario: The Origami King is clearly built upon the skeleton left by the Wii U outing’s carcass; running on the same game engine and with many an art asset unceremoniously stolen, there’s a surprising amount of gameplay content here whose plagiarism is thinly veiled to anyone who actually played Paper Mario Color Splash. Naturally, this means that your experience of this game will likely be coloured by whether you’ve played the previous outing or not.

The game’s confetti mechanic is a nigh-on identical stand-in for its predecessor’s Paint mechanic; the only meaningful difference being that the confetti serves no purpose in battle. Likewise, the Toad rescue mechanic calls to mind the Rescue Toad sequences from Paper Mario Color Splash (and indeed Mario & Luigi: Paper Jam Bros) but taken to an utterly ridiculous extreme in this case; while its Thousand Fold Arms is a hidden-path finding mechanic that takes the place of the cut-out mechanic from its colourful predecessor. Many of this game’s set pieces and locations will also likely feel somewhat familiar to anyone who has played Mario’s Wii U adventure…

… but that’s not to say that this game has nothing new to say! While I found myself initially bothered by how much of this game I had already seen before, thankfully there’s enough variety and new ideas on offer to make up for first impressions. 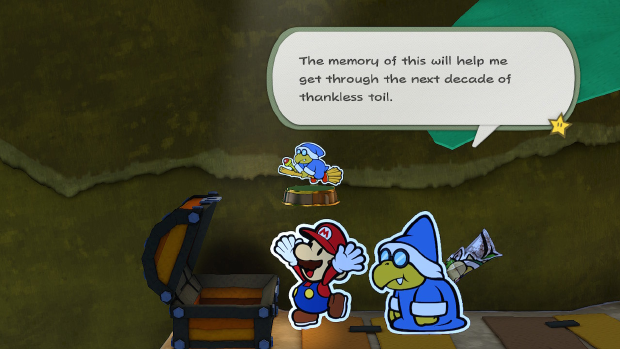 Belying its expertly handcrafted visuals and eclectic rag-time soundtrack, Paper Mario: The Origami King presents pacing problems, as its first foot forward focuses foremost on Mario’s lacklustre locomotion in lieu of provocative puzzles. The ridiculously relentless reliance on tedious Toad tracking also grows as overbearing and exhausting as this annoying alliteration does; as what worked for a series of small, focused Toad finding sections in both Mario & Luigi: Paper Jam Bros and Paper Mario Color Splash, simply doesn’t here when it gets scraped over too much bread. Ready to write the game off as a misstep in the series, I thankfully found myself pleasantly surprised as the latter half brings forth much more interesting set pieces and ideas to the table that freshen up the experience nicely.

Let’s look at what’s new here. Gone is the level-based structure of the Wii U and 3DS Paper Mario adventures, in favour of an interconnected map that more closely resembles the first two titles for the N64 and the Gamecube; however, unlike the earlier games, Paper Mario: The Origami King is a strictly linear affair. Rarely do you have any reason to return to older areas, but rather, you are scurried from one chapter to the next; as such, each chapter of the game is largely self-contained and focused on its own little vignette of the overall story. While this does allow for a more focused approach to the design of each individual area, and some great set pieces later on, it also greatly reduces the complexity of the overall puzzle design; as you no longer have puzzles that encompass the entirety of the game world & require travel from one area to the next, nor do you have to apply real lateral thinking in figuring out how to progress. You always have everything you need to progress right there and then. While this may satisfy some who hated the approach that Paper Mario Sticker Star and its successor took to puzzle design, I don’t feel that Paper Mario: The Origami King does enough to make up the shortfall in response, as its puzzles are largely pretty simple; largely boiling down to being attentive to the legion of environmental clues that obscure the pathway forward, and its myriad of hidden collectables along the way. Something that works well in isolation, but grows tiresome here, as its tricks get used and abused in excess.

Much the same could be said of its new-fangled Rubik’s Cube inspired battle system; whereby you are tasked with arranging enemies in the correct order and then wailing on them in classic Paper Mario fashion with hammers, jumps, and items. Initially all seems well with its novel approach to turn-based encounters, they even solved the problem of running out of items! Huzzah! But it’s not long before you quickly realise that there just isn’t much depth on offer here… after just a handful of encounters, the ring-based battles grew stale and only go on to grow mouldy from there. There are no meaningful resources you need to manage, no status effects to deal with, almost every enemy attacks in the same manner, and all are dispatched in the same manner. Just about the only wrinkle on offer is the ability to pay your audience to solve the arrangement puzzle for you and heal you; not exactly the most ringing endorsement of its own battle system here. Shockingly, there are only two non-boss enemies in the entire game that actually bring any significant variety to combat! And they both appear towards the end! It’s tragic that the designers at Nintendo & Intelligent Systems couldn’t think of anything else to meaningfully spice up the standard battles, as the end result is a tortuous exercise in monotony that’s about as much fun as working on a Rubik’s Cube for 30 hours straight. 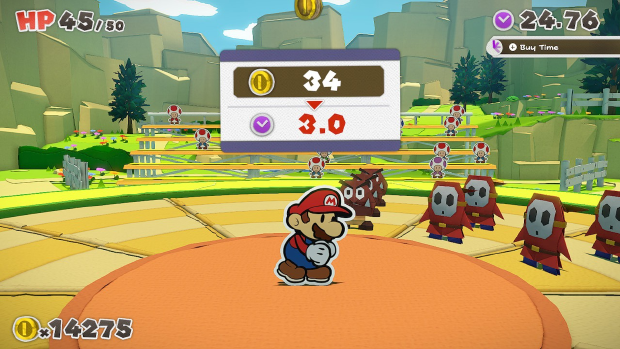 Pay to win, without microtransactions. Whatever will they think of next?

The boss battles are an entirely different story though, as they completely, utterly, and entirely, redeem the game. As the game’s producer Kensuke Tanabe himself stated, the designers couldn’t figure out how to make boss battles work with the existing framework; ultimately electing to turn the battle system completely upside down by dumping the enemy arranging mechanic in favour of arranging your battle actions and movements using the same set of rings, to guide Mario to the right items & positions that he needs to bash the baddie and win the day. Quite frankly? I feel that they should’ve just dumped the regular battles entirely and just stuck with having boss encounters, because they are A-grade material all the way through; from the battles themselves, to the dialogue, to their music, to their surrounding set pieces. They are brilliantly creative, varied, stimulating, hilarious, and befitting of every wonderfully kind adjective I can throw their way. Everything involving the boss encounters feels like a 10/10 game has just been anchored to a 3/10 one, and its well worth powering through the boring parts to get to them. 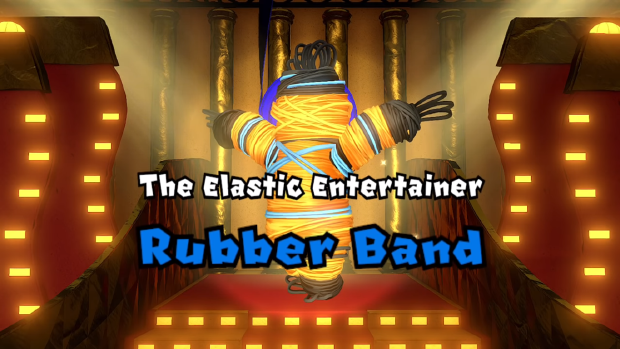 Make no mistake. The bosses are the stars of the show.

The minigames scattered throughout the game are also genuinely good fun, as are all the bits that generally expand on the standard walk n’ hammer gameplay; typically tied more closely to the boss encounters. The latter chapters also open up the level design somewhat, and encourage more exploration & thoughtful pondering, a welcome change of pace from the straightforward & simplistic beginning sections. This especially comes into play during the Wind Waker section (no, I am not explaining that for you, and yes, this sentence does make perfect sense!), perhaps my favourite part of the game. There are some great moments spread across the game that’ll make you laugh and smile for sure. Also, man, Paper Mario sure does love its body horror these days…

While I wouldn’t say that this game’s writing quite matches the laugh a minute hilarity of Paper Mario Color Splash, there are plenty of chuckles to be had throughout the game’s running time. The dialogue mostly hits the mark throughout, and also puts up some surprisingly tender moments despite the paper-thin story; with Mario’s new companion Olivia being as surprisingly three dimensional as her origami folds let on. Same thing goes for the excellent soundtrack that expertly marries itself to each area and set piece; often itself stepping in as the punchline to the setup gag, but always knowing when to set the right mood. No doubt, the soundtrack will make its way onto many a smartphone’s music collection.

There’s a lot to like about Paper Mario: The Origami King, with some fantastic moments that will sticker a huge smile on your face, but equally there are just as many parts that fall completely flat. And then there are the good ideas that get stretched to the point of tearing at their seams. It's ultimately a bit of a disjointed collage that doesn’t always work, but when it does? Its art shines right through the canvas. While not all will have the patience to put up with the one-note battle system and the rather sluggish start, much like origami itself, those that stick with the frustration of paper folding will eventually find beautiful art awaiting them.

Paper Mario: The Origami King is a strange game to judge. It’s so disjointed and uneven that it’s hard to recommend unequivocally, but its good bits shine so brightly that it's ultimately worth trudging through the scrap in order to get to the Origamido.

The boss encounters and everything surrounding them are worth the price of admission alone
A fantastic soundtrack, beautiful visuals, and brilliant writing make for some fantastic moments
Fun minigames and great bits of oddball gameplay later on. The good bits are really great!

Everything involving the boss encounters feels like a 10/10 game has just been anchored to a 3/10 one and its well worth powering through the boring parts to get to them.