When it comes to remaking a game, I imagine it can be a challenging task, striking a balance between what captured fans in the first place, and what improvements modern gaming can bring to the table. It’s why I get genuinely excited by the prospect of remakes in the colossal Pokémon series. The history for these remakes has been exemplary across the board, even Omega Ruby and Alpha Sapphire, with its slight missteps, is still the best way to play those games. But then the Switch came out, and Let’s Go became the first mainline Pokémon game that I just couldn’t finish. I won’t go into why because that’s not the remake I’m focusing on here.

Brilliant Diamond and Shining Pearl (for the sake of clarity, I played Shining Pearl) are remakes of the fourth generation of Pokémon games that were released on the DS in 2007. Unlike the original games, however, this Switch edition isn’t developed by Game Freak. Instead, ILCA have been given this task, because Game Freak are busy with some other silly game.

Much like the DS entries (and most Pokémon games, to be fair), you take control of some kid who’s catapulted into the world of Pokémon training when they’re forced to defend themselves from a savage feral beast attack from a level 2 Starly! Naturally, you then need to travel all over the region of Sinnoh, collect all eight gym badges, while simultaneously stopping some loon from using a very suggestive looking Pokémon to destroy the world.

The plot is standard Pokémon fare, so instead of giving my thoughts on that, I’m going to address the elephant in the room when it comes to these games. When this game was revealed, it garnered quite a bit of backlash because, as far as the overworld goes, the game uses deformed chibi models, which horrified a lot of people who were expecting it to adopt the style that Sword and Shield used. Well, I’m just going to have to come out and say it, I don’t mind the art style choice, I think it’s cute. Although when the game decides to zoom in really close for cutscene purposes, it looks less cute... 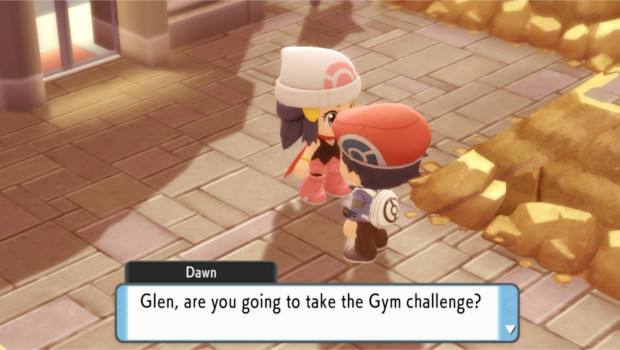 No, that's too close! Back it up, camera!

It doesn’t help that the battles do look like Sword and Shield, so you’re constantly swapping between chibi overworld and more realistically proportioned battle land. I can only imagine this was an effort to recreate how the DS titles did it, and maybe some deadline issues, but more on that in a bit. Anyway, no matter what you think of the graphics, there’s no denying that the water is drop dead gorgeous! It’s the kind of water that just makes you want to take a picture to show off on Miiverse and comment on how good it is!

If you’ve played Pokémon, you should already have a good idea on what to expect here. If you’ve played the original DS games, then you should really know what’s coming. This is easily the most faithful a Pokémon remake has ever been to the source material, and to be honest, this rubs me up the wrong way. Half of the appeal of a Pokémon remake is that it gives me the opportunity to revisit an old game with the mechanics of a more modern Pokémon title, and some of that is there, the fairy type being the most obvious thing. But there’s no Triple Battles, Mega Evolutions, Z-Moves, or Dynamax. OK, sure, no Dynamax is a silver lining for me, but the rest of the stuff could’ve helped to differentiate these from the originals. As it stands, there’s nothing that truly jumps out as a twist on an old title.

What annoys me even more though, is that these remakes are specifically based on Diamond and Pearl. This annoys me because those games got a third version, Platinum, which were an all-out improvement. Outside of one tiny little reference and an outfit that will become unavailable in February, none of the features from Platinum show up in these remakes. The regional Pokédex only has 151 Pokémon, Giratina is barely there, and the Battle Frontier fans out there continue to get shafted as the series continues to ignore it. There is added content, mind, but it just amounts to being a way to catch some legendary Pokémon and some rematches with Gym Leaders. Oh, and don’t expect any Pokémon from the fifth generation onwards, because they might as well not exist. It all gives the impression that these remakes just aren’t living up to their full potential. 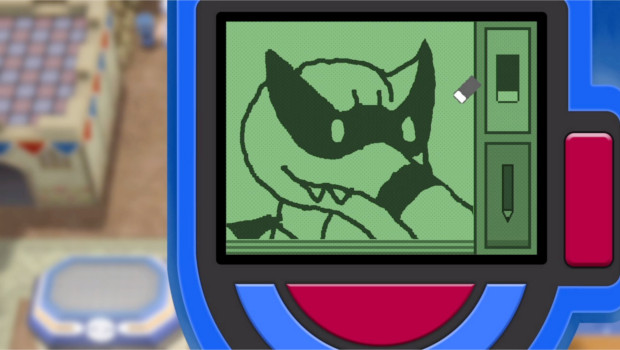 Well, if they won't put Krookadile in this game, I'll do it myself!

Looking back on what I’ve typed so far, it all sounds very much “doom and gloom”, but don’t mistake me, these are fun games, but that’s mostly because the original Diamond and Pearl were great games. Sinnoh is still a fun region to explore, Pokémon training is still as enjoyable as ever, and if you ignore Platinum, these remakes are the better ways to play it. But I’m a massive Pokénerd, and I can’t ignore Platinum, it’s one of my favourite games!

And yet, there’s still more that I don’t like about these remakes, and it concerns the difficulty. Yeah, yeah, I know, Pokémon games are never difficult, but that’s precisely it. These remakes are the most difficult a mainline Pokémon game has been. The average trainer is easy to deal with, but more important trainers, such as your rival and Gym Leaders, utilise competitive move sets, stat builds, and hold items to become legitimate threats. You’ll need some actual strategy to get through them. Well, that is, if it wasn’t for the EXP Share.

EXP Share in the more passive form it currently takes is one of those quality-of-life features that was introduced in the 3DS titles, it allows all your Pokémon to get experience from battles, regardless of whether they took part or not. It was neat, it provided a way to speed up the process of training for those who found things a bit too tricky, but the key point was that it could be turned off, allowing those who wanted a more challenging experience to get exactly that. But then, Let’s Go decided to take away the ability to turn it off. And you thought I mentioned that game at the start just to throw shade on it. 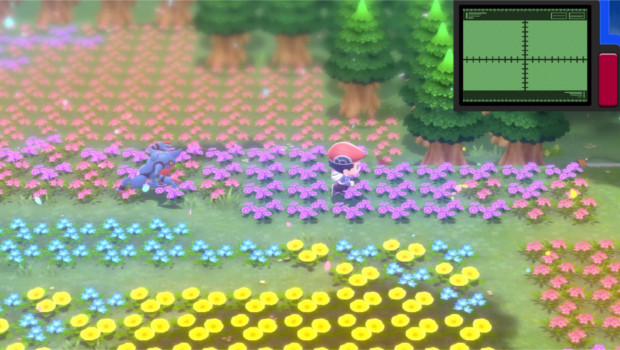 Being chased by a poison frog monster wouldn't be so bad, but flowers are where I draw the line!

All those tweaks to make the important battles more challenging are completely cancelled out by the fact that, by the time the third gym rolls around, you’re going to be ten levels higher in comparison, cool Gym Leader strategies aren’t much use when you can easily steamroll the competition. And just to make sure you really have little chance of losing, you’ll get various unfair advantages as your Pokémon grow to like you more, such as being able to shrug off status effects, or survive a potential knock-out blow with one hit point left randomly. You could argue that you can counteract this by avoiding fights and shoving bitter herbs down your Pokémon’s gob to make them hate you, but that’s just annoying to keep track of, not to mention that the post-credits content is locked until you see all 150 Pokémon. The best way to do that is, you guessed it, fight everyone on your way. The mandatory EXP Share and finding every Pokémon are counter-intuitive to keeping your power in check.

Despite that, the Elite Four did give me some trouble. Thanks to the spike in levels they have, they were around the same level that my team was, so their competitively trained Pokémon were finally given a chance to shine against my slapdash approach to team building in an average playthrough. It took three losses before I managed to squeak out a victory, and it was the most fun I had in the entire game! 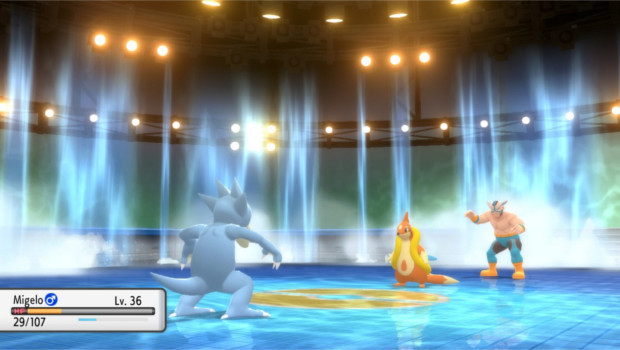 Some serious leakage problems in this place.

But that small, shining moment doesn’t do much to dissuade the many issues plaguing this game. Tight deadline schedules have been plaguing Pokémon games for quite a while now, features must be cut, and shortcuts must be taken to make the unmovable release date that I suspect the Pokémon Company sets long in advance. ILCA may have been thrown in at the deep end with this, and it shows. The game needs a hefty update patch to even have the proper soundtrack, or a credits sequence. It’s not much of an issue for digital players like me, but if you’re planning on getting the physical version to save storage space, well, it sucks to be you. You'll still need to download this update to get the full experience.

And even after this update, features are still missing. The Union Room, a place to interact with other players, only supports up to two people, and the ability to put your Pokémon up for trade online for a specific one you’re looking for is missing in action as well. The leaderboard feature is also due to be added in a future update. It just feels so hastily put together and sloppy. And even after the day one patch, these still might be the buggiest games since Red and Blue. Many, many glitches have been found since release, and it makes the game look quite shoddy. Compile that with the many minor annoyances that I encountered, such as the analogue movement clashing with the tile-based overworld to cause you to get caught on the corners of terrain far more often than is acceptable, and you’ve got my least favourite Pokémon remake that I could stomach completing.

But all that said, it’s still Pokémon Diamond and Pearl, and they are still particularly good games in their own right. Exploring Sinnoh is just as good as it's always been, with tight level design, clever puzzles, and a healthy amount of things to find for the player that backtracks after getting certain hidden moves. It's also quite open in that regard, and doesn't bog the player down with incessant cutscenes. It's the kind of respectful game design that you don't see much in RPG's these days, especially Pokémon itself.

These remakes may be far too faithful for their own good, but at least they’re faithful to a great game. Which leads me to the tricky task of scoring this game. 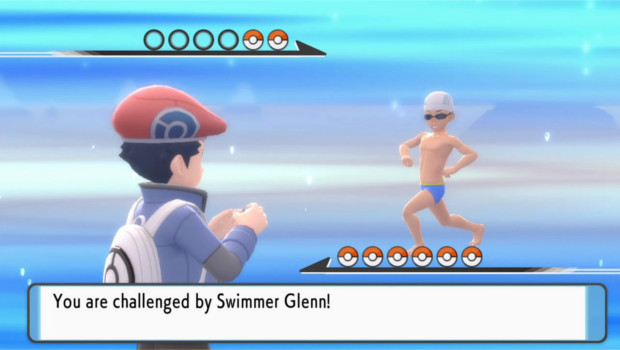 As someone who’s played the originals, these remakes fail to live up to my expectations, but the base game is so solid, that I would recommend them to those who never played the originals and can’t get a hold of Pokémon Platinum on the DS. The score, therefore, is a compromise between these two demographics.

The foundation of these games still holds up
The battle scenes look so nice
The tweaks to more important fights are a pleasant surprise
Just look at that water!

The improvements from Platinum are mostly ignored
Boy, that overworld is proper divisive
Mandatory EXP Share ruins any semblance of challenge these games may have had
The game needs a hefty update to even function properly...
...And even so, it’s quite buggy

If you’ve played the original DS games, then you should really know what’s coming. This is easily the most faithful a Pokémon remake has ever been to the source material, and to be honest, this rubs me up the wrong way.