After Pokémon Let’s GO continued the trend of Pokémon remakes by pointlessly remaking a remake, I can imagine a lot of people were expecting that the DS games, Pokémon Diamond and Pearl, were up next. Secretly though, a little part of me was hoping they’d remake a certain other game in the franchise that had been released before hand. And as if to further prove that I’m being spied on by The Pokémon Company (Shut up, they are. I’m not paranoid!), my hopes came to fruition with this remake of the first Mystery Dungeon games.

For those of you unaware, Pokémon Mystery Dungeon: Rescue Team DX is a remake of the GBA’s Red Rescue Team and the DS’s Blue Rescue Team. It’s a roguelike game that asks the player to travel through randomly generated dungeons, using limited resources to avoid getting beaten up and unceremoniously thrown out minus all the stuff they were carrying. These particular games were first released in 2006 and went on to become the highest selling retail spin-offs in the Pokémon series to date. I put it down to the appealing setting, the general higher difficulty compared to other Pokémon games, and surprisingly good story.

The game takes place in an alternate universe that is only inhabited by Pokémon, where humans are nothing more than legend. You play as a human who has been transported to this world and subsequently transformed into one of 16 Pokémon. Which Pokémon you become is determined by a personality quiz, but if you don’t like what you are given, you can choose for yourself. You then choose a partner to feature, then start the game.

It sounds weird to anyone who has played a mainline Pokémon game, but the plot is quite prominent in this game. I won’t go into too much on details, but it goes places that you wouldn’t really expect a Pokémon game to go and can become a little dark at times. The thing is, since the original game was released, Pokémon Mystery Dungeon has gone on to release 3 more entries, all of which have better plots than Rescue Team. So going back to this, I couldn’t help but realise that this story is quite simplistic in comparison. This remake is incredibly faithful to the original dialogue (Even having the same minor typo that was present in the original), so not much will feel new if you’re already familiar with the story. It still has its moments and is sure to be entertaining for any newcomers to the series. 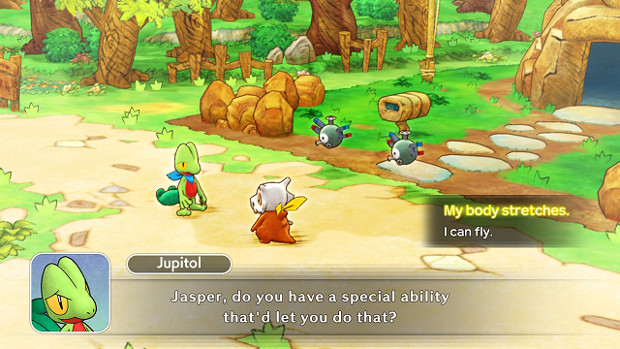 One of the things that do feel new is the actual dungeon exploration. Of course, the basic mechanics are still there, each floor is randomly generated and you need to find the stairs on each one to progress. Along the way, you’re bound to find other Pokémon that want to punch your face in, so you have to use the moves and items at your disposal to survive. As well as this, the Pokémon you’re controlling will get hungrier over time, and if you get too famished, you’ll rapidly lose HP. Item management and strategic thinking are the name of the game, as everything is turn-based, it’s normally a good idea to stay still at times to think about your next move.

The new stuff comes from more modern mechanics taken from the 3DS title Pokémon Super Mystery Dungeon. This results in a slightly higher difficulty than the original games because of the tweaked moves and the expanded movesets each Pokémon has. You’re going to hate Bug Bite because of this game. Quality of life improvements also serve to differentiate this remake, such as a larger item capacity which steadily improves as you increase your team’s ranking, the mechanic from the 3DS titles that lets you level up your moves by using them repeatedly, and the ability to switch which Pokémon you’re controlling in the middle of a dungeon, to name a few. The game generally flows better than the original versions and I can’t really recommend playing them over this Switch version any more, which is the sign of a good remake.

I should mention that there’s an “Auto Mode”, which lets the AI take over with moving your Pokémon until you run into an enemy. It’s fine and all, but later on, you might find yourself running face first into ranged attacks, so show some caution with relying on it. As well as that, there’s an “Auto Attack”. When you’re near an enemy, you can just tap A and the game will automatically use the move it determines to be the most effective. I’m not so keen on this feature. Later on in the longer dungeons, you’ll want to think about whether you should use your best moves so often or save them for more dangerous enemies. Auto Attack encourages lazy thinking and you’ll be better off getting in the habit of holding ZL and selecting a move from the quick menu that pops up. It doesn’t take long at all and I find it strange that Auto Attack is a thing at all. 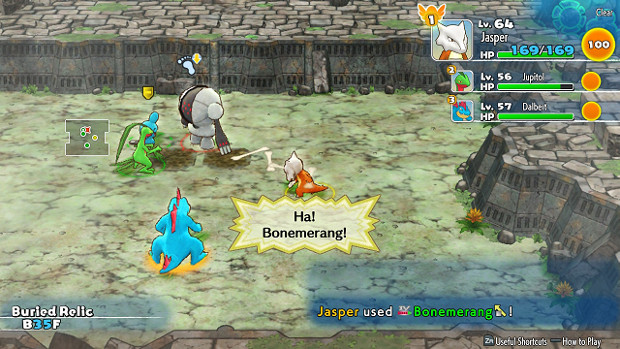 Trust me, Bonemerang is so good, you can mostly ignore type matchups.

Of course, it’s a Pokémon game, so collecting Pokémon is going to be part of the appeal in some way. In this game, when the Pokémon you’re controlling lands the finishing blow on an opponent, there’s a chance that the Pokémon you just beat will want to join your team. Accept their offer and they’ll help you out for the rest of the dungeon. Finish the dungeon (Or use an Escape Orb) without letting that Pokémon faint and, provided you have the right Friend Camp for them to live in, you can keep that Pokémon and use them in future excursions. While you can only bring three Pokémon into most dungeons, through recruiting Pokémon, you can end up with a veritable conga line of 8 Pokémon helping you out. There’s a bit of random chance to recruiting, but as you progress, you’ll discover a number of ways to skew the odds more in your favour.

The game features the first 386 Pokémon from the first 3 generations of Pokémon, just like the original game, but any Pokémon that got an evolution or baby version of it in the DS games also get them here (For example, Electabuzz can evolve in this version). Apart from them, Riolu and Lucario are also available to recruit. That’s mostly a cheeky reference to the fact that Lucario was a cameo appearance in the original games. See? How many reviews have you read of this game that knows that nerdy detail? None of them, I bet. I do wish they had thrown in some newer Pokémon to help some fans of the original have something new to discover. But there’s already plenty to do in this game, especially if you stick around after the credits. 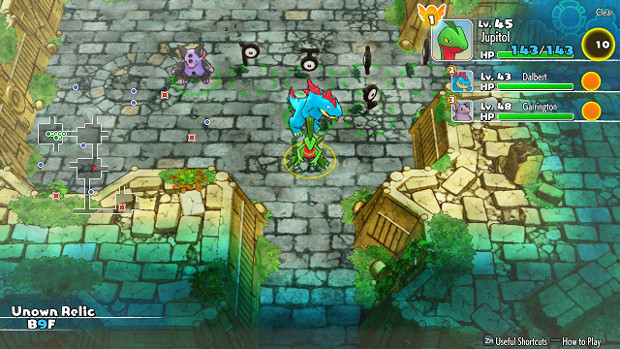 5 Unowns backing me up? I call it "Formation: Alphabet Soup"

IQ Skills from the original game are nowhere to be found here, instead, your Pokémon can gain “Rare Qualities”, passive abilities that affect your whole team. Each Pokémon can only have one, so you’ll have to figure out which one would benefit you the most. Although you can always change them by feeding the Pokémon gummis.

When you’re not progressing through the plot, you can accept jobs, which normally involve you travelling through a dungeon to find a Pokémon that has gotten lost in there. Finishing these gets you items, money, and rank points, which go toward increasing your rank and getting the sweet bonuses that come with doing so. If you have an online subscription, you can even rescue other players who have gotten wiped out in a dungeon and save them from losing all their items and having to start again. I can imagine people feeling good about knowing they’re helping another player and getting rewarded for doing so, and is a feature that I very much enjoy. If you don’t have a subscription, you can still use passcodes to do the same thing, share that code if you need help and one of your friends can pull off the rescue without needing to go online. Considering that servers will inevitably go down some time in the future, this can help make this feature live on indefinitely, which is remarkable forward-thinking on Chun Soft’s part.

With all that said, the Pokémon Mystery Dungeon series has a problem in general with its gameplay and it’s no different with this one. You’ll basically either really like the cycle of travelling through dungeons, or find it really repetitive and get bored with it. I know this is strange for a review to say, but I can’t really tell you whether it will appeal to most people, it truly is a Marmite affair. Luckily, there is a demo available, so it might be worth giving that a go, it ends before anything even remotely difficult comes your way, mind. I also noticed that when a lot of Pokémon are on screen at once, the frame rate starts to decline a bit. It’s a turn based game, so it’s not too detrimental on gameplay, but it is noticeable when it happens. There’s also some strange frame skipping now and again, which isn’t great. Minor things, really, but I should point it out.

I’m sure you’ve probably noticed from the screenshots above, but this game is truly spectacular-looking in the visuals department. Opting for a watercolour painting aesthetic, Rescue Team DX makes the Air Continent look really pleasant to look at. Shadows even have a hatching style of shading to sell the painting look even more. It’s the closest that one of these games has looked to the artwork that shows up on the Title Menus of the series (This particular Title Menu even has an aptly named “Admire Illustration” button, which sounds really funny). I’m a real sucker for games with art styles that look closer to drawings than real life and I’ll say it: it looks better than Pokémon Sword and Shield. I can’t say I noticed many differences between docked and handheld mode, but they both run well enough. 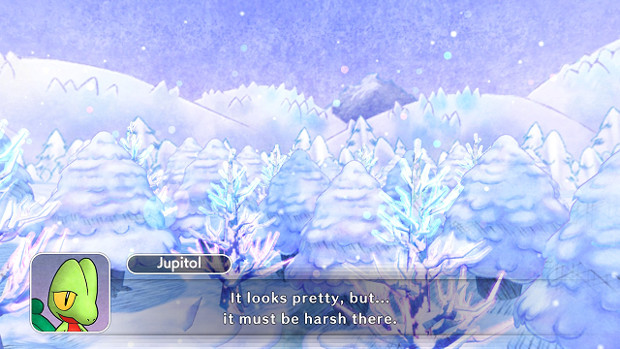 Stop trying to do the review for me.

The soundtrack is no slouch, either. I mean, the original soundtrack was already great, but thanks to the remixes in this game, you can finally enjoy the spectacular music of Rescue Team without the Game Boy Advance’s sound limitations. I did notice that the songs in this version tend to utilise some of the sounds you’d hear in the GBA version, which is a real nice touch. Hey, if it’s good enough for the Link’s Awakening remake, why not use it here?

Rescue Team DX is the rarest of things these days. A Pokémon spin-off game that isn’t on mobiles and filled with microtransactions. That’s reason enough to applaud it, but it’s more than that; it’s a solid game that looks great and provides something different than the usual Pokémon fare that a lot of fans would be used to. The gameplay needs to click for you to get the most enjoyment out of it, but if it does, you’ve got something very special here. 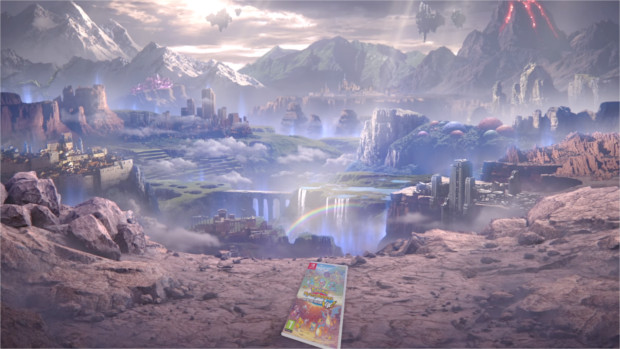 The Roguelike genre is never going to appeal to everyone, but if turn-based dungeon exploring with Pokémon sounds appealing to you, then Rescue Team DX is an amazing first step into the series.

One of the things that do feel new is the actual dungeon exploration. Of course, the basic mechanics are still there, each floor is randomly generated and you need to find the stairs on each one to progress. Along the way, you’re bound to find other Pokémon that want to punch your face in, so you have to use the moves and items at your disposal to survive.